Although it has not been described in other gemological literature, some Color Change Garnets can show up to four different colors under visible light (as opposed to UV light) depending on the type of visible light applied. An example is the Color Change Garnet pear pictured below. This gem changes from purple (daylight) to gray (fluorescent light) to green (white LED light) to pink (incandescent light).

We classify this extreme example as a Color Change Garnet, but it could also be classified as a rare example of Spessartine Garnet that is chromium-bearing. The presence of chromium enables the color change.

Chromium can be detected in this gem as red fluorescence under blue laser light (405nm), and chromium is also clearly detected with a spectrometer. Fluorescence in Garnets is usually restricted to the two allochromatic species Pyrope and Grossular, and as far as we know, fluorescence in idiochromatic Spessartine has never been reported. A similar example of chromium-bearing Spessartine from Madagascar that showed color change was reported in 2002 (Schmetzer, et. al. 2002), but no fluorescence in that gem was reported.

The seven Color Change Pyropes shown in the above photo are ordered from left to right to show increasing magnetic susceptibility due to increasing Spessartine content. Because most colors are controlled by low concentrations of chromium/vanadium rather than progressively higher concentrations of Spessartine (manganese), there is no predictable graduation of color. The measured refractive index range for Color Change Pyropes is R.I 1.742-1.768, and the magnetic susceptibility range is SI 14.45- 24.53. Broader R.I. and SI ranges are seen for Color Change Spessartine gems, with ranges of RI 1.751-1.792 and SI 24.35- 41.79.

Blue Color Change Garnet: A striking color change from daylight to incandescent light is seen in the .86 ct blue Color Change Garnet from Madagascar pictured below, which changes from blue to pink. This contrast between colors is just as impressive as the color change seen in the finest Alexandrite Chrysoberyl. Below right, we see that the blue body color is enhanced when viewed under cool LED light.

Not all Garnet varieties along the Pyrope-Spessartine join are Color Change Garnets. Other hybrids of Pyrope and Spessartine that may not show color change include Pastel Pyrope at the low end, Malaya in the middle, and orange Spessartine at the high end. But Color Change Garnets show the most diverse range of daylight color and incandescent color. Varying amounts of manganese (Spessartine) mixing with small amounts of iron, chromium, and vanadium, result in a rainbow of colors including blue, green, purple, brown, yellow and orange. With the exceptions of blue green and some purple gems, color tone tends to be light or pale. The 3 gems pictured below are shown in daylight.

In our study of Garnets, we have found examples of the phenomenon of color change within every gem Garnet species except Uvarovite. In addition to the Garnets that are classified as color change by gemologists, color change can also occur among Almandine, Spesssartine, Andradite, Grossular, and Pyrope (Malaya and Pastel Pyrope varieties). However, the variety name “Color Change Garnet” is generally reserved for Pyrope-Spessartine Garnets, which at times show the most definitive color change. With compositions that fall along the join between Pyrope and Spessartine in the Pyralspite ternary,  we see a nearly continuous isomorphic replacement between Pyrope and Spessartine. This researcher has tested Color Change Garnets with compositions ranging from a low of 30% Spessartine to a high of 89% Spessartine.

Chromium/Vanadium in Relation to Manganese

In our study, blue Color Change Garnets from Tanzania such as the 0.74ct gem pictured below show less of a complete change in color than do blue gems from Madagascar. The Tanzanian gems change from from blue in daylight to purple rather than to pink in incandescent light. 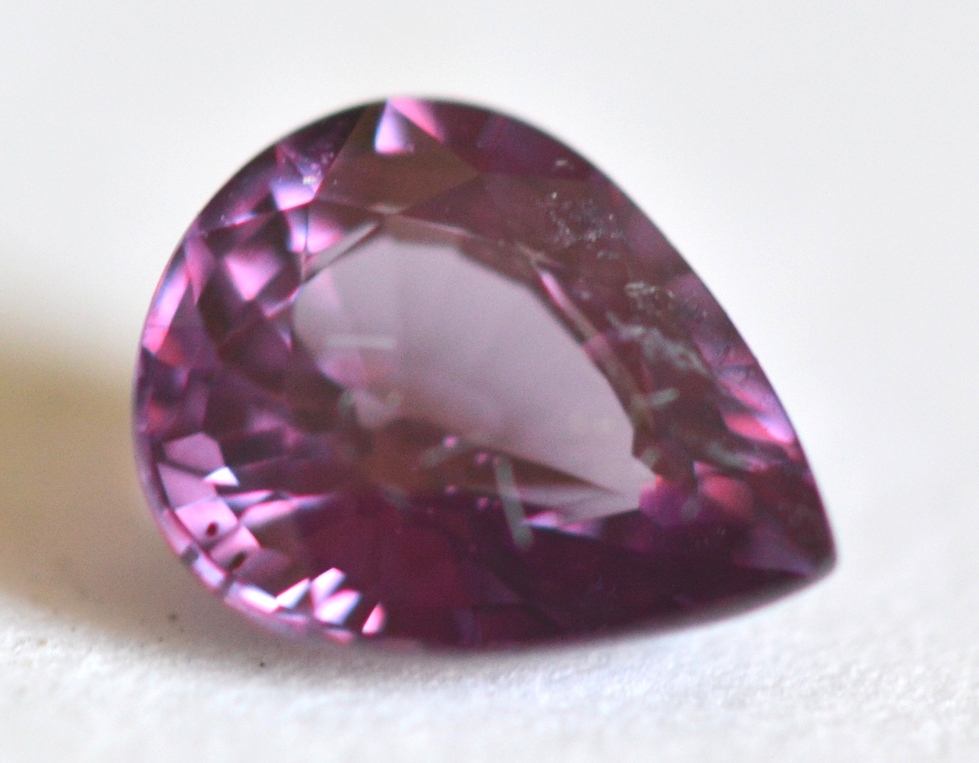 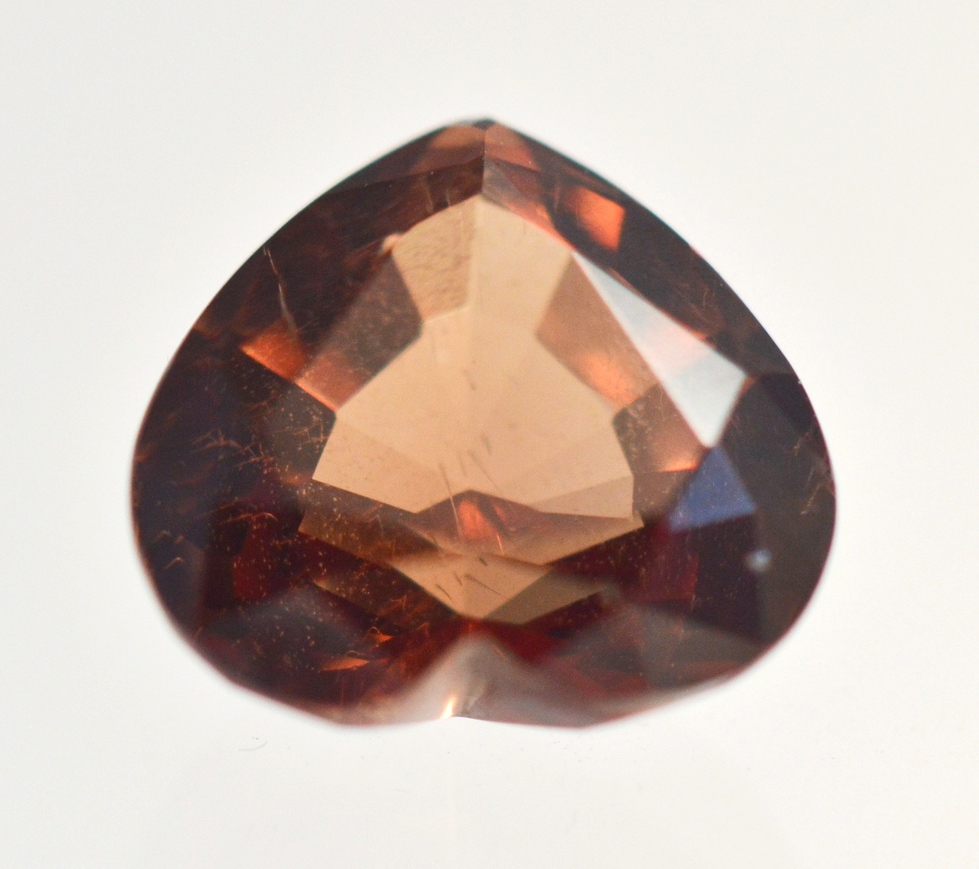 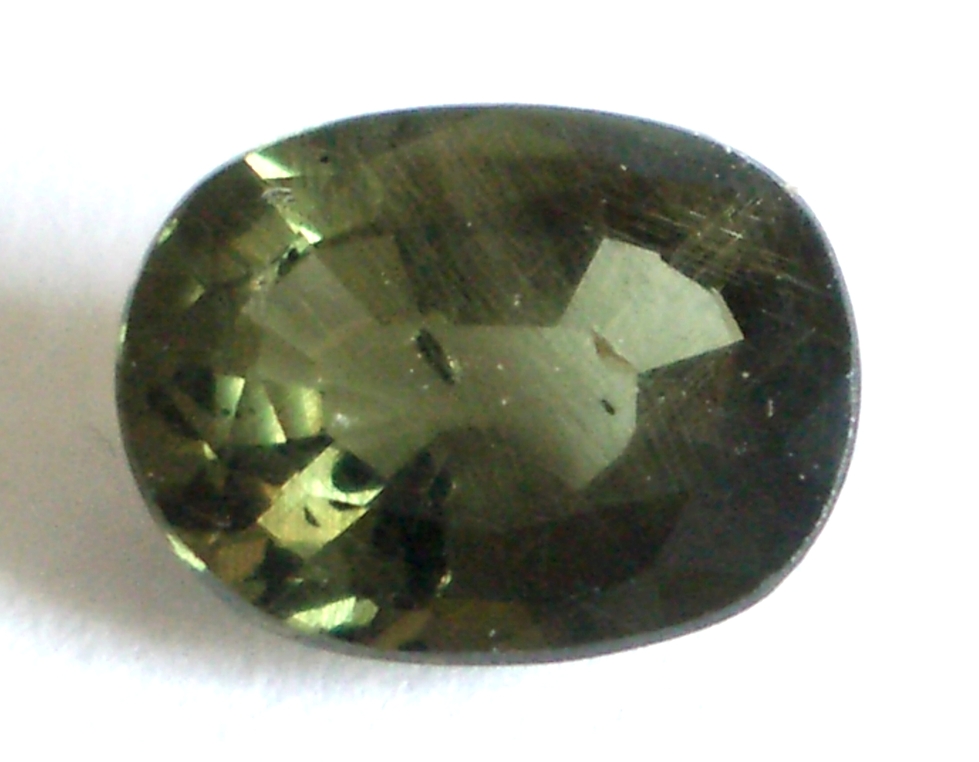 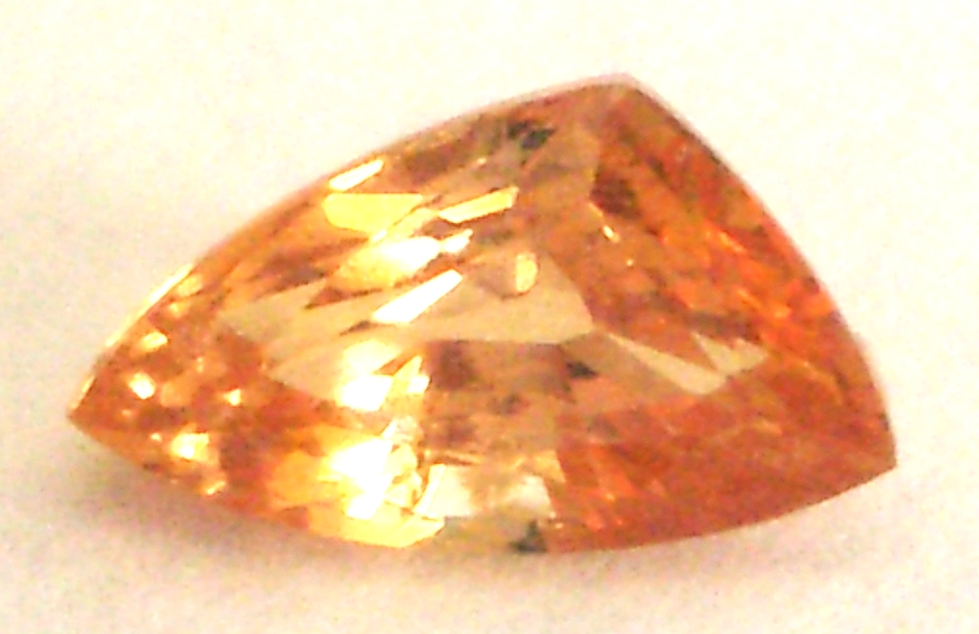 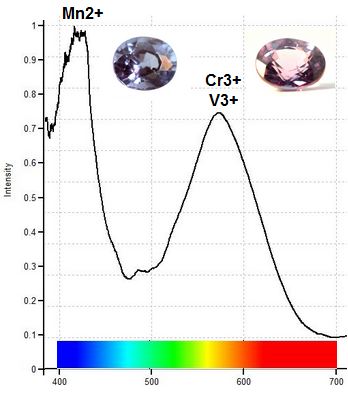 Although green Garnet is typically associated with the Ugrandites rather than Pyralspites﻿, green Garnet is occasionally seen as a variation of Color Change Garnet (shown below). The green Garnet trillion below  fluoresces bright red under blue laser light (405 nm) due to significant chromium content.

Two Different Species: The graph below shows compositions for 51 Color Change Garnets of various colors. Some Color Change Garnets, such as the blue Garnet from Madagascar shown above, have plot points that fall to the left of the half-way mark along the Pyrope-Spessartine join, and  therefore have a composition that is primarily Pyrope. These gems can be classified as Color Change Pyrope, a variety of Pyrope.

Gems with cool body colors in daylight (purple, blue, green) show the most dramatic color changes, altering toward warmer colors such as red, pink or purple when incandescent light is applied. Gems with body colors that are already on the "warm" end of the  spectrum (brown, yellow, orange, pinkish orange) show changes that are more subtle, becoming reddish orange or reddish pink in incandescent light. Such changes can at times be difficult to see. The orange Color Change Garnet pictured below looks similar to Spessartine Garnet in daylight.

Fluorescence: Most published gemological resources incorrectly describe all Garnets other than Grossulars as non-fluorescing. In fact, many garnets, including most Color Change  Garnets, show pink to red fluorescence under blue laser light (405nm). Some Malaya Garnets and Pastel Pyropes can also show fluorescence.

Fluorescence in these Pyralspite garnets is related to the presence of chromium, and is permitted by a relatively low concentration of iron. In many cases, the presence of chromium can be confirmed by a red Chelsea filter reaction. In other cases, no Chelsea filter reaction can be seen (as in some brown and orange Color Change Spessartine Garnets). In these cases, only trace amounts of chromium are present, and such low chromium concentrations contribute nothing to﻿ daylight gem color and nothing to magnetic susceptibility. The author suspects that long wave UV fluorescence in many low-iron Color Change Garnets may be quenched by vanadium rather than by iron.