Although not as widely used today as synthetic Corundum, synthetic Spinel is still one of the most common man-made gem materials, particularly blue synthetic Spinel. It appears frequently in class rings and costume jewelry. Blue, green and other colors of synthetic Spinel are mostly manufactured using the inexpensive flame fusion method by which the Spinel develops around an elongated boule. These flame fusion Spinels can be distinguished from natural Spinels by a slightly elevated refractive index due to a chemical variation involving higher aluminum content.

One anomalous blue synthetic flame-fusion Spinel was found to show a weak magnetic response due to manganese (Mn2+). This gem has an unusual bright blue-green or "aqua" blue color, and fluoresces a strong yellow-green color rather than red under longwave UV light, indicating manganese content. The concentration of manganese is likely higher than the concentration of cobalt, overtaking the typical pink or red fluorescence of synthetic blue Spinel.

The purpose of adding manganese to synthetic Spinel is not clear, but perhaps it brightens the blue color by blending in a subtle yellow-green component. This could be similar to what we find in "neon" or "aqua" blue Paraiba Tourmalines that are naturally colored blue by copper and perhaps modified slightly in color by manganese.

Most green synthetic Spinels show no magnetic attraction. The green flame-fusion synthetics shown below contain cobalt (Co2+, blue chromophore) as the primary chromophore in addition to a small amount of manganese (Mn2+, yellow chromophore) to create green color (yellow + blue = green). All 3 gems are diamagnetic. The green synthetic gem in the center mimics the color of rare natural blue-green Spinel, but a lack of magnetic attraction separates this synthetic gem from its natural counterpart. The left and center gems below fluoresce pink under longwave UV light due to cobalt content. All 3 gems fluoresce yellow under shortwave UV light due to manganese content.

This concludes the section on color and magnetism in Spinel. For a list of the reading materials about Spinel referenced in this section, see the Spinel References section at the bottom of the Resources and Links page. To continue on to the Tourmaline pages, go to Tourmaline.

is Magnetic Due to Manganese

The yellowish green synthetic flame-fusion Spinel shown below (left) is colored only by manganese in relatively high concentration, and it shows a strong magnetic response due to the manganese. It also fluoresces bright yellow/green under UV light. The "olive" green synthetic flame fusion Spinel on the right has a low concentration of manganese and shows a diamagnetic response. It fluoresces yellow only under short wave UV light. Among natural Spinels, gems with yellow or yellowish-green body color and green fluorescence are known to exist but are are extremely rare. Like synthetic yellow Spinel, natural yellow Spinel has been found to fluoresce green under UV light due to manganese.

Fluorescence: Blue synthetic flame fusion Spinels with unusually high manganese content fluoresce green under both long wave and short wave UV light. Blue flame fusion synthetic Spinels with relatively high cobalt content fluoresce pink or red under long wave UV light due to cobalt, and fluoresce yellow/green under short wave UV light, presumably due to a minor amount of manganese. Because of the quenching effect of iron in natural Spinels, pink/red UV fluorescence from cobalt is difficult to detect, except in the rare Cobalt Spinel. However, we find that most natural blue Spinels show some pink of red color under a Chelsea filter due to cobalt.

Blue Spinel gems manufactured by the slower and more costly flux-grown method have a vivid blue color due to high cobalt content. They are generally small in size, faceted from small synthetic crystals that are shaped like natural octahedral Spinel crystals, as opposed to the large rounded boule shapes of flame fusion Spinels. Because the major chemistry is the same as natural Spinel, the refractive index range is also the same. While the common flame fusion synthetic blue Spinels are almost always diamagnetic, flux-grown blue Spinels are weakly magnetic, most likely due to their higher cobalt content. This is the only gem material of any kind that we have found that shows magnetic attraction entirely as a result of cobalt. No iron or manganese can be detected.

Blue flux-grown synthetic Spinel could be mistaken for natural Cobalt Spinel, as both have the same strong blue color, the same refractive index, and both show weak magnetic attraction. However a moderate to strong magnetic response in any vivid blue Spinel would indicate iron content and natural origin. Fortunately, flux-grown blue Spinels are rarely found as a gemstones because they are time-consuming to produce, costly, and small in size compared to flame fusion Spinel gems. Blue flux-grown Spinels do not fluoresce as brightly under long wave UV light as do dark blue flame fusion synthetic Spinels, and we speculate that this is possibly because of concentration quenching produced by a higher concentration of cobalt. 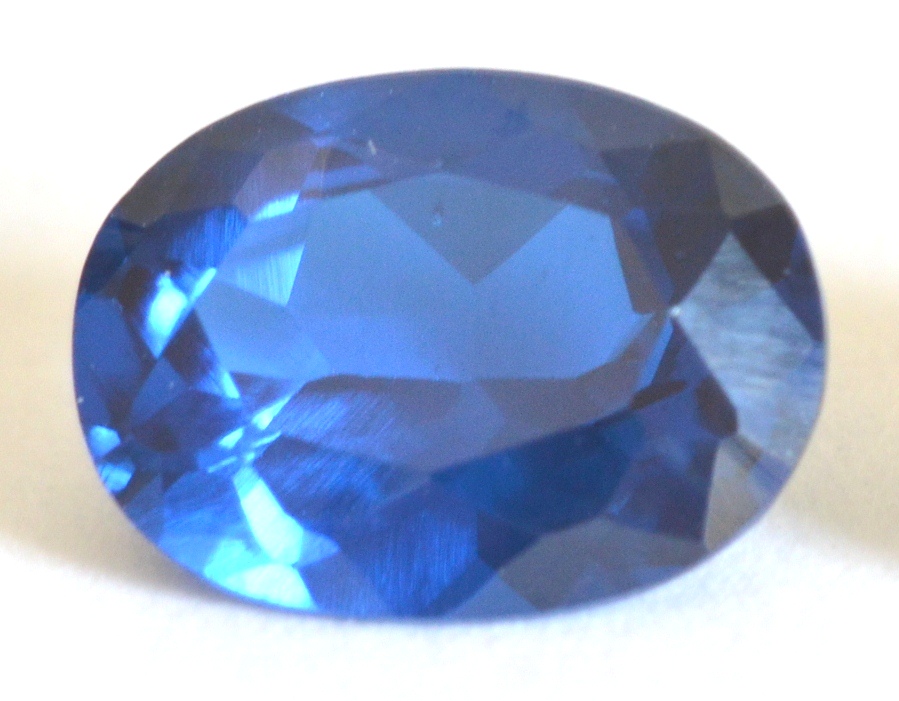 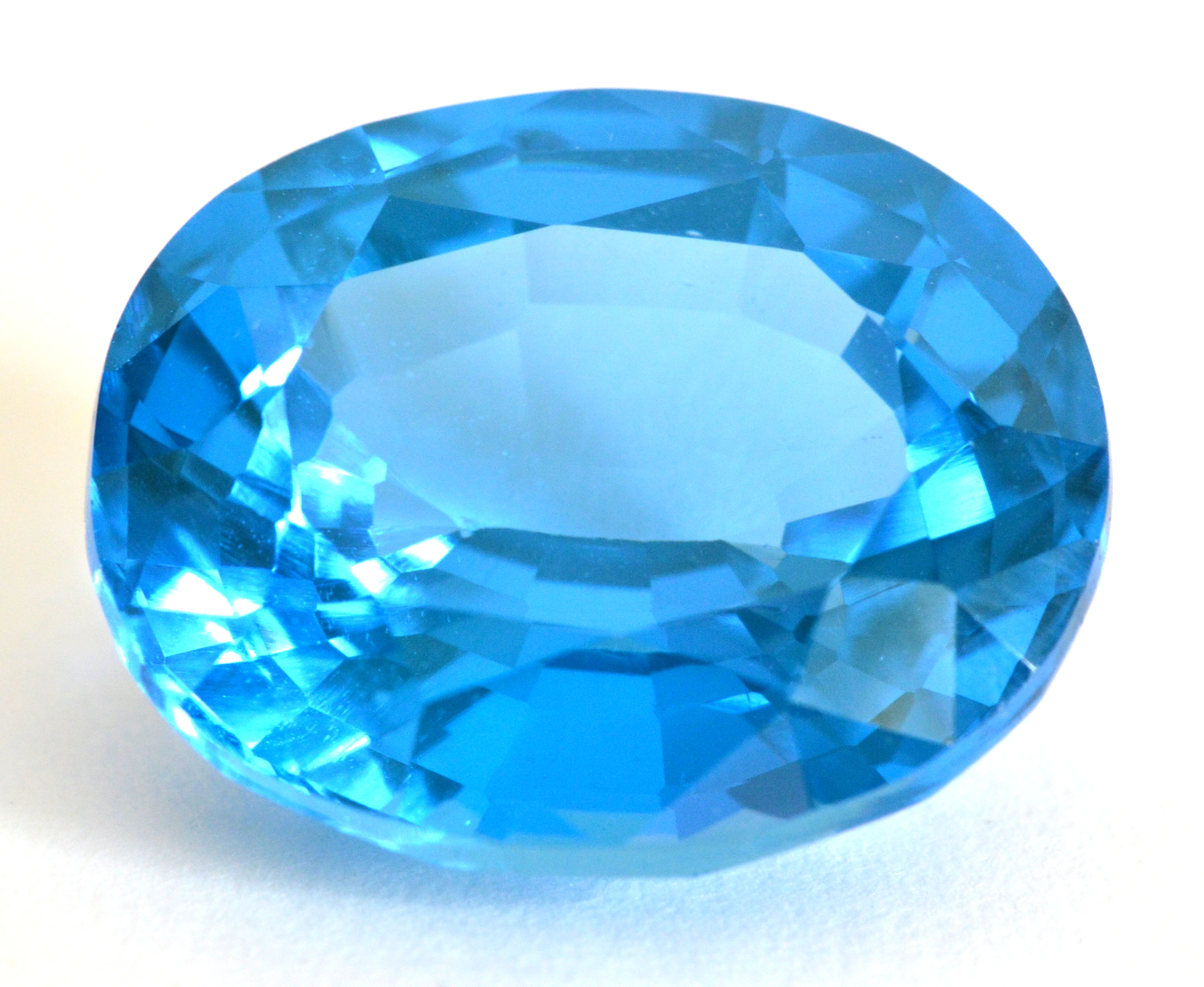 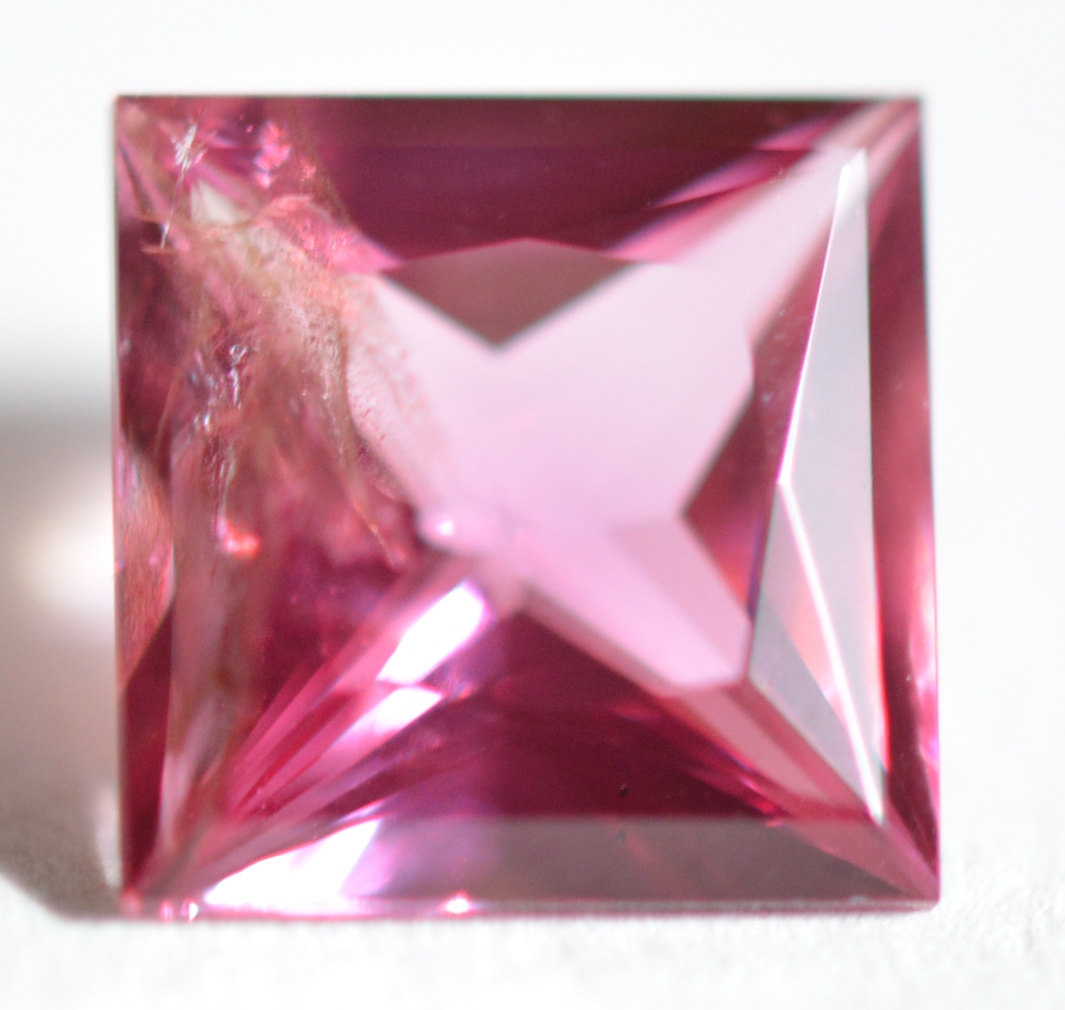 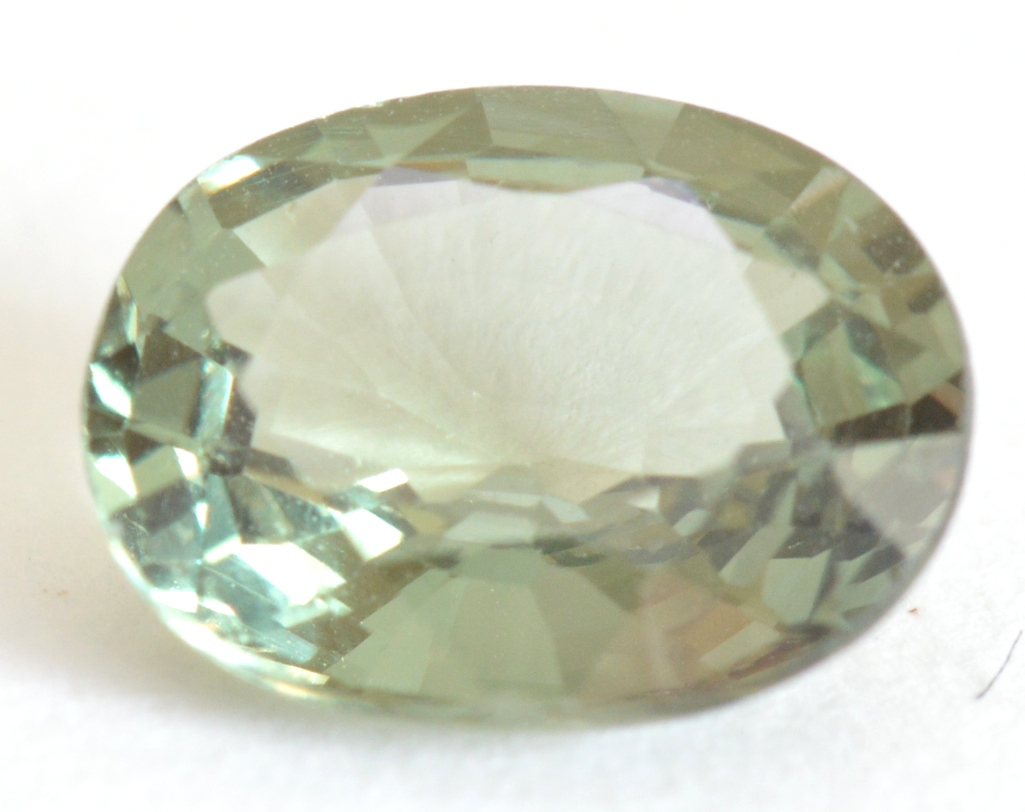 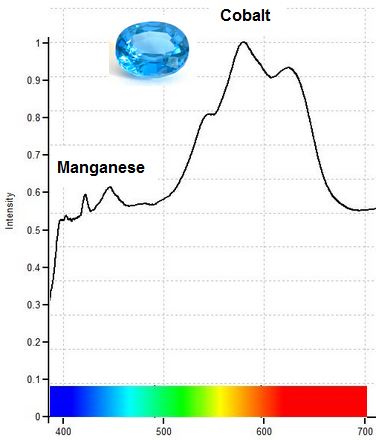 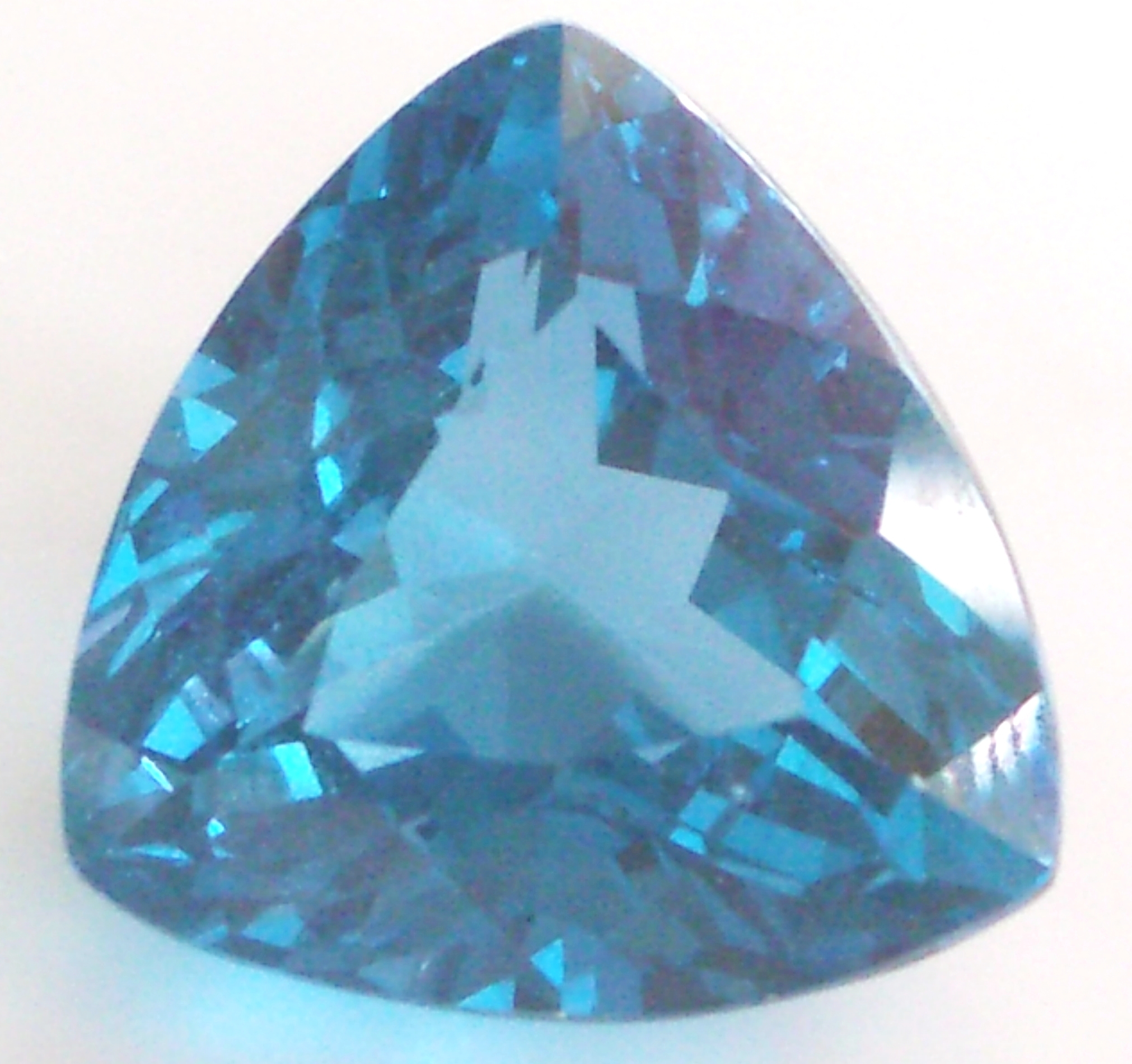 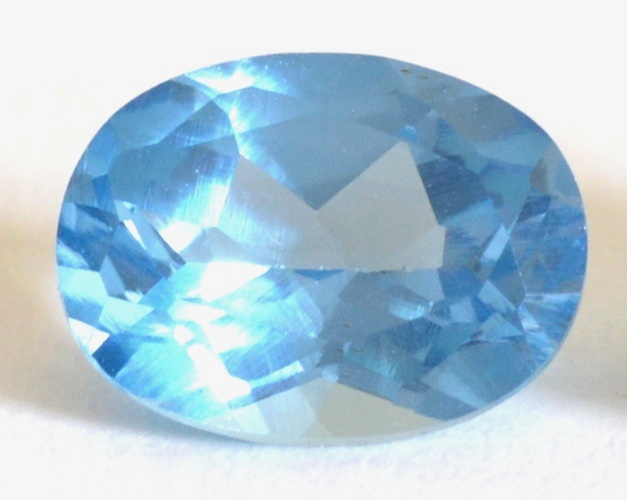 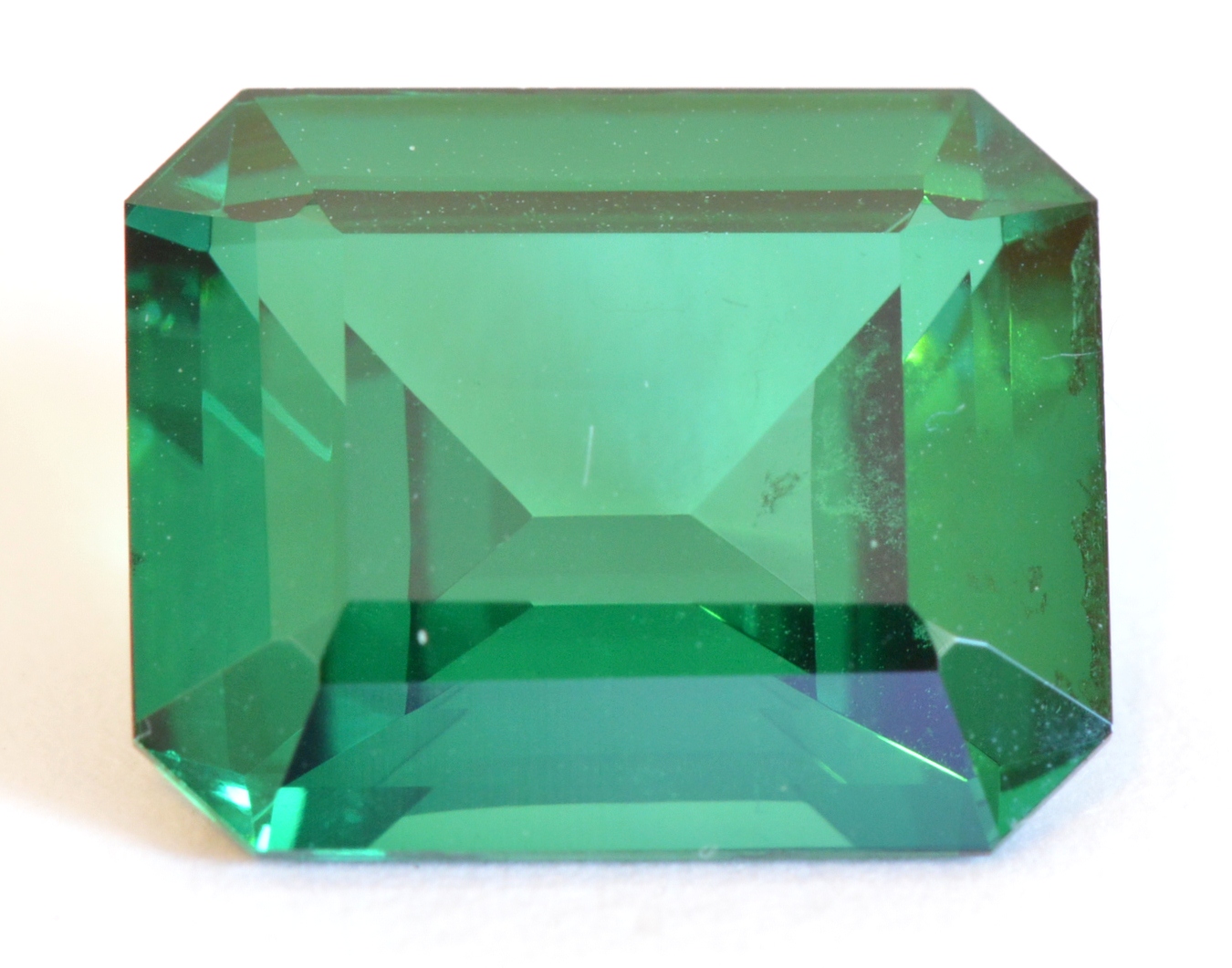 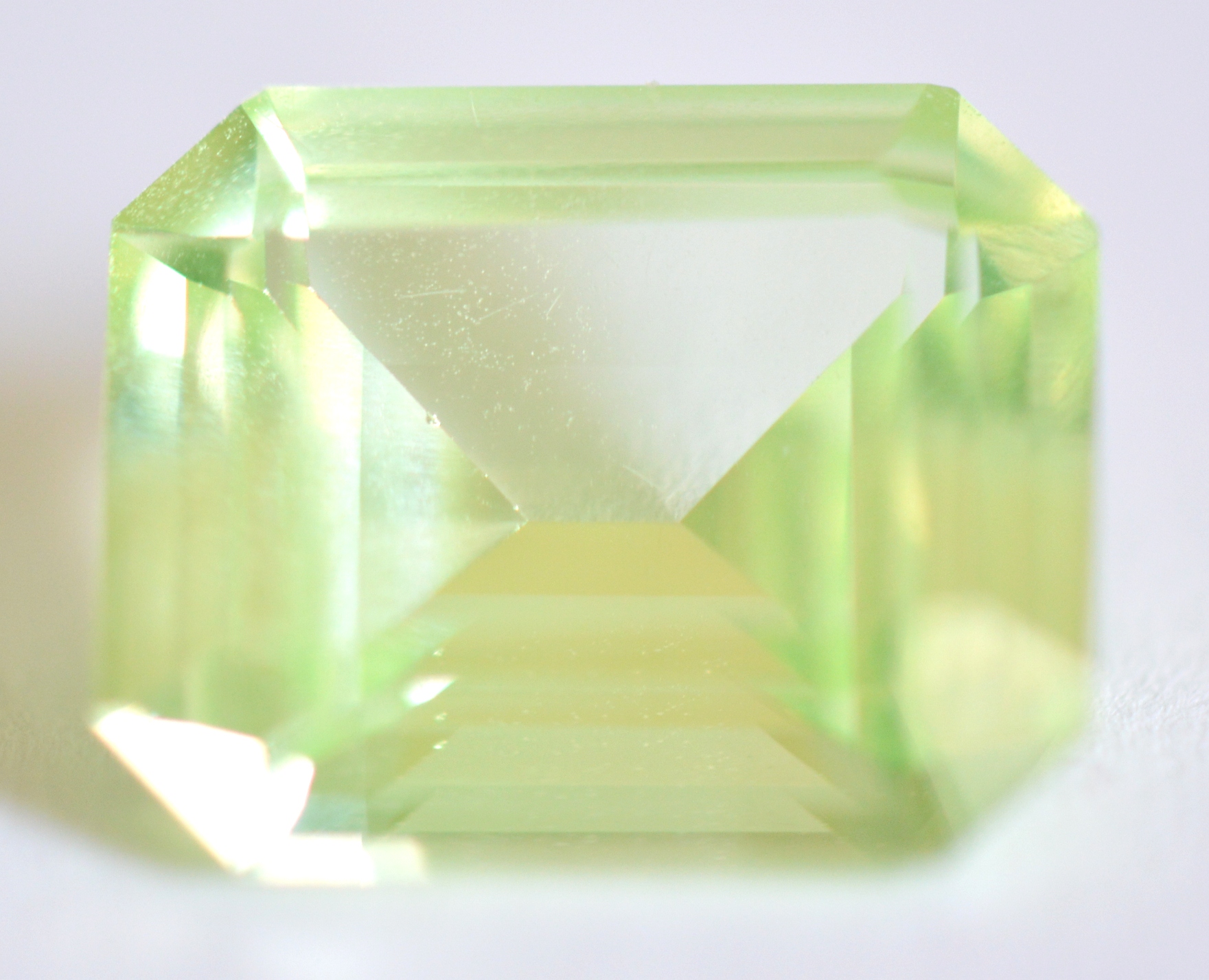 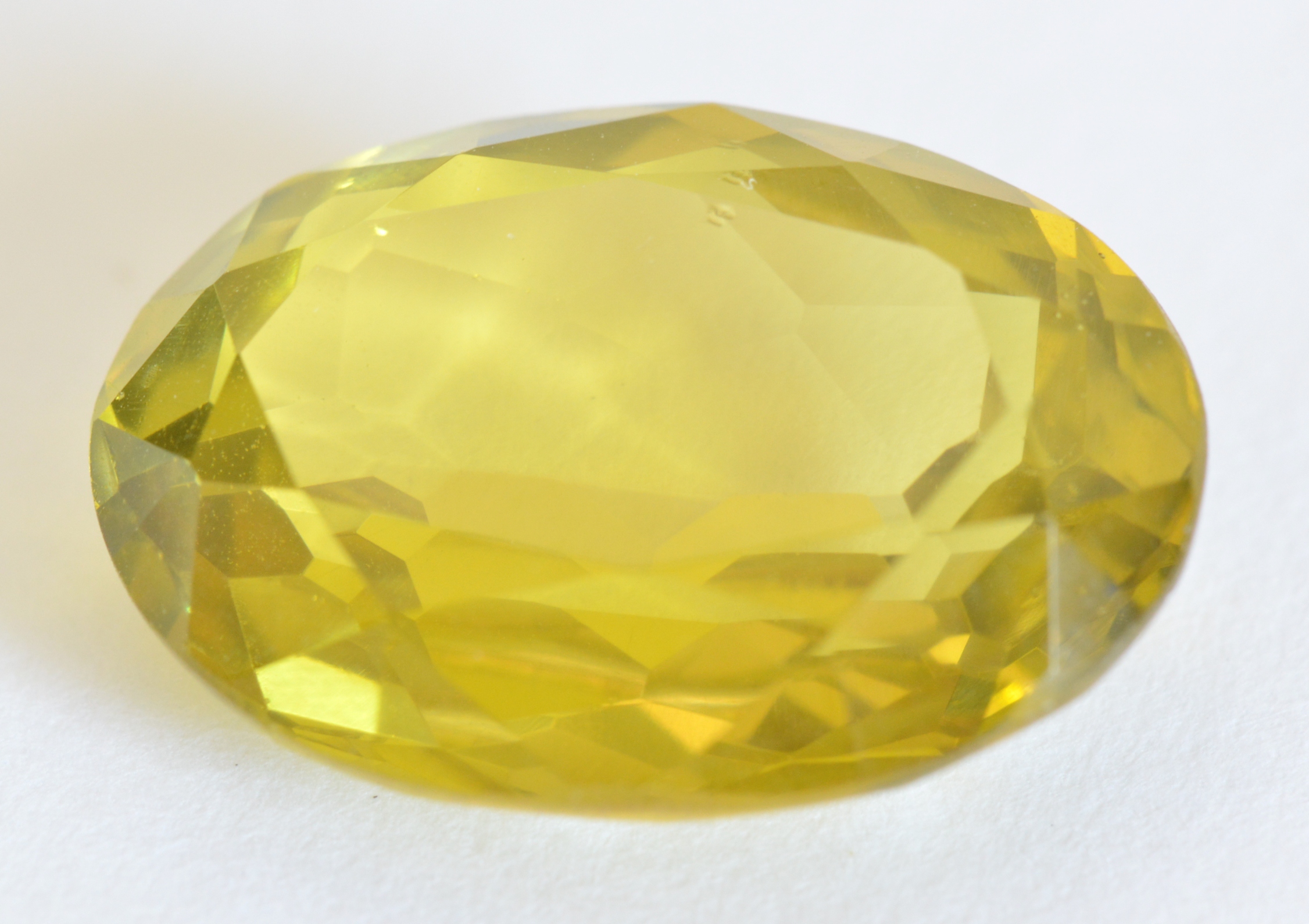 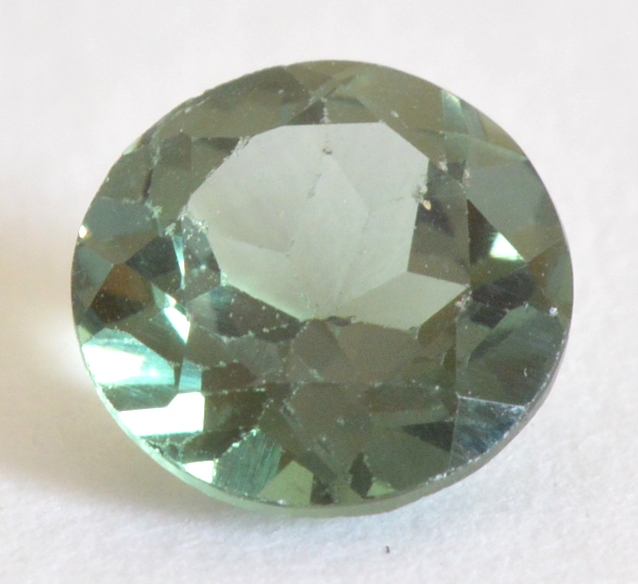 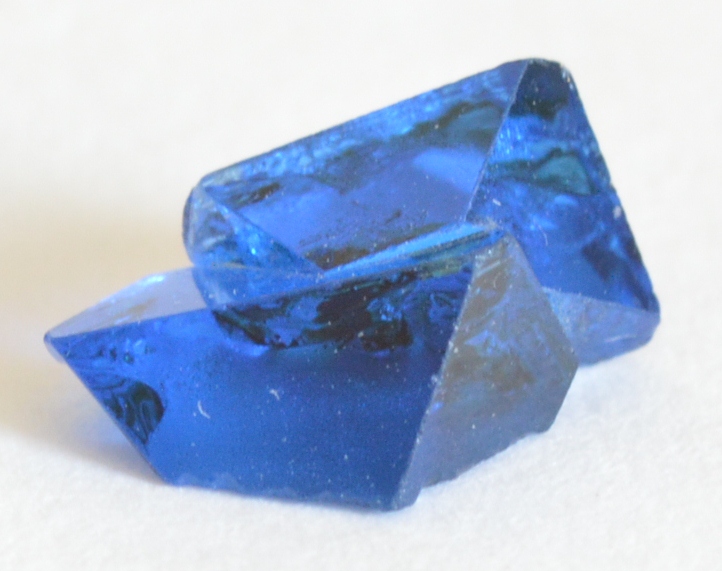 Blue synthetic Spinels of the flame fusion type are typically colored only by cobalt. No iron is added, and therefore they are diamagnetic, another property that distinguishes blue flame fusion Spinels from blue natural Spinels. When viewed under the Chelsea filter and also under longwave UV light, the light blue and medium blue gems pictured below left and center show a pale pink reaction due to low cobalt content, while the dark blue gem on the right appears bright red due to much higher cobalt content. None of the synthetic Spinels shown below contain enough cobalt to cause magnetic attraction.﻿