Rhodolite is a variety of Pyrope that was first described in 1882 in North Carolina, USA. It was named after the local Rhododendron flower, which it resembles in color. Rhodolite Garnet is defined by this purplish color.

As with other Pyrope varieties, the Pick-up response can be relatively weak. The occasional Rhodolite at the extreme low end of the range may only show a Drag response, and such gems are difficult to distinguish from purple Pastel Pyropes.

The graph below shows Rhodolite graph points. Like Malaya Garnet, Rhodolite is often a mixture of Pyrope, Almandine and Spessartine. Most graph points fall well inside the boundaries of the Pyralpsite ternary.

The graph point positions for 68 Rhodolites from around the world demonstrate that this variety of Pyrope Garnet is not only distinguished by its unique purple color (which is influenced by trace chemistry), but also by its major composition, which tends to include more Spessartine (manganese) and less Almandine (iron) than what is found in red Standard Pyrope. The range of composition also indicates that most Rhodolites are closer to the pure Pyrope end member than are Standard Pyropes, meaning Rhodolites in general have higher magnesium content than Standard Pyropes. However, the occasional "high" Rhodolite can have composition that approaches the composition of some low Almandine gems.

Rhodolite color ranges from purplish red to reddish purple to pinkish purple. Color intensity can vary from light (below left) to dark (below right). Purple color is the result of the ratio of chromium/vanadium (pink component) to iron and manganese (blue component), and iron content is on average lower than in Standard Pyrope.

Gems that are reddish purple (as are the two gems above) with a predominant hue of purple in daylight tend to show color shift to pink or red when viewed under incandescent light. Rhodolites that are purplish red (as are the two gems below) have a predominant hue of red or pink in daylight. Gem dealers use "fruity" names to refer to these reddish Rhodolites, such as "Cranberry" Rhodolite, "Raspberry" Rhodlite, and "Cherry" Rhodolite.

The Uvarovite/Knorringite content (chromium), plus possible Grossular content, represent multiple component species within the Chrome Pyrope mix. These end members in addition to Pyrope and Almandine end members place Chrome Pyrope graph points above the Pyralspite ternary toward the Ugrandite ternary so that the graph points lie between the two series, as seen below.

The ruby-red color that is typical of Chrome Pyrope is due to high chromium content derived from Uvarovite and Knorringite. The coloring agents chromium and iron found in Chrome Pyrope are the same ones that give Ruby its blood-red color. Chromium content has been reported to be in the range of 4% - 8% chromium oxide for most gem-grade Chrome Pyrope. This is more chromium than what is found in most Rubies, and considerably more chromium than what is found in any other type of Garnet. Chromium is likely responsible for a small percentage of the total magnetic susceptibility of Chrome Pyropes. Despite the high chromium content, Chrome Pyropes do not fluoresce under UV light due to the the quenching effect of relatively high iron content, and also possibly due to concentration quenching by chromium.

Some key identification parameters for Chrome Pyrope are: 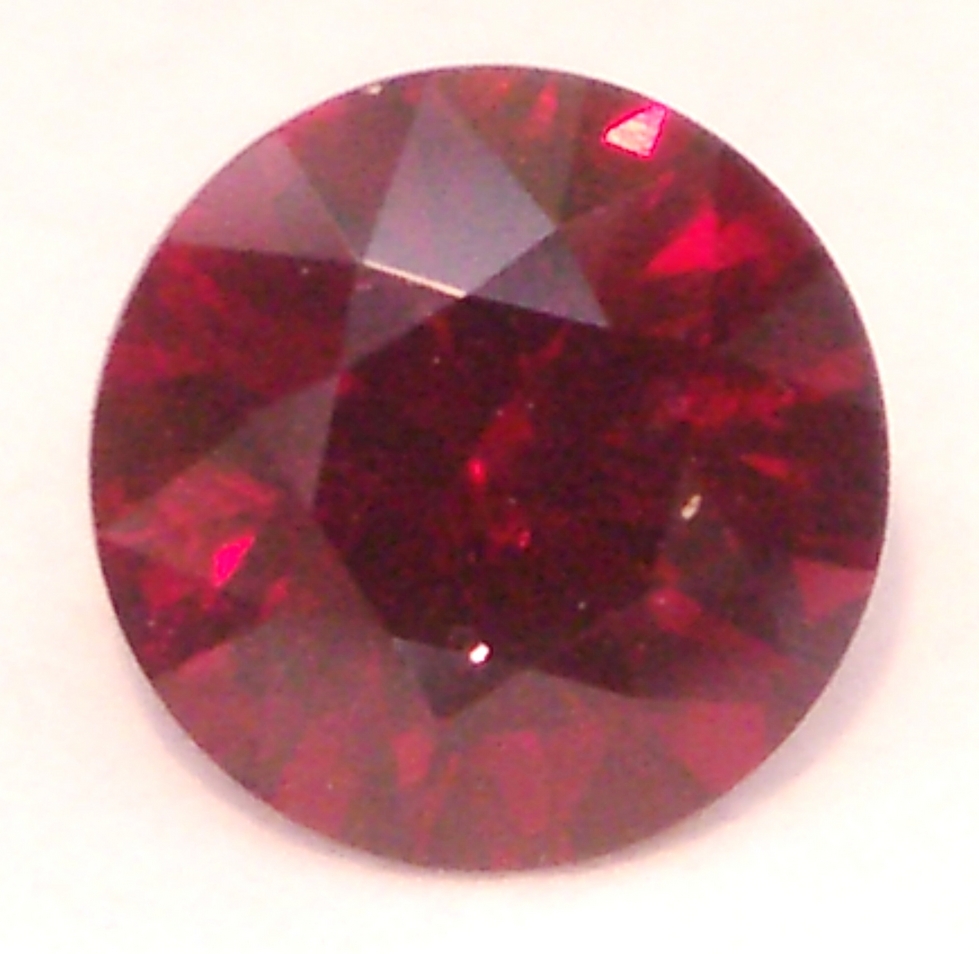 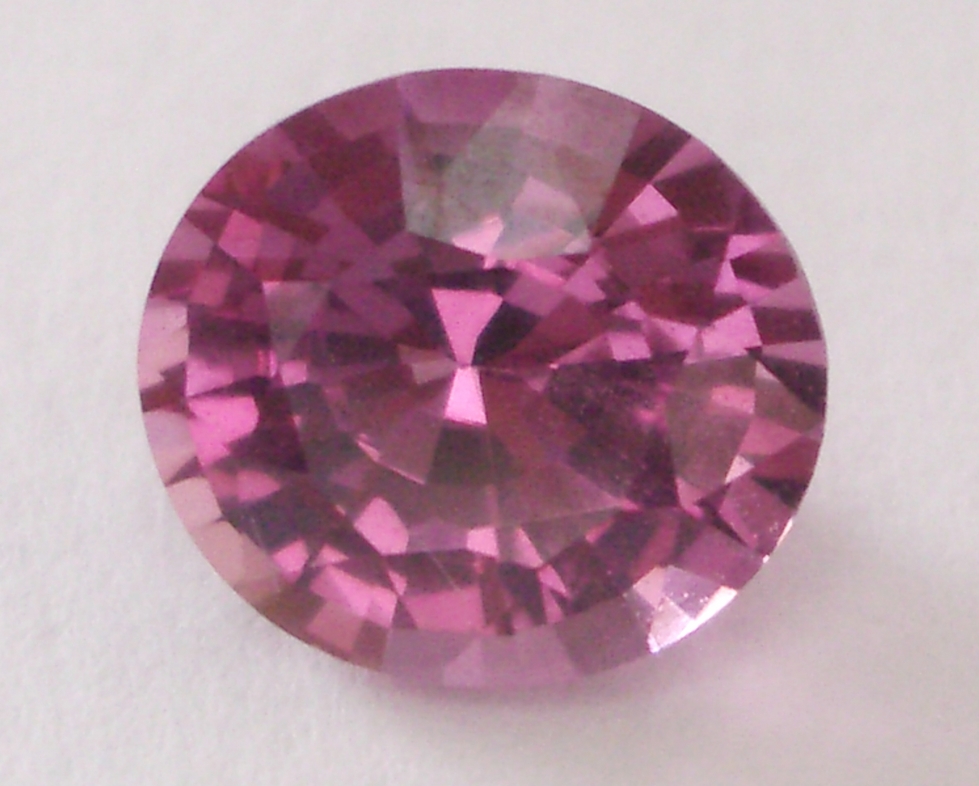 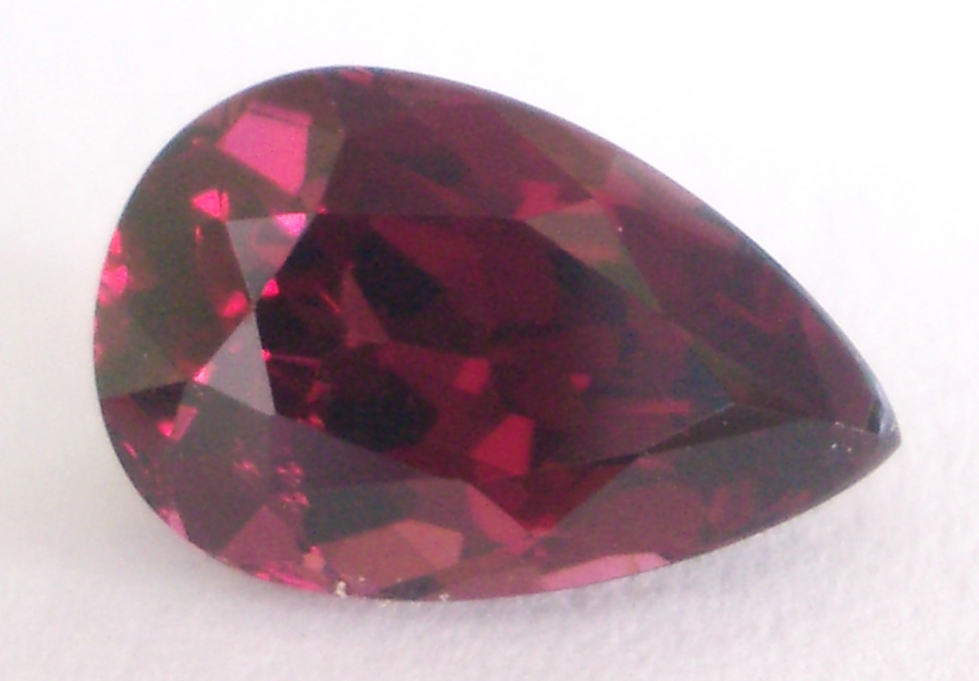 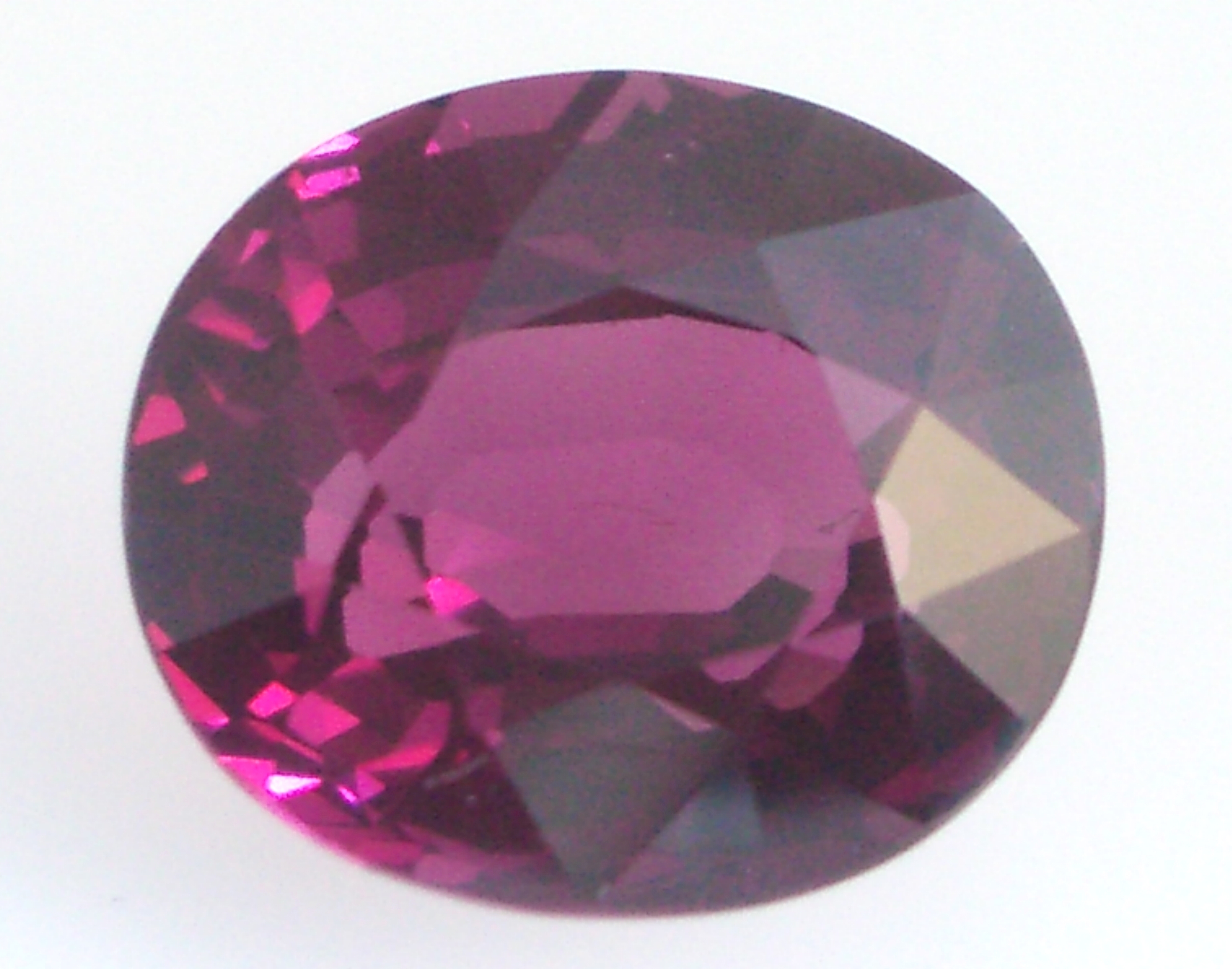 The graph points move upward as higher chromium content raises the gem density and refractive index. The upward positioning of Chrome Pyrope points could also be in part be due to the lower magnetic susceptibility of chromium as it replaces iron, moving the points to the left and away from the Pyrope-Almandine line.

Some Anthill Garnets have a reddish purple or violet hue rather than the pure red hue we expect from a high-chromium Pyrope. The reason for this color variation is likely due to to variations in trace chemistry. Pictured below are two Anthill Chrome Pyropes from a Navajo reservation in Arizona. The gem on the left shows an unusual purplish red color, and the gem on the right shows the typical red color of Chrome Pyrope.

On the graph below, Chrome Pyrope graph points are shown in comparison to Standard Pyrope graph points. The Low gray﻿ graph point to the far left represents the 0.25ct purple Anthill Chrome Pyrope Garnet (above left). This Pyrope has a composition closer to the pure end member than any other Pyrope we tested including  a pink Pastel Pyrope from Dora Maira Massif in Italy. We calculate the composition of this gem to be approximately 88% Pyrope, which means 88% of site A is filled with magnesium. The remainder of site A is filled with calcium (Grossular), ﻿iron (Almandine) and chromium (Uvarovite).

As you can see, the Low Anthill Garnet point has a magnetic susceptibility of 4.54, which is the lowest magnetic measurement this researcher has found for any Pyralspite Garnet, including the lowest Pastel Pyrope from Dora Maria Massif (SI 4.72). Because this purple Chrome Pyrope is very small, it picks up with a hand-held magnet, but Chrome Pyropes of average size show only a ﻿Drag response.

One anomalous Chrome Pyrope with a purplish color had a hazy transparency and a much lower RI than all other Chrome Pyropes tested in our study. With an RI of only 1.725, this small .33ct round was originally identified by the seller as Grossular, but the higher magnetic susceptibility and higher chromium content as indicated on a spectrometer confirmed to us that this is Chrome Pyrope. The plot point for this Garnet is below the Pyrope-Spessartine join rather than above the Pyrope-Almandine join like other Chrome Pyropes. The graph point actually falls within the range for Pastel Pyrope rather than for Chrome Pyrope or Grossular.

We speculate that high hydrous content from mixing with Hydrogrossular Garnet in solid solution may cause the abnormally low RI for this Chrome Pyrope. Like other Chrome Pyropes, this gem does not fluoresce.