Garnets are some of the most magnetic gemstones, and magnetic testing gives us rare insights into the world of Garnets, revealing how the different species and varieties of Garnet are related. For most people, the term Garnet brings to mind a dark red gem, but Garnets are in fact a diverse group of gemstones, with more species and color varieties than any other type of transparent gemstone.

There are 15 species of natural Garnet recognized by mineralogists, but most are of little interest to gemologists. Only 6 Garnet species produce gem-quality crystals that are fashioned into gemstones. These are Almandine, Pyrope, Spessartine, Grossular, Andradite and Uvarovite. Almandine, a red to purplish red gem, is the most common species. Gem-quality Uvarovite is mainly found as in druse form (clusters of tiny green crystals), and Uvarovite jewelry is fashioned from druse slabs.

In addition to red, Garnets are found in every color, from colorless to black, pink, purple, blue, green, orange, yellow, and even iridescent. Some Garnets change color from daylight to incandescent light, much like Alexandrite. There are also hundreds of more subtle color variations among gem-grade Garnets. Some varieties have only been discovered in the last few decades, and some are among the world's rarest gemstones. This section offers a tour of all of them, and presents a considerable amount of new information about Garnets never before published, achieved through extensive study by this author.

The World of Garnets

What are Garnets? The Garnet group falls within the family of Orthosilicate minerals, all with related chemical compositions. Other Orthosilicates include Peridot, Zircon, Topaz, Andalusite, and many secondary or less common gems such as Kyanite and Sphene. What all these gemstones share in common is the chemical component SiO4 (one silicon atom per 4 oxygen atoms) in their chemical formulas.

Garnets belong to the cubic crystal system, and therefore gems are isotropic (singly refractive). However, under a polariscope, anomalous double refraction is common in red and green Garnets due to distortion of the isotropic cubic crystal structure that may have occurred during metamorphic conditions of high pressure and high temperature. Garnets are found all over the world. Some of the most unusual gem varieties come from African countries such as Namibia, Tanzania and Madagascar. Garnets are one of the few primary or common gemstones that are generally not treated, although Demantoid, and occasionally Hessonite (Bear Wiliams, pers. comm., 2011), are known to be heated to enhance color. The synthetic Garnet GGG (gadolinium gallium garnet) is no longer manufactured for gem purposes, and the synthetic Garnet YAG (yttrium aluminum garnet) is found only in limited quantities.

The extreme diversity seen in Garnets is the result of different species mixing together in endless variation, similar to what we see among different species of Tourmaline. We'll see how magnetic testing can reveal exactly how different Garnet species have blended within an individual gem. Based on analysis of over 500 Garnets, we present a new proposed Gem Garnet Classification system, as well as the first Graph of All Gem Garnets showing composition ranges for all known gem Garnets. 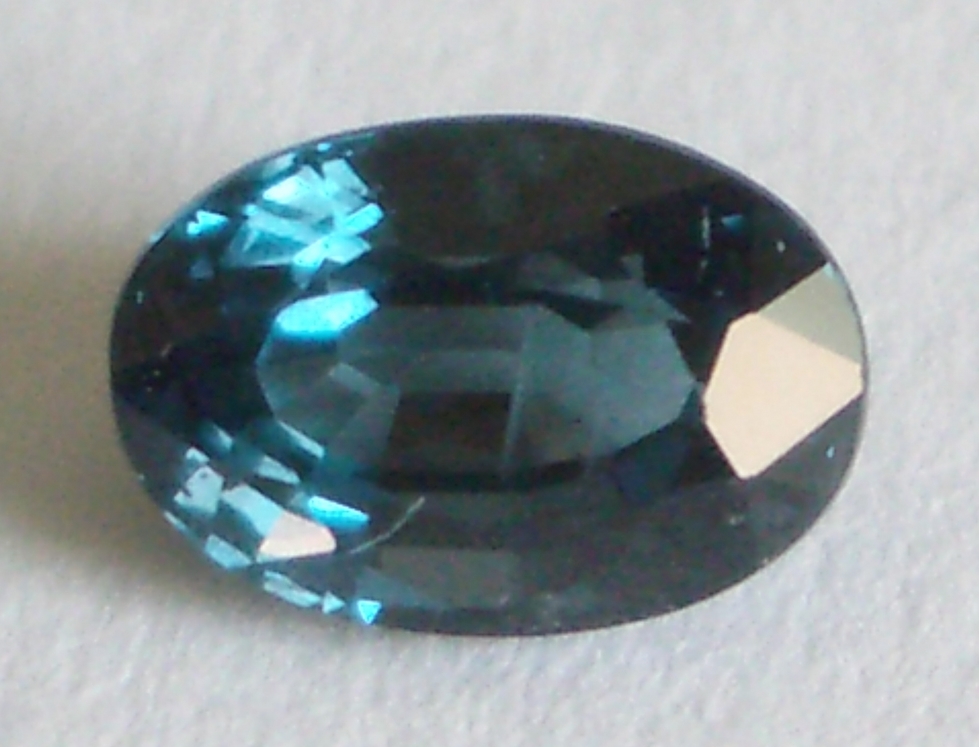 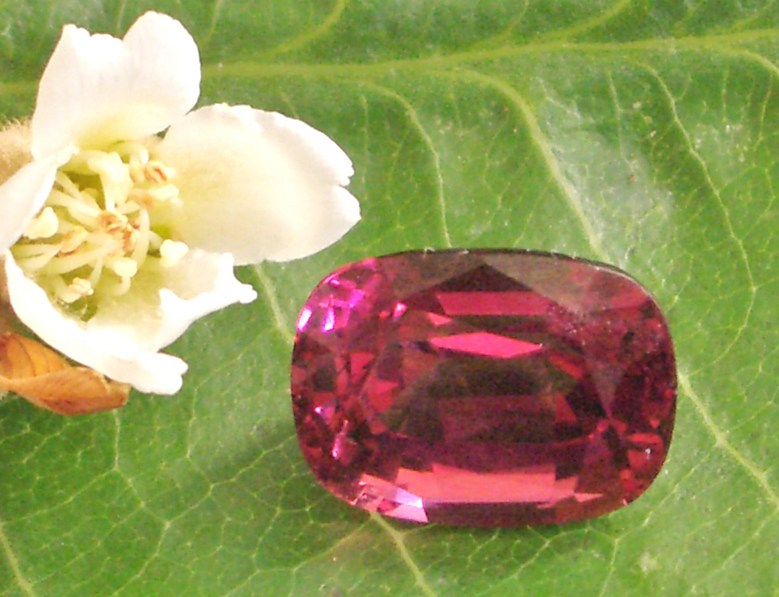 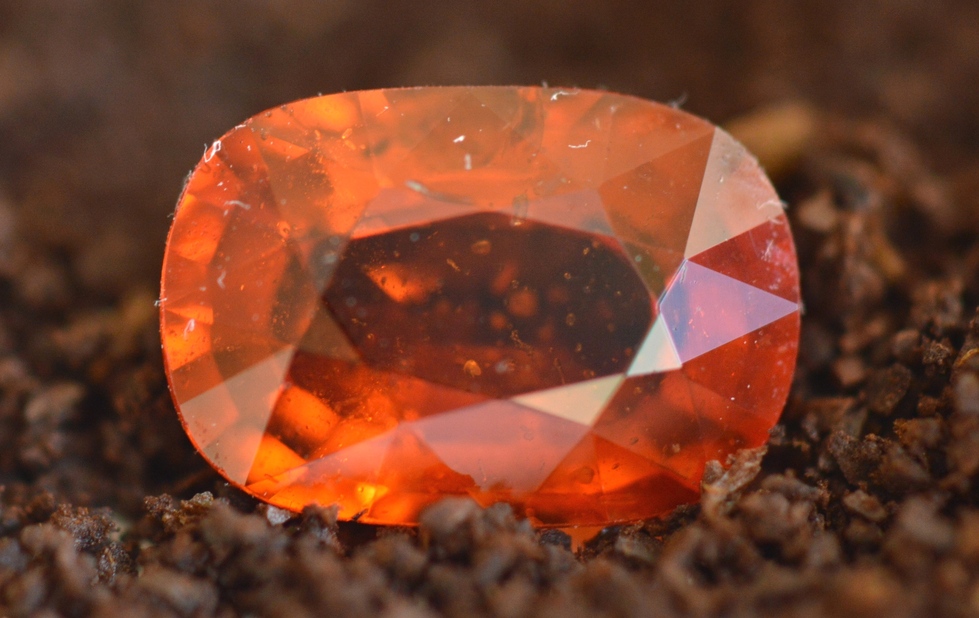 Garnets are Found in Many Colors

Why So Many Varieties?

Gemologists separate Garnets species into different varieties based on variations in color and color phenomena. To learn why there is such tremendous color variation in Garnets, it’s helpful to have a basic understanding of the chemical formula shown below. The letters A and B simply represent sites where ions of specific chemical elements can bond with silicon and oxygen to give a Garnet a chemical composition unique to its particular species.

The A and B sites can be partially filled by calcium, magnesium or aluminum ions, none of which cause color. But coloring agents can also occupy these sites. The four principal metals that can cause color in Garnets by occupying sites A or B are iron (purplish red, brown, yellow), manganese (orange, pink), chromium (red, green), and vanadium (green). Combinations of these chromophores in varying concentrations result in a bewildering variety of color and subtle variations in hue. Charge transfer processes likely also play a role in creating and modifying color in some Garnets, although this is not well understood by researchers. When chromium is present, Garnets with low iron content (Grossular Garnets and Pyrope-Spessartine Garnets) also fluoresce pink or red under long ﻿wave UV light.

The Chemical formulas for the six species of gem Garnet are shown below. These formulas represent the composition of the pure un-mixed Garnet species, referred to as End Members. The chromophores (color-producing metal ions) are highlighted in color, with the valence number added here in superscript for clarification. Chromophores  are found at the A site in Pyralspite ﻿Garnet species, and at the B site in Ugrandite Garnet species.

﻿The 100% pure end-member Garnets shown above don't exist in nature. As you can see by its chemical formula, pure Pyrope Garnet would be colorless, as there are no transition metal chromophores in the A or B sites, only magnesium and  aluminum. The graph point for pure Pyrope would plot at zero magnetic susceptibility, indicating it would be diamagnetic. Pure colorless gem Pyrope is not known, but rare near-colorless gems do exist. The most common Pyrope gems are red and significantly magnetic due to mixing with other Garnet species such as Uvarovite/Knorringite (chromium) and Almandine (iron).

Pure Grossular Garnet would also be colorless and diamagnetic because there are no chromophores in the A and B sites, only calcium and aluminum. In this case, Grossular gems do approach the pure end-member in composition, and examples of pure colorless gems do exist. These are called Leuco Garnets, though in most cases these Garnets retain a hint of color and a measurable amount of magnetism. We have not yet encountered a diamagnetic Leuco Garnet.

Pg 1) The World of Garnets

Pg 3) How Magnetic Are Garnets?
Pg 4) A Rainbow of Color in GarnetsPg 5) Graph of All Gem Garnets