Ugrandites are sometimes referred to as the calcium Garnets. All 3 gem species (Uvarovite, Grossular and Andradite) have calcium in the A site of their chemical formulas. Like Pyralspites, they exhibit a wide diversity of color, particularly among Grossular Garnets. Small amounts of chromium from Uvarovite & Knorringite, and vanadium from Goldmanite, are responsible for the green colors we see throughout the Ugrandite Garnets. Within Ugrandite gems, iron is a weak chromophore. Iron (Fe3+) can create strong magnetism while remaining cryptic (not visible as color).

Demantoid: Green Andradites are a color variety called Demantoid Garnets. They were first discovered in the Ural Mountains of Russia in the mid-1800’s, and today they are also commercially mined in Madagascar and Namibia. Dispersion of light in these gems is even greater than in Diamond, and transparent green Demantoids are the most valuable Garnets in the world, particularly those with dark green color derived primarily from chromium (Chrome Demantoids). The best Chrome Demantoids can sell for $10,000 per carat. Demantoid colors range from brownish green to yellowish green to mint green to dark green. In the graph above, the lowest graph point represents a dark green Chrome Demantoid.

Demantoids are the only natural transparent green gemstones of any kind that pick up with a magnetic wand when of average size (with the exception of rare green Color Change Garnet). The high magnetic susceptibility is due to iron (Fe3+).

Brown, Red and Yellow Andradite: Many Andradites have brown to reddish brown, and on rare occasion, red body color in daylight. Others are yellow, with the trade name Topazolite. Color is likely due entirely to inter-valence charge transfer (iron-titanium and possibly iron-iron, Fe2+-Fe3+). Some brown and yellow Andradites exhibit color change toward red when viewed under incandescent light. Yellow Andradites (Topazolites) also show color change from yellow in warm incandescent light to green (from chromium) in cool LED light. All the warm daylight colors of Andradite are grouped here as Brown Andradite, and all fall along the Grossular-Andradite join on the Andradite graph shown above.

Melanite: Black Andradite is called Melanite or Titanium Andradite, and it is generally opaque with a high luster. This color variety is not common as a gemstone, although historically it was used in mourning jewelry as was black Schorl Tourmaline. Melanite forms a solid solution series with Schorlomite, which is a non-gem Garnet that has titanium in the B site of its chemical formula. Titanium, iron and manganese contribute to the black color through inter-valence charge transfer (Fe2+-Ti4+, Mn2+-Ti4+, and Fe2+-Fe3+). No Melanite graph points are shown on the graph above. It is probable that points fall along the joining line connecting Andradite and Schorlomite. The Schorlomite end member is for the most part too high to be visible on the graph. There is a wide variance in magnetic susceptibility of black Garnet crystals tested in our study, varying from paramagnetic Melanite crystals to ferromagnetic crystals with extremely high iron content.

Iridescent Andradite: One of the rarest Garnets is Iridescent Andradite, also called Rainbow Andradite. It has been mined in Sonora (Mexico), New Mexico (USA), and Nara (Japan). This is an opaque brown Garnet that reflects rainbow colors at the surface when light hits at just the right angle. The rainbow color is due to interference colors and to light diffraction within stratified growth layers (Hainschwang and Notari, 2006). This variety of Andradite has the highest magnetic susceptibility and is closer to pure Andradite than any other variety we tested, with a composition of 96% Andradite and 4% Grossular.

Andradite has the highest refractive index of all gem Garnets, and due to its high iron content, it is by far the most magnetic of the 3 Ugrandite species. The refractive indices of Andradite are over the limit of a standard refractometer. So how do we plot composition on a RIMS graph without RI readings? The Andradite graph point positions shown below were approximated based on the measured magnetic susceptibility in inferred close proximity to the Grossular-Andradite join. This is based on reports by other researchers that Andradite is in solid solution series with Grossular Garnet rather than with Uvarovite.

Andradite Garnets are found in a range of colors: brown (common Andradite), yellow (Topazolite), green (Demantoid), red, color change, iridescent (a.k.a Rainbow Garnet), black (Melanite), gray, and in rare instances near-colorless. Colors other than green may involve iron to titanium (Fe2+-Ti4+) and iron to iron (Fe2+-Fe3+) inter-valence charge transfer. Green color is due to either iron or chromium or a combination of both: iron (Fe3+, yellowish green) and chromium (pure green and bluish green). Whether or not Andradite is an idiochromatic (self-colored) species is debatable. Unlike Andradite, idiochromatic gems are typically found in only a single color, and near-colorless examples are generally not seen in idiochromatic gems, yet near-colorless Andradite has been documented (see below).

Most Uvarovite Garnet is found in druse form (tiny crystals strewn across the surface of host matrix rock). Uvarovite crystals are generally too small to be faceted as gems, but bright green druse specimens on matrix are often fashioned into jewelry. Uvarovite was discovered in the Ural Mountains of Russia, as was green Demantoid. The majority of druse gems offered on the gem market are from Russia, although Uvarovite is found in other locations such as Quebec, Finland, Afghanistan, South Africa and California.

The Uvarovite species is also referred to as Chromium Garnet. Chromium (up to 27% chromium oxide by weight) rather than iron is the idiochromatic coloring agent, imparting a deep green color and strong magnetism to all examples of this species. Vanadium (from Goldmanite) may also contribute to the green color, and published research has shown that in some cases vanadium may be the primary coloring agent. Crystals are mostly opaque, with some transparency near the surface of the crystals.

Chromium ions are rarely magnetically detectable in any gemstone, but because chromium is in such high concentration in this species, we encounter high magnetic susceptibility from chromium and vanadium that can be measured. Most crystals appear bright red under a Chelsea filter, an indication of the elevated chromium content, but concentration quenching by the high levels of chromium prevents any fluorescence under UV light.

Druse specimens of Uvarovite attached to matrix are generally too heavy to show a direct response to a magnet. Although not transparent, the small size of druse crystals permits them to transmit more light than larger Uvarovite crystals that are opaque, and druse specimens appear to have brighter green color than larger crystals. Druse crystals are too small to be measured for magnetic susceptibility with a Hoover balance.

As with all Garnet species, pure end member Uvarovite has not been found in nature. Our Uvarovite crystals have a lower measured magnetic susceptibility (SI 9.09 and SI 9.98) than the hypothetical pure end member (SI 12.75 on the Hoover Diagram). Uvarovite is known to mineralogists to be in solid solution with Grossular and to some extent with Pyrope. In most cases, very little Andradite (i.e. Fe3+ iron) is present.

Therefore we use a Uvarovite-Grossular-Pyrope ternary to plot our graph point rather than the standard Uvarovite-Grossular-Andradite ternary. We extrapolate the over-the-limit refractive index based on proximity to the join connecting Grossular to Uvarovite at the measured level of magnetic susceptibility. If the Finland crystal is colored by vanadium from Goldmanite, then a ternary encompassing Goldmanite would be more appropriate.

On the graph below, you’ll find the dark green graph points of our samples situated below the pure end member along the Uvarovite (Uv.) and Grossular (Gr.) join. Uvarovite can be referred to as Gruvite Garnet, a blend of Grossular and Uvarovite. The dotted line is used indicate the solid solution between Uvarovite and Pyrope. These Uvarovite specimens are the only Gruvite Garnets found in our study of Garnets.

Chemical analyses of Uvarovite samples presented in Deer, Howie and Zussman's 1982 book Orthosilicates indicate that Uvarovite compositions can fall anywhere along the Grossular-Uvarovite join between 50% and 91% Uvarovite. Some Uvarovite specimens were shown by DH&Z to have high Pyrope content, while others had higher Andradite content.

Near-Colorless Andradite: The near-colorless Andradite pictured below left was documented by the RRUFF Project and is considered to be a very pale Demantoid. All the apparent color is likely derived from iron (Fe3+) rather than from chromium. Although we were not able to test this gem, it would qualify as the only near-colorless Ugrandite gemstone that would have high enough magnetic susceptibility to be picked up by an N52 magnet.

It might seem unlikely that a gemstone with such high iron content as Andradite could be near-colorless, but this is another example of how iron in the valence state of Fe3+ is by itself a weak chromophore. The iron in the near-colorless gem (left) is visible only as a very pale yellowish green. We have not encountered any Demantoid Garnets with so little color. The Demantoid with the lightest color that we have tested is shown below right. This tiny light green gem was mined in Quebec, Canada, and derives its pale color primarily from iron (Fe3+). It has the lowest Andradite content of all Andradites we tested, with a composition of 69% Andradite and 31% Grossular. 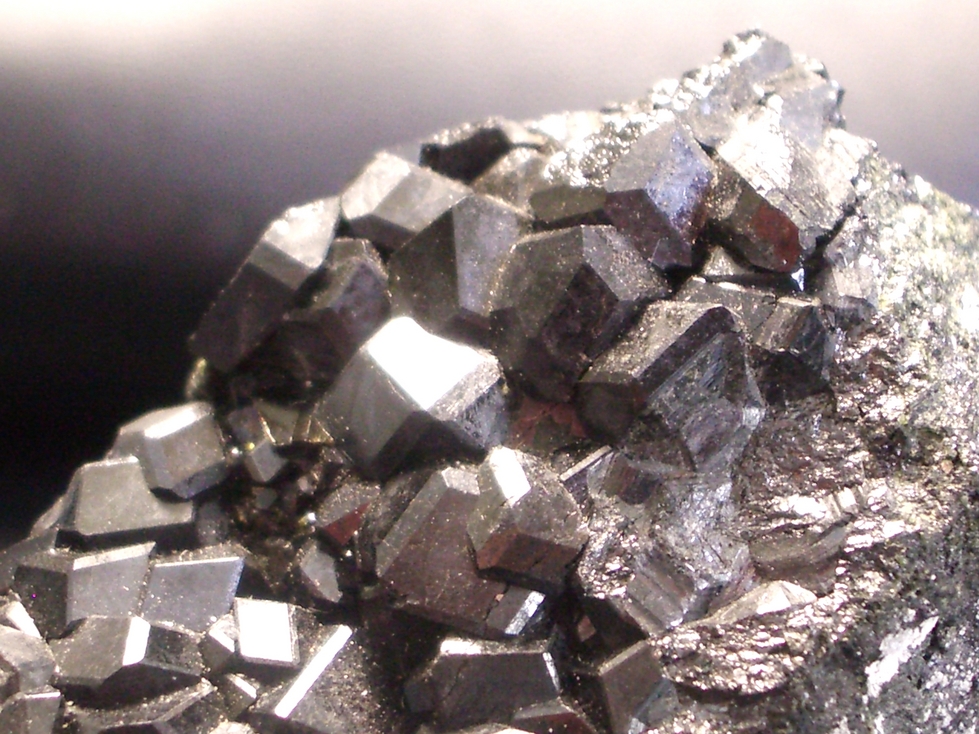 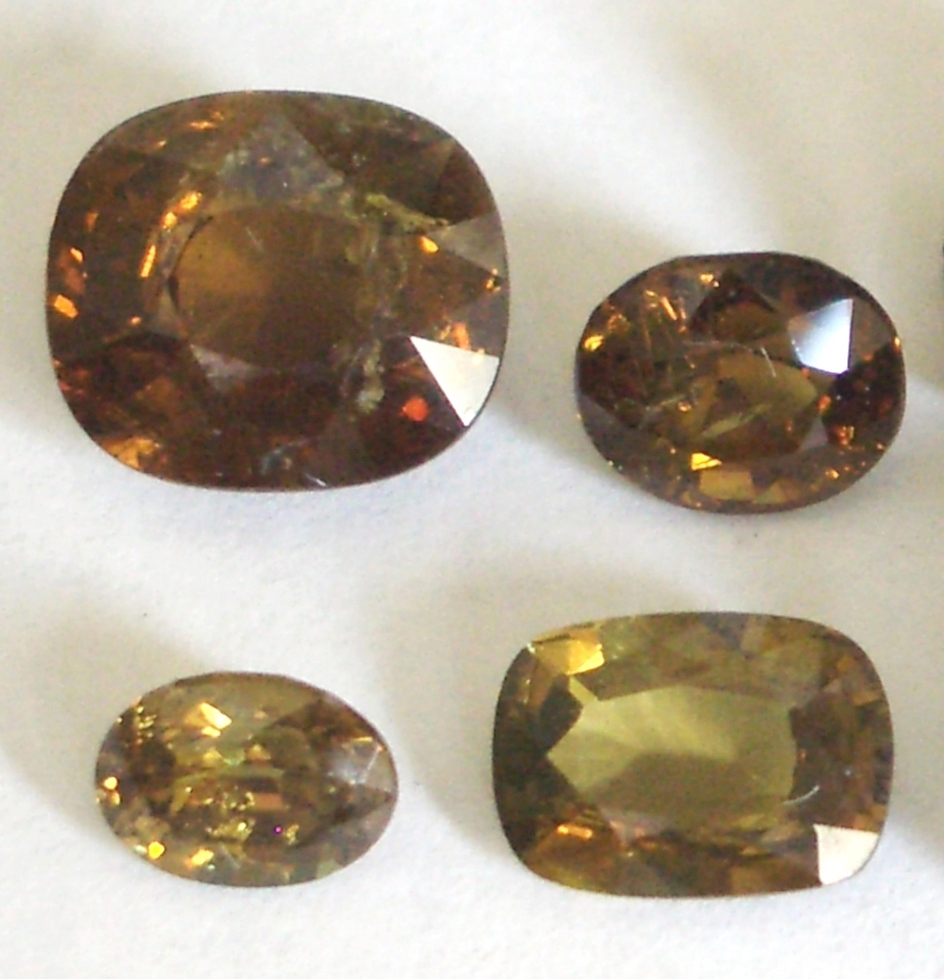 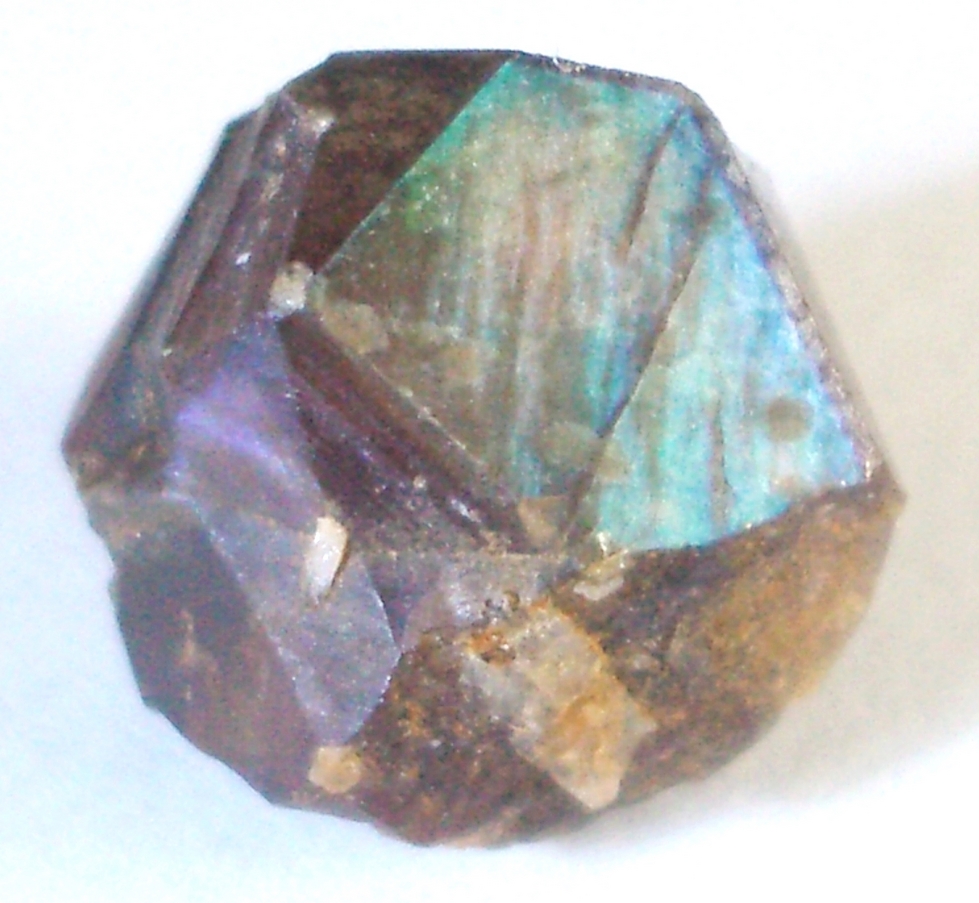 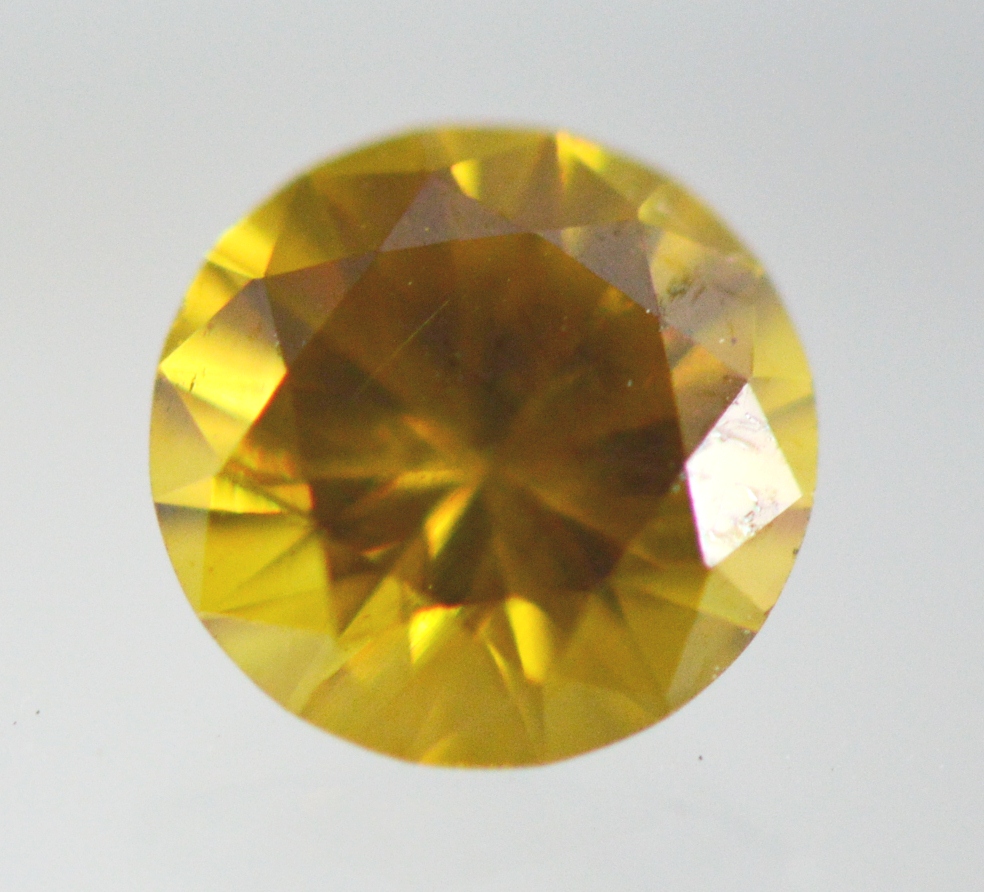 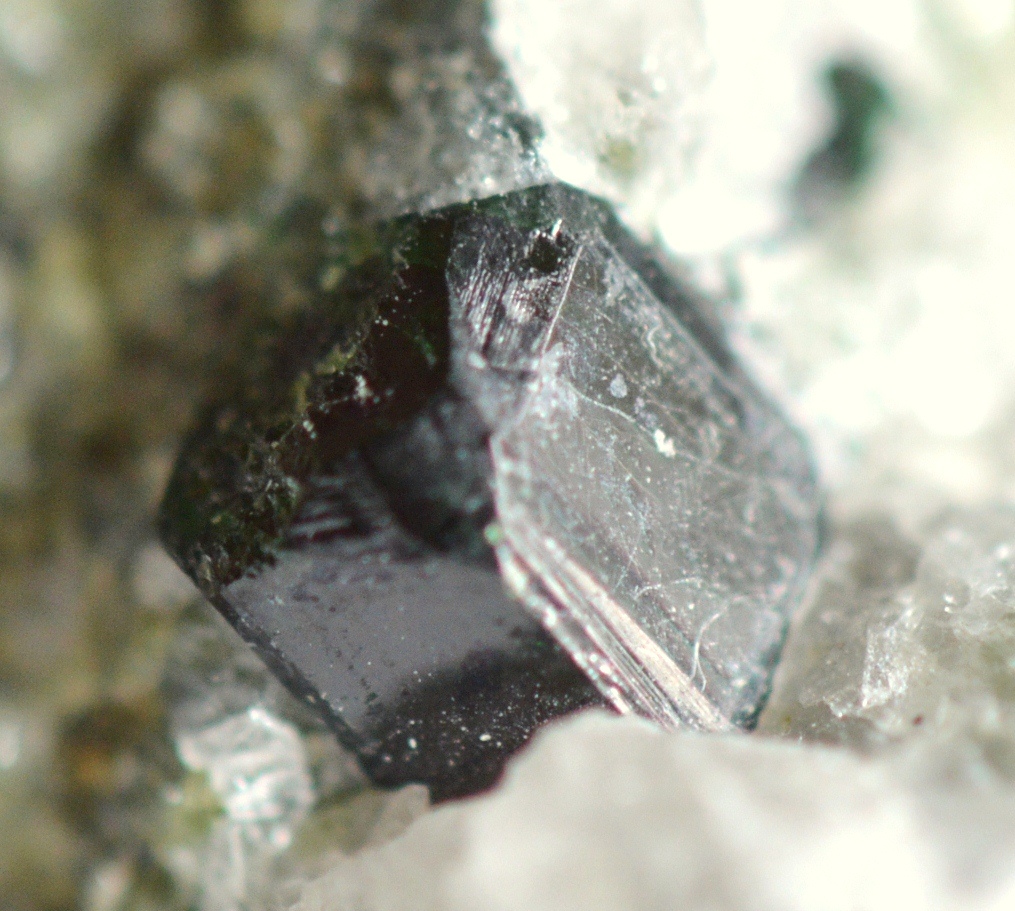 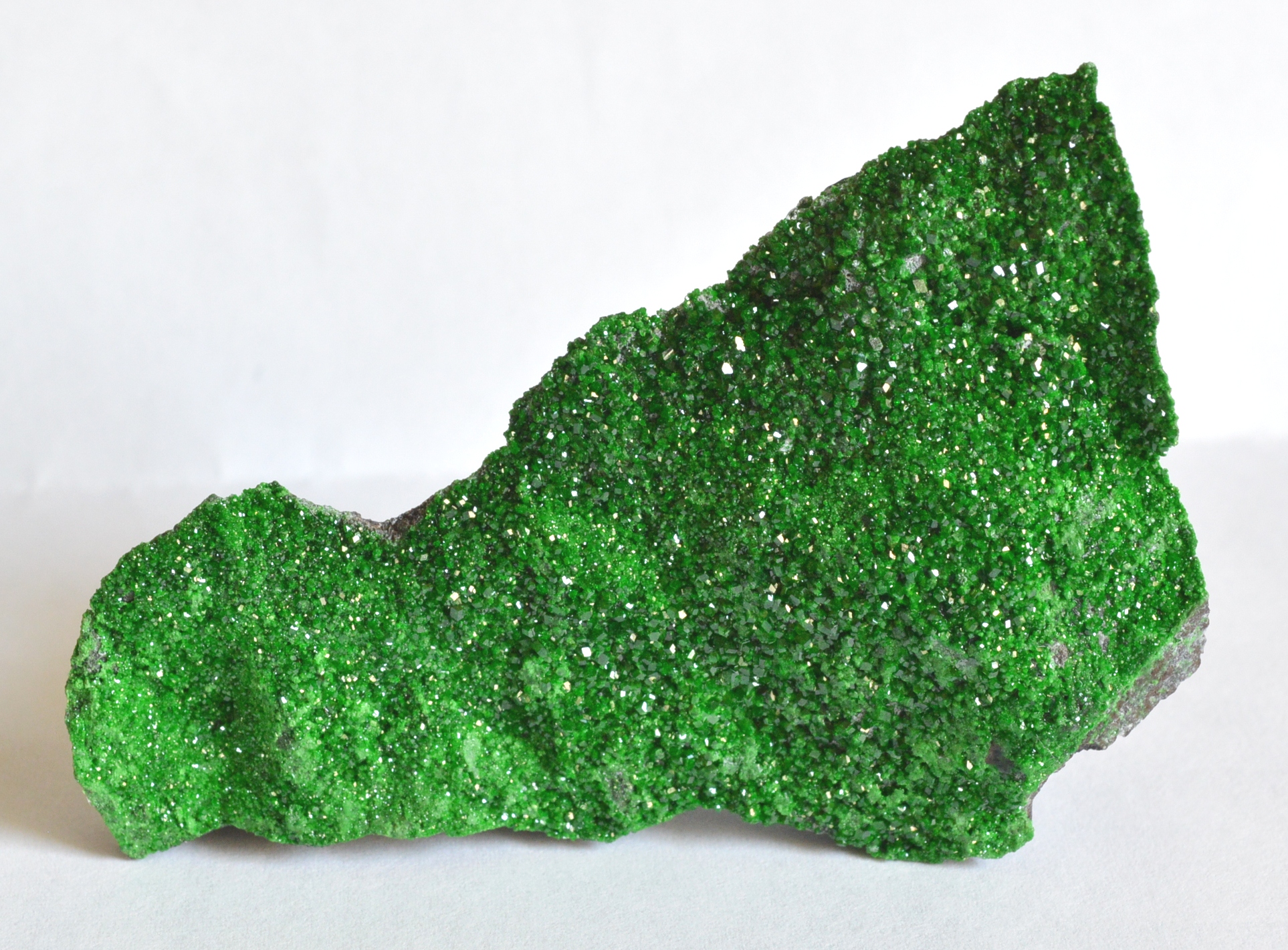 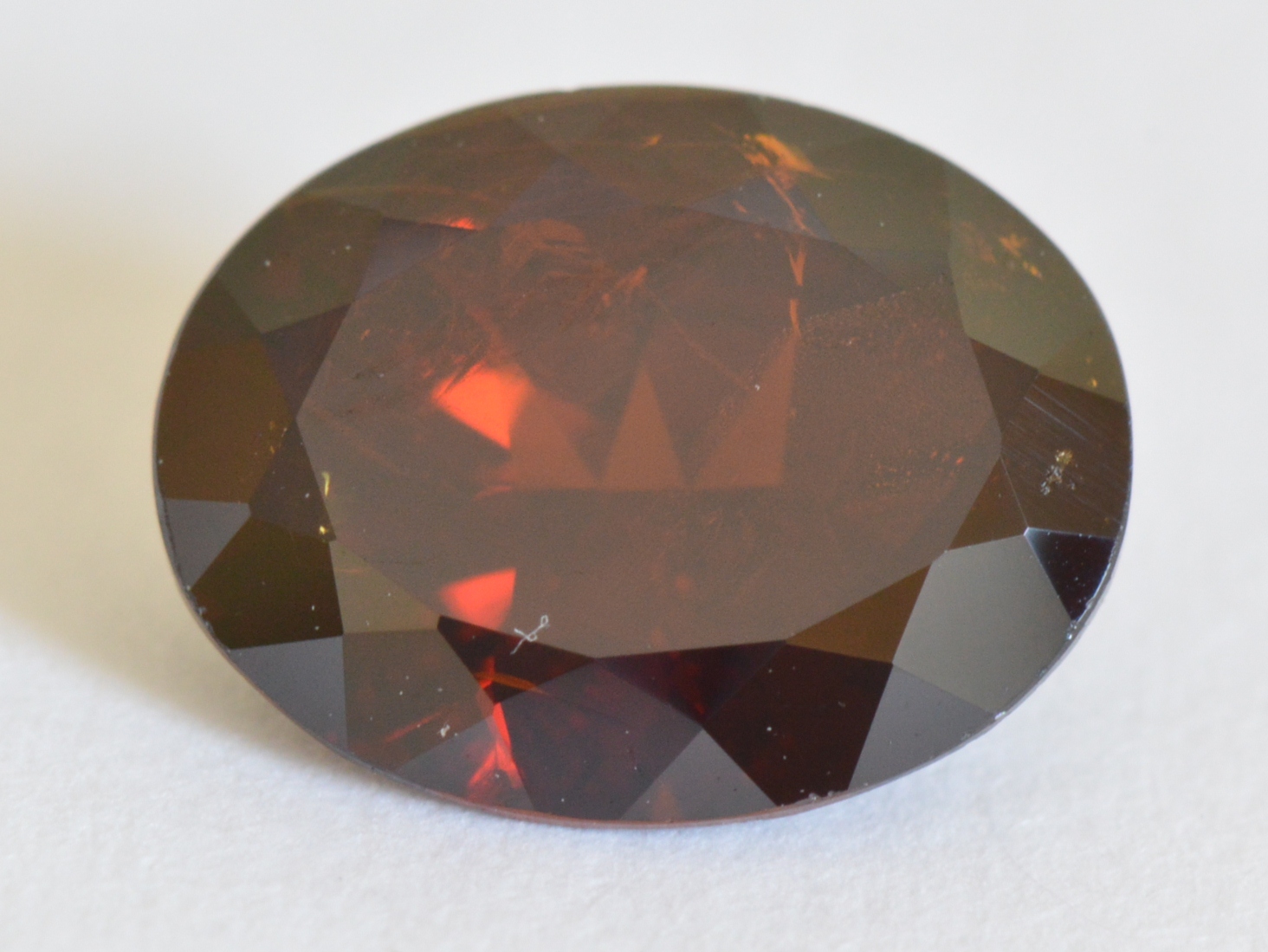 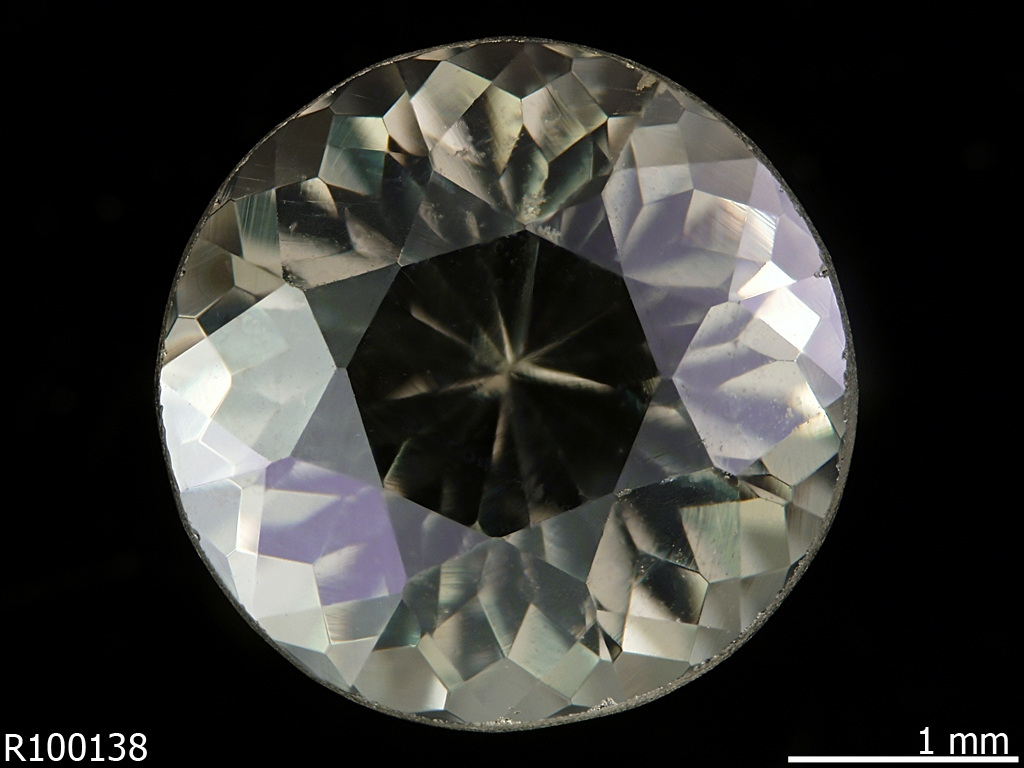 Large individual Uvarovite crystals are quite rare. These larger crystals (over 1mm) are very dark green in color, mostly opaque and very rarely faceted. Such crystals show a Drag response due to high chromium/vanadium content, and single crystals under 1ct in weight can show a Pick-up response. Some very rare crystals over 10 mm in size have been found in Finland, and relatively large crystals are occasionally mined in Russia and more recently in Afghanistan. The crystal from Finland shown below (left) does not glow red under the Chelsea filter, suggesting it may be colored by vanadium (from the Goldmanite end member species) in addition to chromium from Uvarovite.

(Crystals up to 1mm, Russia)

All gem Ugrandites except Uvarovite and possibly Melanite can be referred to as Grandites, with major mixing in varying proportions between only 2 end member species,﻿ Grossular and Andradite.

Demantoids are also the only Garnets that are commonly treated, with low heat being applied to drive out the yellow and brown color. Heat alters the valence state of iron from Fe2+ to Fe3+, and may eliminate intervalence charge transfer processes that produce yellow and brown color in Andradite. The trivalent iron (Fe3+) remaining in green Demantoid after heat treatment is responsible for yellowish green color typical of Demantoid. Dark green color in Chrome Demantoids is due to a small amount of chromium and possibly vanadium that is present in addition to the iron, and these Garnets show a red reaction under a Chelsea filter.