The two dark red Spinels shown below have similar color, but one is much more magnetic than the other. The gem on the left is weakly magnetic, while the gem on the right is the only red Spinel we tested that showed a strong magnetic response to a handheld magnet (SI 139).

Chromium is responsible for color in red, pink, and orange Spinels. The concentration of chromium in some vivid red Spinels can be high enough to contribute to the total measurable magnetism. All red Spinels in this study showed detectable magnetism. Most were only weakly magnetic.

Pictured below is a remarkable example of two pink Spinels of similar color intensity that have strikingly different magnetic susceptibilities. The vivid pink gem on the left has weak magnetic susceptibility that is detectable with a magnetic wand, but so low that it cannot be measured with a Hoover balance. The vivid pink gem on the right is strongly magnetic, with a measured susceptibility that is higher than any pink Spinel in this study, and also higher than any red Spinel. The strong magnetism suggests the presence of cryptic iron (Fe3+), and this iron content is confirmed with a spectrometer. The gem on the left below shows UV fluorescence from chromium, while all fluorescence is quenched by iron in the gem on the right.

Orange Spinel: Orange as the primary body color is an unusual color for Spinel. This color is also due primarily to traces of chromium. Why orange rather than pink is not known, but we can speculate it might be related to a charge transfer process and/or to additional traces of manganese, or perhaps traces of iron (Fe3+). Orange is usually a component color along with pink/red rather than a pure color in Spinel. All  orange, pinkish orange and reddish orange Spinels we tested were either diamagnetic or very weakly magnetic, indicating very low levels of iron. None of our orange Spinels showed fluorescence, perhaps due to the low levels of chromium. All three orange Spinels shown below are diamagnetic.

Purple color and violet color in Spinel is primarily due to a mixing of blue color (derived from iron and cobalt) with pink & red color (derived from chromium). On average, the magnetic susceptibility of purple Spinel is intermediate between that of blue Spinel and pink/red Spinel. All purple Spinels tested were weakly magnetic (SI 22-56). Due to iron content, all showed magnetic attraction, and none showed fluorescence.

Color change is an unusual phenomenon in Spinel. The bluish gray Spinel pictured below shows pinkish purple color when incandescent light is applied. Color change can bee attributed to chromium content within this gray gem. This gem also fluoresces red under long wave UV light. The low iron content in this weakly magnetic spinel permits fluorescence, which is likely due entirely to chromium.

Violet is another unusual color for Spinel. The weakly magnetic gem below is colored by low levels of iron, cobalt and chromium. Purple gems contain higher concentrations of chromium than violet gems.

Completely colorless Spinel is rare. Two near-colorless Spinels were tested for this study. The Spinel with a slight tinge of pink due to chromium (below left) was diamagnetic, while the gem with a slight gray tinge due to ferrous iron (below right) was very weakly magnetic. Under long wave UV light, only the pinkish gem on the left contains enough chromium to show fluorescence.

Gray color is caused by ferrous iron (Fe2+). It is necessarily a component color rather than a stand-alone color in Spinel. Gray color seems to be the result of dark blue color combining with light blue color (light transmission windows in the visible spectrum are at 430nm and 490nm). Pinkish gray Spinel is also common. Our study found that Spinels which have gray as the dominant color component are weakly magnetic.

Fluorescence: Chromium causes some pink Spinels to show very strong fluoresce under long wave ultraviolet light. This occurs only in diamagnetic or weakly magnetic gems with low iron content. In dark red natural Spinels, UV fluorescence is weak or absent because most gems have higher iron content. As with Ruby, high chromium content along with low iron content are the conditions needed for maximum UV fluorescence, which appears as a red glow. Lower concentrations of chromium produce weaker fluorescence, and higher concentrations of iron inhibit fluorescence. The Spinels that showed the greatest fluorescence in our study were reddish pink or orangey pink gems from Burma and Tanzania. This includes the beautiful pinkish red Mahenge Spinel from Tanzania (below right). Vivid orangey-pinkish-red "Jedi" Spinels from Burma are also known to be highly fluorescent, but no samples were available for this study.

Green is rarely seen as the dominant body color in gem Spinel. Green Spinels that we have examined have significant blue or gray as the secondary color, and these gems can be described as light blue-green and light gray-green Spinels. The primary coloring agent is iron, and iron to iron  (Fe2+-Fe3+) intervalence charge transfer is presumably responsible for the green color, as has been found in Gahnite Spinel. The two rare Spinels pictured below show light green color as the dominant hue (light blue-green on the left and light gray-green on the right). Both gems are weakly magnetic.

A variety of natural pure green Spinel called Chlorospinel is colored by ferric iron (Fe3+) in addition to copper (Cu2+). Chlorospinels are very rarely found as faceted gems, and none were available for this study. 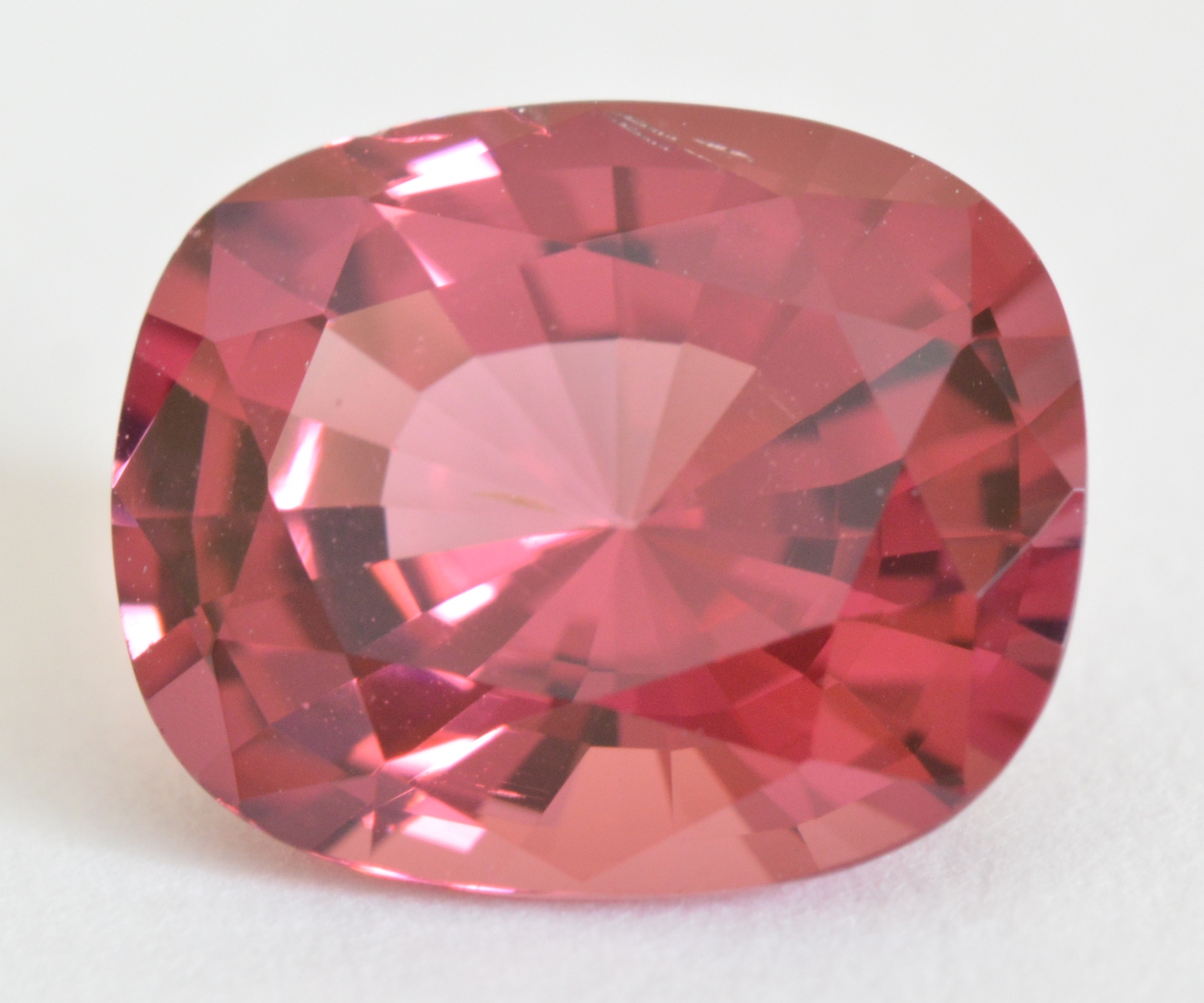 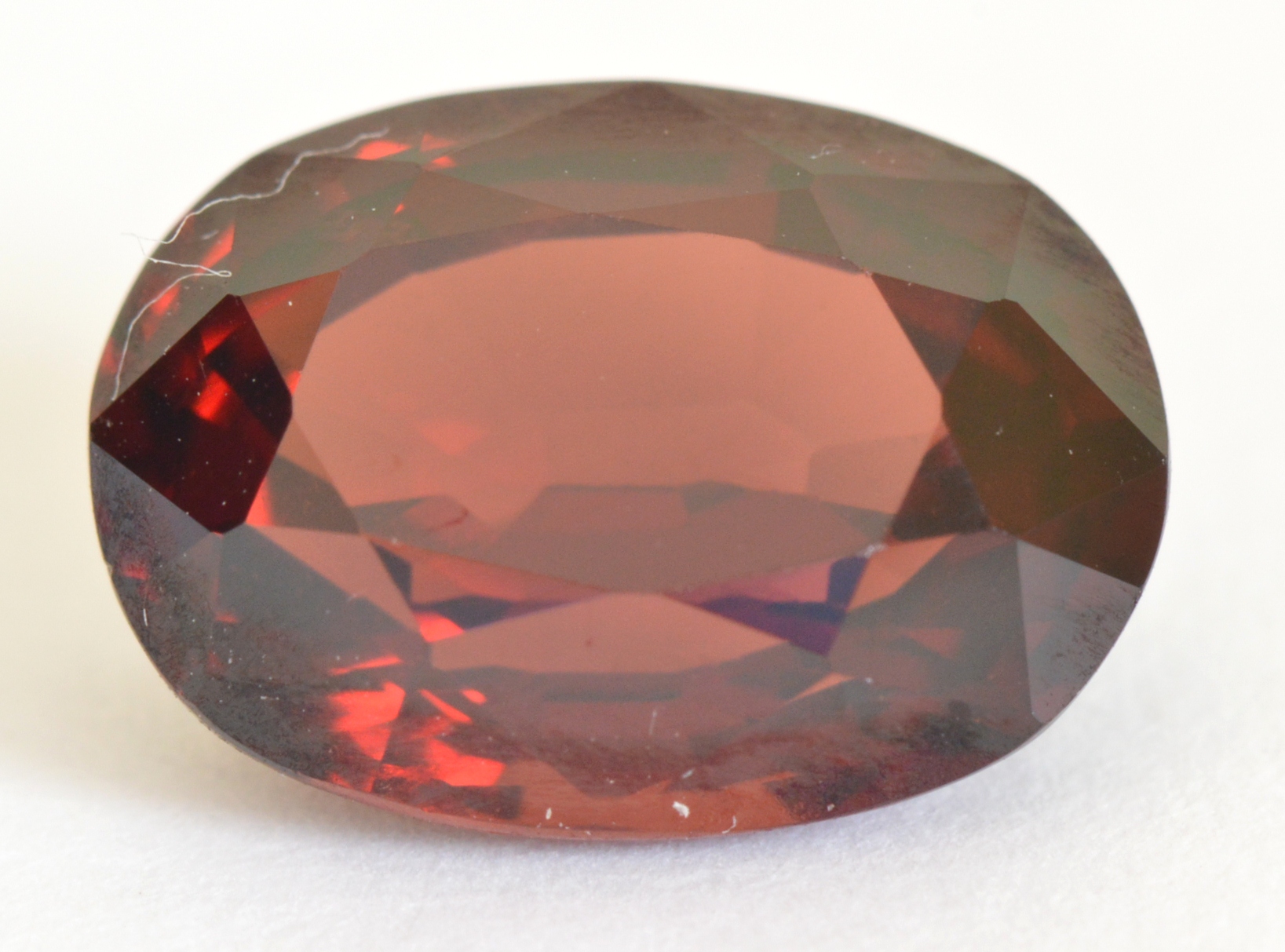 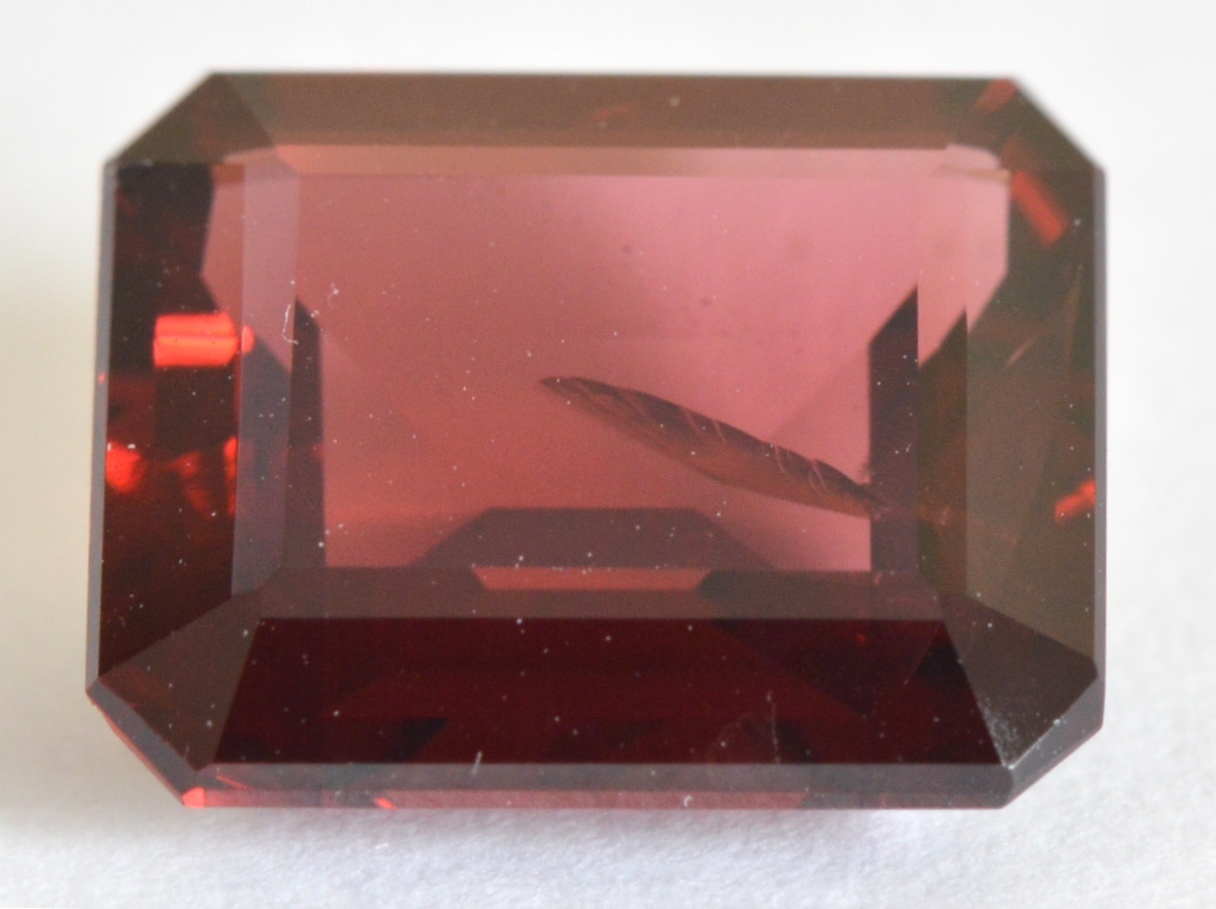 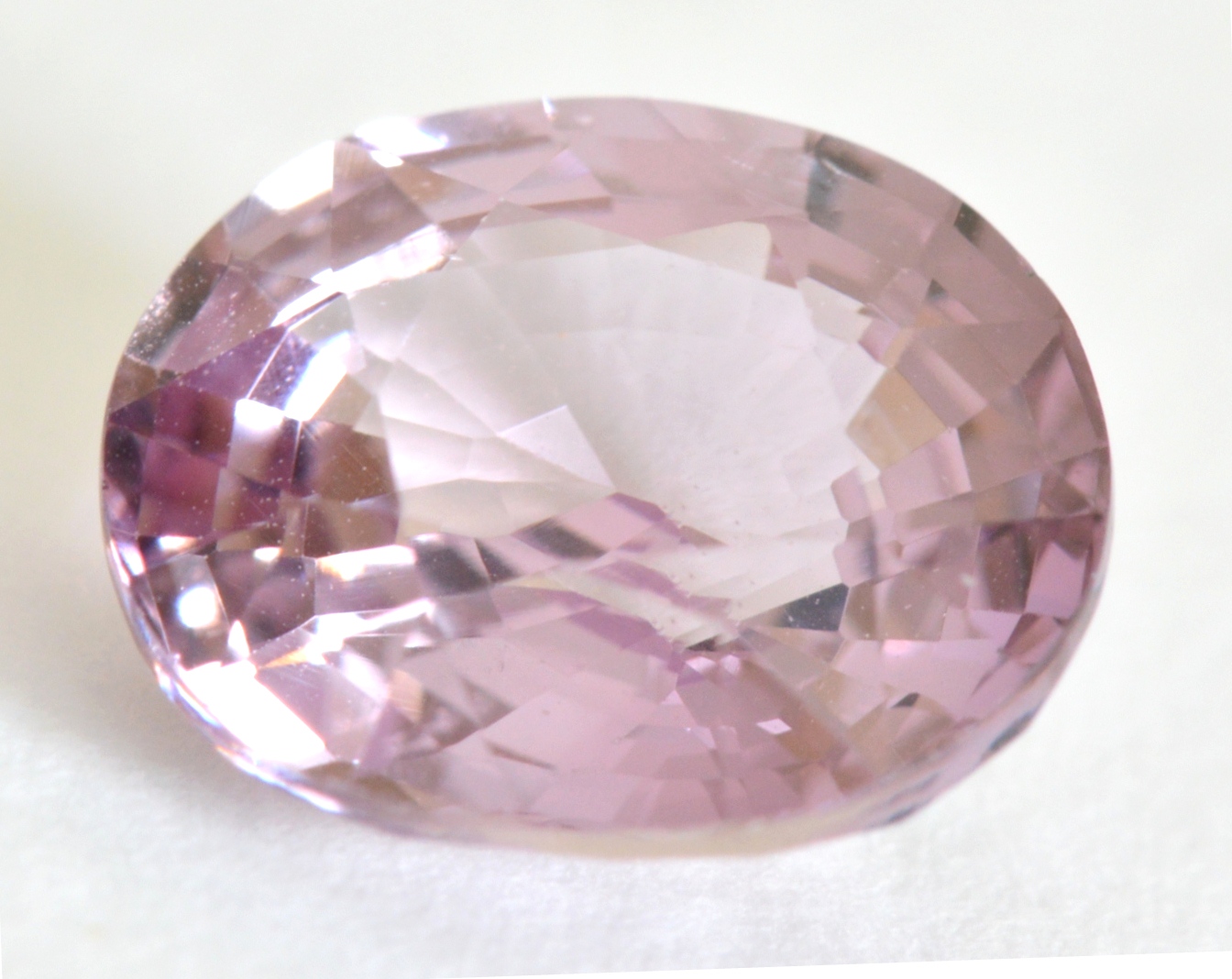 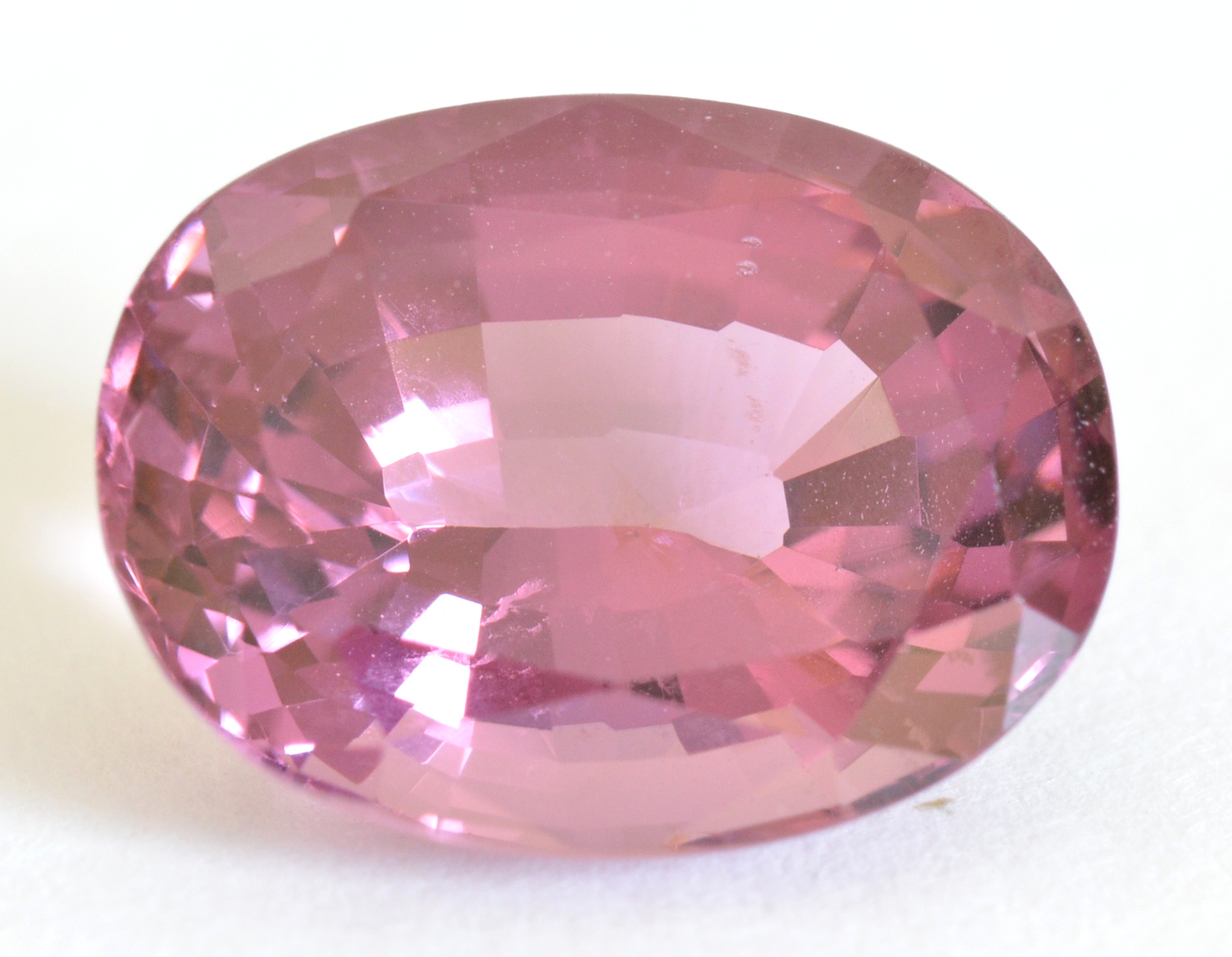 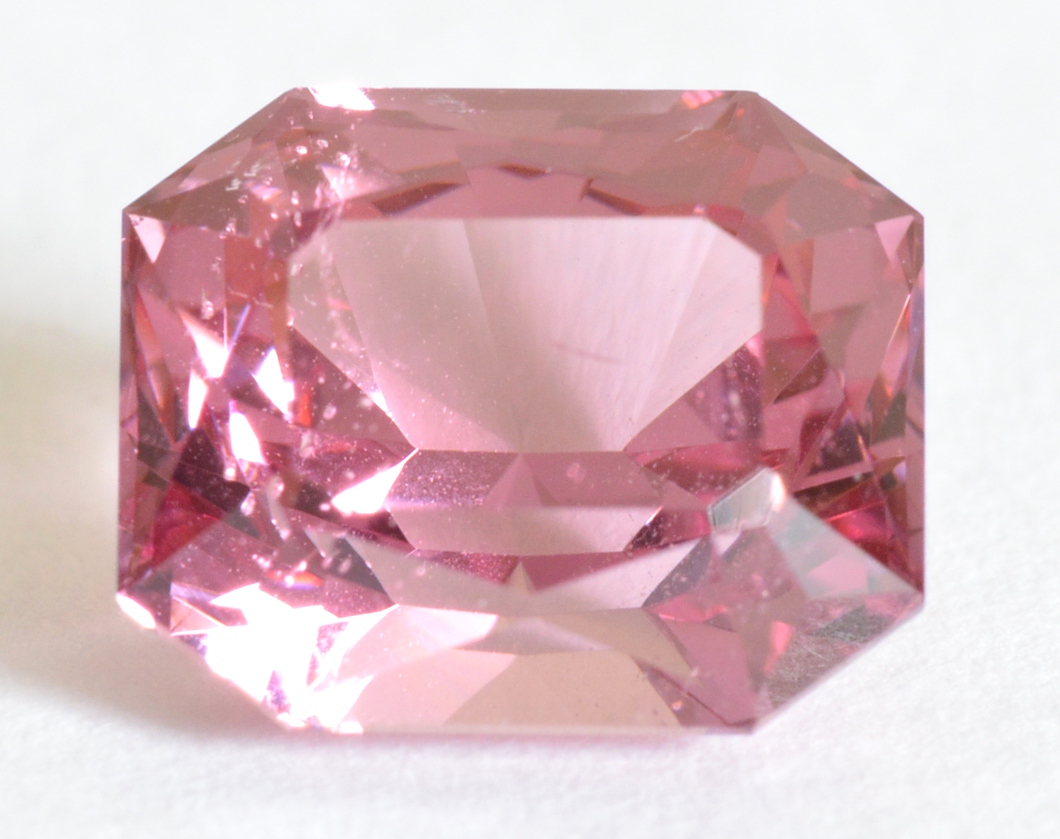 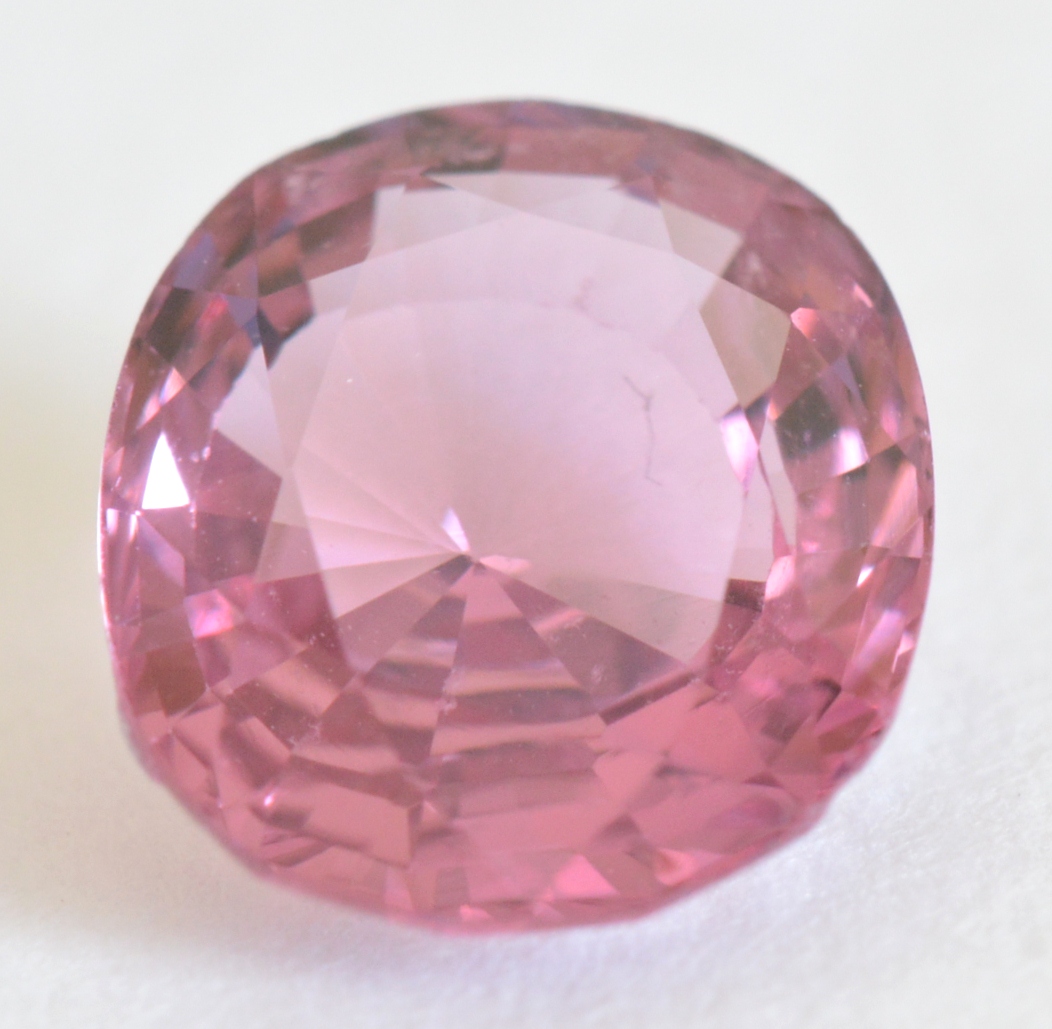 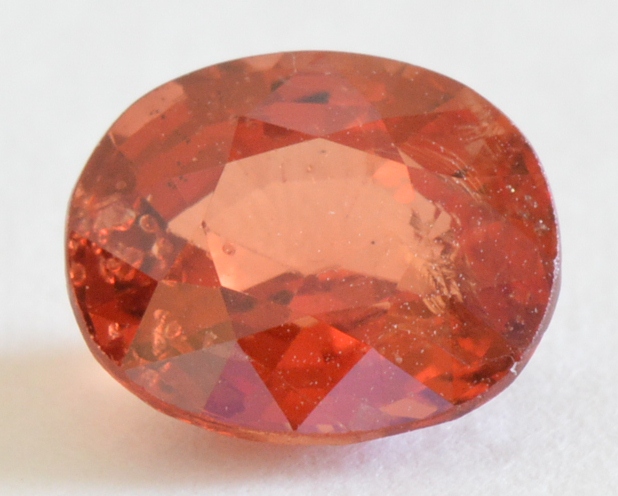 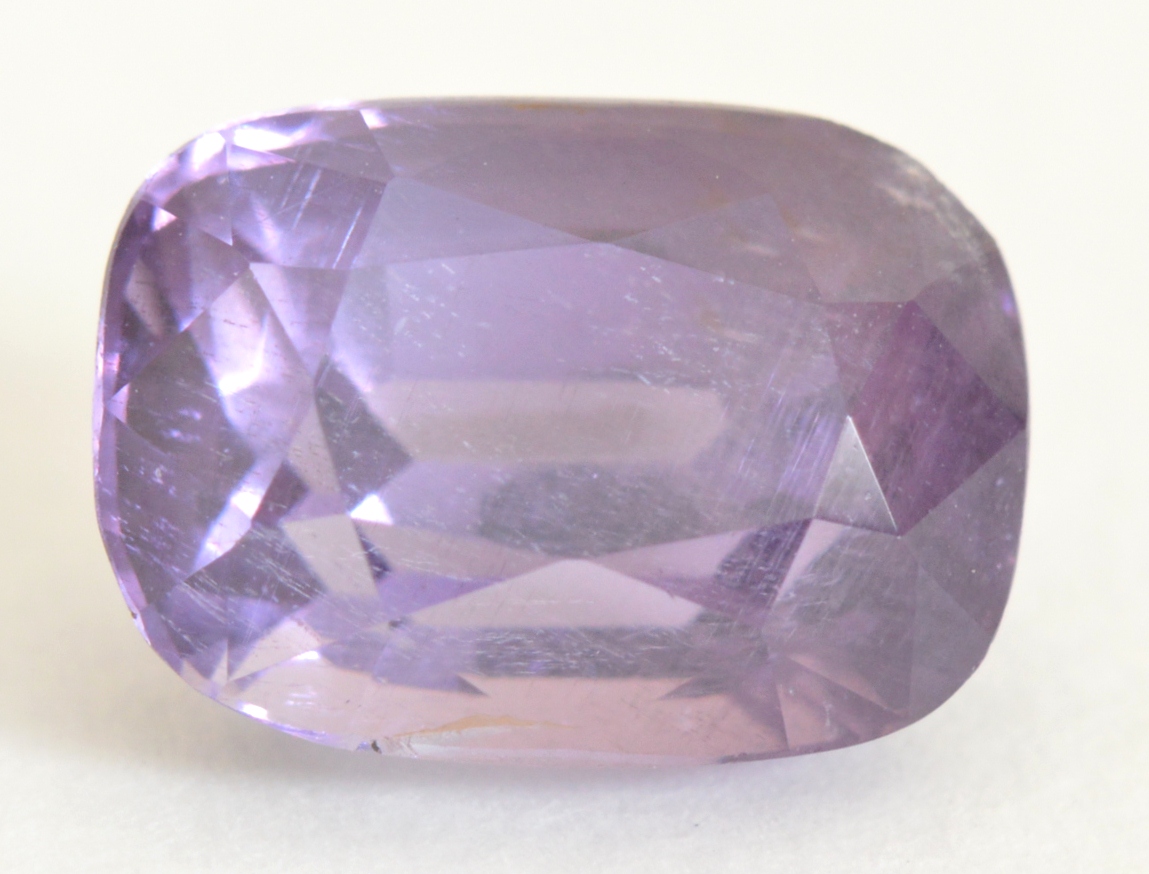 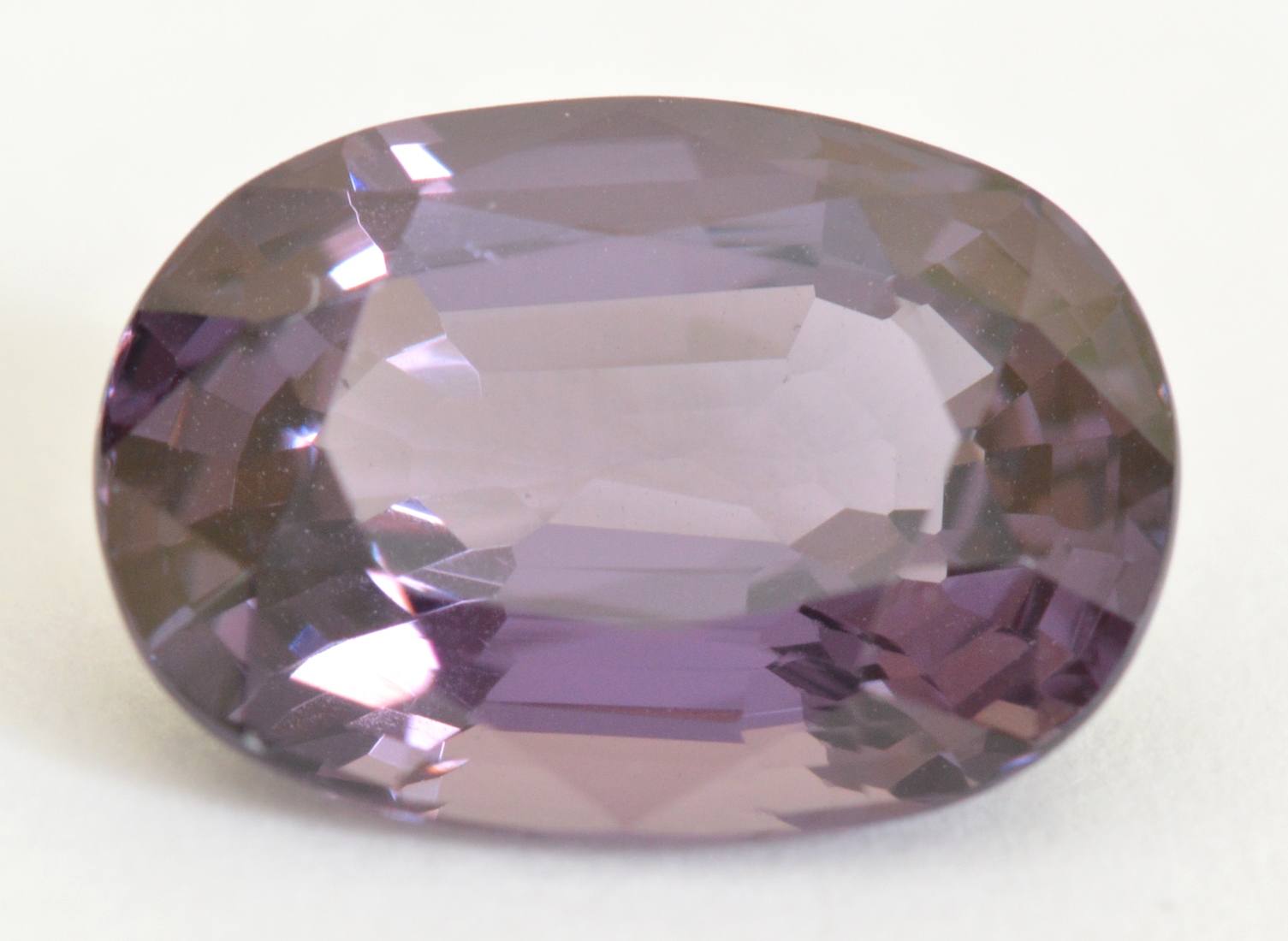 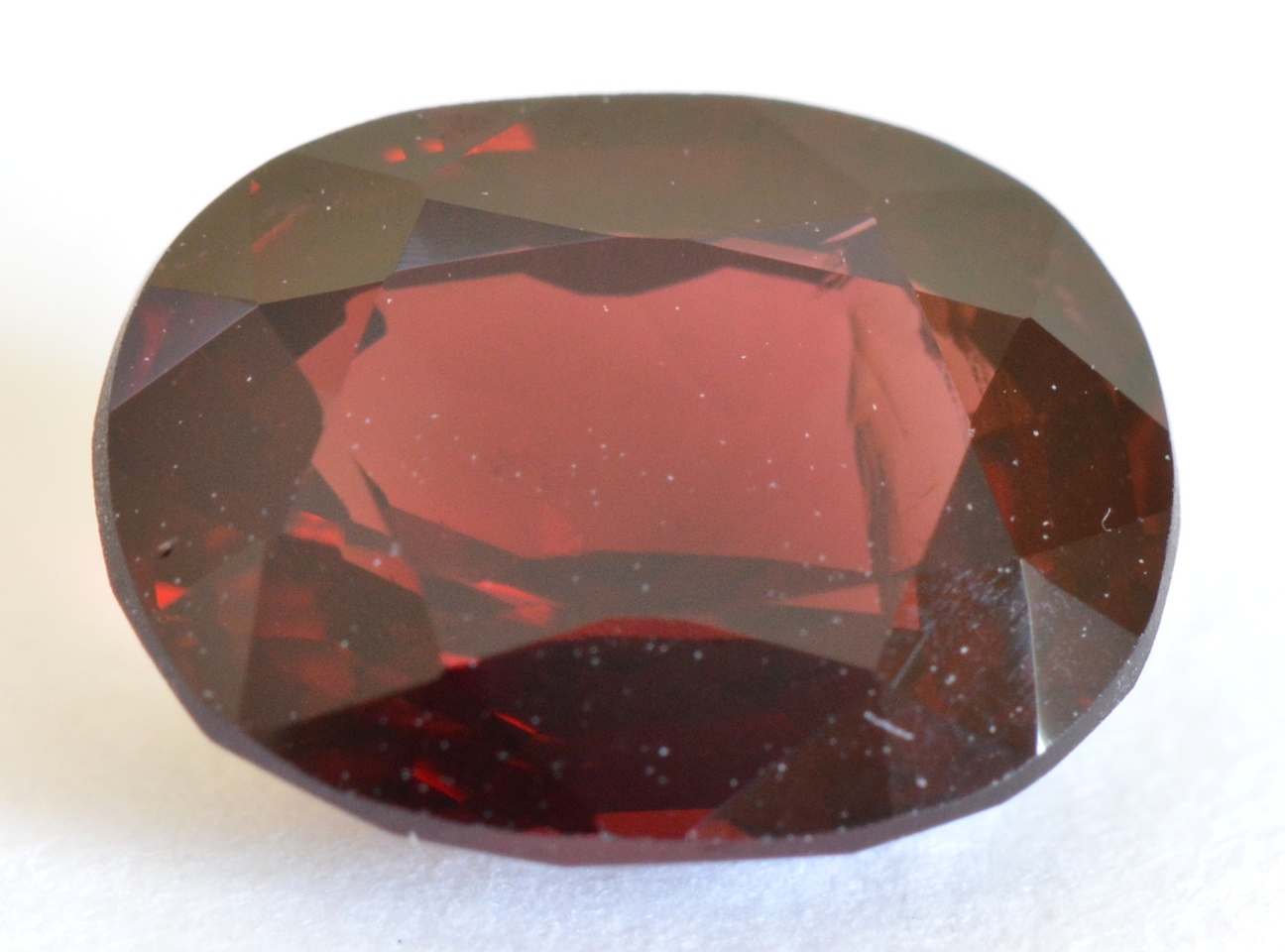 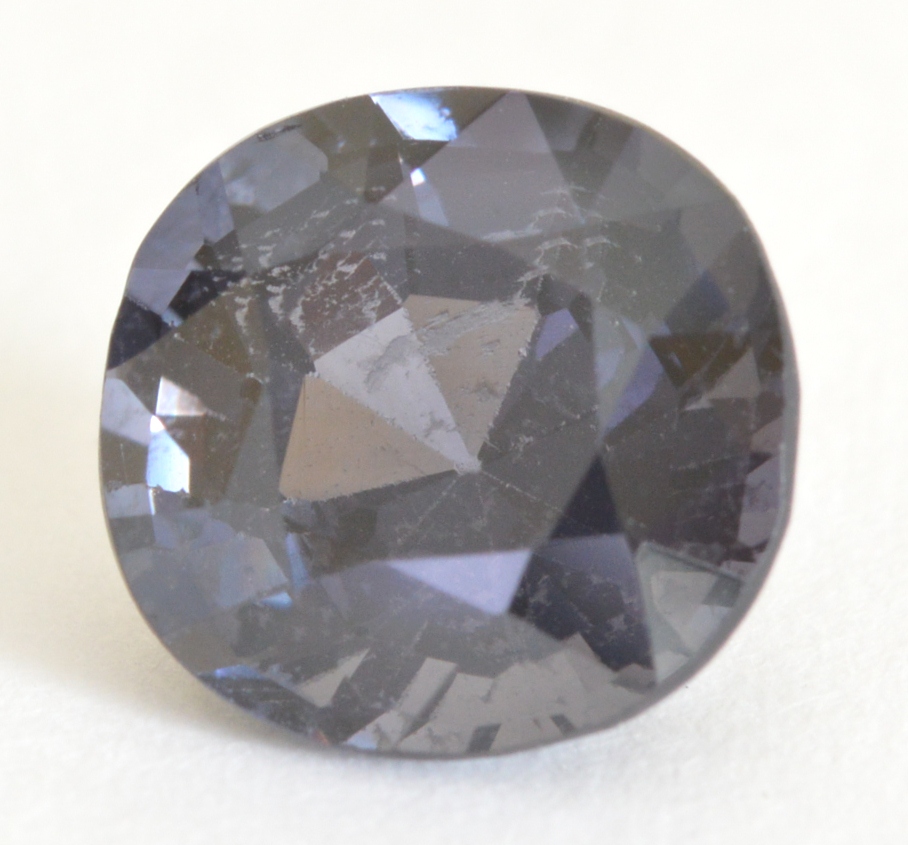 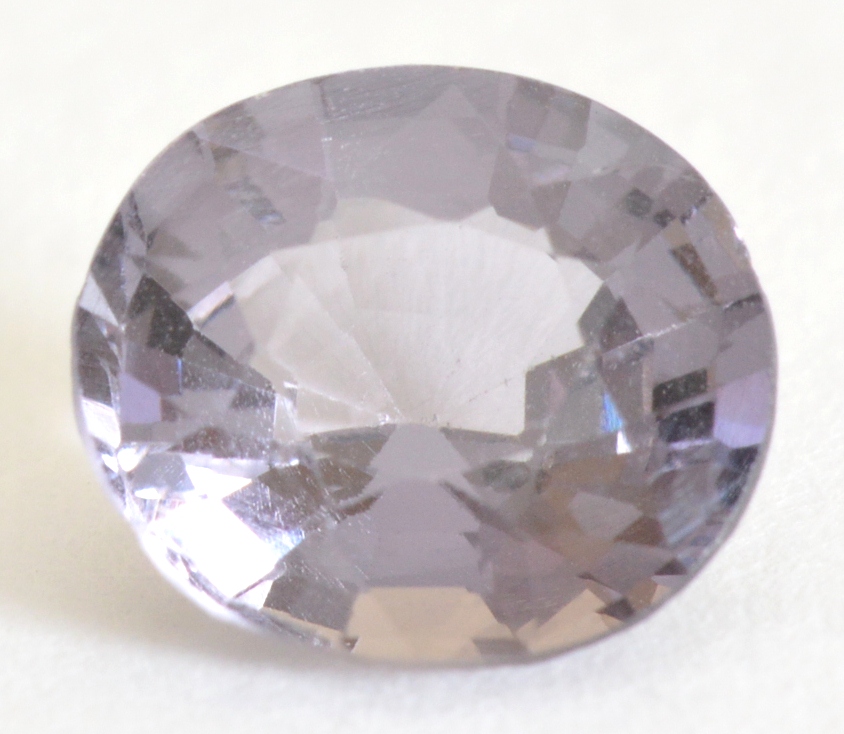 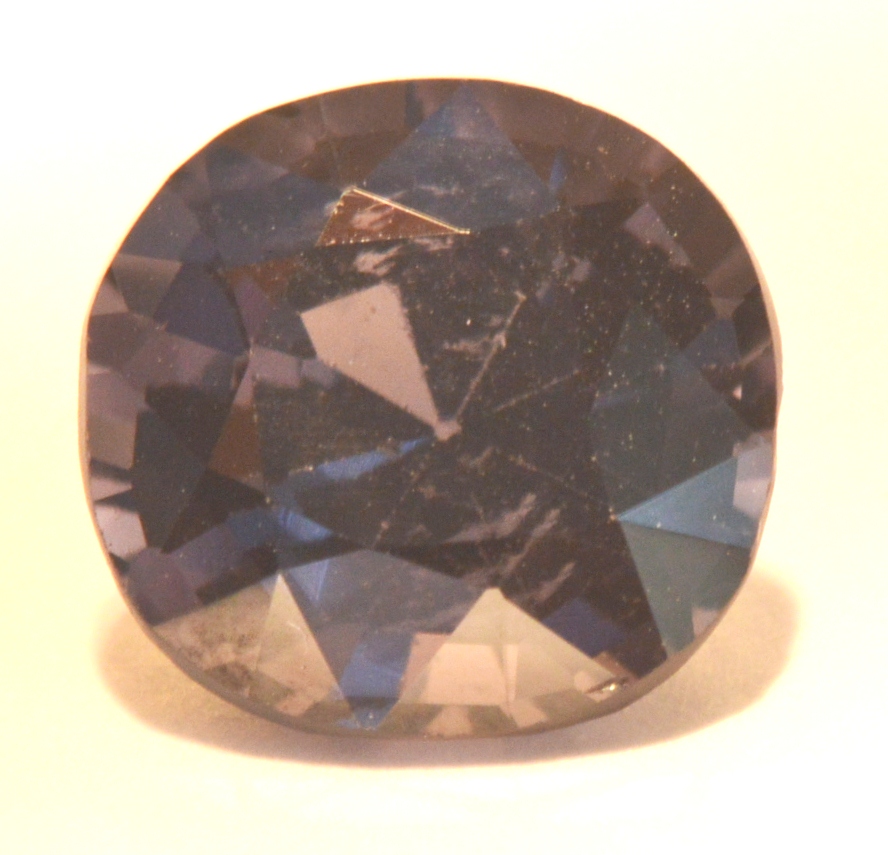 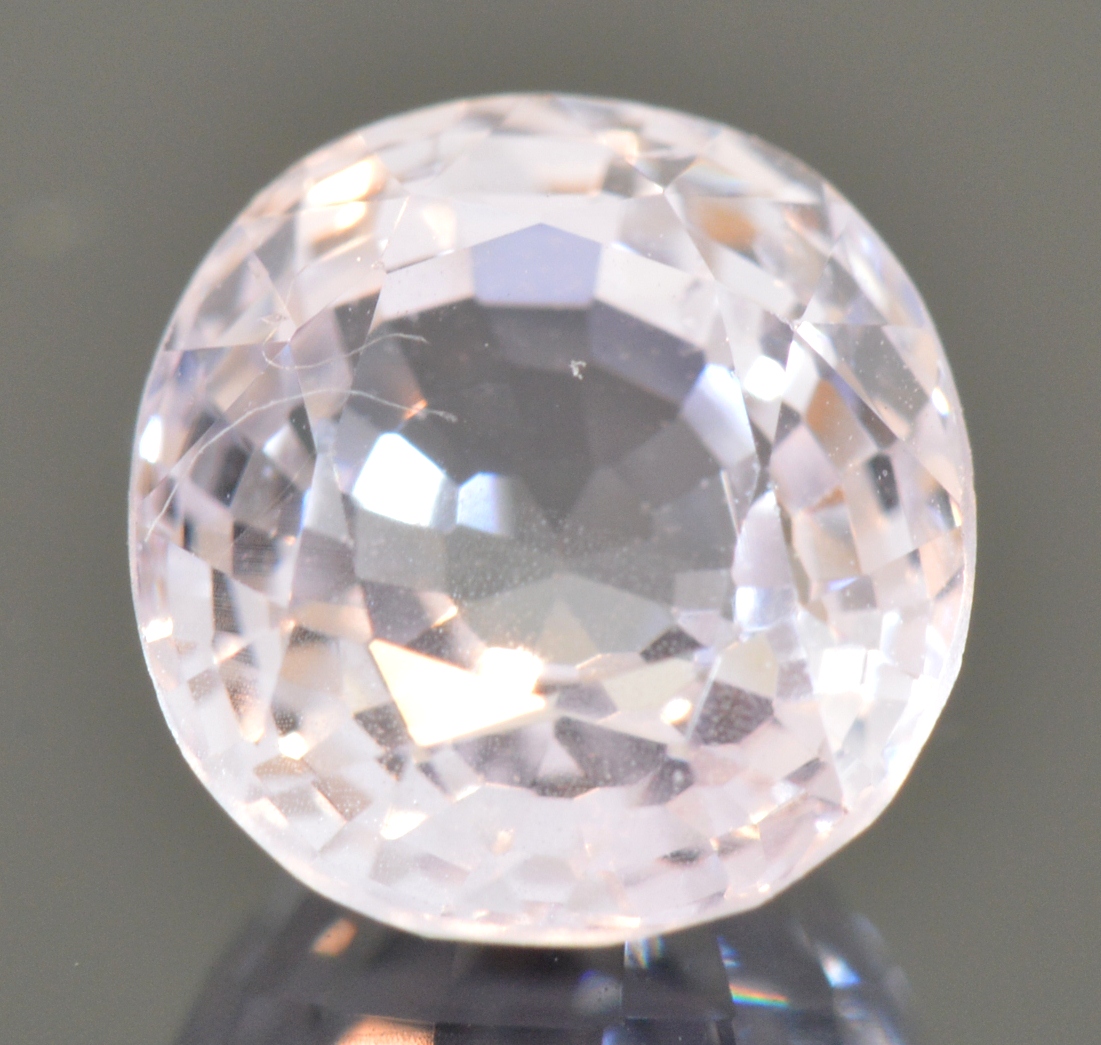 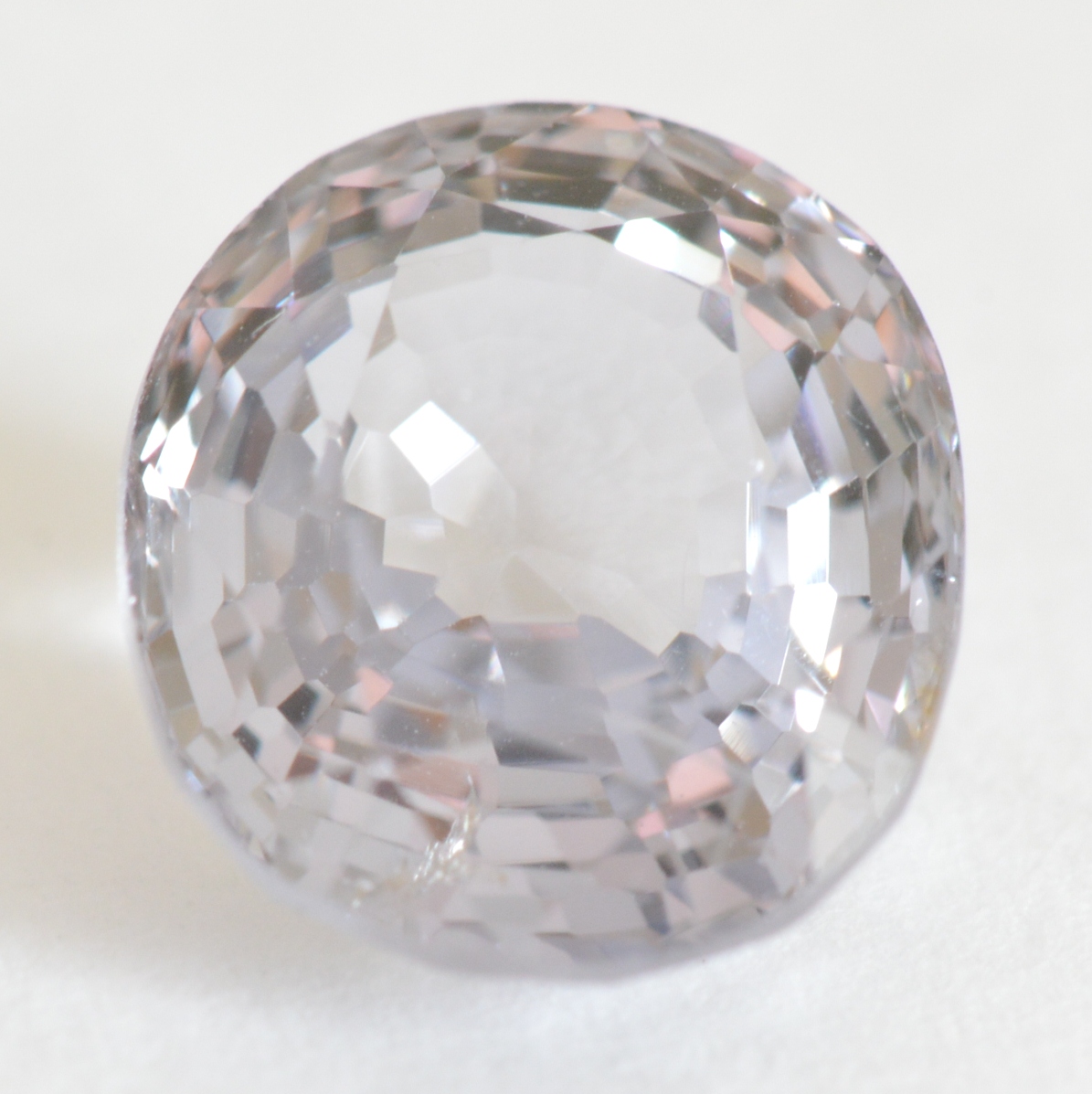 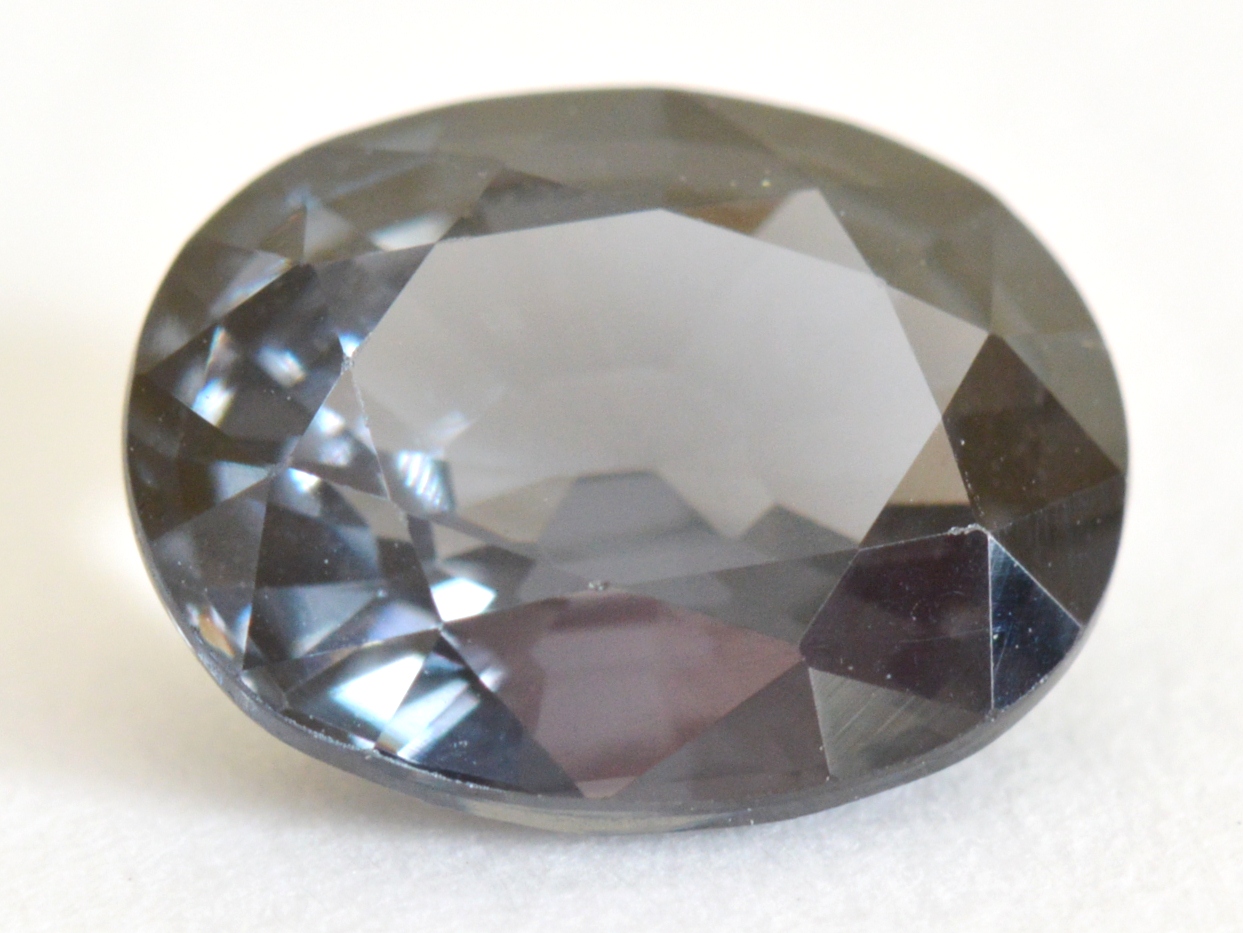 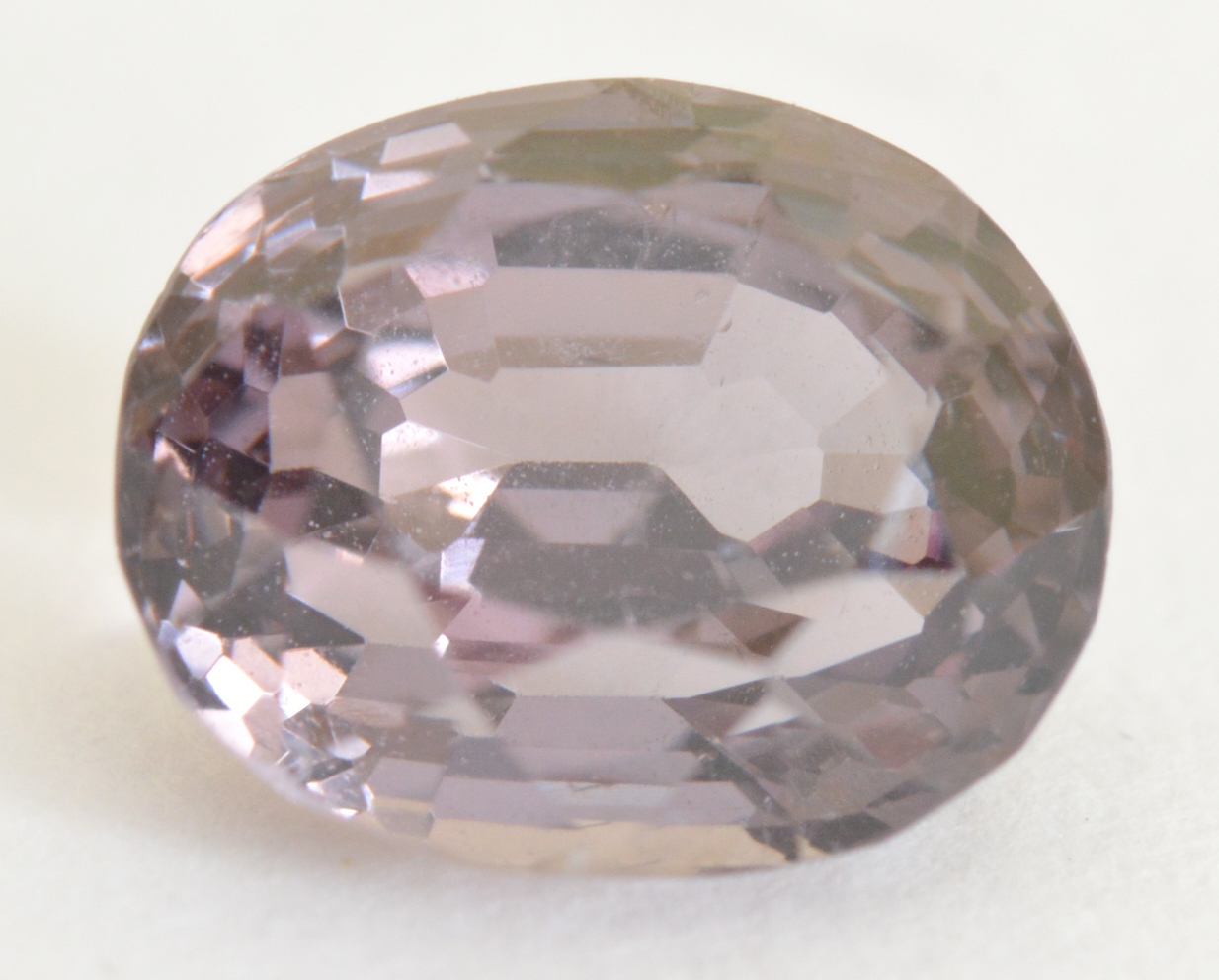 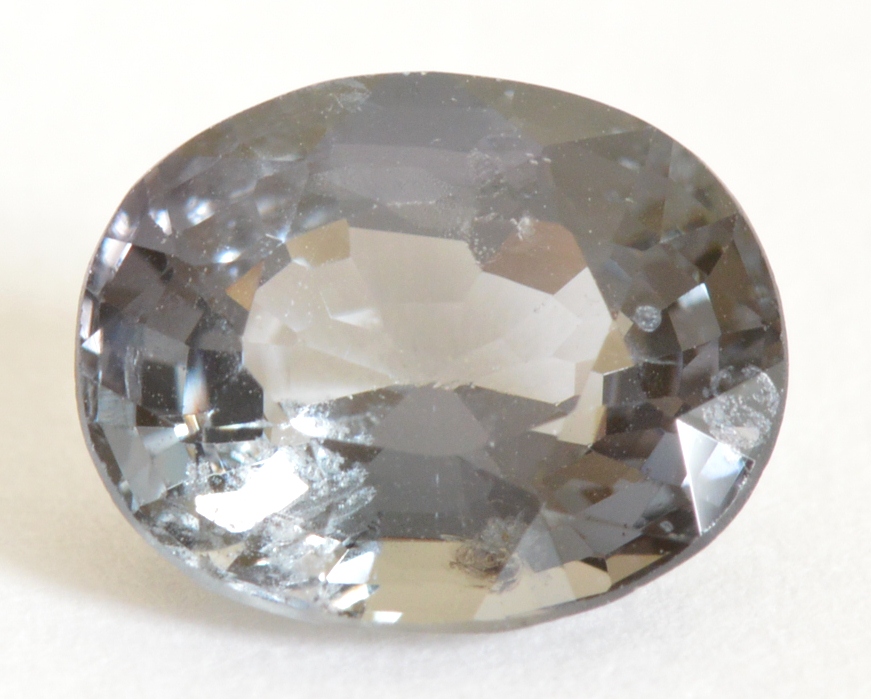 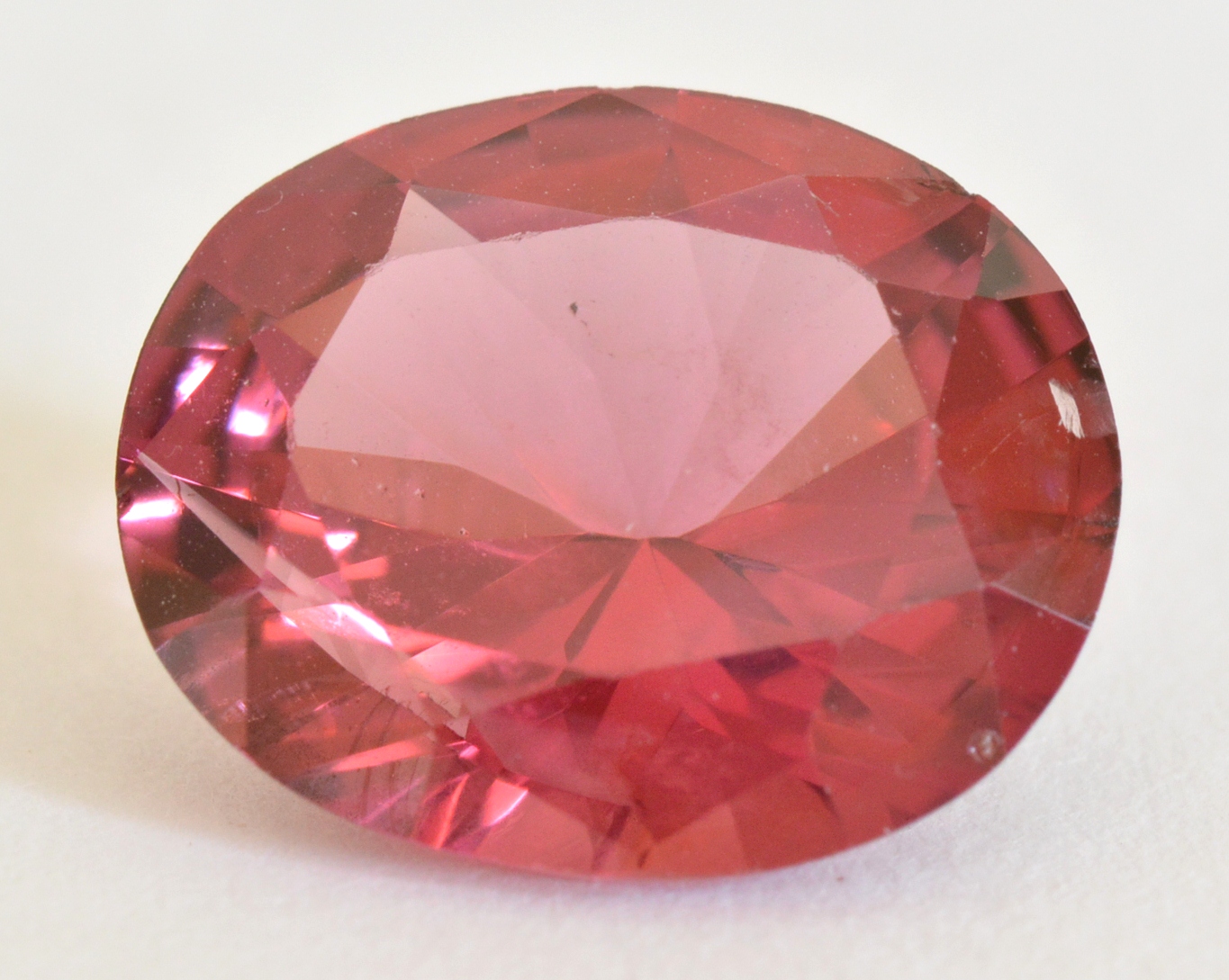 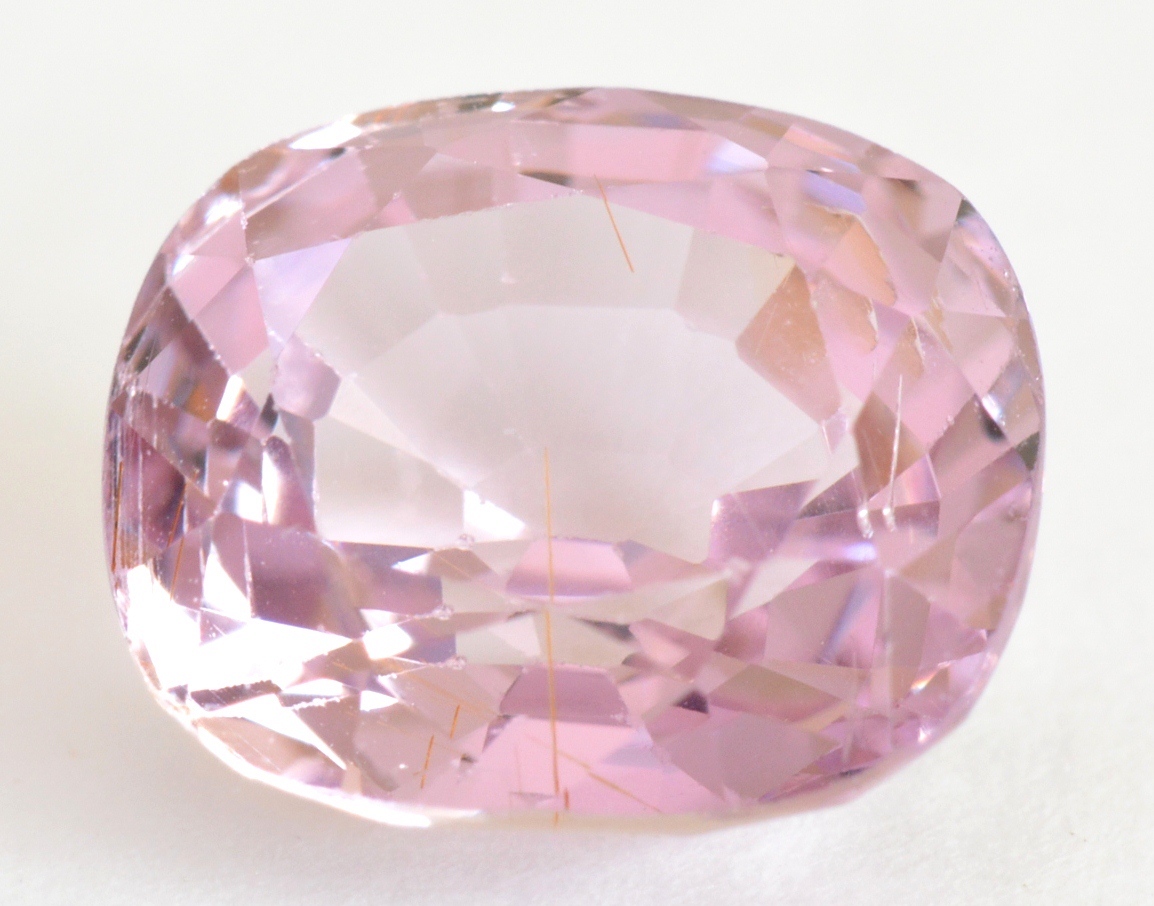 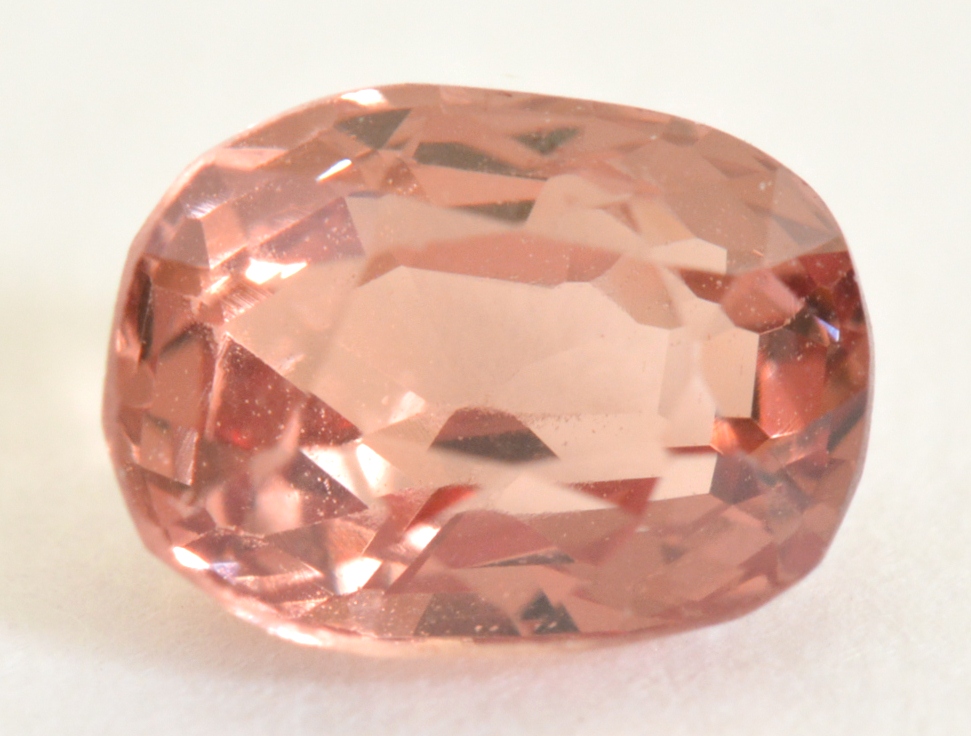 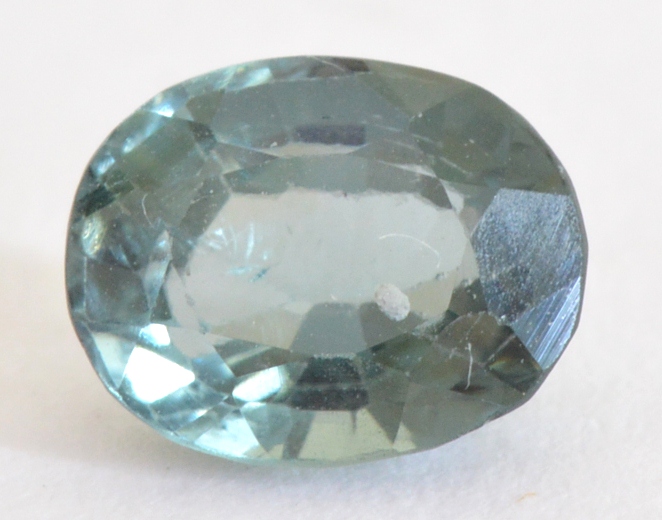 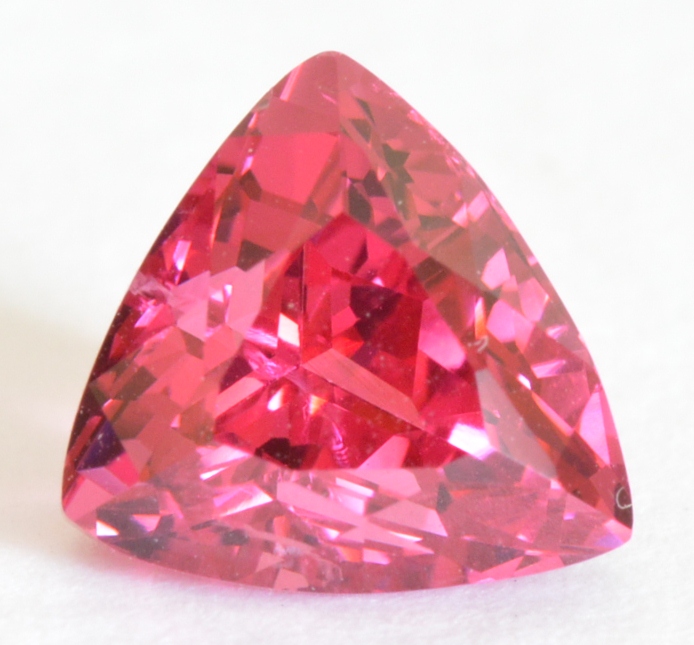 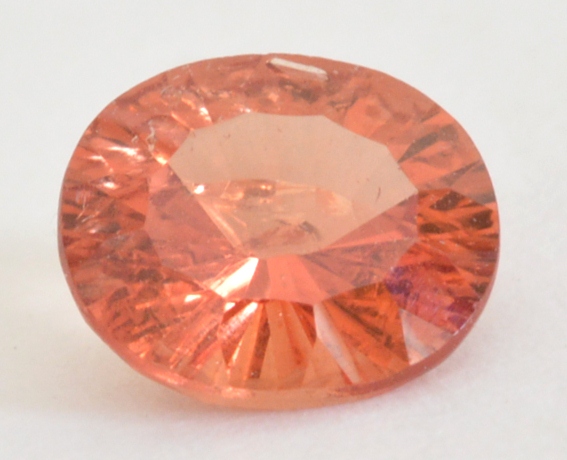