Pastel Pyropes have the lowest refractive index range of all transparent gem Garnets. Among all gem Garnets, only translucent Hydrogrossular Garnet has a lower R.I. range. The low RI range of Pastel Pyrope is possibly due in part to mixing with Hydrogrossular, something Pastels share in common with other Garnets that have Pyrope-Spessartine content. Pastel graph points occupy a unique section of the Pyralspite ternary near the pure end member, indicating that the chemical composition of Pastels is distinct from other Garnet varieties. This study suggests that Pastel Pyrope merits classification as a separate variety of Pyrope. Below is a graph of 40 Pastel Pyrope gems.

Purple: Purple color is found in some Pastels (as illustrated by the 2 oval gems shown below), and this color is usually lighter in tone than purple Rhodolite, another variety of Pyrope. Color can be pure purple or pinkish purple, with less red than Rhodolite. The pink color component is likely due primarily to chromium and possibly iron. The blue component that combines with pink to create the purple color is linked to higher Spessartine (Mn2+), lower Almandine (Fe2+), and perhaps even to lower titanium content than in Rhodolite. Pastels like those pictured below exhibit color change from purple in daylight to pink in incandescent light.

Pastel Pyrope is a rare and often beautiful variety of Pyrope that is virtually unknown to gemologists. The unique identifying characteristics of this variety of Garnet are established here for the first time as part of our Garnet study. Pastel Pyrope gems are typically lighter in color compared to Standard Pyrope and Chrome Pyrope, with colors ranging from pink to purple to light brownish red (maroon), and even orangey red. Some Pastels show color change in incandescent light. We even encountered a rare Pastel Pyrope that is primarily yellow in daylight. No blue or green Pastels have yet been encountered.

Searching for Pastels: Pastels are difficult to find not only because they are rare, but because they are never sold by that name. All Pastels collected for this study were sold as Rhodolite, Malaya, Umbalite, Color Change or Grossular Garnets. A yellow Pastel Pyrope was sold as Imperial Hessonite. These Pastel Pyropes were subsequently distinguished from other Garnet varieties by their Drag responses (rather than Pick Up responses) to an N52 magnet, and by their compositions as determined by the RIMS method. So far, we have identified 40 Pastels in a number of colors and tones.

Light pink Pastel gems like the ones shown above and below are rare - much rarer than pale pink Malaya Garnets. As with pink Malaya Garnets, most pink Pastel Pyropes derive their colors primarily from chromium. As with Chrome Pyrope, unique geologic conditions of formation among Pastels result in unusually low iron and manganese content. Light pink Pastels can look identical to light pink Malayas, and maroon Pastels can look identical to "Imperial" Malayas, but refractive indices and magnetic susceptibilities for Pastels are lower than for Malayas (i.e. Pastels have higher magnesium content).

Pastels differ from Standard Pyropes and Malaya Garnets by their higher Pyrope content (i.e. lower refractive index & lower magnetic susceptibility). Unlike most other Pyrope Garnets, Pastels are not ﻿picked up by an N52 magnet. Instead, they show only a Drag response.

Although color and composition of Pastels can be continuous with that of other Pyrope varieties (Malaya, Rhodolite and Color Change), Pastels are among the purest Pyropes, with high magnesium content, low iron content and low manganese content. The unique identification parameters established here for gems of this variety are:

1) Color saturation is usually lighter than other Pyropes

3) Drag response due to an N52 magnet

The countries of origin of most Pastel Pyrope gems that we've been able to identify are Tanzania, Madagascar and Sri Lanka.

Rare examples of Pyrope Garnet with Pastel Pyrope characteristics have been found in the form of small pink nodules within matrix in the Dora Maira Massif of the northwestern Italian Alps. These nodules are reported to have purple or pink centers and near-colorless rims. The near-colorless outer layer can be up to 98% pure Pyrope (Gaustoni et. al., 2001). A rare faceted example of pink Pyrope that we were able to acquire from this region of Italy showed the lowest magnetic susceptibility of any Pyralspite Garnet we have tested (472 X 10(-4) SI), with the exception of a single Chrome Pyrope (an anthill Garnet from Arizona) that had a slightly lower measured susceptibility. The faceted Pastel Pyrope from Italy shown below has an approximate composition of 88% Pyrope and 12% Almandine.

Red: If we categorize Pastel Pyropes according to their unique composition rather than the light color saturation that their name suggests, then we find that not all Pastel Pyropes are pastel in color. Some can appear dark red (as pictured below), similar in color to red Malayas or Standard Pyropes, but with much lower magnetic susceptibility.

Red gems with Pastel Pyrope composition derive color mainly from Fe2+ (Almandine), and contain very little Spessartine. Their graph points hug the Pyrope-Almandine join at the low end of the Pyralspite ternary, and these gems have major compositions similar to that of Chrome Pyropes (which are discussed on the next page), but with a much lower concentration of chromium than Chrome Pyropes. Like Pastel Pyropes, Chrome Pyropes show a Drag response rather than a Pick-up response.

Aside from our study presented here, nothing has been written about Pastels since Carol Stockton first published a short paper titled Pastel Pyropes in the Summer 1988 edition of Gems & Gemology. Stockton examined a few samples of these unusual Pyropes with low refractive index, emphasizing how they could be separated from Grossular Garnets using a refractometer and spectroscope. Stockton coined the term Pastel Pyrope, using it primarily as a descriptive term rather than as a variety name. Our interest in Pastel Pyropes stems from Stockton's preliminary work. Based on her descriptions, we collected and graphed 40 Pastels for our study in an attempt to learn more about the chemical composition and identifying characteristics of these elusive gems.

Pink: The Pastel Pyrope with the highest Pyrope content (after the pink gem from Dora Maira Massif) tested in our study is shown below (left). This small orangey pink gem from Bekily, Madagascar has a low refractive index of only 1.728, and is nearly 87% Pyrope based on our calculations, although any Grossular content would lower that percentage. Typical red Standard Pyrope averages 68% Pyrope. This Pastel gem may derive it's pink primarily from iron rather than chromium. Unlike most pink Pastel Pyropes, it shows no UV fluorescence from chromium. The orange color component is the result of manganese.

The 1.31ct. light pink Pastel Pyrope trillion from Tanzania shown below (right) is one of the palest Pastel Pyropes we have encountered. It's light pink color is primarily due to chromium, and it shows red UV fluorescence. This gem is 78% Pyrope. Although lighter in color than the oval on the left, the trillion is more magnetic due to higher manganese content (Mn2+, Spessartine). The manganese contributes little if anything to color. Rutile needle inclusions are common in Pastel Pyropes.

Most light pink Pastel Pyropes, such as the pink gem from Tanzania shown below, fluoresce pink or red under longwave UV light due to the presence of chromium. Chromium fluorescence in these Garnets is only possible due to the relatively low iron content. Magnetic susceptibility in fluorescent Pastels is due primarily to manganese rather than iron.

Other Pyralspite Garnets we have found that fluoresce pink or red under UV light are some light pink Malaya Garnets from Tanzania, as well as some low-iron Color Change Garnets. All these fluorescent Garnets also glow pink under a Chelsea filter due to chromium content. The iron content is very low in Pyralspite Garnets that fluoresce, with most of the magnetic susceptibility coming from manganese, which does not quench chromium fluorescence.

The gem pictured below has relatively low iron content, with a composition of approximately 84% Pyrope, 7% Almandine and 9% Spessartine. Almandine (iron) content may be even lower if Grossular content (up to 5%) is also present. The percentage of chromium in this gem, and in any Pyralspite Garnet, is difficult to assess with a spectrometer, as results for chromium overlap with iron and manganese. 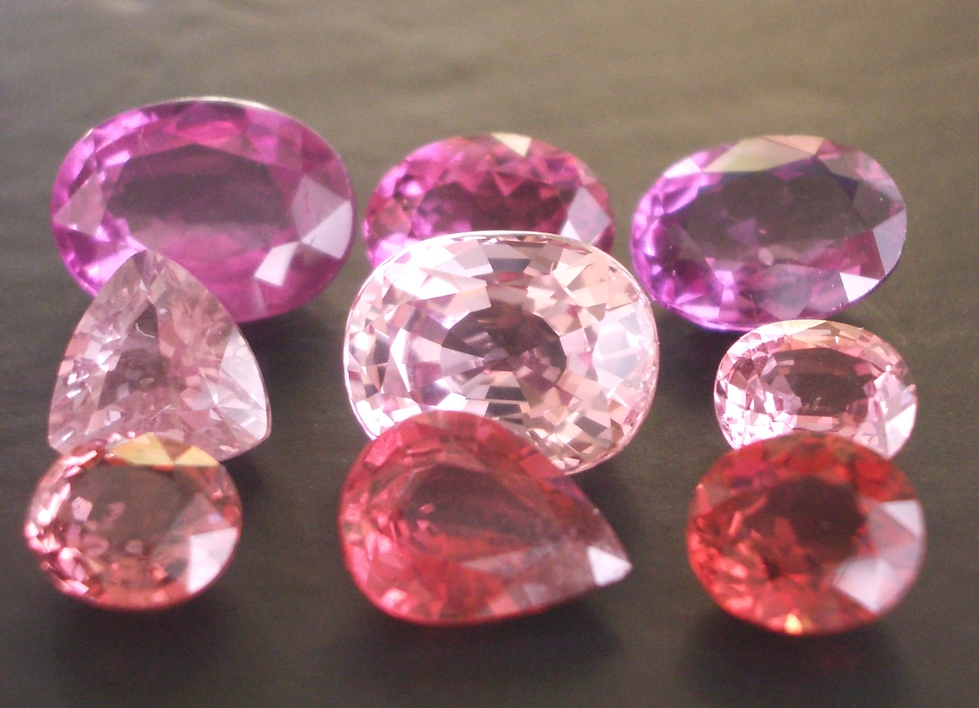 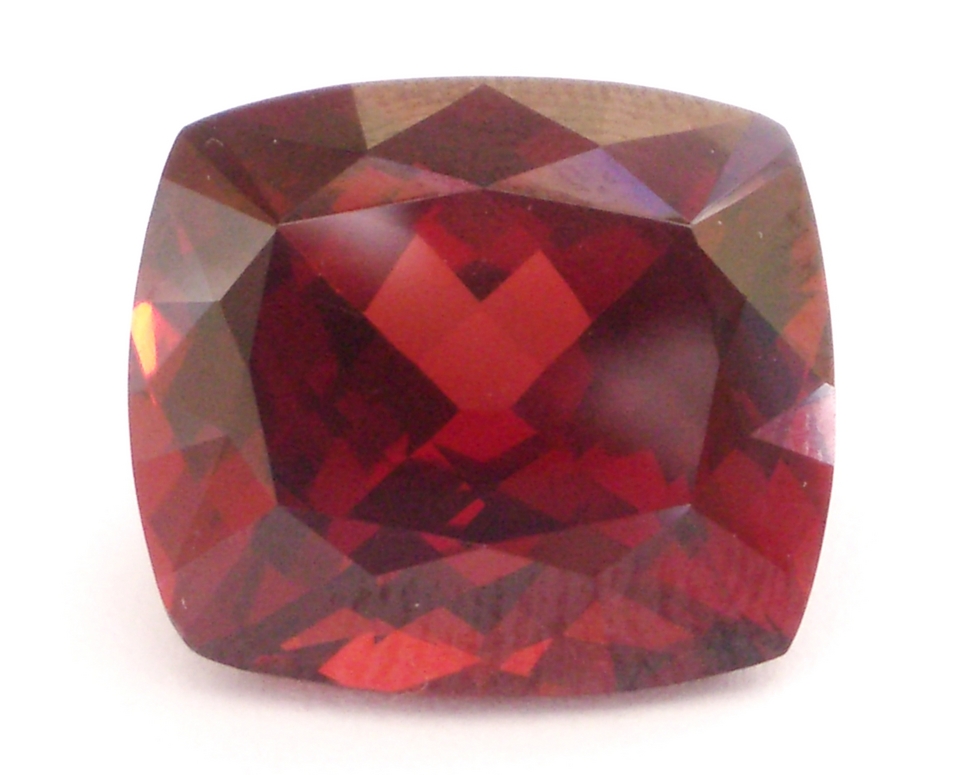 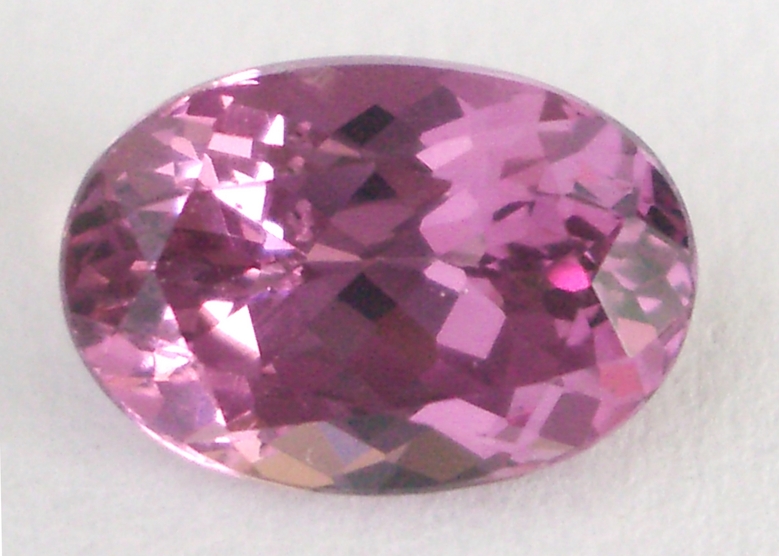 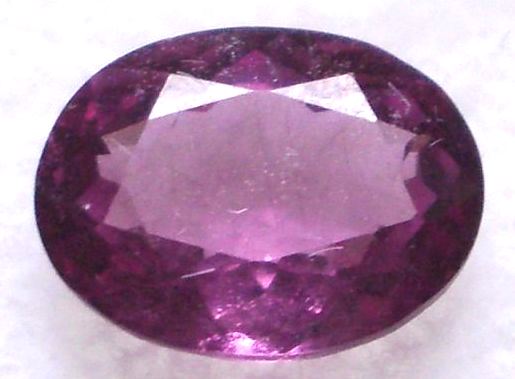 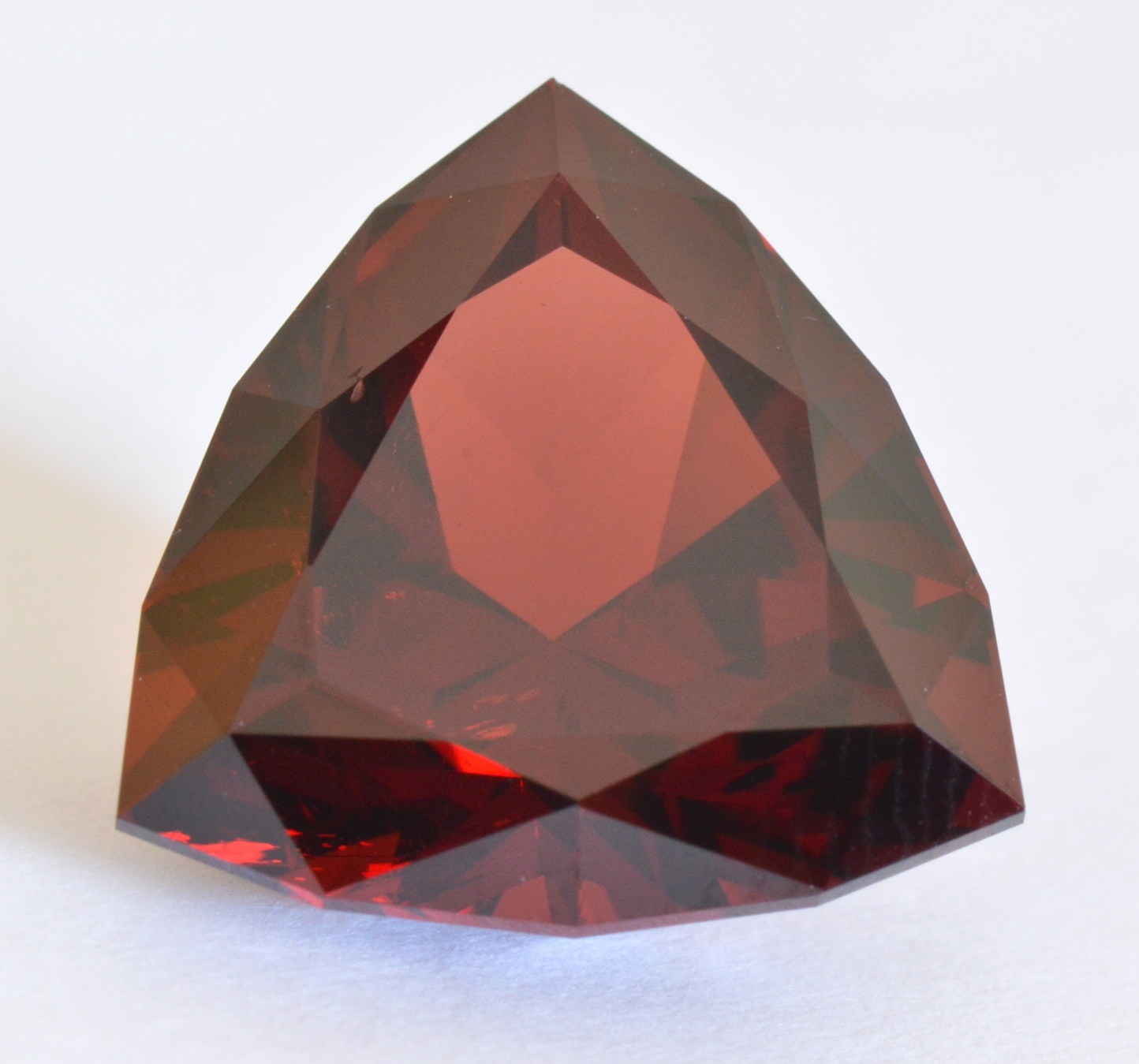 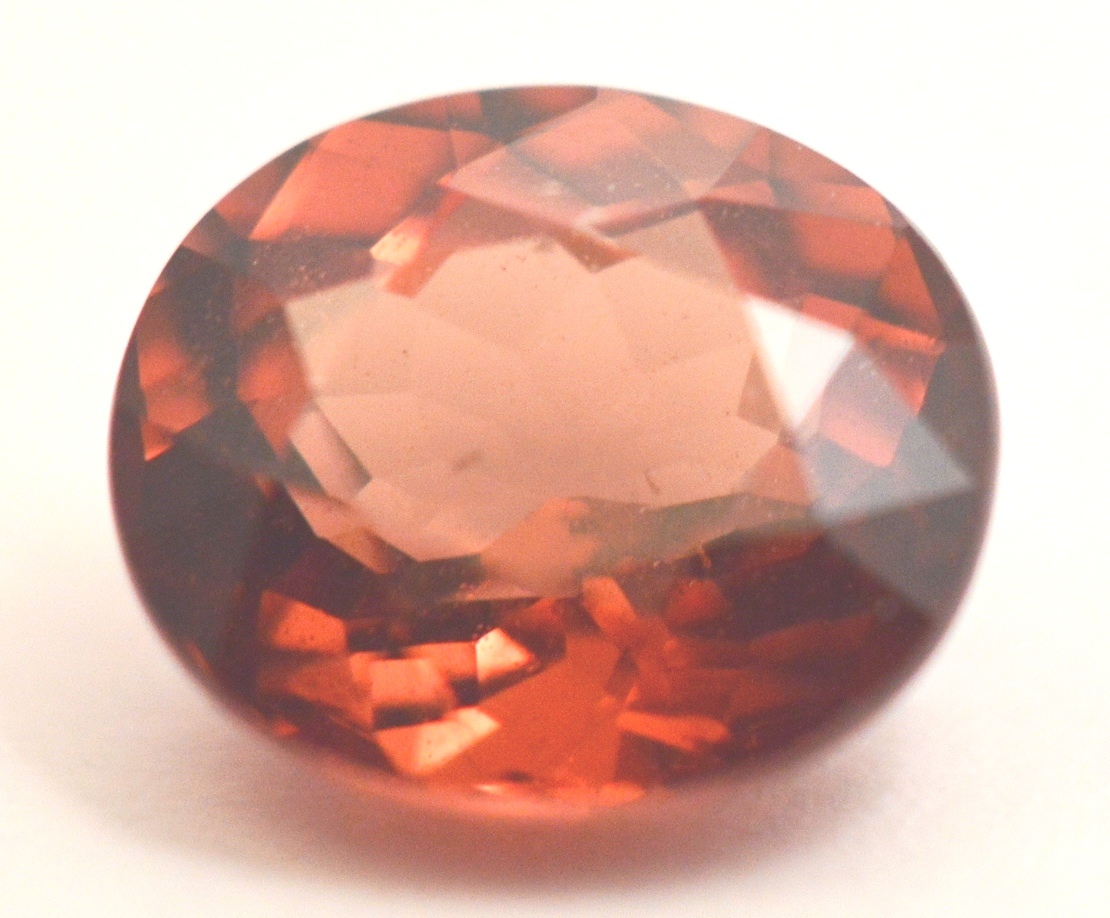 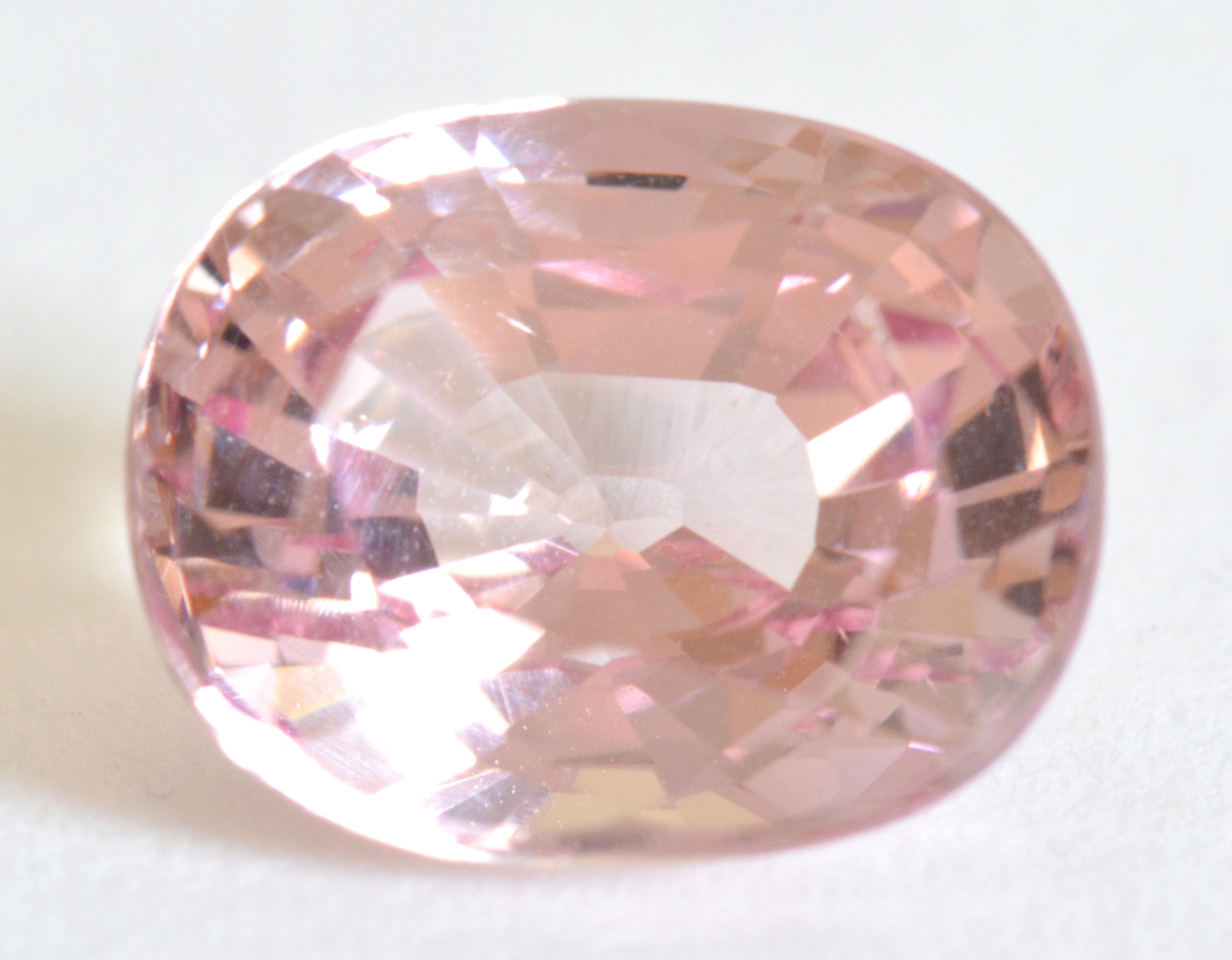 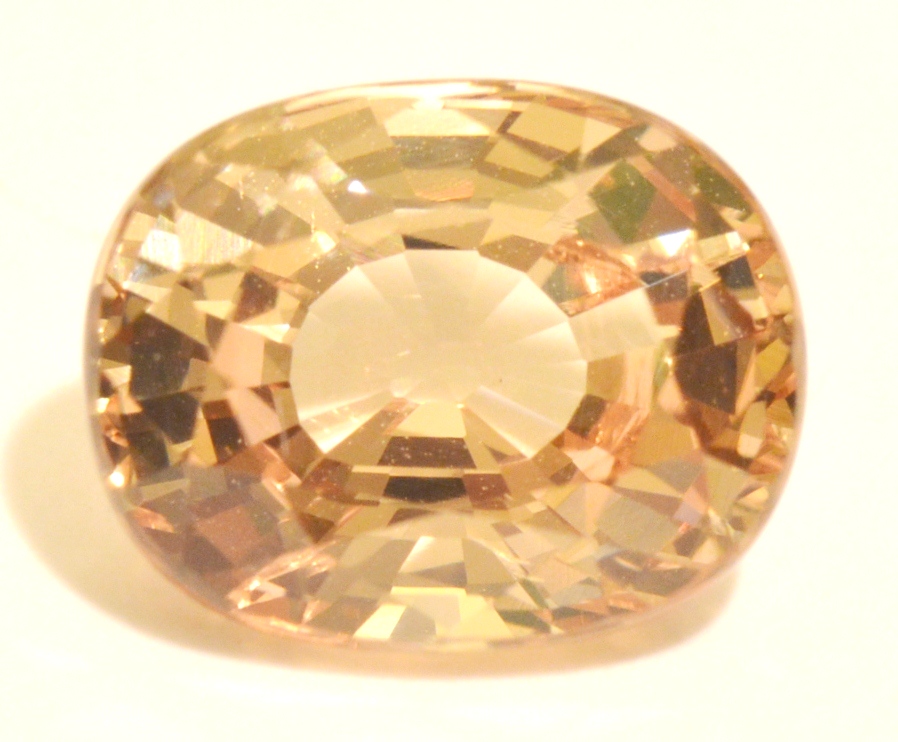 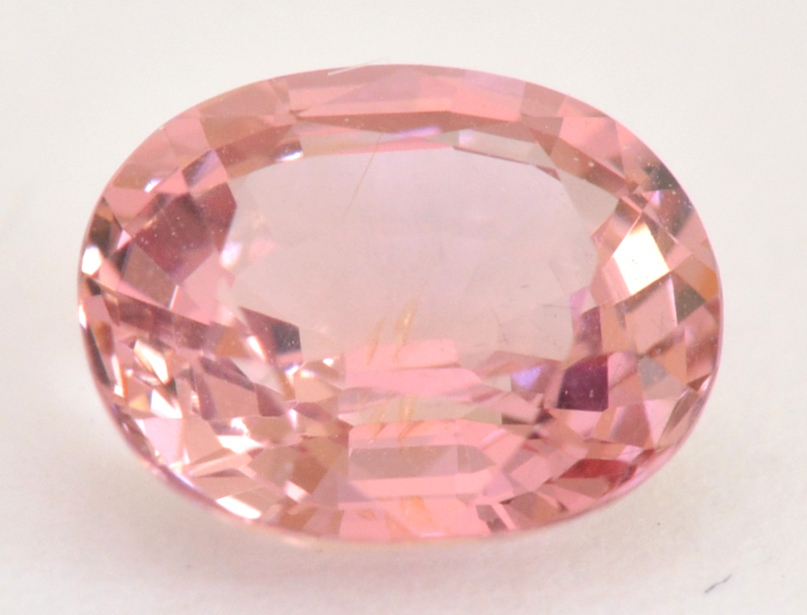 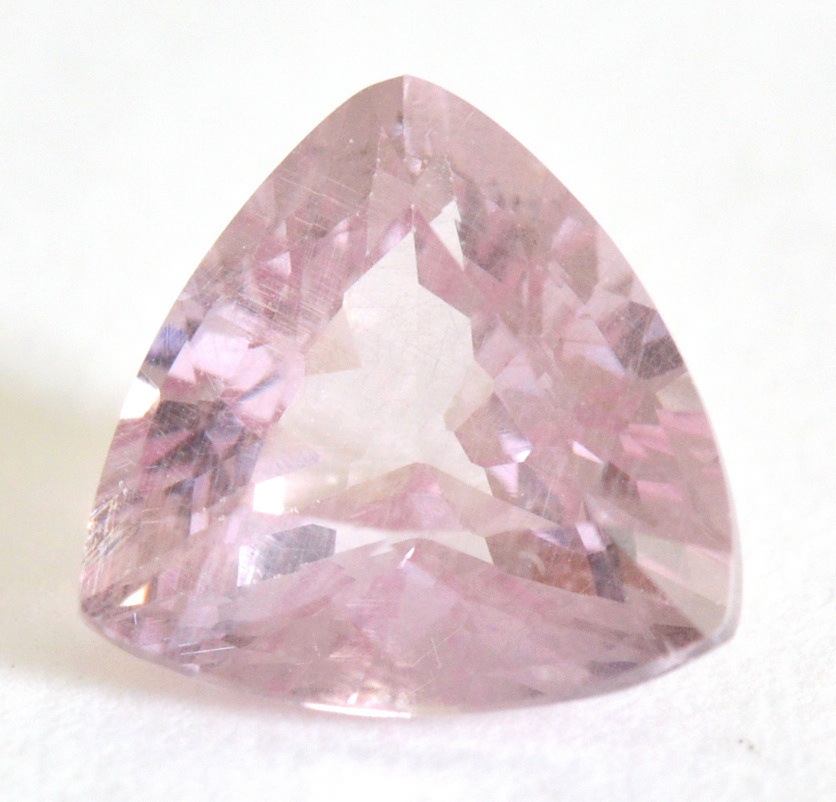 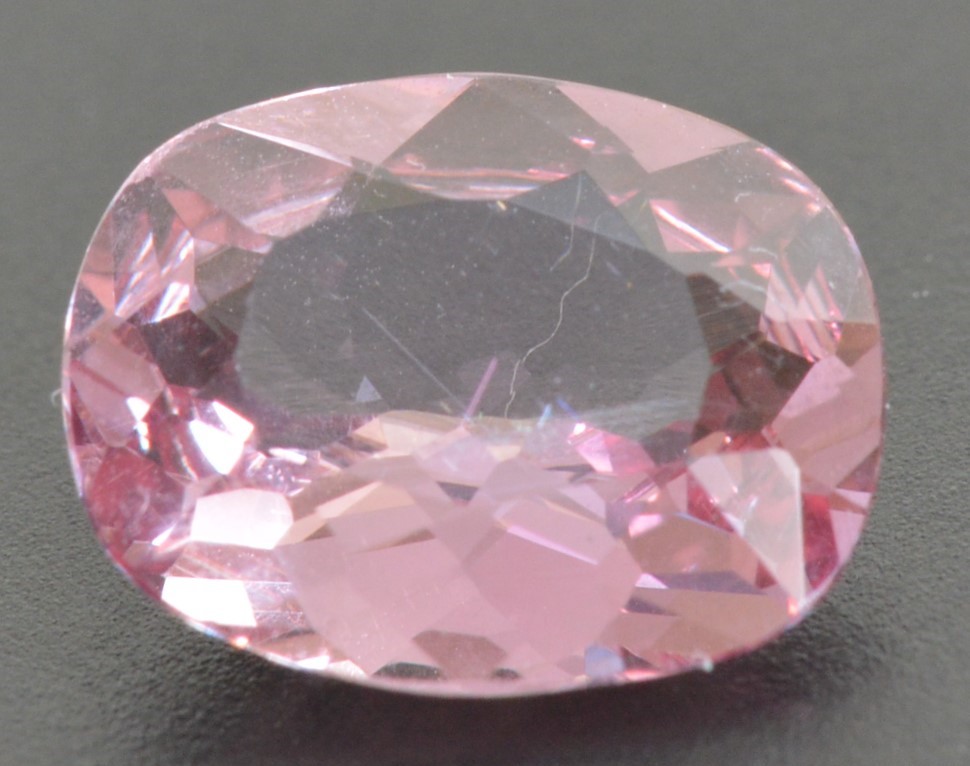 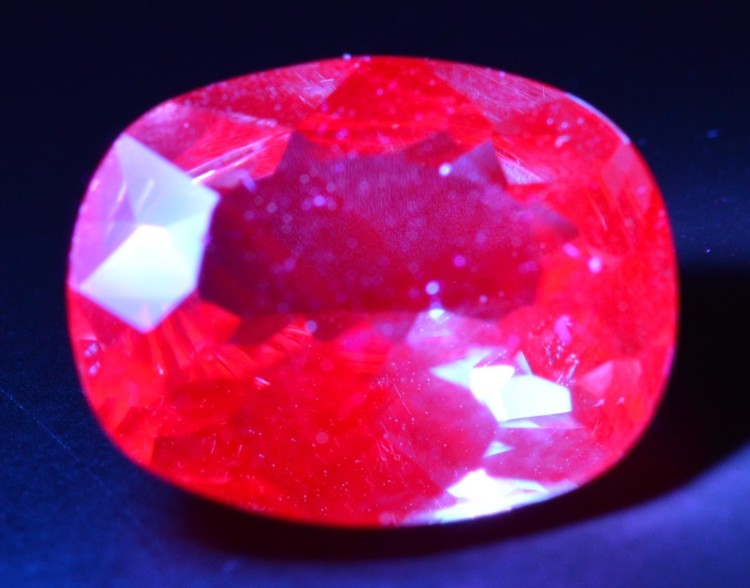 Yellow: One highly unusual Pastel Pyrope (pictured below) discovered in our Garnet study showed yellow as the primary daylight color, with pink as a secondary daylight color. This gem was sold as Hessonite Garnet, as the RI 1.733 is similar to light orange Hessonite. But this is a different species entirely. This is the only Pastel Pyrope we have encountered that exhibits yellow color in daylight. The composition of this pale gem is approximately 76% Pyrope and 24% Spessartine, with very little iron from Almandine. Spectrometer analysis confirms high manganese and low iron content.

The mechanism responsible for yellow daylight color in this gem in contrast to pink daylight color in other Pastels that we have analyzed with similar major composition is not known, but it likely involves a greater proportion of manganese in relation to chromium. The yellow color is derived from manganese, and the pink color is likely derived primarily, or perhaps entirely, from chromium. This gem fluoresces red in long wave UV light due to chromium.

Brownish Red: The color most frequently seen in Pastel Pyropes is light brownish red. Only one gem with orange as the primary color (pictured below right) has been encountered in our study.

Most Pastel Pyrope gems of average size show a Drag response, which separates them from all other Pyralspite Garnets except Chrome Pyrope. Higher refractive index, higher SI values and Pick-up responses in light-colored Pyropes indicate Malaya Garnet, Rhodolite or Color Change Garnet rather than Pastel Pyrope (although some Rhodolites and Malayas barely pick up).

Variety Name: The same gem material as shown above was tested and classified by GIA researchers as a Pyrope Garnet that shows color differences between daylight and incandescent light (Ziyin Sun et. al., 2015). Although the GIA researchers recognized that this material has a much higher Pyrope content than typical Color Change Garnets, they chose not refer to it as Pastel Pyrope. GIA generally does not recognize trade names or designate names for color varieties when classifying gems of any species. However, we think its important for gemologists to have an appropriate name for this type of Pyrope Garnet that has a unique appearance and chemical composition, just as gemologists rely on variety names to distinguish other Pyralspite Garnets such as Chrome Pyrope, Rhodolite and Malaya Garnet. We classify the material pictured below as a Pastel Pyrope that shows color change.