Purple: Purple and lavender color in Tourmaline is rare, and it is likely due to a combination of pink color from manganese (Mn3+) and blue color from iron (Fe2+). Pink plus blue = purple. Pale purple Tourmalines are sometimes referred to as "Siberite" (a term associated with Siberia where purple Tourmaline has been found). In contrast, purple and violet colors in copper-bearing Paraiba Tourmalines are due to pink from manganese (Mn3+) plus blue from copper (Cu2+).

The purple "Siberite" gem below (left) shows a Moderate magnetic response. The "Siberite" on the right is strongly magnetic and shows a near-drag response. The stronger magnetism appears to be due to a higher concentration of cryptic (colorless) manganese (Mn2+) in addition to the small amounts of Mn3+ and Fe2+ that create purple color in both gems.

Tourmalines: Pink, Red and Other Colors

Bi-Color: A single Tourmaline crystal can have 2 colors that exist separately rather than blended. Crystals can either grow with a central core of one color and outer rim of another color (as in the slice pictured below left), or with bands of different color along the crystal shaft (represented center and right). Any combination of colors is possible. The most frequently seen bi-color gem is “watermelon” Tourmaline, in which pink or red color meets green color. Bi-color Tourmalines can show different magnetic responses within the same gem, with pink/red sections tending to be the least magnetic, or diamagnetic.

The orangey red Tourmaline pictured below has an unusual color. Do we call it "Rubellite"? Unlike "Rubellite" Tourmalines with purer red color, this orangey red gem is strongly magnetic. Perhaps the reason for the strong magnetism is similar to that proposed for the pink gem above: the rough crystal may have begun as a yellowish gem with high Mn2+ content, and the gem retains a significant concentration of magnetic Mn2+ after irradiation and ion conversion to Mn3+. Orange color can develop when yellow (Mn2+) and pink (Mn3+) combine within the same gem.

The pink Tourmaline trillion shown below is one of the palest pink Tourmalines in this study, yet it shows the strongest magnetic response: it drags. How is this possible? In addition to pink, there is yellow color in this gem. Yellow color in Tourmalines is associated with manganese in the valence state of Mn2+, and as we shall see, it can also be colorless or cryptic. Perhaps this pink Tourmaline began with an unusually high concentration of Mn2+. After natural radiation exposure, it may have retained more Mn2+ (yellow) than most other pink Tourmalines. We can speculate that the pink color remains very pale because radiation exposure time was short and the alteration to Mn3+ (pink ) was minimal.

Pink Tourmaline appears then to be associated with a higher total concentration of manganese than less magnetic red Tourmaline. Research is needed to determine why this might be the case, but it is likely related to the proportion of cryptic manganese (Mn2+) to pink/red manganese (Mn3+).

A study titled "The Role of Natural Radiation in Tourmaline Coloration" (Reinitz & Rossman,1988) suggests that when pink and red Tourmaline crystals first form geologically, they probably contain low concentrations of Mn2+ with little or no Mn3+, and are probably colorless or pale in color. Natural  gamma radiation from radioactive decay changes the Mn2+ to Mn3+ over  geologic time and changes the body color from colorless or pale color to pink color, and eventually to red color due to Mn3+. But Mn3+ oxide in Tourmaline actually has a slightly higher magnetic susceptibility than Mn2+ oxide.

However, one pinkish brown Tourmaline in our study showed a Drag response (see photo below). Spectrometer analysis suggests that the high magnetic susceptibility of this gem may be due to an abundance of cryptic Fe3+ iron in addition to the Fe2+-Ti4+ charge transfer that produces brown color. However with a spectrometer, it is difficult to decipher whether it is cryptic iron (Fe3+) or cryptic manganese (Mn2+) that is responsible for the high magnetic susceptibility.

Pinkish Brown: Most pinkish brown Tourmalines such as the 2 gems pictured below do not show strong magnetism. It is likely that the color of these gems is due to iron-titanium charge transfer (brown color) in addition to low concentrations of manganese (Mn3+, pink color). The cushion on the left shows an Inert (Diamagnetic) response, and the square on the right shows a Weak response.

Colorless and Near-colorless: Colorless Tourmalines such as the pear shown below (left) have the trade name "Achroite". Like most colorless allochromatic gems of any kind, it is diamagnetic because it lacks sufficient metallic chromophores to be attracted to a magnet. The near colorless yellow and pink gems shown below (right) are also diamagnetic. The manganese ions (Mn2+ and Mn3+) responsible for the faint colors are in concentrations too low to be detectable with a magnet.

Pure yellow Tourmalines such as the 2 gems above are rare. Brownish yellow gems such as the 3 shown in the photo below are more common. Iron (Fe2+-Ti4+ charge transfer) is likely responsible for the brown component. The magnetic responses of these gems range from Inert to Drag.

The greenish yellow gem from Brazil pictured below (left) and the yellow pear from Tanzania pictured below  (right) have high manganese content and the highest magnetic susceptibilities of all yellow Tourmaline tested (SI 512 and SI 477). These are some of the highest magnetic susceptibilities for transparent Tourmalines of any color. Elbaite is known to mix in solid solution with Tsilaisite, a greenish yellow idiochromatic species with very high manganese (Mn2+) content. The Brazilian oval is likely an Elbaite whose composition is approaching Tsilaisite along the Elbaite-Tsilaisite solid solution continuum. The same may be true of other yellow Tourmalines that have very strong magnetism, such as the Tourmaline pear from Tanzania.

A study designed to compare measured magnetic susceptibility to known levels of manganese within Tsilaiste gems might show that Tsilaisite gems can be identified by susceptibility measurements alone. Determining the relative compositions of pure yellow Tourmalines that are intermediate between Tsialaisite and Elbaite end-members might also be possible using magnetic measurements if the theoretical susceptibility value of the pure Tsilaisite end member could be calculated.

Another interesting study might be to determine the changes in magnetic susceptibility of yellow gems induced by treatments. It has been shown that when yellow Tourmalines are treated with high temperature or irradiation, the Mn2+ changes to Mn3+ and the gems become red in color (Laurs, B. et. al, 2007).  We might speculate that when strongly magnetic yellow gems are altered to red through these treatment processes, the magnetic susceptibilities of these gems will be slightly increased as a result of the change in the valence state of the manganese ions. However, it's possible that a lowering of magnetic susceptibility due to high heat might offset any increase due to a change in valence.

Gray: Gray color is sometimes seen in transparent Tourmalines. The Tourmaline cushion pictured below left shows a combination of blue and gray colors. It is highly magnetic and shows a Drag response due to high iron content. The blue color in this gem is likely due to the presence of iron (Fe2+). Is irradiation involved in the gray color, or does the blue-gray color and strong magnetism simply indicate an intermediary between blue Elbaite and black Schorl? The high measured magnetic susceptibility of this gem is intermediate between transparent blue Tourmaline and opaque black Tourmaline (Schorl).

The rectangular gem pictured below right is lavender-gray. Like the blue-gray gem on the left, it shows a Drag response and has a measured magnetic susceptibility that is at the high end for Elbaite Tourmaline. Iron accounts for the strong magnetism, and perhaps a small amount of Mn3+ (pink) is associated with the lavender color.

As a side note, if we have a yellow gem of any kind that we are trying to identify, a Drag response to a magnetic wand narrows the possibilities to just 2 gem species: yellow Tourmaline or yellow Mali Garnet. These are the only 2 primary or common gemstones that will exhibit a Drag response.

As illustrated by the 2 gems shown below, there is no correlation between color intensity and magnetic susceptibility in yellow Tourmalines. The gem on the left from Mozambique shows a very Weak magnetic response. It is at least 15 times less magnetic than the gem on the right from Zambia, which has similar color and shows a Drag response. Spectrometer analysis indicates that the gem on the right is more magnetic because it has greater manganese (Mn2+) content.

Yellow: Yellow is an uncommon body color for Tourmaline gems. Sometimes referred to in the trade as Canary Tourmalines, yellow Tourmalines are mined in Zambia, Malawi, Mozambique, Nigeria, Madagascar and Brazil. Most belong to the Elbaite species, but the oval shown below right is identified by Raman spectroscopy as Liddicoatite. The yellow color of these gems is due to manganese-titanium (Mn2+-Ti4+) charge transfer as well as to ions of manganese in the bivalent state (Mn2+). As we have already seen, this valence state of manganese in high concentrations can result in high magnetic susceptibility. In our study, yellow Tourmalines had the widest range of magnetic response and susceptibility of any transparent color variety, ranging from Inert (< 0 SI) to Drag response (SI 512).

As we have already shown, iron ions (Fe3+) and manganese ions (Mn2+) can be present in some colorless and near-colorless Tourmalines in levels that are sufficient to induce magnetic attraction without contributing color. Refer to the example of the bi-color (Indicolite blue and colorless) bar presented on the previous page in which the colorless portion shows moderate to strong magnetic susceptibility.

Pictured below is a near-colorless Tourmaline from Madagascar with only a hint of blue and yellow colors due to iron and manganese ions. Surprisingly, this gem is strongly magnetic. Examples such as these are further evidence that cryptic or "invisible” iron and/or manganese ions may at times account for large differences in magnetic susceptibility between two Tourmalines of similar color.

Cryptic Manganese: Manganese (Mn2+) is a weak chromophore, and increasing concentrations of Mn2+ may not necessarily correspond to brighter yellow color. The Mn2+ ions can be cryptic or hidden from view when in lower concentrations: i.e. these Mn2+ ions may not by themselves be visibly detected as color. The intensity of yellow color may be primarily controlled by Mn2+-Ti4+ charge transfer. Cryptic ions of manganese (Mn2+) also do not absorb enough light to be visible as absorption bands under a spectroscope, but these cryptic ions can be revealed with a spectrometer and with a magnetic wand.

Rossmanite is a rarely-seen lithium Tourmaline species with a chemical composition that is only slightly different than that of Elbaite (sodium Tourmaline). Like Elbaite, it derives it’s color and magnetism from idiochromatic Tourmalines that are mixed within it. Transparent crystals are generally pale pink due to manganese (Mn3+). Shown below is an example of an opaque pinkish purple Rossmanite cab from Manitoba, Canada. Purple color in this Rossmanite specimen may be related to inter-grown crystals of purple Lepidolite, another lithium mineral.

Causes This Gem to Drag 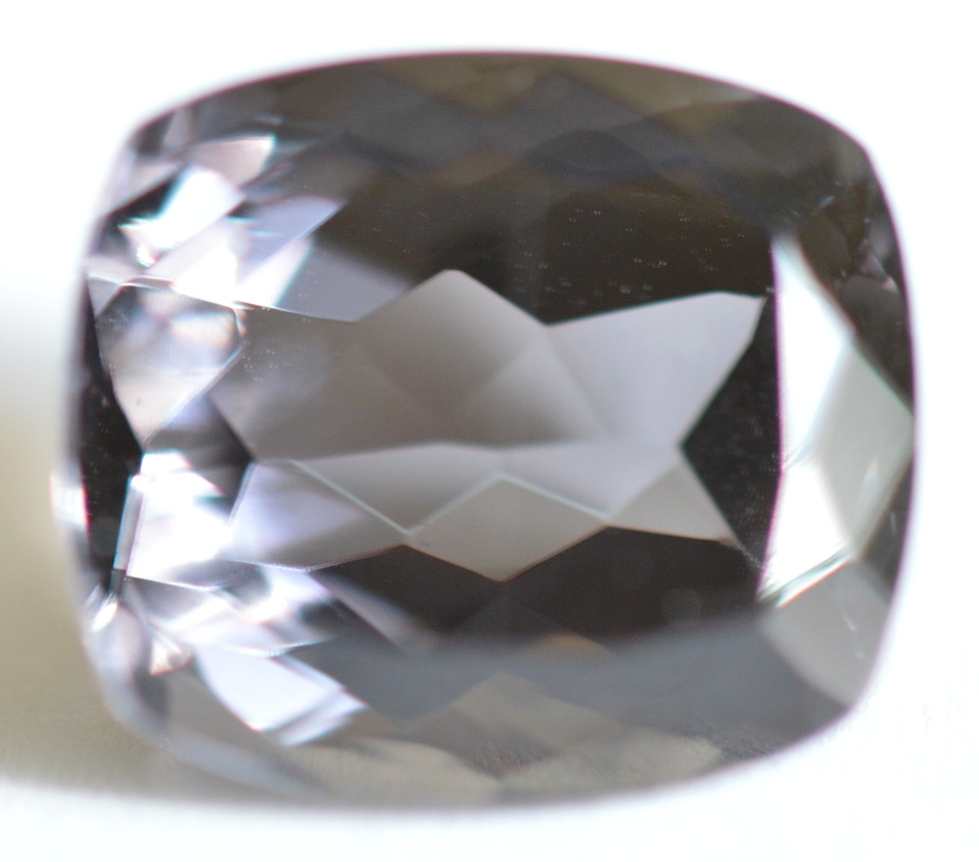 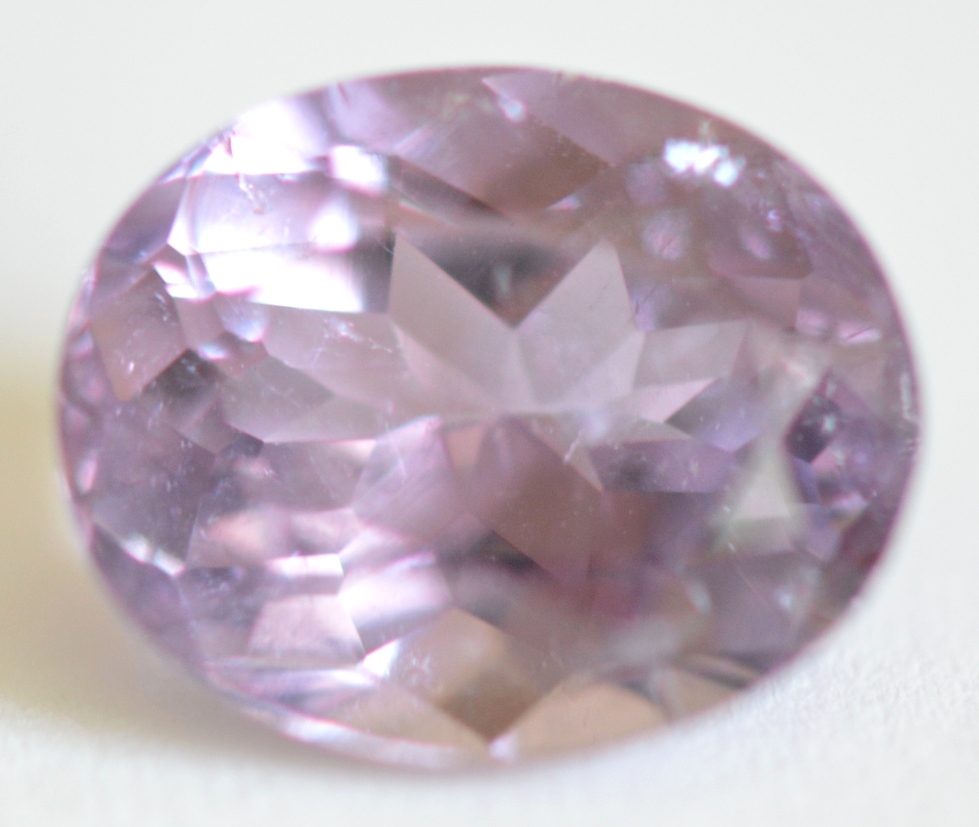 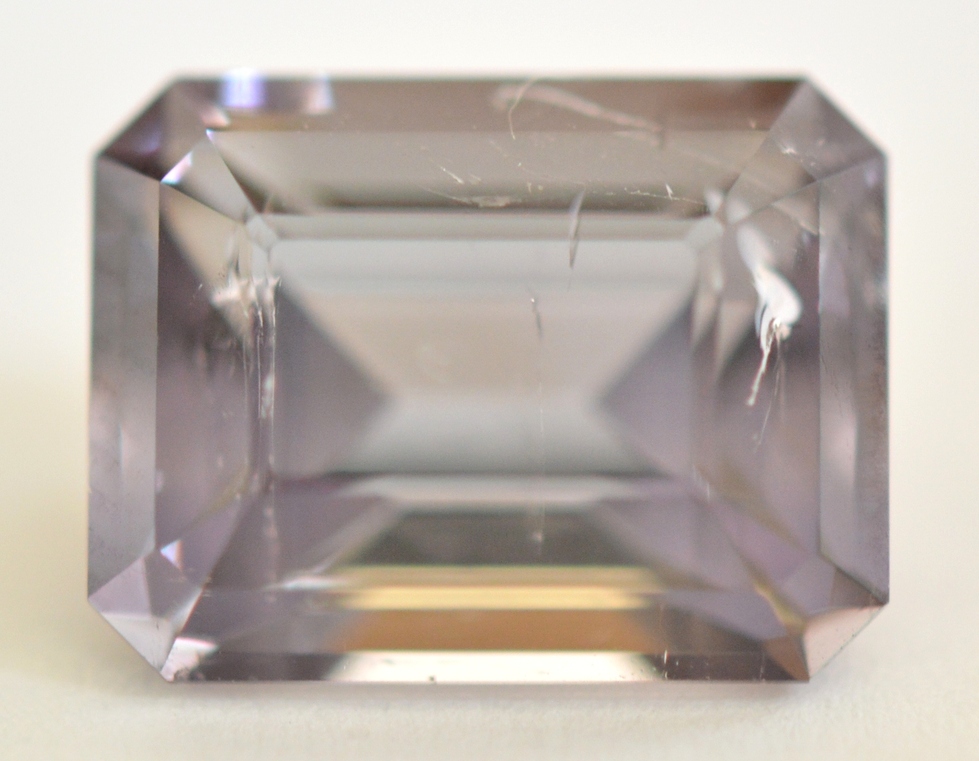 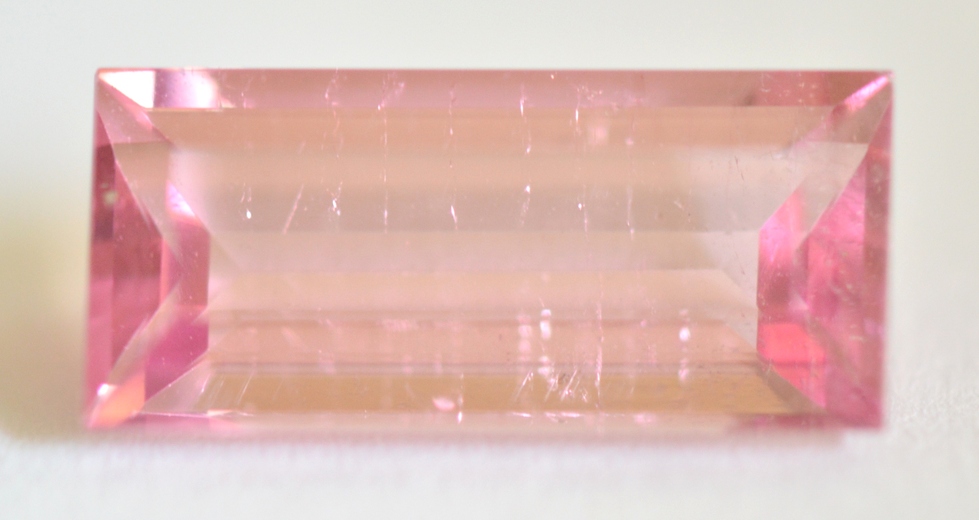 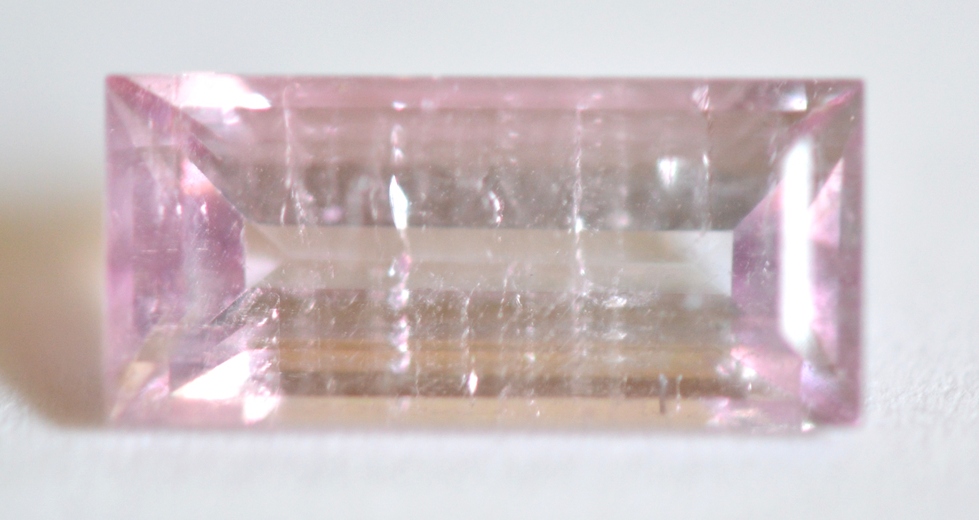 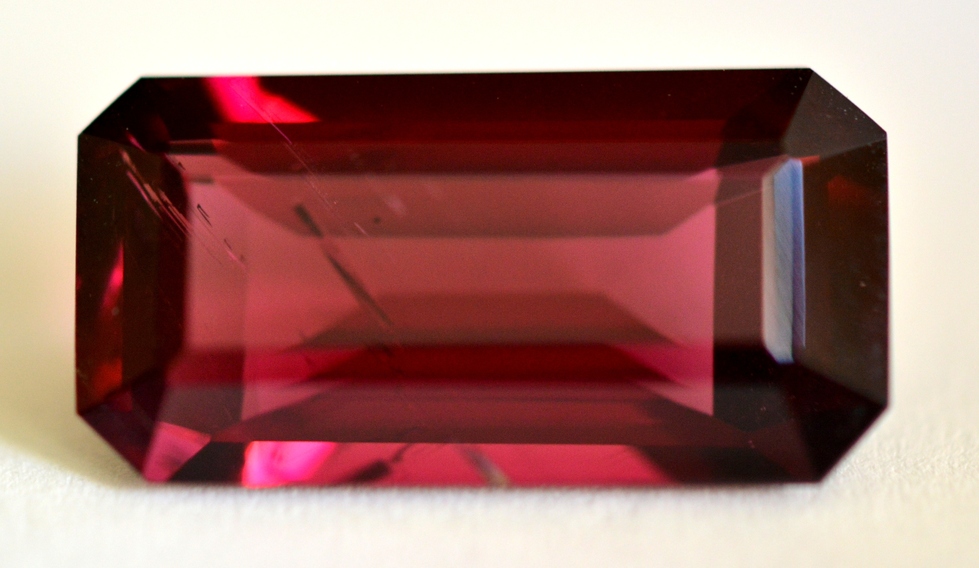 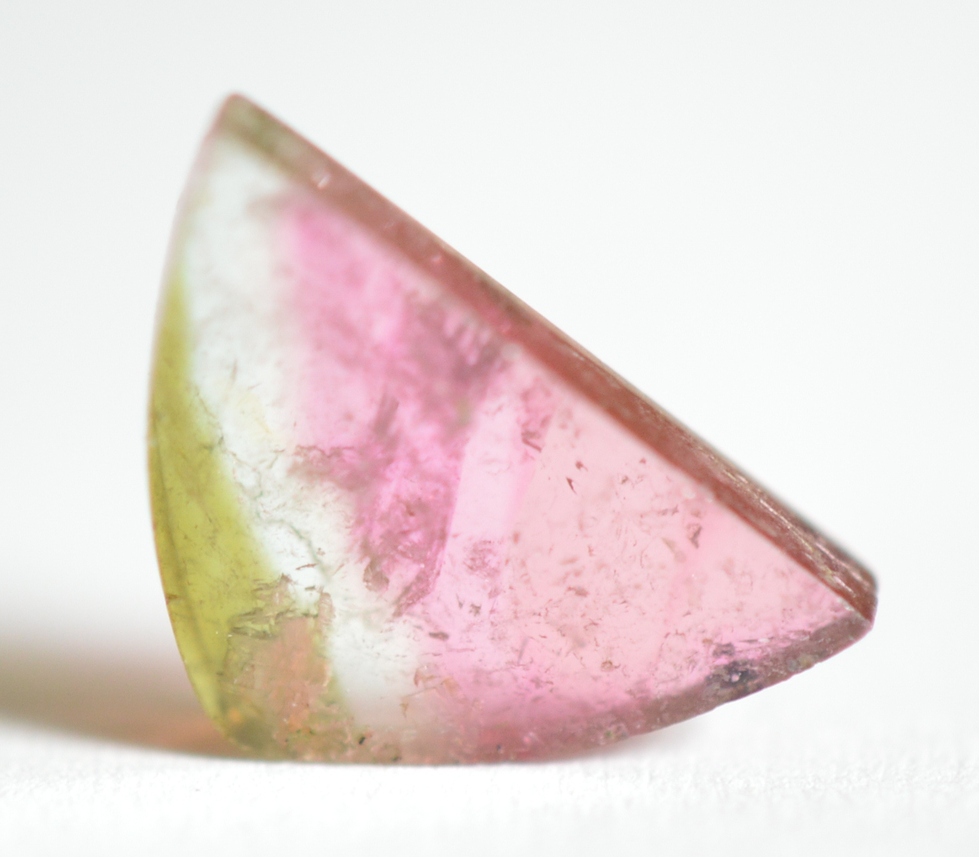 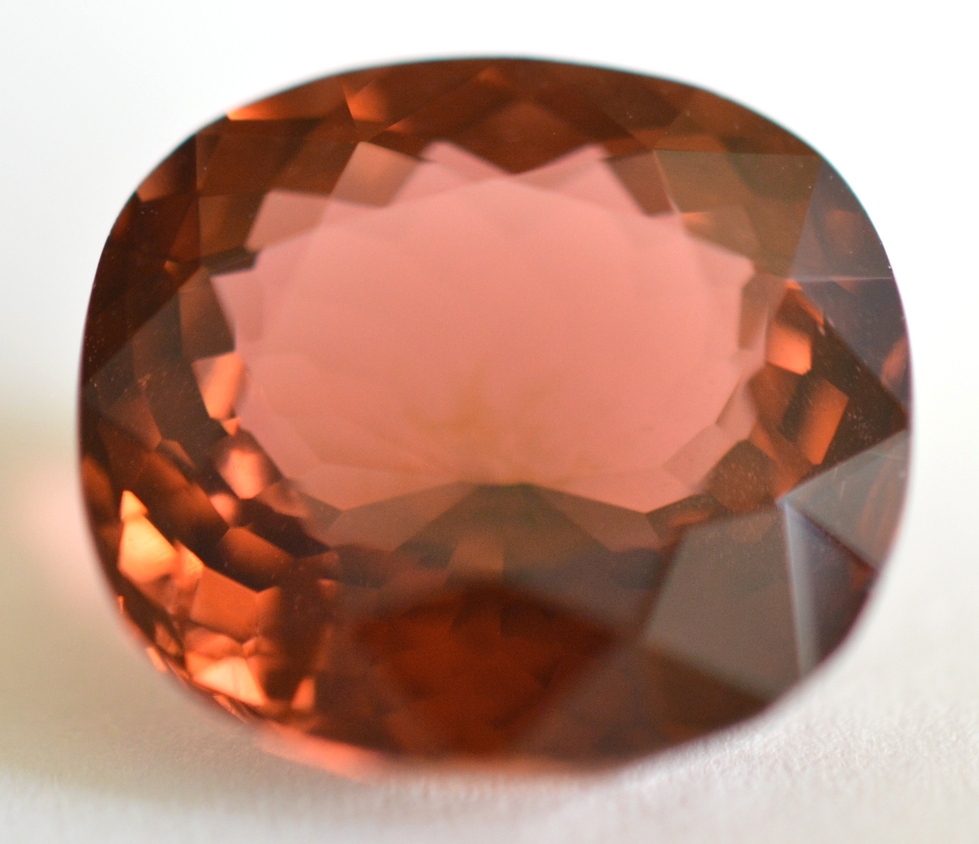 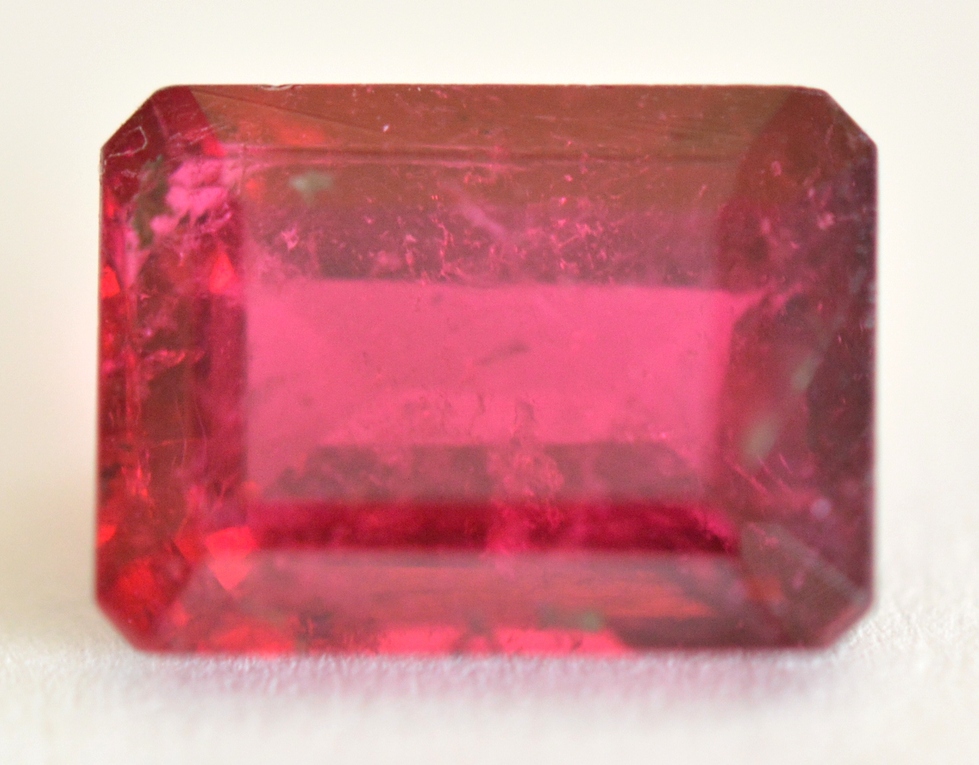 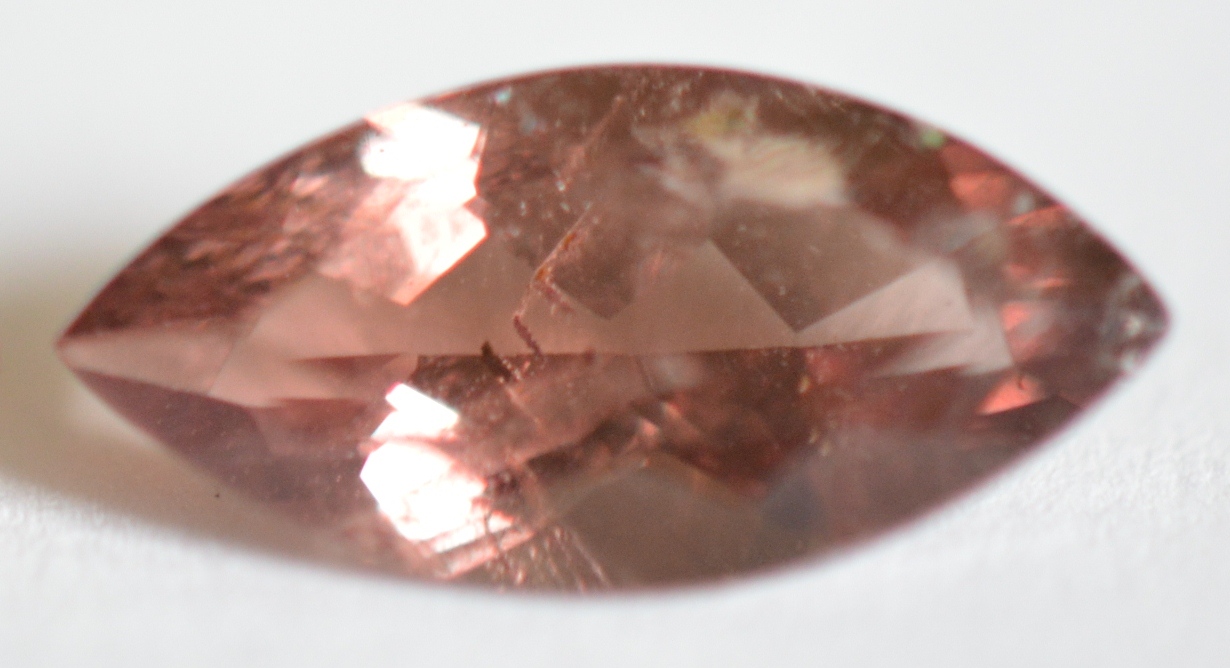 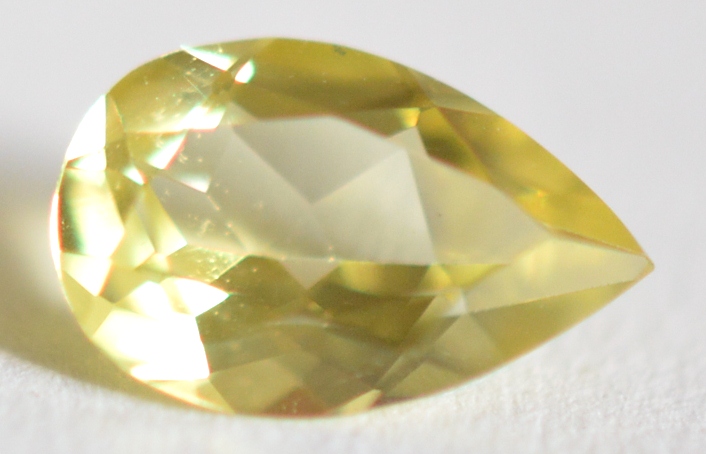 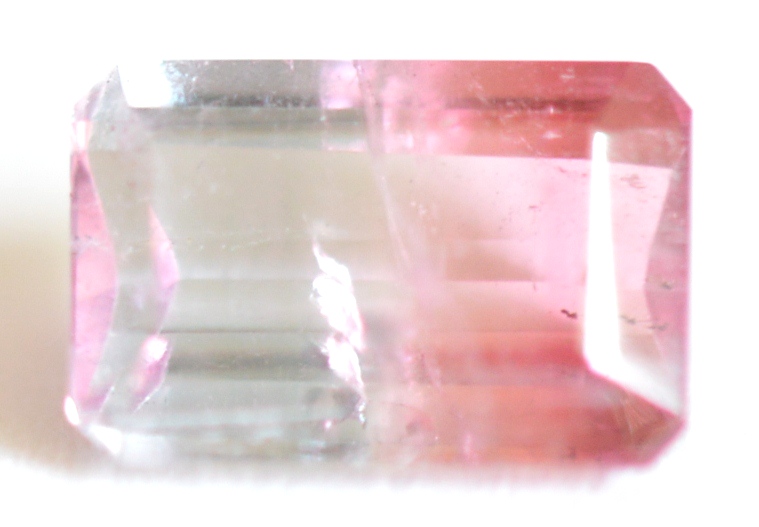 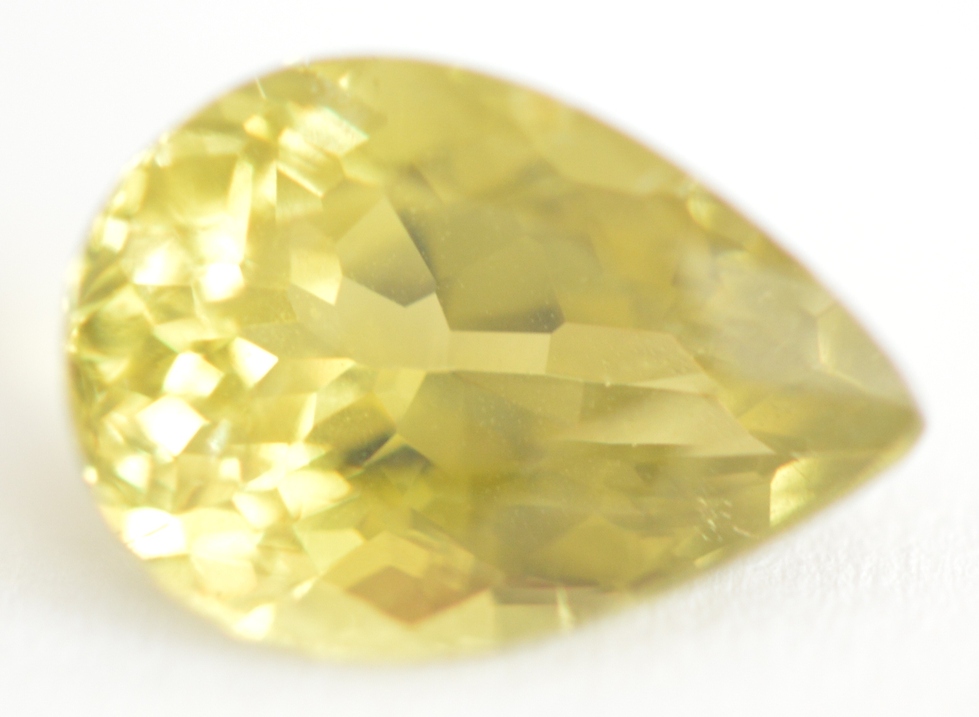 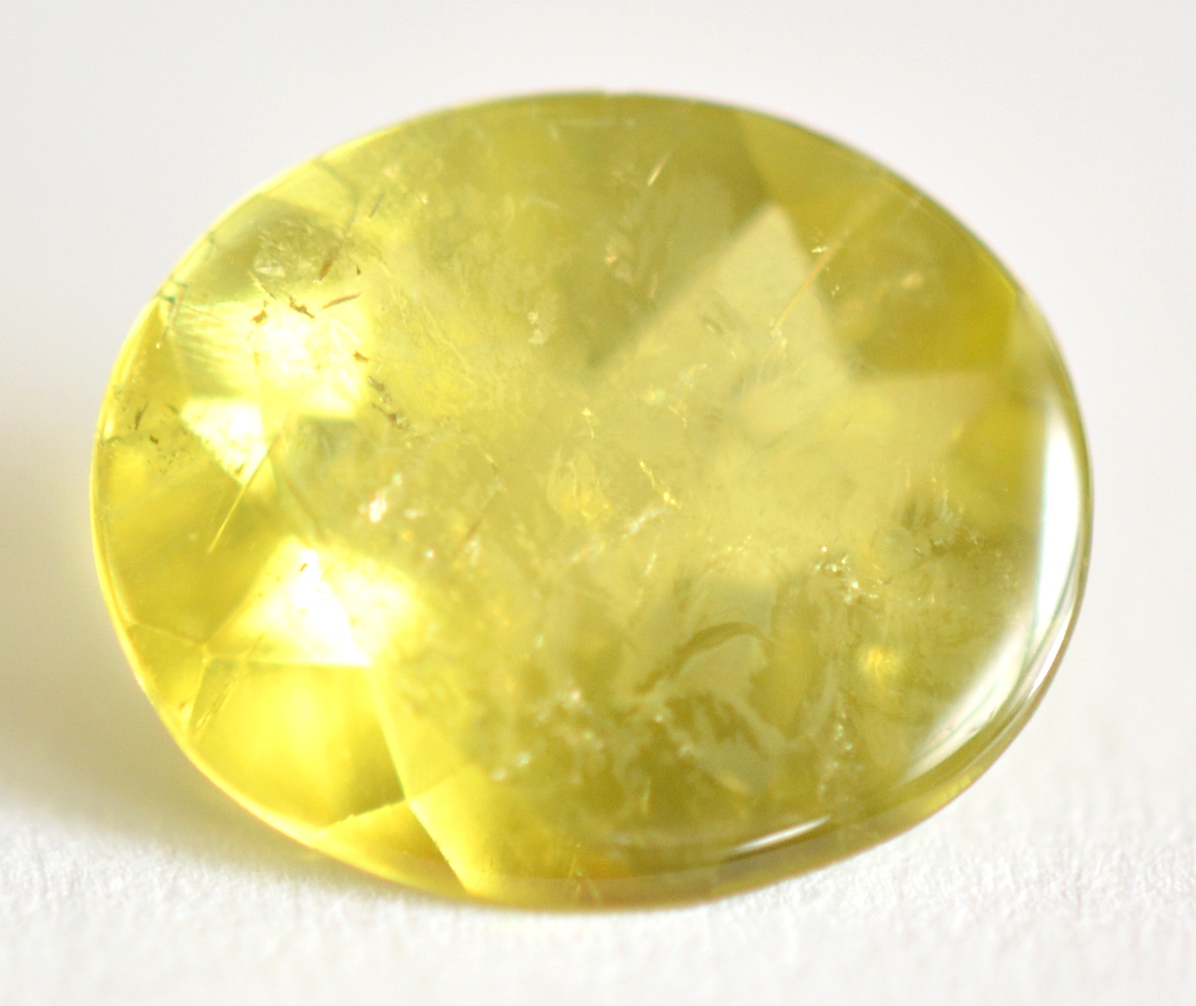 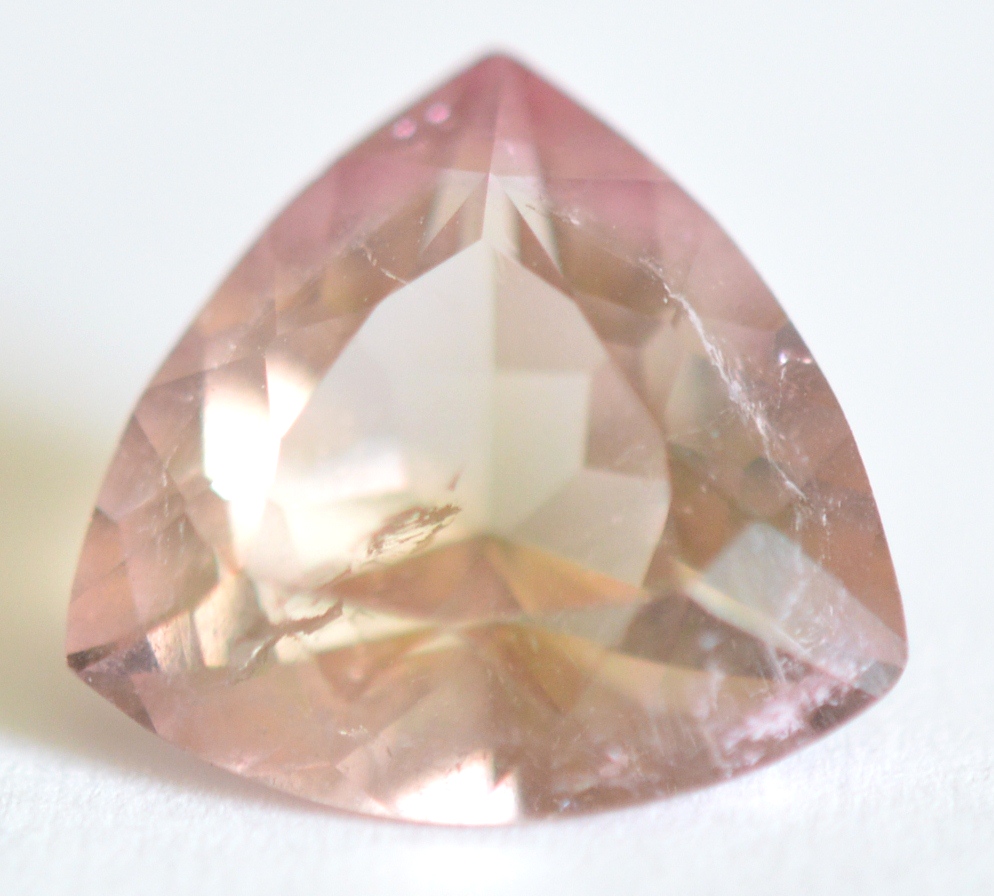 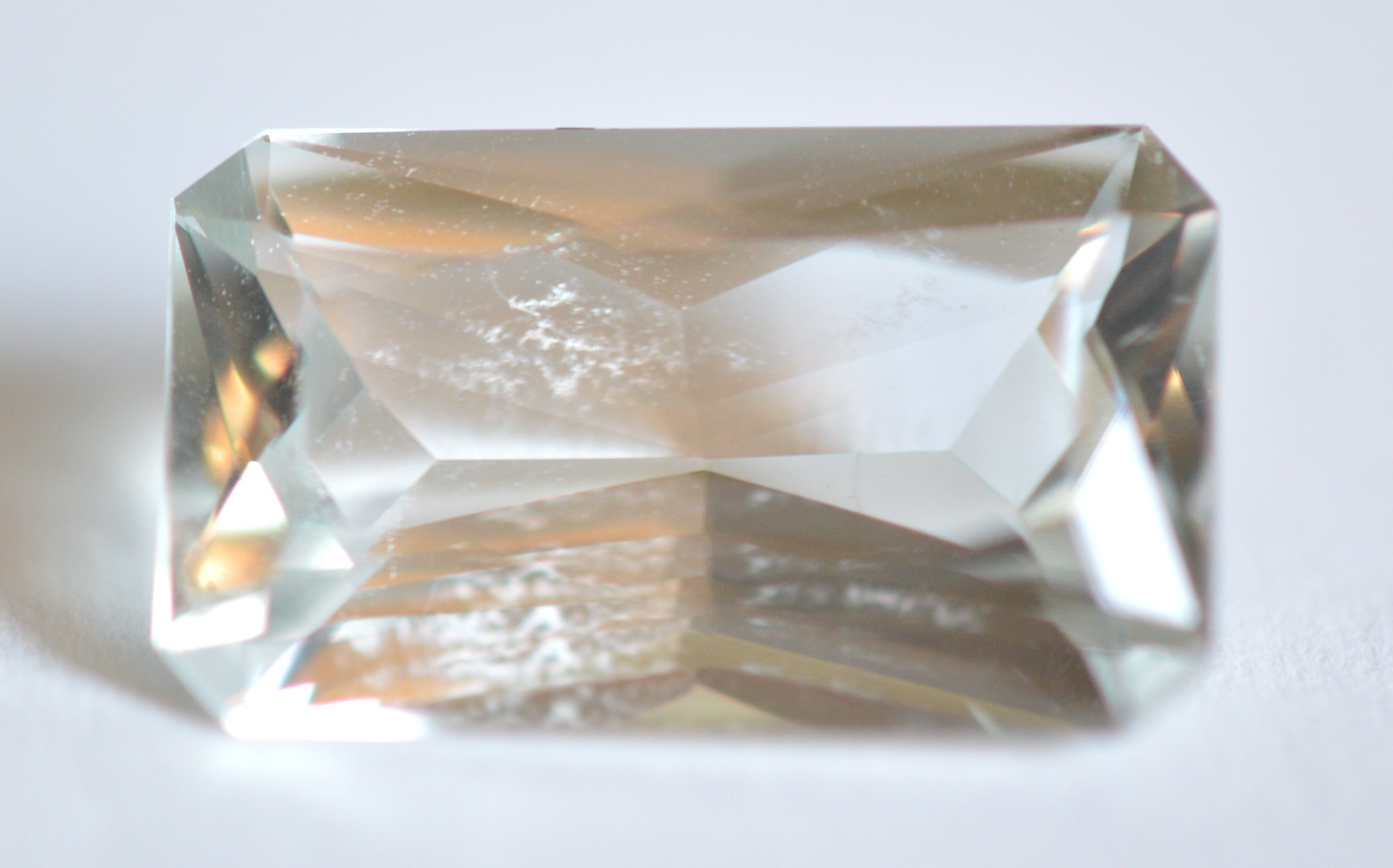 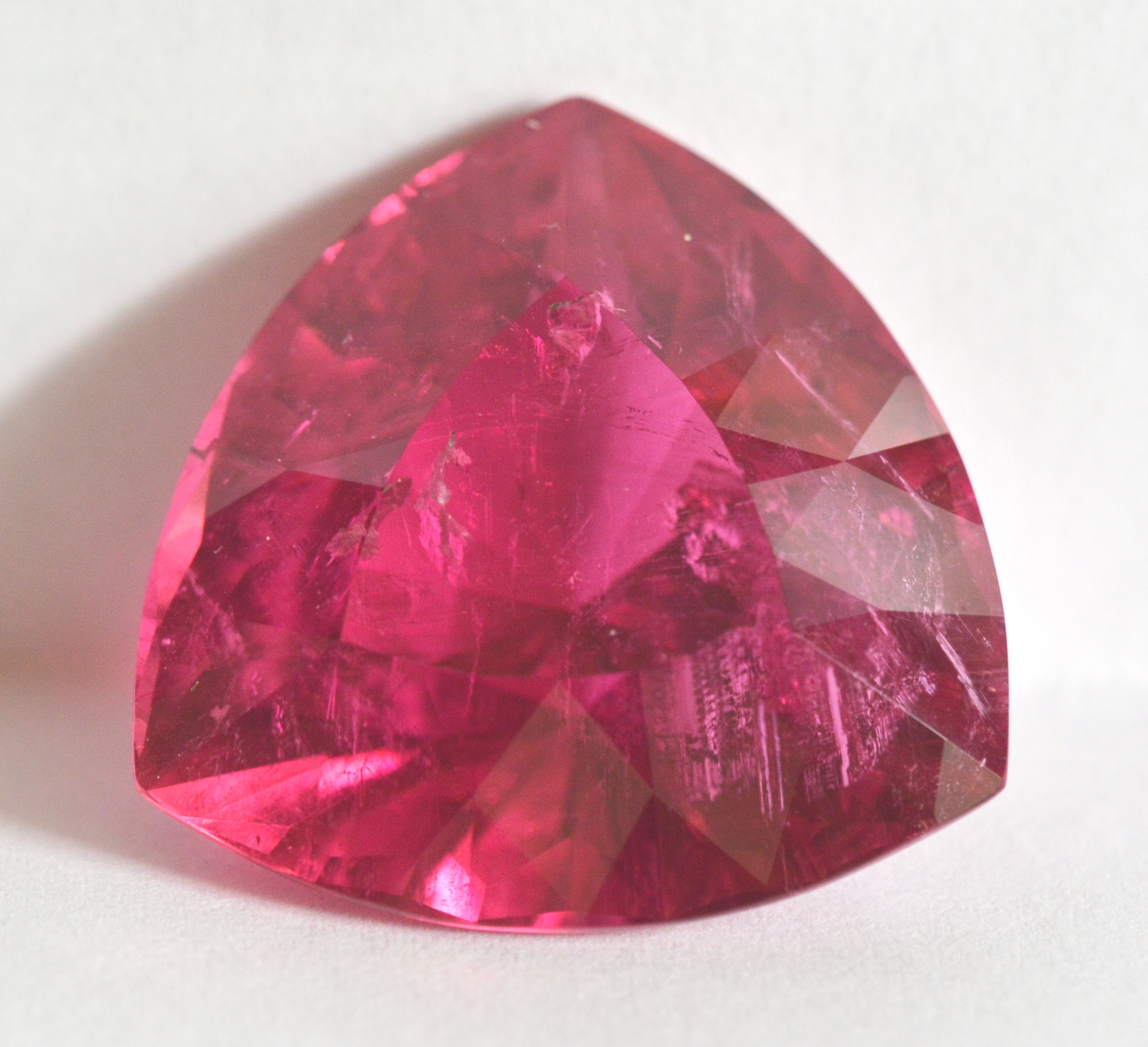 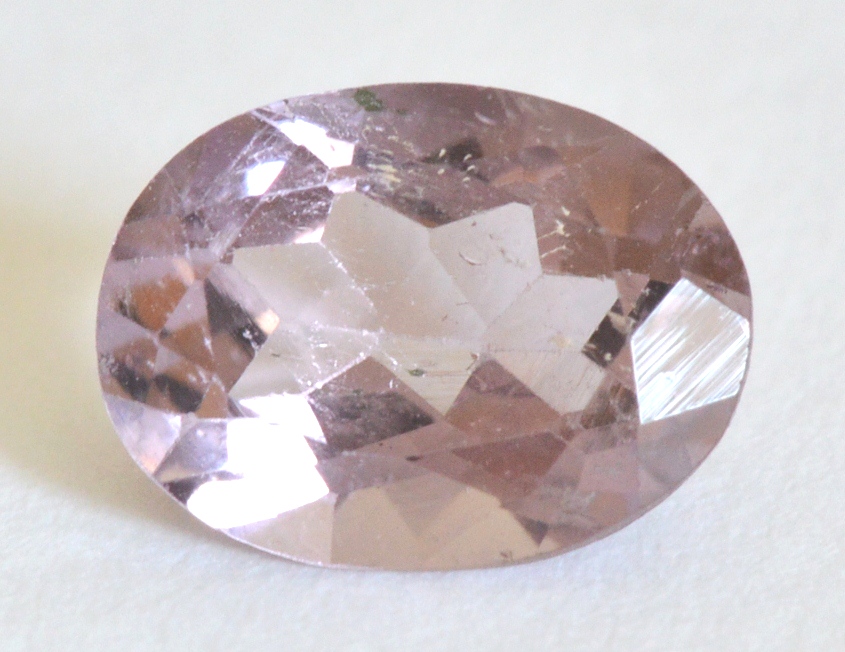 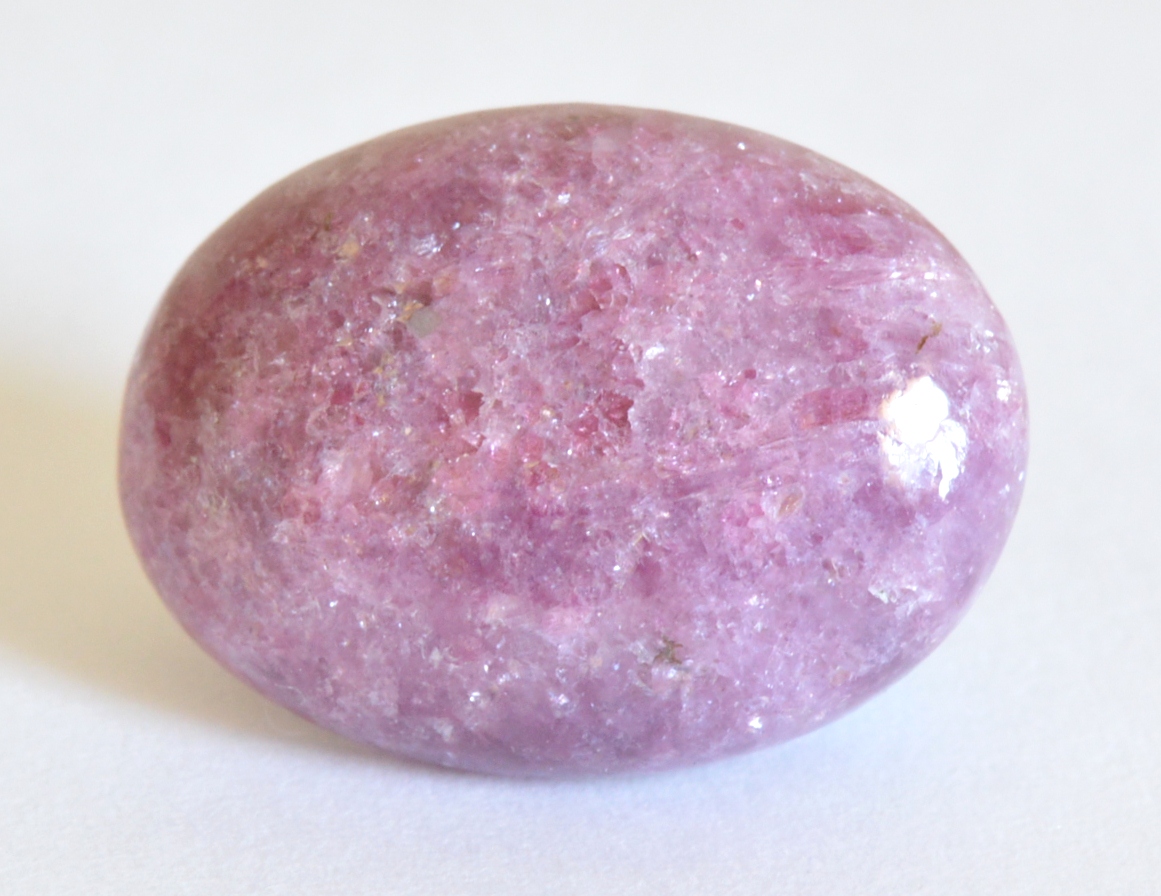 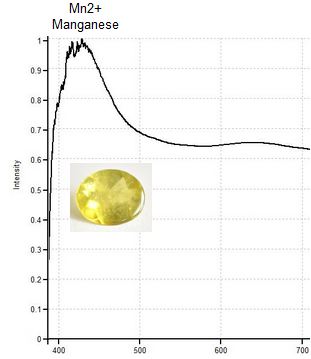 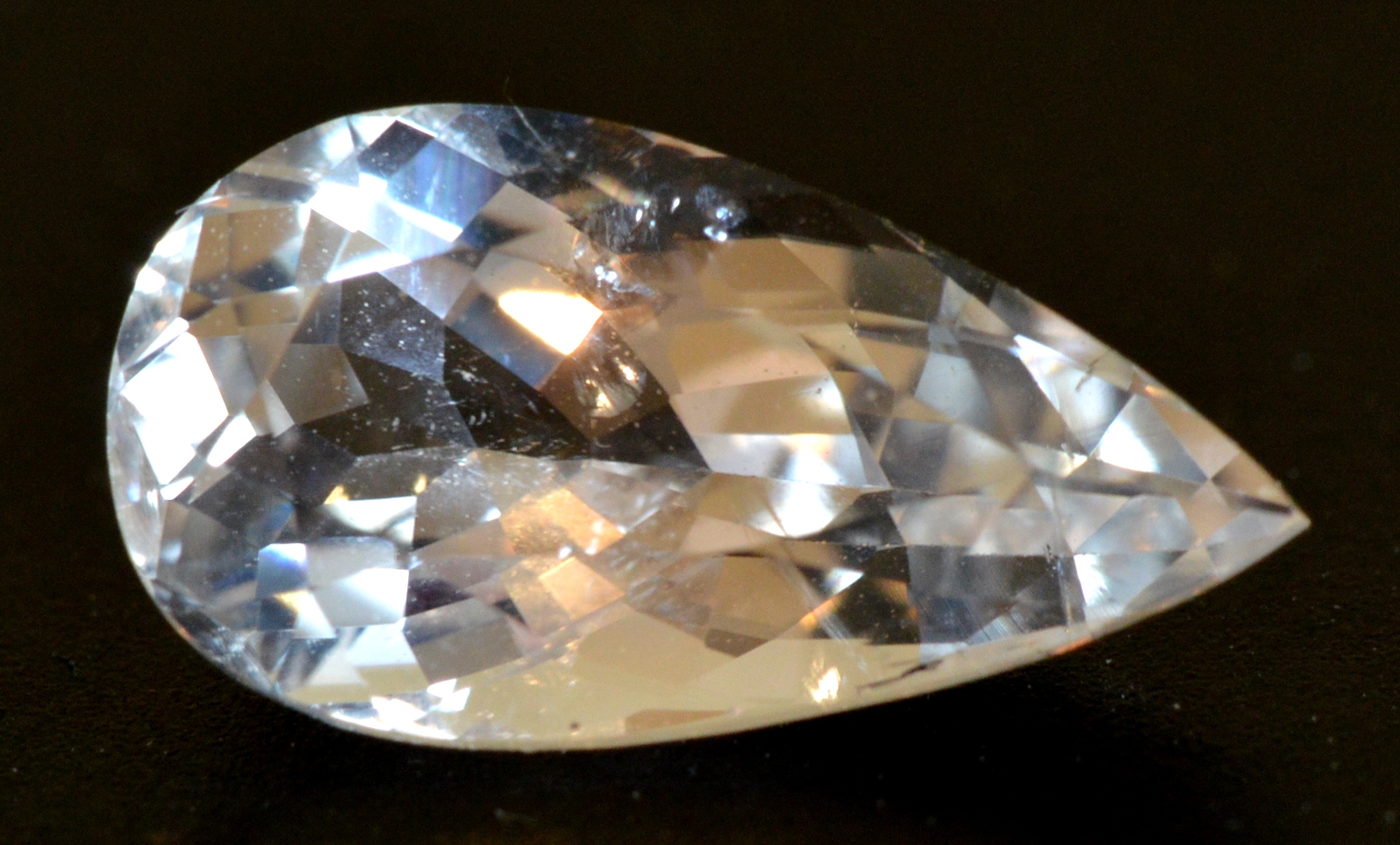 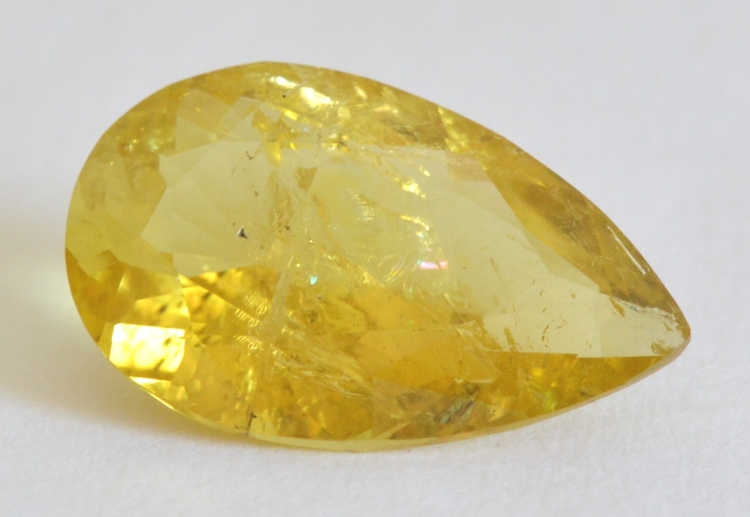 We encountered one highly anomalous red "Rubellite" with very high magnetic susceptibility. A 4.56ct gem from Madagascar shows a Drag response, and has a magnetic susceptibility measurement (SI 382) that is more than 5 times higher than the next most magnetic "Rubellite" in our study. Spectrometer analysis indicates a significant amount of cryptic manganese (Mn2+) may be responsible for the high magnetism.