The term 'Malaya' refers to the unusual appearance of these garnets, and has nothing to do with the country of Malaysia. Most of these Garnets are mined in Tanzania and Madagascar. This researcher considers Malaya (a.k.a Malaia) to be primarily a variety of Pyrope that has unusual color: red, pinkish red, pink, brown, brownish pink, orange, brownish orange, orangey red and even near-colorless. Malayas are often lighter in tone than Standard Pyrope gems, and these lighter Malayas often exhibit color-shift and color change when viewed under incandescent light.

Malaya Garnets can also be light pink in color. Some pink Malayas may also have a slight amount of purple color (as in the pear pictured below), and show weak color shift by flashing to red in incandescent light. Light pink gems also show color change from pink in daylight to yellow in fluorescent light due to manganese. These are Pyrope-Spessartines, and the pink daylight color is due primarily to chromium rather than iron.

The Tanzanian Garnet trademarked in 2011 by Jewelry Television as Masasi Bordeaux Garnet™ (photo below left) would be classified by this researcher as a light-colored brownish orangey pink Malaya (trade name "Imperial" Malaya). These Garnets are colored by manganese and chromium/vanadium. Magnetic testing (RIMS analysis) of a sample purchased from JTV (below left) reveals a composition of Pyrope and Spessartine in roughly equal proportions: 50% Pyrope, 49% Spessartine, and 1% Almandine. Some Grossular is also likely present.

Three Orange Malayas with Spessartine as the Primary Component

Malayas are generally classified by GIA as belonging to the Pyrope-Spessartine species, but our study shows that the majority contain significant amounts of all 3 end-members (Pyrope, Almandine and Spessartine), while fewer are either Pyrope-Almandines or Pyrope-Spessartines. Other researchers who have performed chemical analyses on Malaya Garnets using an electron microprobe report that a small amount of Grossular (under 5%) is also commonly present.

﻿Near-colorless Malayas are very rare. We have encountered only one example (pictured below), and such Malayas have not been described anywhere else in gemological literature. This near-colorless gem has a slight orange tint due to manganese. The small size and depth of the gem also contributes to a lighter appearance. This Malaya Pyrope contains the least amount of Spessartine of any orange Malaya we tested (62% Pyrope, 36% Spessartine, 2% Almandine). It has the same major composition as pale pink Malaya, but the concentration of chromium is too low to induce pink as the predominant color. However, there is sufficient chromium to induce pink fluorescence under longwave UV light.

Malayas with orange body color (due to Spessartine content) are far less common in the marketplace than reddish stones. Orange Malayas can be orangey red, pure orange, brownish orange, pale orange, and near-colorless with just a hint of orange. Some orangey red Malayas will shift color to brownish orange when viewed under fluorescent light. As already mentioned, most orange Malayas are primarily Pyrope, but a few have been found to be primarily Spessartine.

The 3 strongly colored orange gems pictured below are all from Tanzania. These contain a higher percentage of Spessartine relative to most other Malayas, but each still has Pyrope as the primary component. The dark reddish orange Malaya on the left contains nearly as much Spessartine as it does Pyrope (42% Pyrope, 39% Spessartine, 19% Almandine).

Two other Masasi gems from JTV tested were also confirmed to be Pyrope-Spessartines containing 1) 58% Pyrope, 41% Spessartine and 2) 62% Pyrope, 35% Spessartine respectively. Each also contained a small percentage of Almandine.

These compositions are similar to that of light "Imperial" Malayas and light pink Malayas. These Masasi Bordeaux Garnet™ gems are not unique to Tanzania and JTV. We found Malayas of similar color and composition originating not only in Africa, but also in Sri Lanka and Madagascar.

Generally, the graph points for Imperial Malayas are centrally located on the Pyralspite ternary, indicating a mixture of Pyrope, Almandine and Spessartine, with Pyrope as the primary component. The composition of "Imperial" Malayas can be loosely differentiated from 1) red Malayas, which tend to fall near the Pyrope-Almandine join (high Almandine), from 2) pale pink Malayas, which tend to fall near the Pyrope-Spessartine join (high Spessartine), and from 3) Malaya Spessartines, which fall to the right of the typical Malaya range due to higher Spessartine content.

The Colors of Malaya 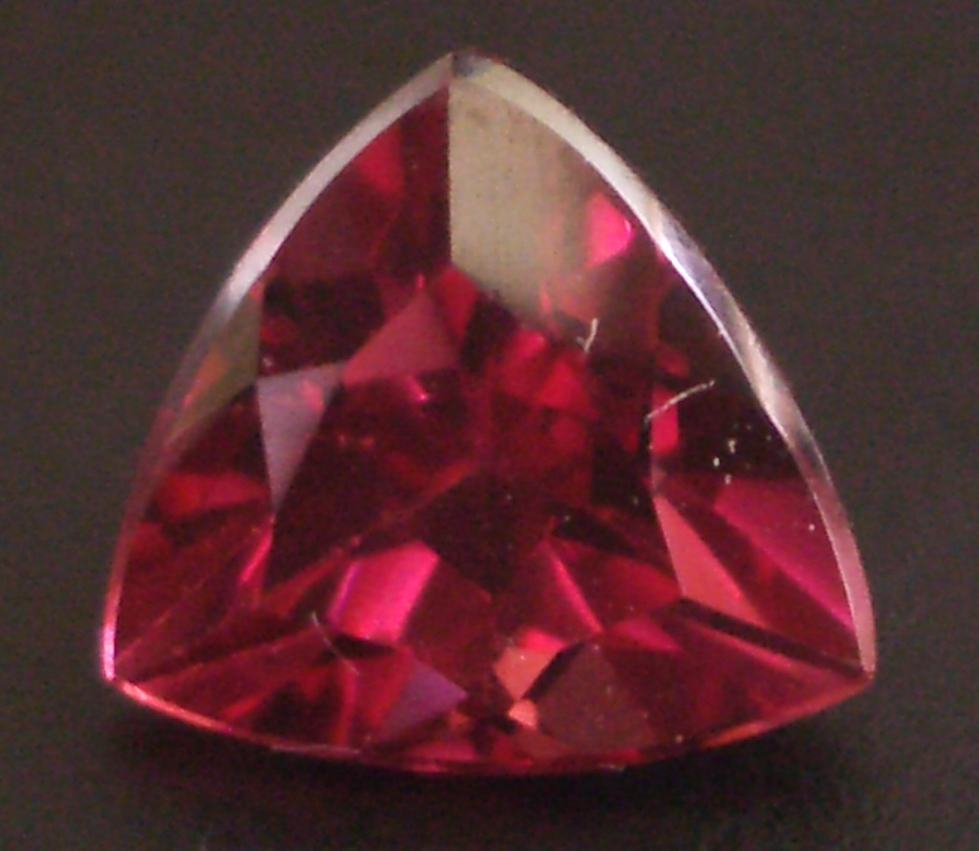 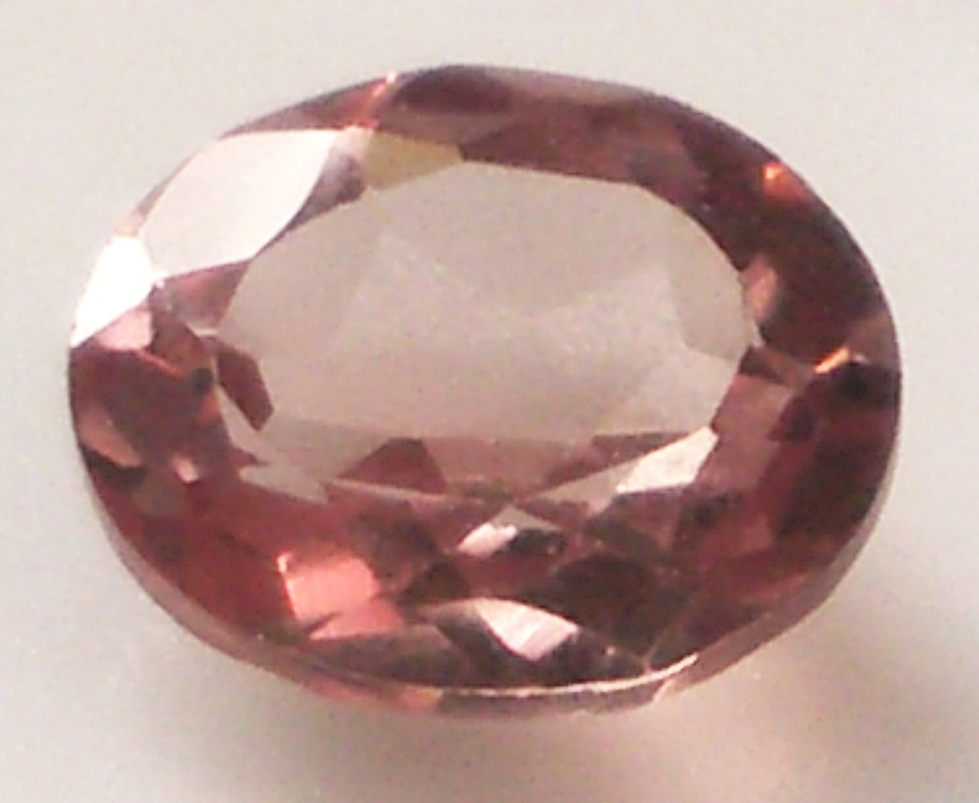 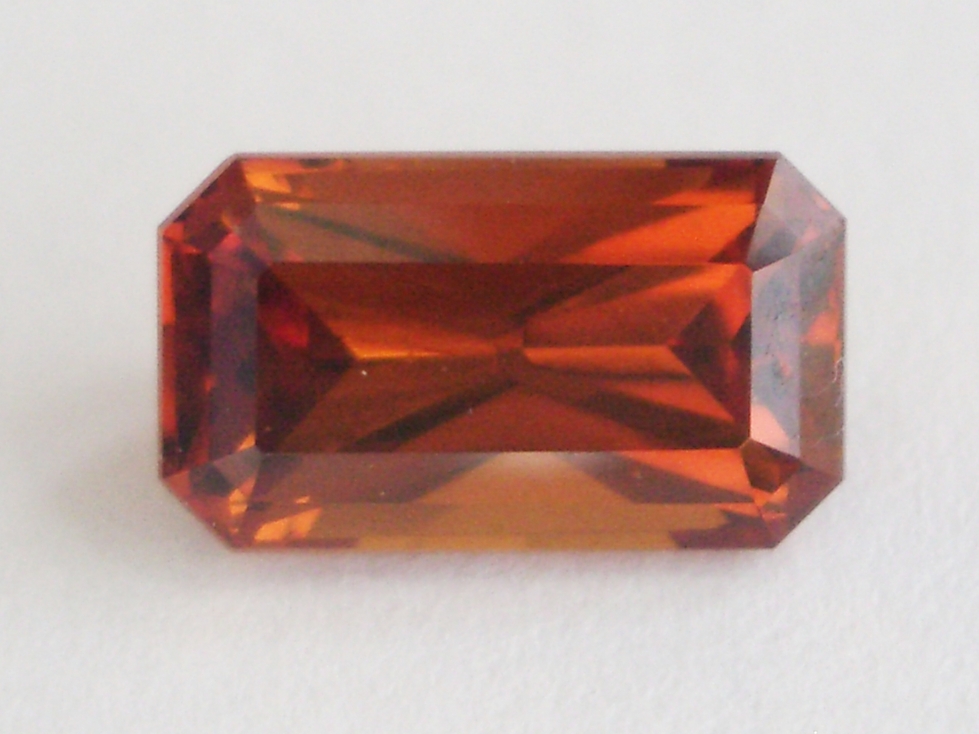 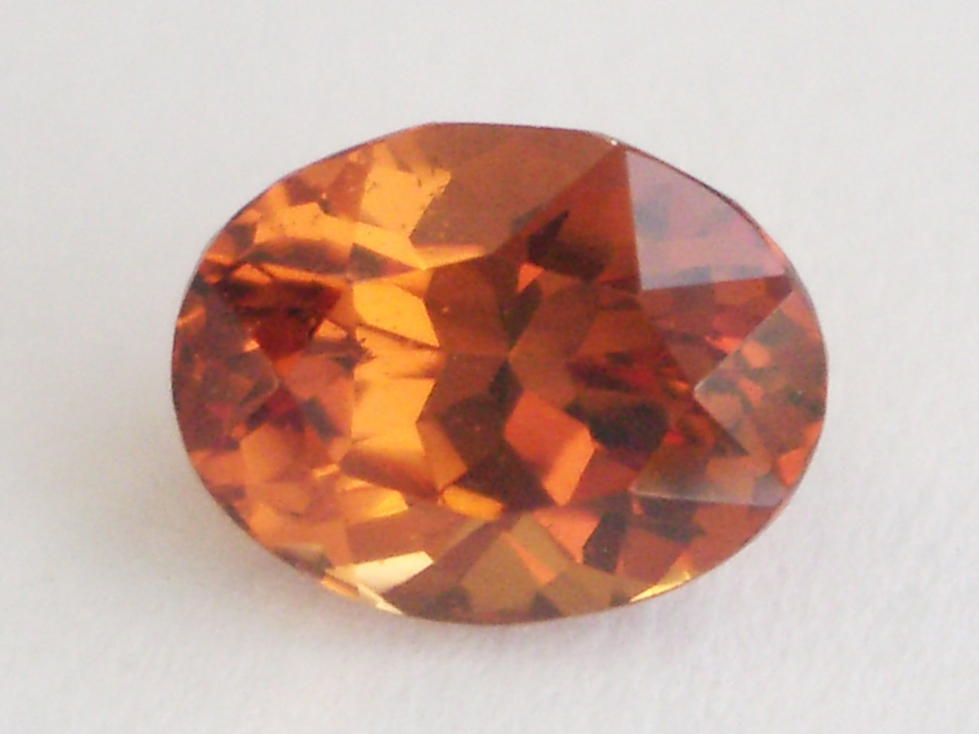 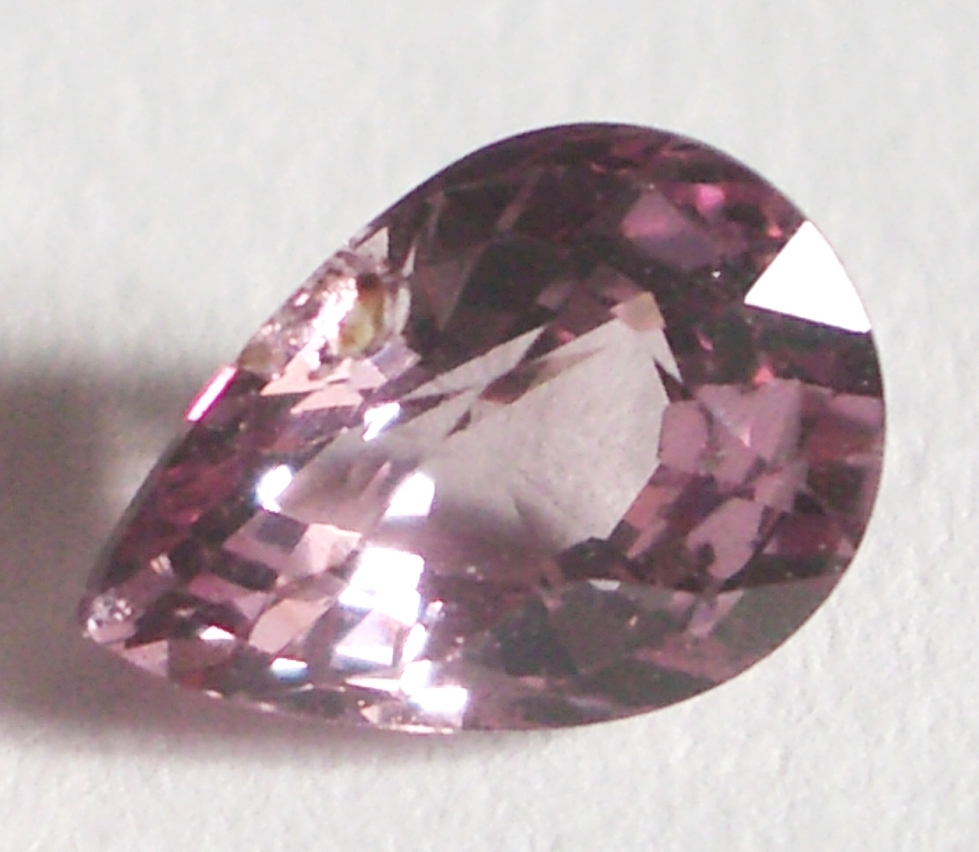 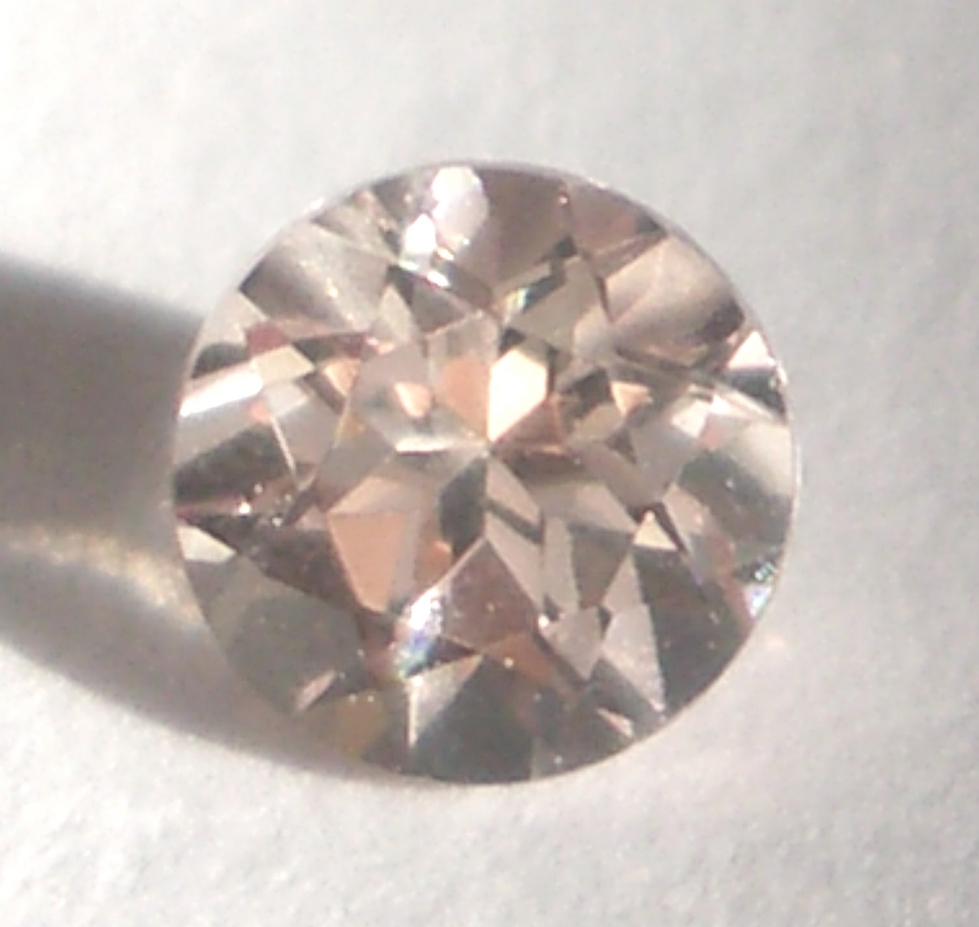 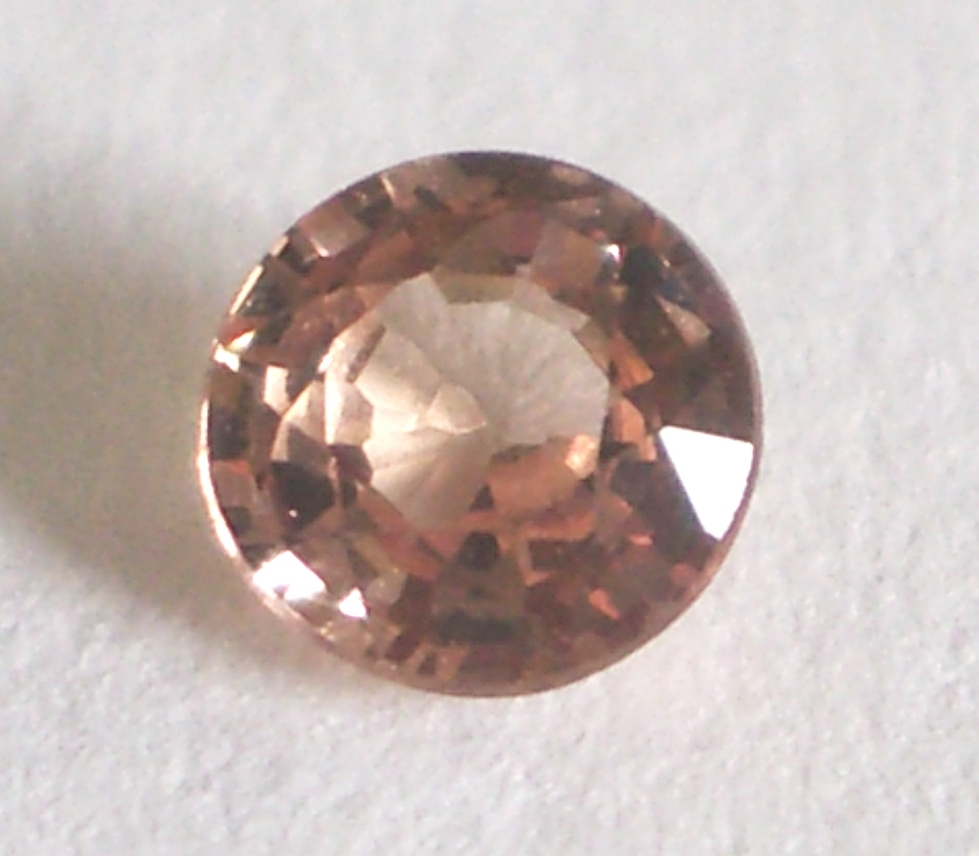 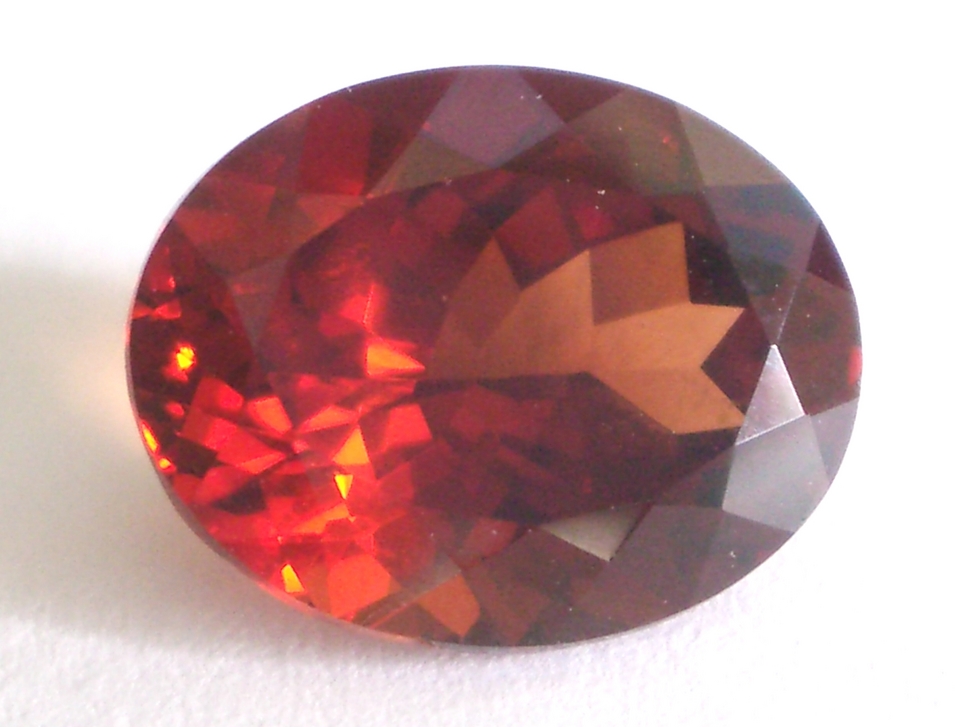 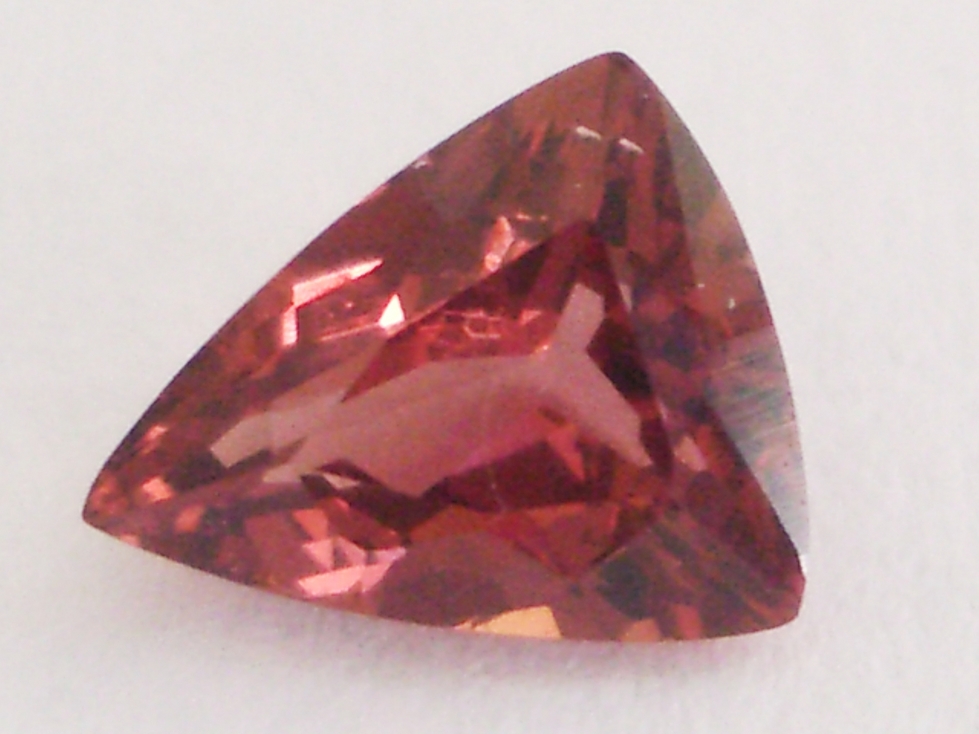 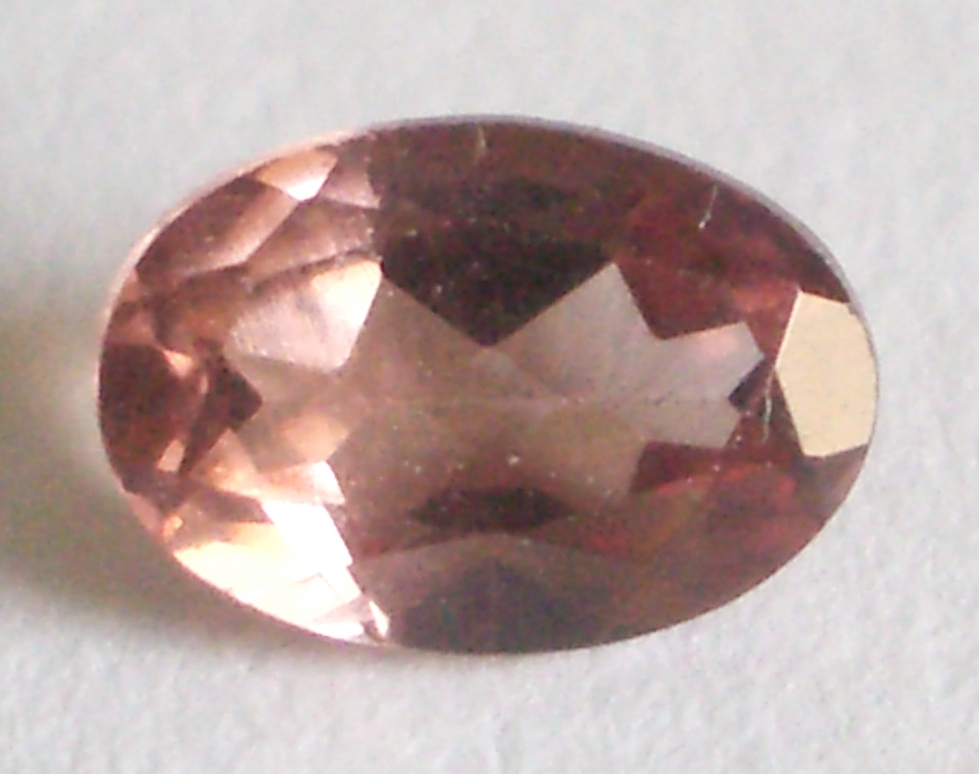 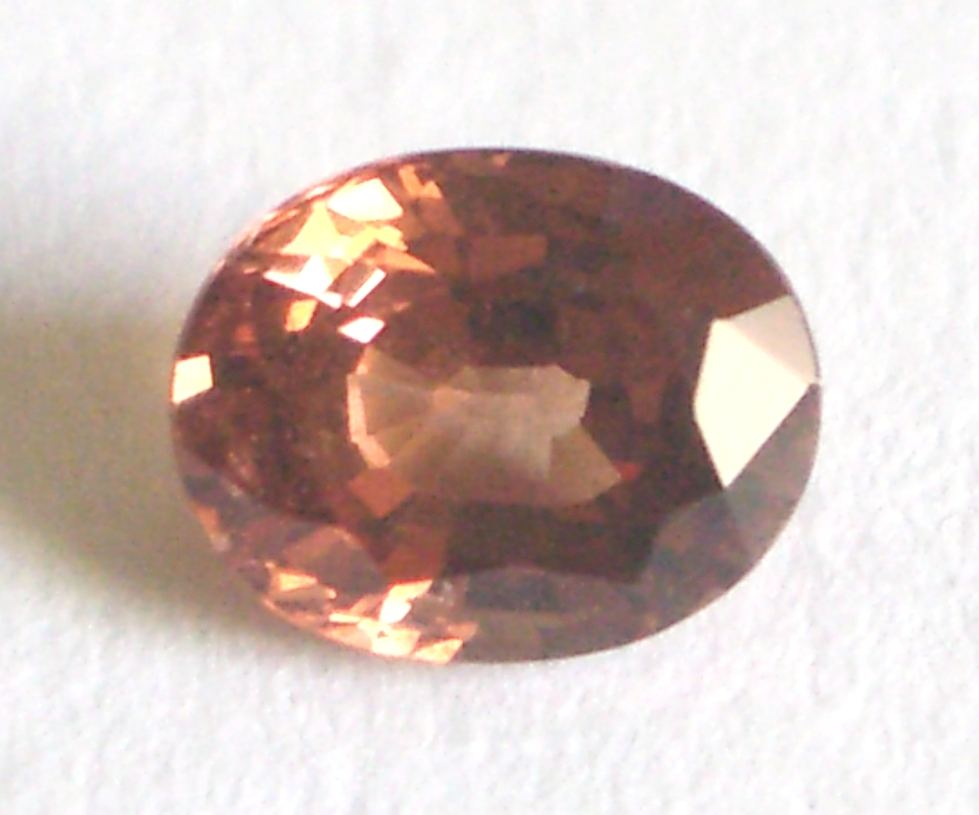 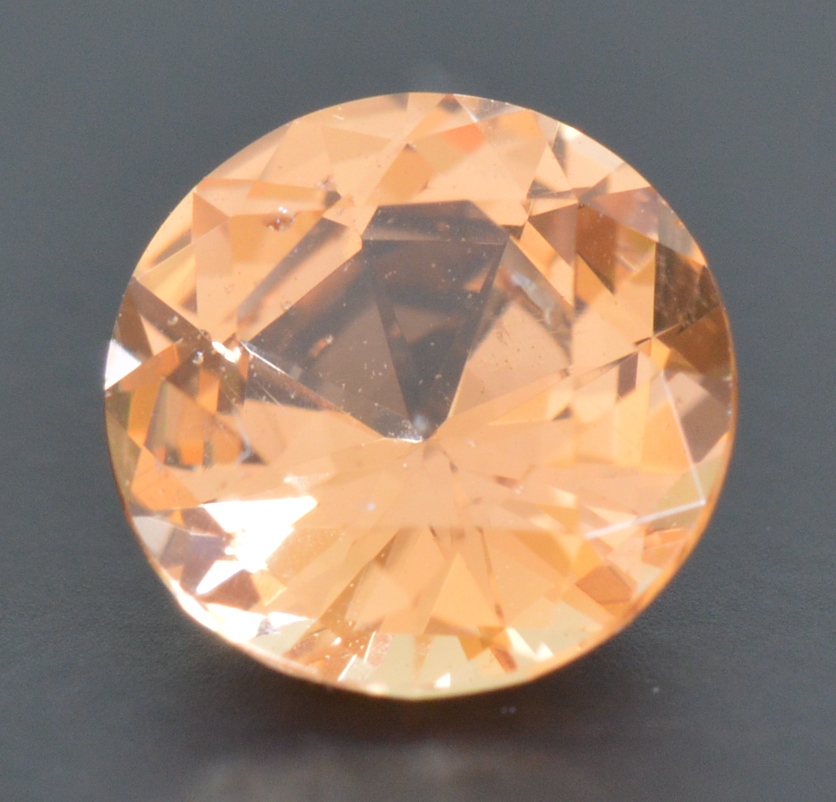 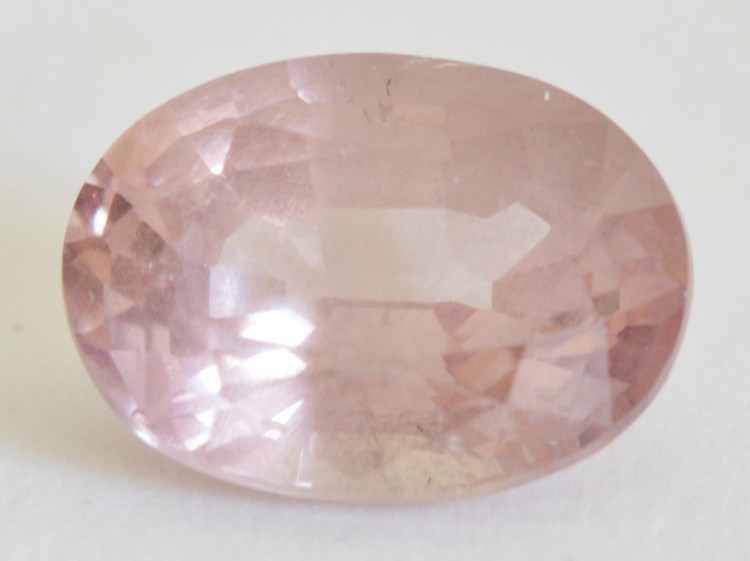 We encountered an unusual light orange Malaya Garnet (pictured below) that has a yellowish tint not found in other Malayas. This gem is primarily Spessartine in composition (52% Spessartine, 30% Pyrope, 18% Almandine), with body color similar to “fanta” orange Spessartines, but with more yellow. This Malaya was incorrectly sold as a regular orange Spessartine Garnet, but Spessartine would have significantly greater magnetic susceptibility than this gem. We refer to this gem as a Malaya Spessartine, in contrast to the 3 orange Malaya Pyropes pictured above.

Surprisingly, this yellowish orange Malaya Spessartine (below) fluoresces red under long wave UV light due to chromium. As we would expect, it also shows a Pick-up response to a magnetic wand, due mostly to manganese content. Manganese does not quench fluorescence from chromium, but no other high-manganese orange Malayas that we have tested show fluorescence.

The likely reasons that yellow color (from manganese) and red fluorescence (from chromium) can coexist in this orange Malaya are: 1) the concentration of chromium is so low that it is not visible as red body color but is detectable under longwave UV light, and 2) the concentration of iron is low enough that it imparts little or no red body color, and is too low to quench all the fluorescence from chromium. Fluorescence in idiochromatic gems of any kind, including standard orange Spessartine and Malaya Spessartine, is rare.

﻿Though almost colorless, the small Malaya above has relatively high magnetic susceptibility (SI 17.62), containing enough manganese to be easily  picked up by an N52 magnet. This is an indication that most of the  manganese in this Garnet is cryptic (cannot be detected visibly as color but can be detected by magnetic response). Divalent manganese (Mn2+) is known to be a weak chromophore, and by itself may only contribute to color when in high concentrations. Although it has never been reported, we suspect that completely colorless Pyrope-Spessartines or Pastel Pyropes could exist if the concentration of manganese (Mn2+) was low enough and the concentration of chromium/vanadium  was also very low or absent.

﻿We found that some light pink Malayas from Tanzania fluoresce pink or red under longwave ultraviolet light due to chromium, as does the oval Malaya pictured below. This contradicts other gemological resources, which describe Malaya Garnet as inert to UV light.

﻿Pink-orange or “peach” colored Garnets from Mahenge, Tanzania are being marketed by the trade name  “Mahenge Garnet". Two such gems (below) that we tested have similar composition to other light pink Malayas and to “Masasi Bordeaux” Garnets. These gems do not fluorescence under UV light.

﻿Primarily Pyrope: On average, we found that Malayas contain a higher amount of Spessartine than do Standard Pyropes. Never the less, 95% of the Malayas we tested are primarily Pyrope in composition, and we classify these as Malaya Pyropes. Only 6 samples out of 108 Malayas in our study have Spessartine as the primary component. Two of those Malaya Spessartines were barely over the Pyrope-Spessartine boundary.

Below is the composition graph for 108 Malaya Garnets tested. A broad range of composition is represented in Malayas, with refractive index ranging from a low 1.735 to a high of 1.782, and susceptibility ranging from SI 11.27 all the way up to SI 33.24. All Malaya gems of average size show a Pick-up response to an N52 magnet.

“Imperial” is a trade name or marketing term that is most often applied today to Malaya Garnets that have a brown-orange-pink color reminiscent of the color of  ﻿"Imperial" Topaz. "Imperial" Malaya Garnets have an intermediate tone that is neither overly dark nor overly light.