Natural vs. Synthetic: The red color of Ruby is due to chromium, and in natural Ruby, red color can be modified by iron, vanadium and color processes. A handheld magnet cannot be used to definitively distinguish natural Ruby from synthetic Ruby, as both can be weakly magnetic. But as with Sapphire, natural Ruby is generally more magnetic (Weak to Moderate, SI <20-113) because it contains a small amount of detectable iron (Fe3+) in addition to chromium (Cr3+). Any Ruby that shows anything greater than weak magnetic attraction during floatation is almost certainly natural. An inert response points towards synthetic origin. However, some Rubies from low-iron regions such as Burma and Tanzania might also possibly be inert (diamagnetic). In our limited study, we did not find any natural Rubies that were not attracted to a magnet.

Concentration of Iron: Iron (Fe3+) not only raises the magnetic susceptibility in natural Ruby, it also it also modifies the pure red color imparted by chromium. As we noted with high-iron Sapphires, Rubies with higher iron content (approx. 0.5%-1% iron oxide Fe2O3) and higher magnetic susceptibility generally have gray or black undertones, resulting in darker or more subdued colors. The resulting appearance can closely resemble red Garnet, as illustrated by the dark Thai Ruby pictured below (left). This gem has the highest magnetic susceptibility (113 SI) of any Ruby tested in our study.

In low-iron Rubies with vivid red color, we can see chromium absorption spectra using a hand-held spectroscope or a spectrometer. As with Sapphire, Rubies formed in metamorphic low-iron regions such as Mogok in Burma or Winza in Tanzania tend to show the purer red colors, while Rubies from igneous high-iron regions such as Thailand tend to show dark grayish-red colors and greater magnetism.

High chromium content also causes some natural Rubies, and all synthetic Rubies, to fluoresce bright red under long wave ultraviolet light. Fluorescence may also be visible to some degree in daylight, adding brightness to the daylight color of the Ruby. Synthetic Rubies fluoresce more brightly under longwave UV light than most natural Rubies since they contain more chromium (approx. 2% chromium oxide Cr2O3) and no significant iron to quench fluorescence.

Our investigations of natural Ruby found that the degree of fluorescence corresponds inversely to the measured degree of magnetic susceptibility. In other words, the more magnetic a natural Ruby is, the less fluorescent it is. This is because iron suppresses or masks the fluorescence produced by chromium, as noted by Basil Anderson while working with the spectroscope over 60 years ago. The low-iron Burma Ruby pictured below is weakly magnetic and shows strong red fluorescence under long wave UV light.

Treatment with high heat can improve the clarity of Ruby by dissolving Rutile "silk". Extended heating at high temperatures can also enhance color by actually removing blue color, but heat has no direct effect on red color (Kurt Nassau, 1981). Because chromium rather than iron is the predominant metallic chromophore in Ruby, heat treatments may have no effect on magnetic response or magnetic susceptibility, as the valence state of chromium (Cr3+) is not changed. Only the valence state of the small amount of iron changes. However, heat treatment may reduce the overall magnetic susceptibility of a gem to some degree, regardless of the valence states of the metals involved.

This concludes our discussion of Sapphire and Ruby. To read our in-depth 3-page report on magnetism in Spinel, go to Spinel.

Synthetic Ruby is colored almost entirely by chromium (Cr3+), and usually contains less than 100 parts per million iron. Synthetics are therefore inert or very weakly magnetic (Inert to Weak, SI 0-17). When we see any magnetic attraction in a synthetic Ruby, we are detecting chromium rather than iron. Natural and synthetic Rubies contain a higher concentration of chromium than most other types of gemstones, but the amount chromium needed to create their vivid red color is still very low. Chromium content in Ruby hovers at the absolute lowest level of magnetic detectability by an N52 neodymium magnet (approx.0.4% chromium oxide). Synthetic Star Rubies are also encountered. Synthetic rutile is used to create the asterism. 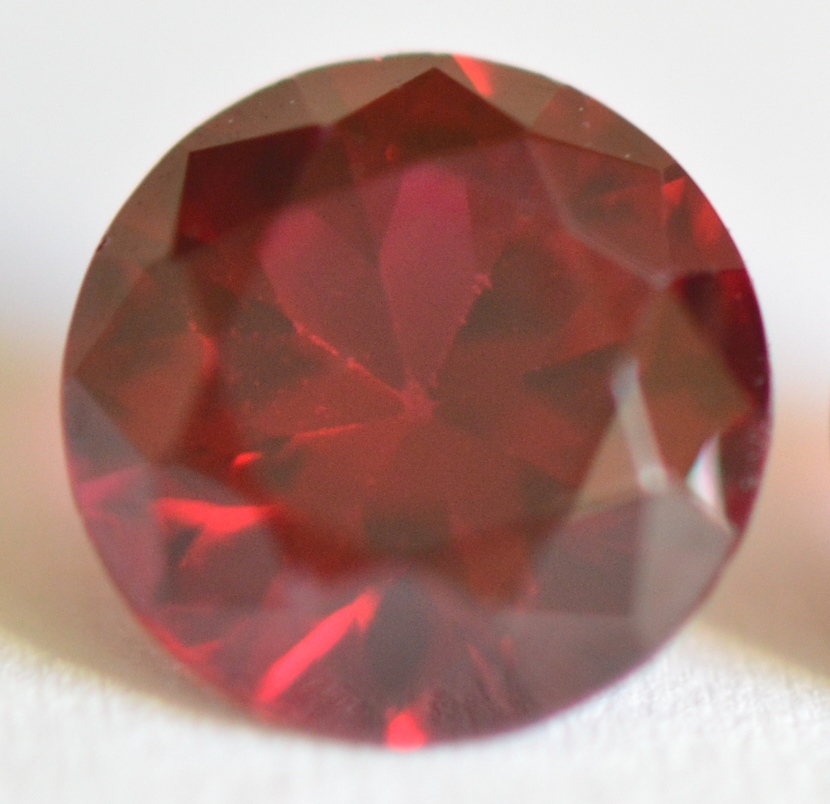 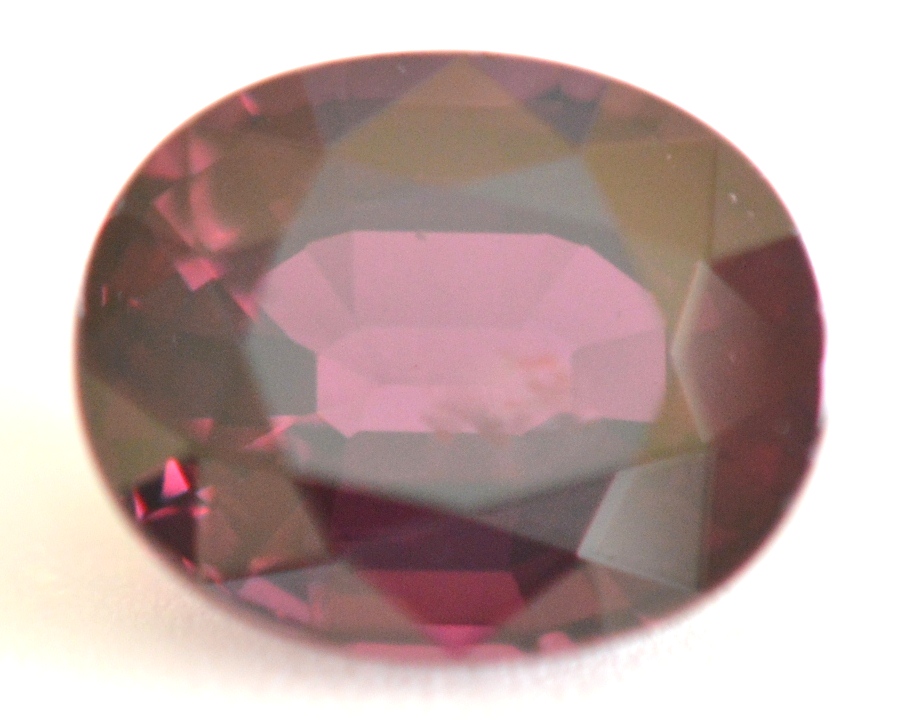 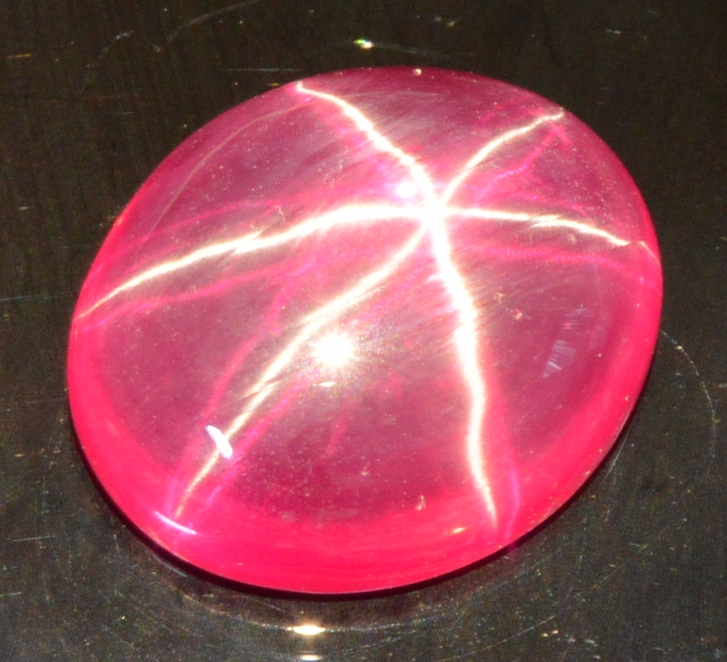 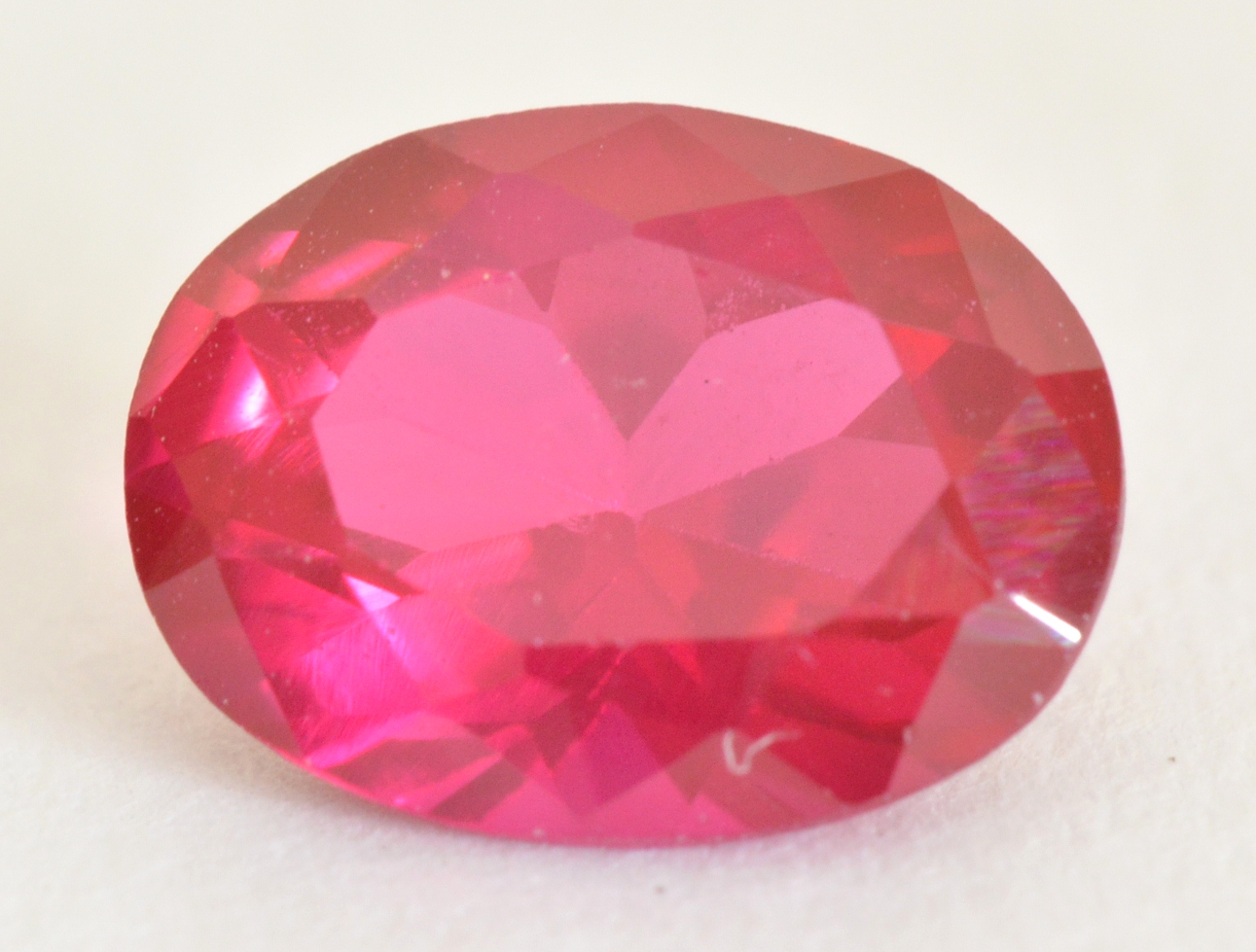 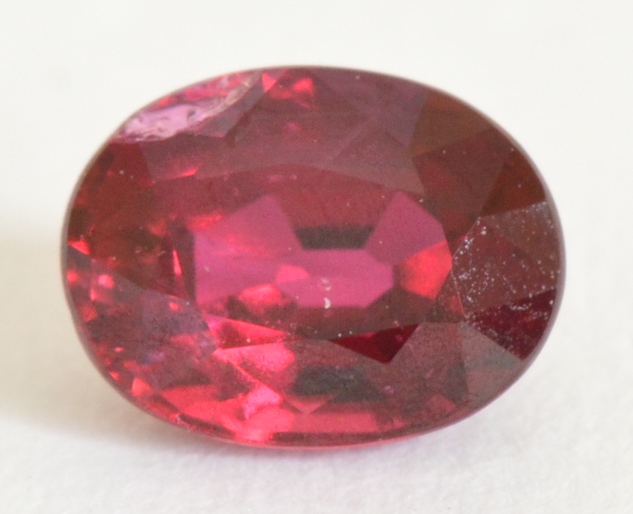 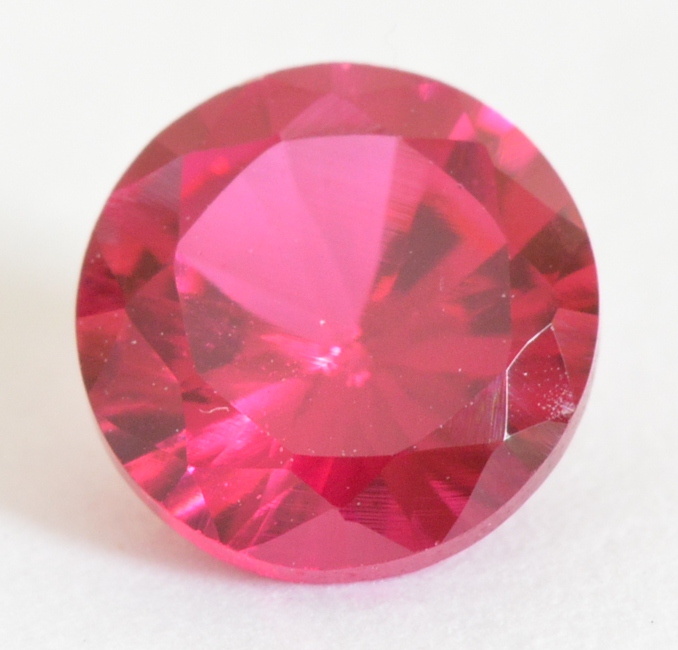 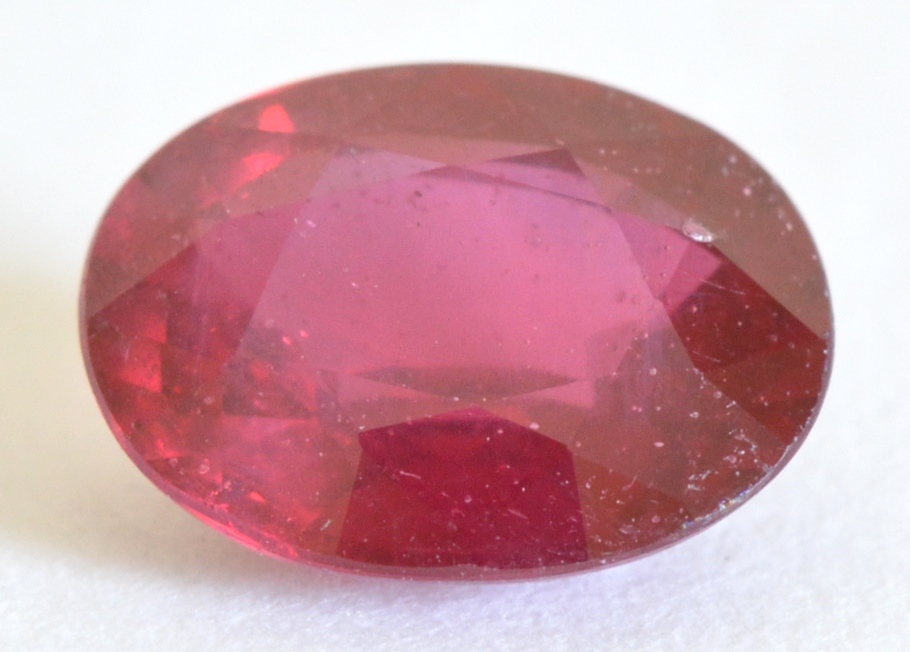 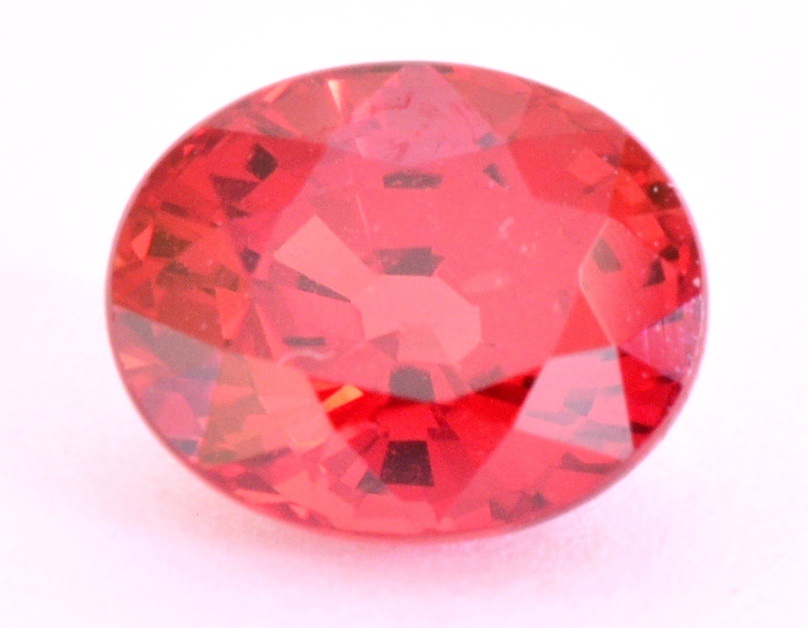 Treatments: Unfortunately, a magnetic wand does not provide a means to distinguish between treated and untreated Ruby. Natural Rubies that are beryllium diffused or glass-filled have a similar magnetic susceptibility range as untreated natural Ruby. The Beryllium-diffused gem below (left) is a Sapphire from Songea, Tanzania that has been diffused to alter the color to bright orange-red. The glass-filled Ruby on the right was created by filling the crevices in low-quality Ruby with lead glass that has a high refractive index similar to the R.I. of Ruby. Both of these gems show weak ﻿magnetic responses, as do untreated Rubies.