Green Jade (green Jadeite and green Nephrite) contains iron and exhibits moderate to strong magnetism. Jade imitations such as green dyed Chalcedony or dyed Calcite or imitaions made from green polymers are all inert. However natural green Jade look-alikes such as Serpentine, Hydrogrossular Garnet, Australian Prehnite and some Chrysoprase are also strongly magnetic, and these cannot be distinguished from genuine Jade by magnetic response.

Aquamarine is a variety of Beryl that can look like pale blue Topaz. Conveniently for us, Aquamarine is weakly to moderately magnetic due to iron, and can easily be separated from blue Topaz, which is a diamagnetic gem colored by color centers.

Tanzanite can be mistaken for Iolite, a gem with similar violet color. However, Iolite is colored by iron, and it is strongly attracted to a N52 magnet when floated. Tanzanite is colored by small amounts of vanadium (V4+), and shows no magnetic attraction.

More Examples: Below are more examples of look-alike pairs of natural gems that can easily be separated by differences in magnetic response:

As we become familiar with colored stones, we can often make distinctions between species and varieties based on visual appearance, and at times we can curtail the identification process by eliminating all but just 2 or 3 possibilities. At that point, we may be able to make a final identification simply by noting the magnetic response. In most cases, the floatation method is needed to make the response visible. Below are some examples of look-alike gem pairs that can be separated by magnetic response.

Citrine Quartz and transparent yellow Feldspar such as Orthoclase, Labradorite and Bytownite can look very similar. If you can find an optic figure using a conoscope, a "bull's eye" identifies Quartz. Or just use a magnet to separate them. Most Citrine derives its yellow color from color centers involving aluminum, and is therefore magnetically inert (except in rare cases). Yellow Feldspar gems derive color from iron impurities (Fe3+). Most show weak to moderate magnetic attraction when floated.

Separating Look-alike Garnets: Because most species within the Garnet Group show a Pick-up response, a magnetic wand is frequently not adequate to separate one type of Garnet from another. However, there are a few instances for which a magnet can be used to separate Garnets species that look alike. An example is orange Grossular Garnet (Hessonite) and orange Spessartine Garnet, two species that can be indistinguishable with the naked eye. Also, green Grossular Garnets such as Tsavorite and Merelani can look like green Andradite (Demantoid) Garnet.

We always carry a magnetic wand and UV flashlight in our pocket when we intend to buy Garnets at a gem show, as sellers frequently misidentify Garnet species and varieties.

On occasion, we can distinguish between 2 different varieties of Garnet within the same species using a magnetic wand. Chrome Pyrope and Standard Pyrope can look identical in reflected light, but Chrome Pyrope has less iron content and only shows a drag response (unless the gems are tiny, in which case they pick up). Standard Pyrope gems of average size always pick up.

Orange Sapphire and orange Spessartine Garnet is another example of a look-alike pair involving Corundum and Garnet. The two species can easily be separated with a refractometer or polariscope, but when we are buying a parcel of orange Sapphires, we will probably not have these tools available to verify that no Spessartine Garnets are mixed into the parcel. Fortunately, we can use our portable magnetic wand to check the entire parcel in just a few seconds. Only the Spessartine Garnets pick up. A UV flashlight can also be used to quickly separate a parcel of these gems, as only the orange Sapphires fluoresce under long wave UV light.

Summary of How to Use a Magnet

A neodymium magnet is an important supplemental tool for gem identification. It's particularly handy as a quick identifier for Garnet, and as a separator for synthetics and look-alike gems, including Diamonds. To date, magnetism is a largely unknown aspect of gemology. The field is wide open, and awaits further investigation by hobbyists and gemology researchers alike. Anyone can experiment using magnetic wands on his/her own gems, jewelry and mineral specimens to discover ways that magnetic responses can aid in identification.

Ruby and Chrome Pyrope is another example of a Corundum and Garnet look-alike pair. Both are dark red and colored by chromium and iron. But Chrome Pyrope Garnet contains much more iron than Ruby, and also more chromium. Most Rubies are only weakly magnetic, while Chrome Pyrope shows a Drag response. UV fluorescence can also be used to quickly separate Ruby from Chrome Pyrope Garnet. Only Ruby fluoresces.

Pink Pastel Pyrope is an unusual and beautiful variety of Pyrope that has lower iron and manganese content than the less rare but equally beautiful Pink Malaya Garnet. Gems of these 2 varieties look alike, but a simple magnetic wand allows us to distinguish between them. Pastel Pyropes of average size show a Drag response, while Malaya Garnets show a Pick-Up response.

For a more complete list of look-alike gems that can be separated with a magnet, including synthetics and imitations, refer to the Separation Chart for Look-alike Gems.

More information about how to separate varieties of Garnet can be found on page 12 of the Garnet section titled Distinguishing Garnet Species and Varieties. 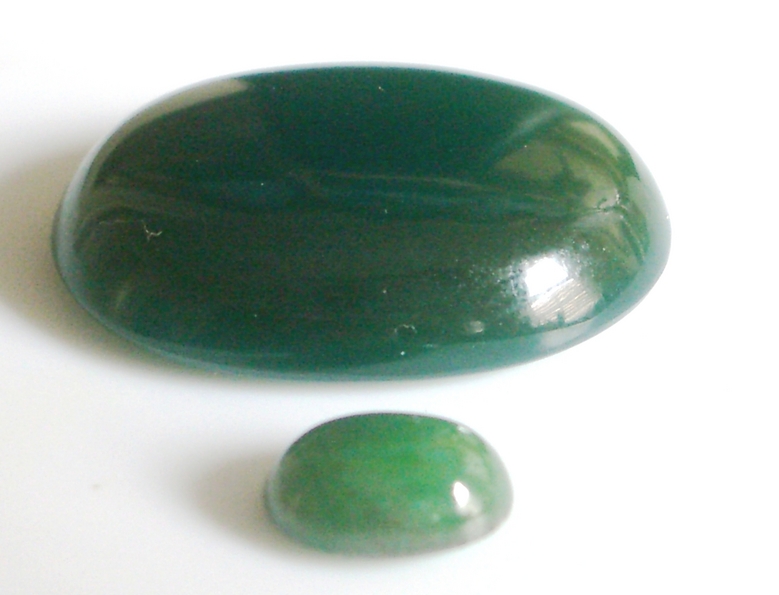 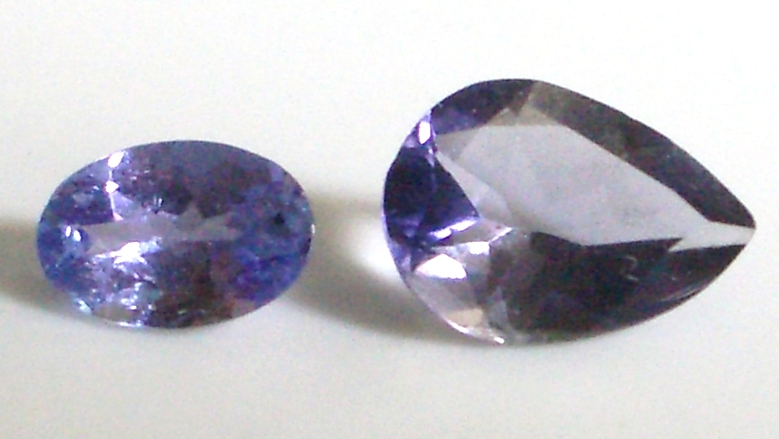 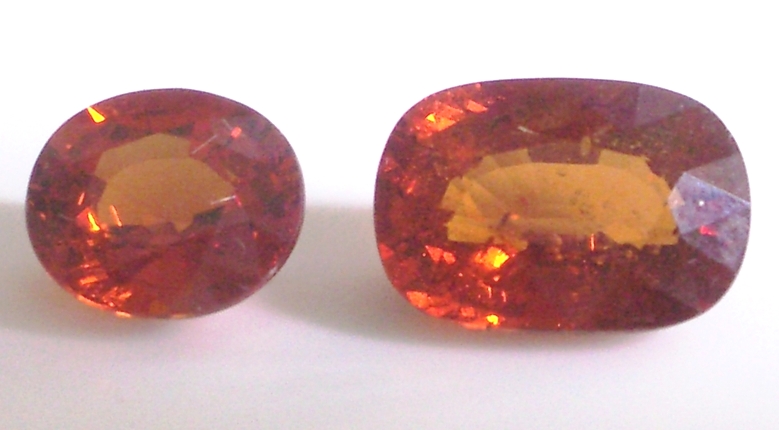 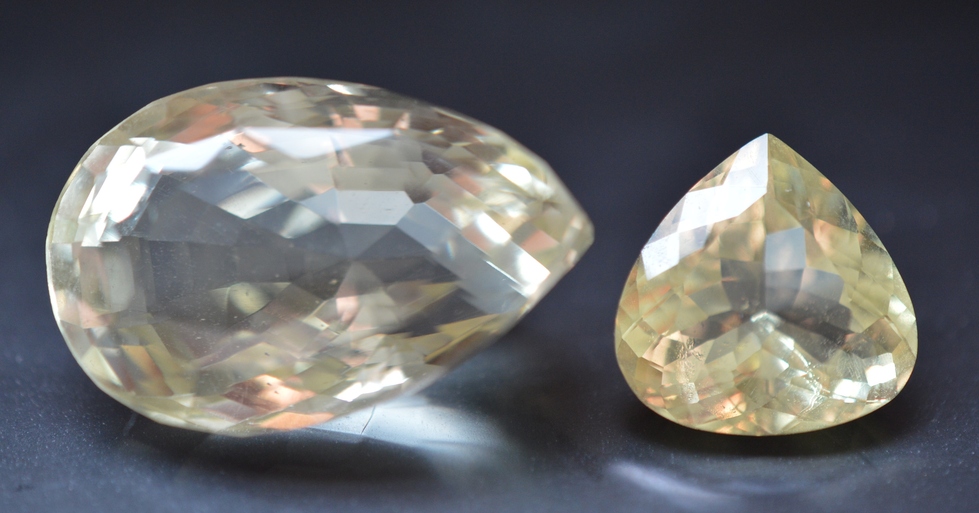 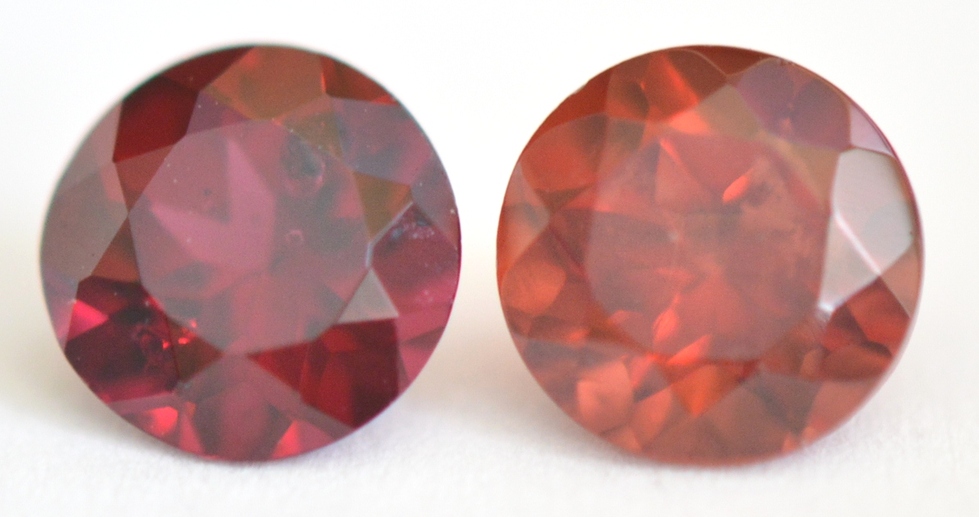 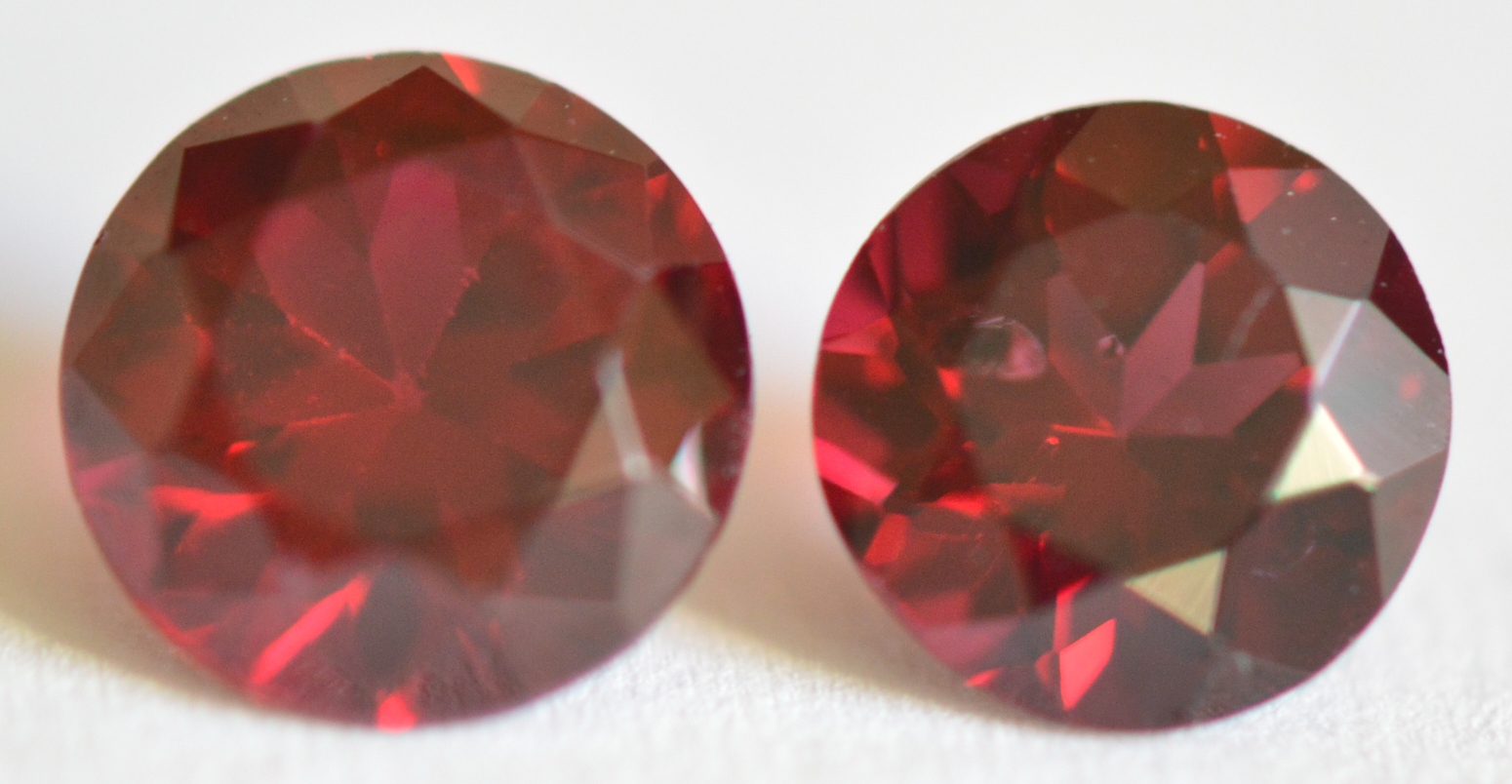 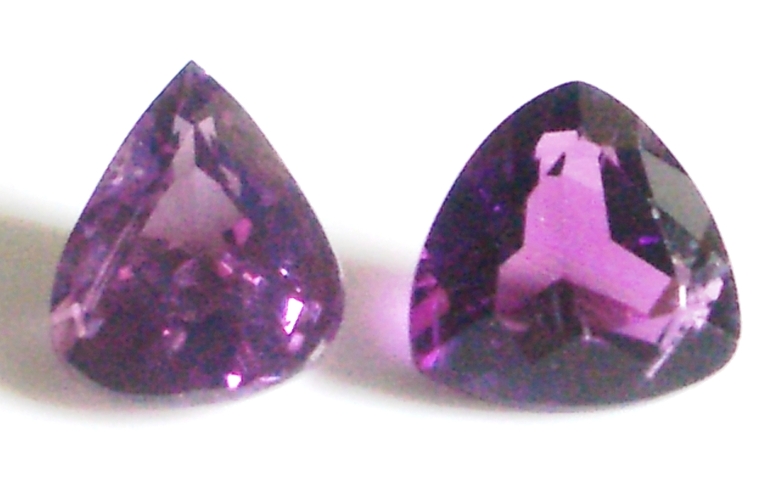 Purple Sapphire and Rhodolite Garnet can also be separated using some other simple tools, such as a spectroscope or a UV flashlight. Only Garnet shows a strong iron spectrum, and only purple Sapphire fluoresces red under long wave UV light.

In the photo below, Peridot on the left and Chrysoberyl on the right are virtually indistinguishable with the naked eye. Gemologists generally describe Peridot as an idiochromatic gem, deriving green color from significant amounts of iron within its chemical structure. Peridot is one of the few gems that shows a characteristic Drag response without the need for floatation. Chrysoberyl is also colored green primarily by iron, but as an allochromatic gem species, it contains a much lower concentration of iron. Chrysoberyl must be floated in order to see a magnetic response, which ranges from weak to moderate.