Both shapes of Chrysoprase shown here, faceted and domed cabochon, show a  strong magnetic response when the Floatation Method is used.

Gem Size:  In general, gem size doesn't influence magnetic response unless the Direct method is used. With the Floatation Method, it's possible that gems of very small size can respond less obviously than larger ones because of the small surface area subject to the magnetic field. This is most noticeable in tiny (melee) gems that are weakly magnetic, as they must overcome inertia and slight friction of the gem raft moving across water in order to show a response (see photo below).

The five highly magnetic transparent primary gems other than Garnet that show a drag response can also show a Pick-up response when those gems are small and light. Approximate cut-off points between Drag and Pick-up responses for these gems are: Peridot and pink CZ may pick up under 0.75ct.; Indicolite, Verdelite green Tourmaline and manganous yellow Tourmaline may pick up under 0.50ct.

When very small, Peridot might be confused with Demantoid Garnet, as both green stones pick up. But only Demantoid jumps to the magnet.

Magnetic Response and Magnetic Susceptibility ranges for most gemstones are listed on the Magnetic Susceptibility Index linked at the top of this page. The magnetic response that a gem shows when a magnetic field is applied can be affected by a number of factors, and the visible responses don't always correspond exactly to the measured magnetic susceptibility. Physical factors such as the shape, cut, size and weight of a gem can at times cause responses to appear somewhat weaker or stronger than what is actually  measured with a magnetic susceptibility balance. Magnetic inclusions in certain gemstones can also occasionally affect magnetic responses.

Gem Weight: Although gem weight is virtually irrelevant when we use the Floatation Method, Direct responses (Pick-up and Drag responses) are weight-dependent. This is by far the most significant factor that affects magnetic responses. Larger Garnet gems and faceting rough may be too heavy to pick up, but most will drag. Approximate cut-off points between Pick-up and Drag responses for Garnets are: Spessartine over 4-5ct, Almandine and Andradite over 2-3ct, Pyrope, Rhodolite and Malaya over 1-2ct, Chrome Pyrope over 1ct, Mali Garnet over 0.5ct.

When a magnet is held in front of a gem that has a large flat surface area at its table facet, the gem may show magnetic attraction that is disproportionate to its actual magnetic susceptibility. The large green Beryl with its enormous table facet pictured below shows a moderate magnetic response when the floatation method is used. However, its actual measured susceptibility is considered weak at only 22 X 10(-6) SI.

Testing a Small Gem with a Small Surface Area

Testing a Large Gem with a Large Table Facet

We must be careful not to identify green Tourmaline or Peridot gems as Demantoid Garnets simply based on the Pick-up responses of these gems when they are very small and light (less than a third of a carat). 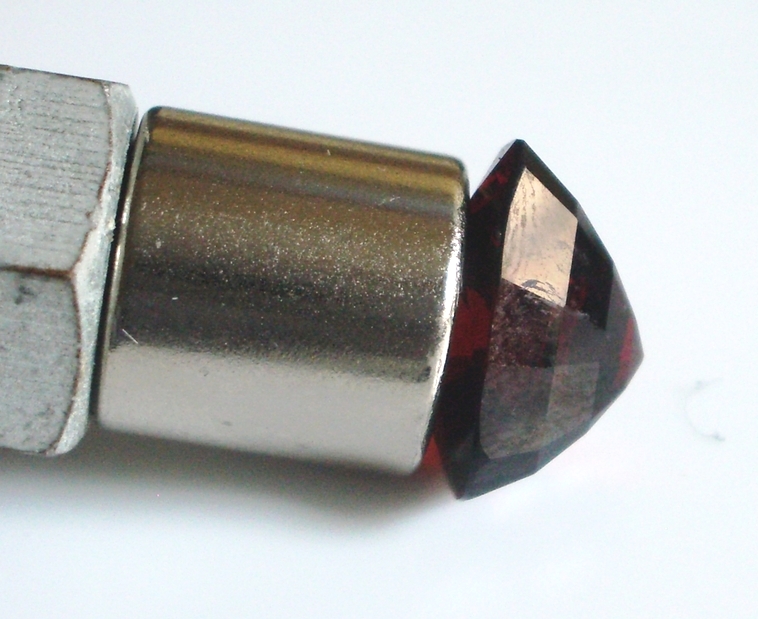 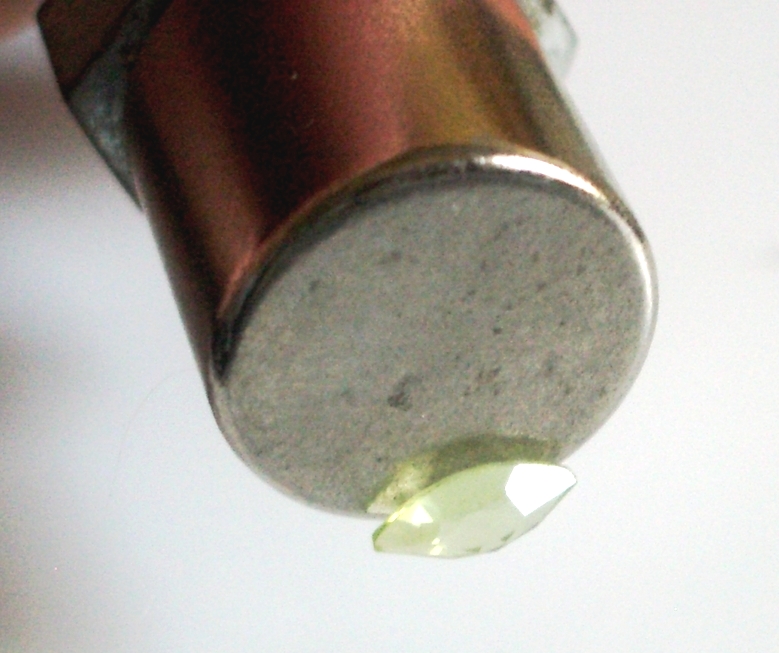 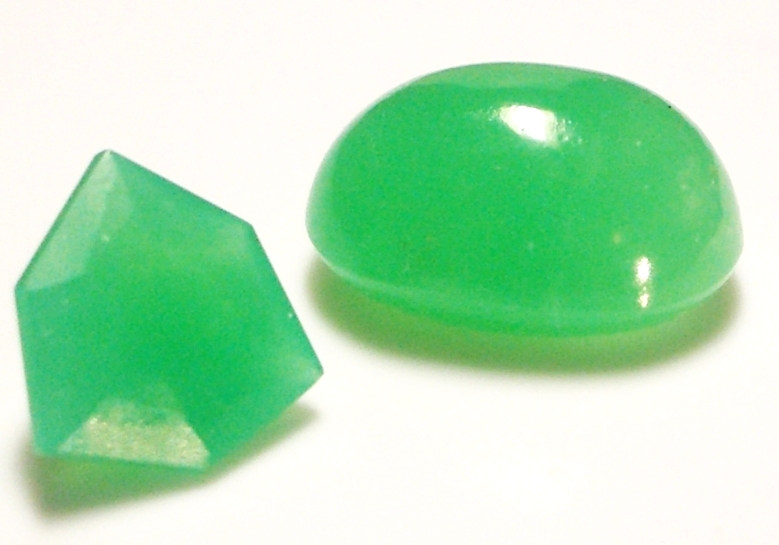 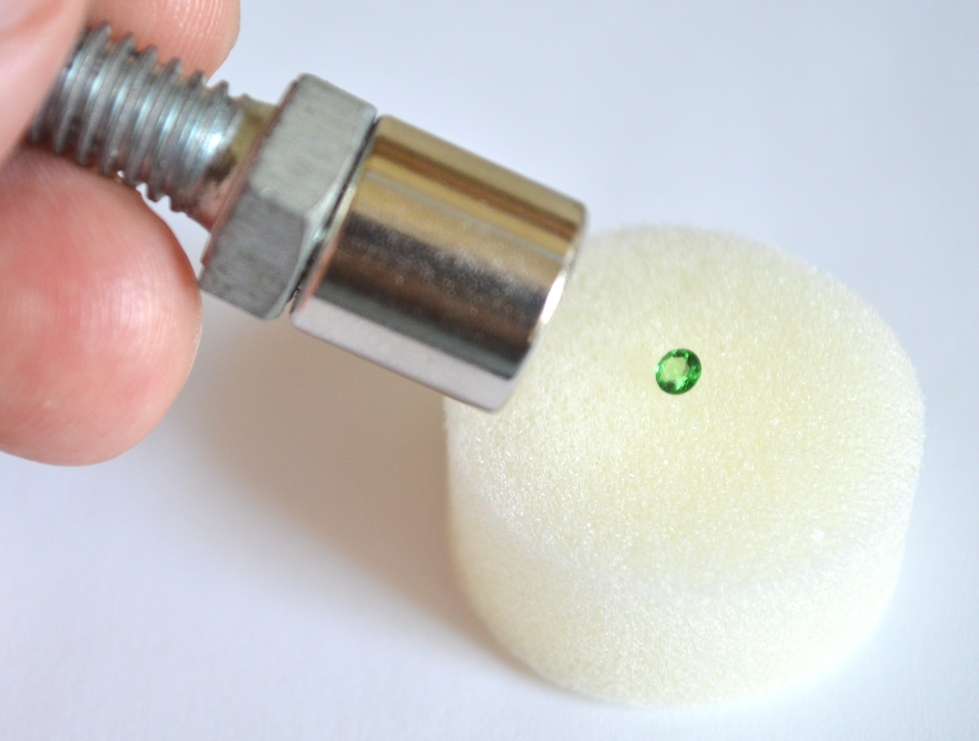 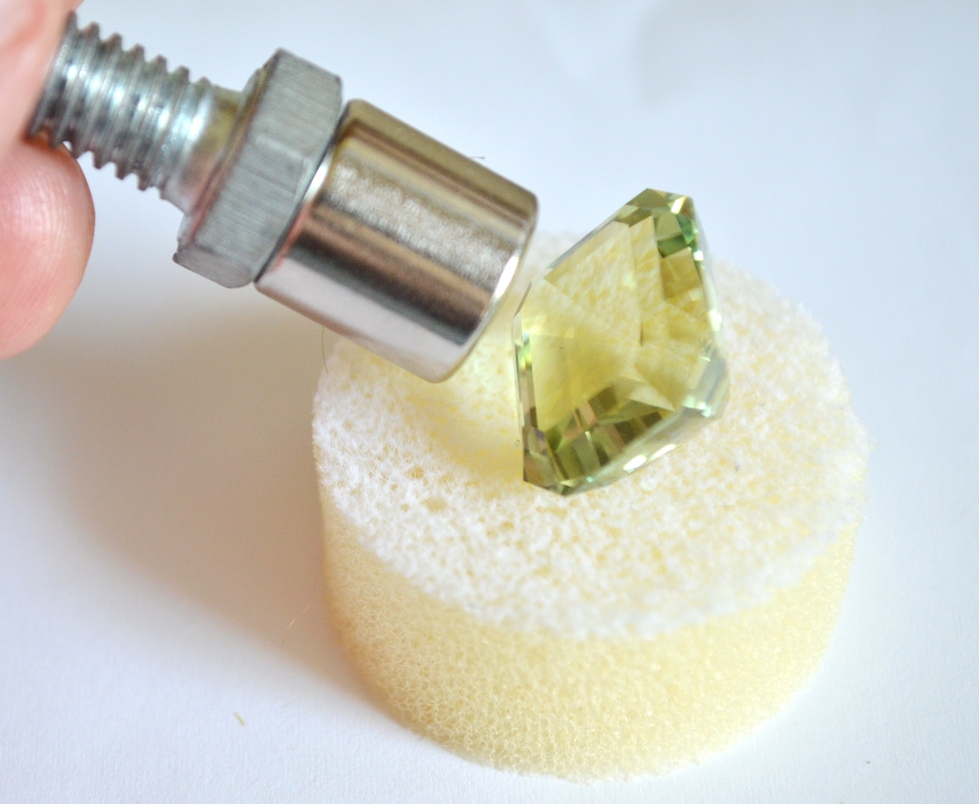 With the Direct Method, the crown of a gem with its flat table facet will pick up or drag more readily than the tapered end of the pavilion side with its small facets. In a similar way, an uncut mineral rough with irregular surfaces will pick up or drag significantly less readily than a cut gem with a smooth flat surface. However, when the Floatation Method is used, the pavilion side of cut stones and the irregular surfaces of rough stones respond to a magnet nearly to the same degree as the flat crown side of cut stones.

Pavilion of a Faceted Peridot

Such variations in magnetic response between gems of different shapes, sizes, cuts and surface areas are not significant enough to jeapardize the overall reliability of magnetic testing, as we use the observed responses only as approximate indicators of magnetic susceptibility. Differences between Moderate and Weak responses, or Moderate and Strong responses, may be occasionally obscured during Floataion, as well as differences between Drag and Pick-up responses during Direct testing, but these variations are rarely great enough to hinder our ability to make clear distinctions between Diamagnetic, Weak, Strong and Direct responses.

When the Direct Method is used, the translucent cat’s eye Chrome Diopside cabochon shown below shows a Drag﻿ response. The measured magnetic susceptibility of this gem (SI 373) predicts that it will drag, but the Drag response is weak and difficult to capture, as if the magnet cannot fully "grasp" the gem. This is because we are applying the magnetic wand to the side of a shallow dome shape. This shape permits only a small portion of the gem's surface to directly touch the magnet.

A cabochon dome responds to the Direct Method less strongly than a flat table facet.

Gem Shape and Cut: Whether we are using the Floatation method or Direct method, magnetic response is somewhat affected by a gem’s shape and cut. The larger the flat surface area of the gem when held parallel to the magnet, the better the magnet is able to pull the gem.

Cabochons with gems with dome tops don’t pull quite as easily as faceted gems, and pear cuts don’t pull quite as well as square cuts with larger facet tables and surface areas. But all exposed gem surfaces are subject to the magnetic field of a magnet. In most cases, we find that variations in gem shape and cut don't significantly alter the responses we see with a ﻿magnetic wand.

Crystalline Quartz is an exception, as many different types of mineral inclusions can be found in relatively large sizes within Quartz. In the absence of large inclusions, crystalline Quartz is diamagnetic. However, when such inclusions are present, they can induce magnetic responses that are characteristic of the included mineral.

The most common example is Tourmalinated Quartz, which usually contains black Tourmaline. Much more rarely, we may also encounter blue Tourmaline in Quartz. In Quartz gems, black or blue Tourmaline inclusions can create weak magnetic responses. Tiger's Eye Quartz is a translucent to opaque Quartz than can sometimes show strong magnetic attraction due to Hematite inclusions.

Topaz is another transparent diamagnetic mineral species that can contain sizable inclusions that are attracted to a magnet (such as inclusions of Garnet or Tourmaline), but we rarely encounter these in faceted Topaz gems. The Topaz shown below contains a red Spessartine Garnet inclusion. This is the first reported case of a Topaz showing visible magnetic ﻿attraction (due to the inclusion).

On rare occasions, inclusions of metallic particles or compounds containing ferromagnetic/ferrimagnetic metals can cause a "false" or unexpected magnetic response when we test a gem with a magnet. These inclusions may appear as black particles of iron compounds such as Magnetite or some other mineral. Magnetite itself holds a magnetic charge, like a weak permanent magnet.

In a feature article in Gems and Gemology (Winter 2012), we published the first known report of gem-grade natural Diamond showing a magnetic response due to natural inclusions (probably pyrrhotite, a black sufide mineral). We have also encountered a weakly magnetic Beryl gem in which green color and magnetic susceptibility are due to unidentified green inclusions deposited inside growth tubes. Such cases of magnetic inclusions are unusual and rare to find in natural transparent gems.

However, there are a couple of gems in the Feldspar group to look out for: Oligoclase ("Confetti" stone or "Sunstone" variety) and Labradorite ("Spectrolite" variety). Geologists report that Feldspar is often a host rock for Magnetite. The orange confetti-like inclusions in Oligoclase sunstone are composed of thin flecks of Hematite, which are too small and thin to induce magnetic attraction. However, spots of black Magnetite can also be present, and these can induce visible magnetic attraction.

Our second example, "Spectral"" Labradorite, is iridescent due to surface diffraction of light. Spectral Labradorite is usually not magnetic, but when it contains microscopic particles of magnetite dispersed throughout the gray body of the gem, a magnetic response may be apparent. Depending on the concentration of Magnetite, such responses can range from weak to strong.

As we have shown for Quartz, Diamond and Topaz, colorless gems of any kind can potentially show magnetic attraction if metallic inclusions are present in sufficient size or concentration. For information about how to test individual inclusions within gems in order to determine if the inclusions are the cause of magnetic response, refer to the section titled Magnetic Inclusions at the bottom of the page titled 10 Practical Uses.