Predicting Garnet Color: The Hoover method primarily measures iron and manganese in Garnets to determine the proportions of 2 or 3 end member Garnet components. The position of a graph point on a Hoover diagram predicts red color in Almandine Garnet and green color in Uvarovite Garnet, but the other 4 Garnet species show much more variation in color. Low concentrations of chromophores such as chromium, vanadium and charge transfer processes affect color but contribute little or nothing to magnetic susceptibility measurements.

Green Grossular Garnet is an example. The lowest magnetic susceptibility we can measure in green Grossular Garnets (under 20 SI) may have little if anything to do with the coloring agents chromium and vanadium from Uvarovite/Knorringite/Goldmanite. The magnetism we detect is likely due to entirely to iron (Fe3+) from the Andradite end-member.

Because the positioning of Garnet graph points on a Hoover diagram shows only the major components of a gem, it is not possible to accurately predict variations in Garnet color and color intensity by the location of those graph points when color is influenced by minor chemical components. Color variations may be due to small variations in chromium/vanadium content, and in some cases possibly to color processes such as intervalence charge transfer and even color centers. As illustrated by the 2 Pyralspite gems below, 2 Garnets of entirely different color can have the same proportions of the 3 end members (Pyrope, Almandine & Spesssartine) and share the same graph point location.

As purely descriptive terms, hybrid names convey useful information about the extent of a Garnet's hybridization. But when detailed information about any individual Garnet's composition can readily be determined using the RIMS method, we don't need to invent new intermediate species names in order to classify Garnets. We can simply use the standard mineralogical classification system, which classifies an individual specimen by its primary end-member component (i.e. the species with the highest percentage composition). Our RIMS graph method determines the primary species by the trisection in which a gem's graph point falls. A Malaya Garnet known to contain 40% Pyrope, 35% Almandine and 25% Spessartine is simply classified as a Pyrope Garnet with the variety name Malaya.

The olive-brown Garnet from Kenya and the purple Garnet from Bekily, Madagascar pictured above are both Color Change Pyropes, or as some prefer, Color Change Pyrope-Spessartines. Both gems change to pink color in incandescent light. They have nearly identical refractive indexes and magnetic susceptibilities. Both have the same major composition of 51% Pyrope and 49% Spessartine. But a slightly higher concentration of chromium/vanadium (which is magnetically undetectable) appears to be responsible for purple color in the oval gem. The shared graph point of these 2 gems is shown below, along with a spectrometer graph showing higher chromium/vanadium content in the purple Garnet.

Garnets of Different Color Can Have the Same Primary Composition

As examples of mixing in small percentages, Green Grossulars such as Tsavorite and Merelani contain only about 5% Andradite (iron, Fe3+). Ions of vanadium (V3+) and chromium (Cr3+), which impart most of the bright green color found in these Grossulars, are derived from slight mixing with Goldmanite (V3+), Uvarovite (Cr3+) and Knorringite  (Cr3+) Garnet species. That is to say, vanadium and chromium ions partially replace aluminum in the B site of the chemical formula for Grossular gems. The vanadium/chromium oxides that give green Grossulars most of their color make up less than 2% of the gem's weight, and can be as low as 0.1% or less.

When we examine Garnets with a spectrometer, we see that chromium/vanadium is important to color in all varieties of the Pyrope Garnet species, with small amounts resulting in red, pink, purple, blue and green colors. Among Garnets containing significant amounts of Spessartine, manganese (Mn2+) primarily controls orange and yellow colors. In Garnets with substantial Almandine content, iron (Fe2+) contributes purplish red color.

Andradite Garnet colors such as brown, red and yellow are likely due to Fe2+-Ti4+ and/or Fe2+-Fe3+ charge transfer processes, while yellowish green color in Andradite is the result of iron (Fe3+), and pure green or blue-green is due to chromium/vanadium.

The orange color of Spessartine (Mn2+) and red color of Almandine (Fe2+) can be attributed to their primary species content, but a Garnet's color cannot always be attributed to the chromophores present in its primary end member. For example, the red of Pyrope Garnet is not due to Pyrope content (Mg2+ magnesium). The red is derived from Almandine (Fe2+ iron) and Uvarovite/Knorringite/Goldmanite (Cr3+/V3+ chromium/vanadium).

Very small percentages of chromophores from other Garnet end members can dramatically affect color. As another example, the color of blue Color Change Garnet is not derived from it's primary component Pyrope (Mg2+ magnesium), but rather from Spessartine (Mn2+ manganese) in combination with minor Goldmanite (V3+ vanadium) and Uvarovite (Cr3+ chromium) content (Schmetzer et. al. 2009). 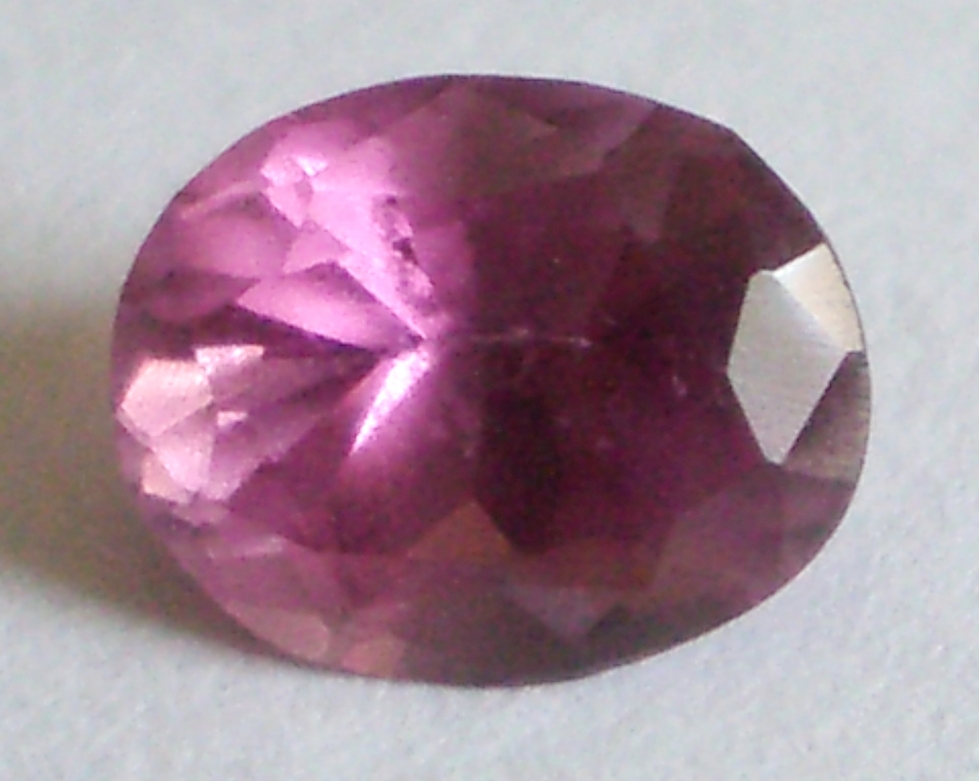 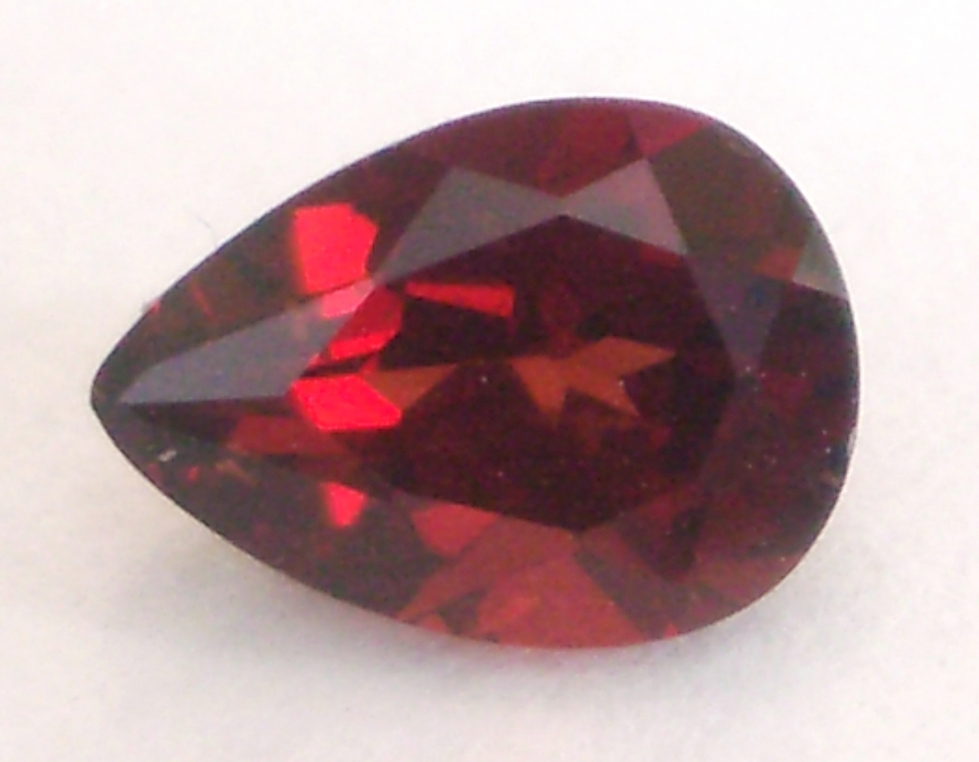 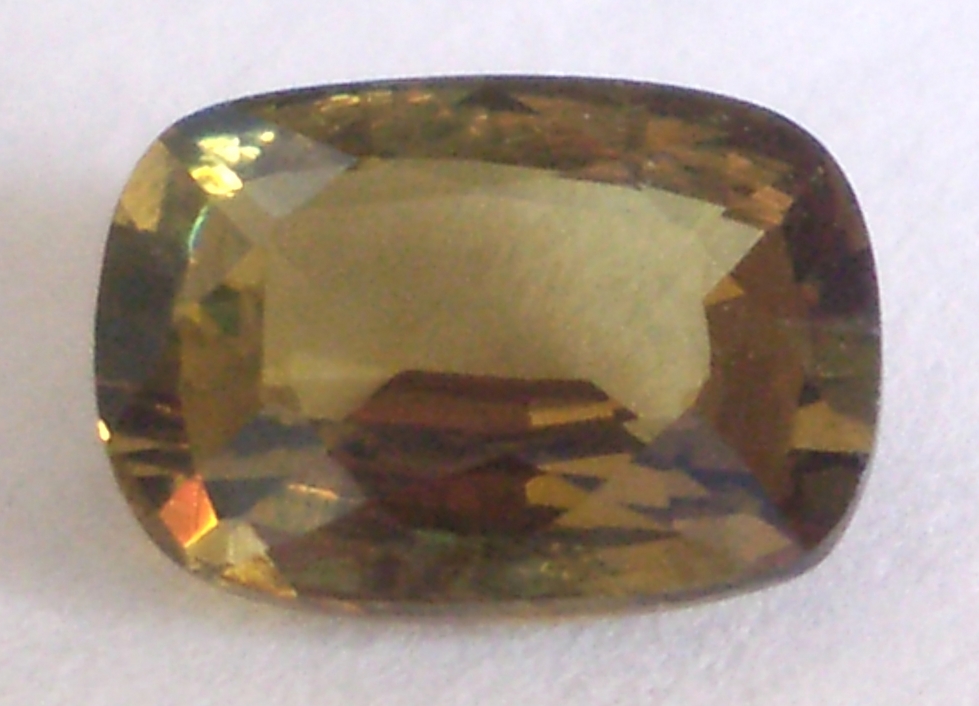 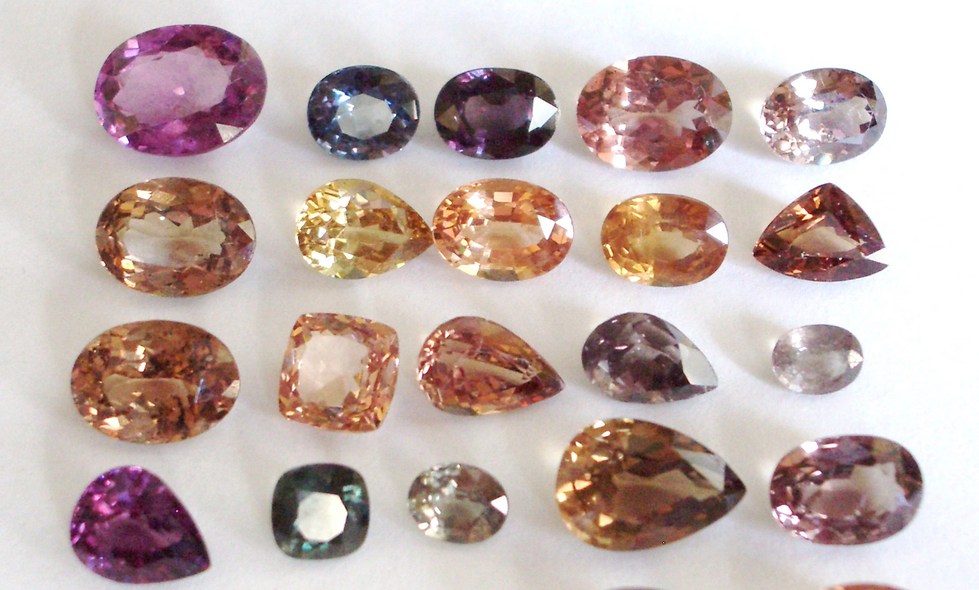 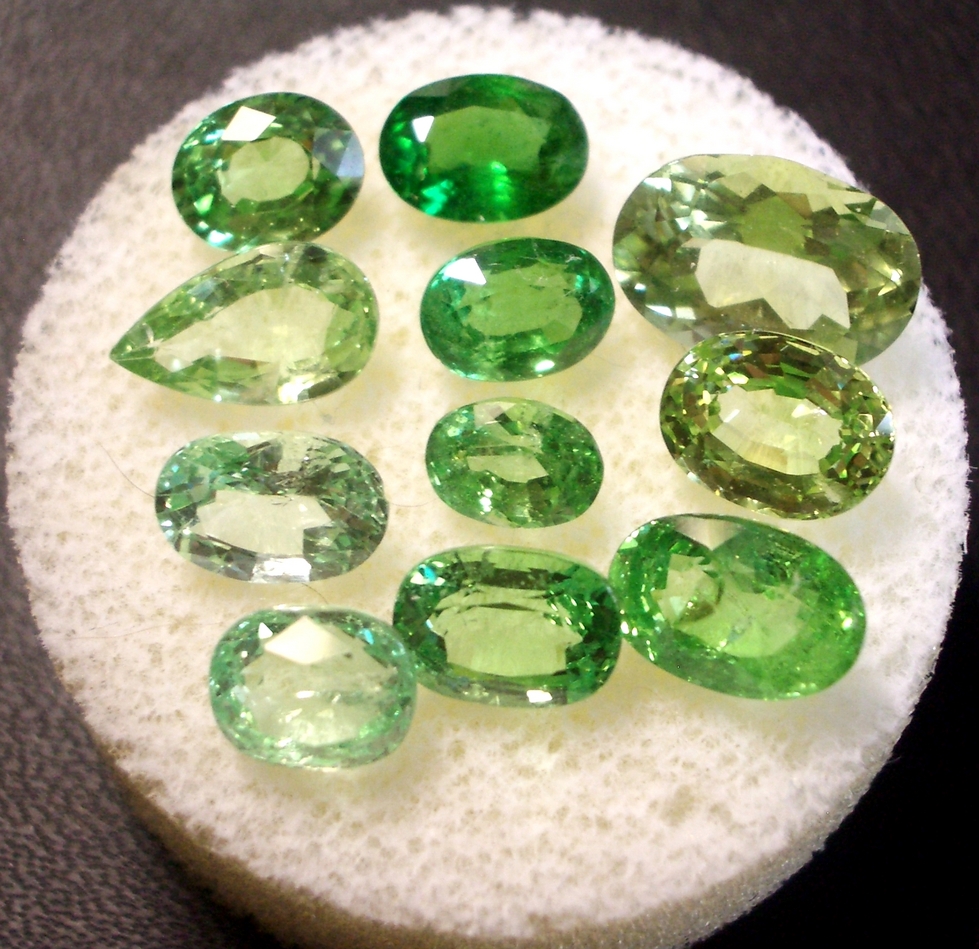 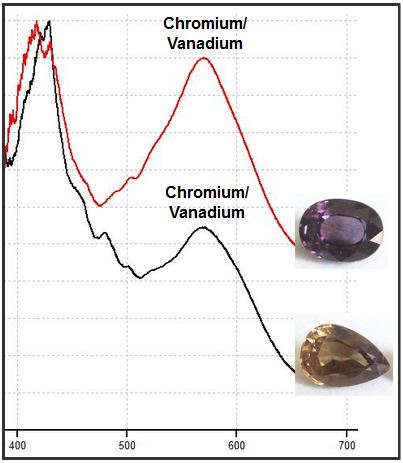 Garnet Names Based on Chemical Composition

Naming Garnets based on color is often a bad idea, as many different species and varieties of Garnet have the same body color. Professional gemologists prefer to rely on chemical composition to classify Garnets, but the composition for any individual Garnet gem as a mix of several Garnet species is generally not known or subjected to testing. Even when composition is known, there is no consensus on the most appropriate naming or classification system. At times gemologists simply ignore differences in composition between 2 gems in favor of common color, or common color phenomena such as color change, when naming Garnets.

For example, gemologists sometimes refer to purple Almandines as Rhodolite Garnets, even though Almandine is a different species whose chemical composition can be very different from that of the reddish purple variety of Pyrope (Rhodolite) of similar color. Gemologists also typically classify all Garnets that show color change as Color Change Garnets, failing to make any distinction as to whether the Color Change Garnet is primarily Pyrope or primarily Spessartine. We feel that using color or color phenomena as the primary parameter for classifying Garnets is a practice that perpetuates misunderstanding. Not only can color change gems of 2 different Garnet species appear identical, but also color change can occur in Garnet species and varieties other than typical Color Change Garnets.

When attempting to name Garnets based on composition, some gemologists (Manson/Stockton, Hanneman) have created new species names that represent hybrid Garnets. Manson/Stockton proposed that we recognize Pyrope-Almandine and Pyrope-Spessartine as additional species of Garnets that are intermediate in composition between the two end-member species Pyrope and Spessartine. These Garnets would have graph points located along the mid-section of the line that joins two end members. GIA now classifies these two hybrids as distinct species, in addition to the 6 primary species of gem Garnets.

A Rainbow of Color in Garnets

Garnet Names Based on Color

The mixing of Garnets in infinite combinations makes the naming of Garnets species and color varieties difficult. A variety name based on color variation can represent a useful gemological distinction, but trade names are often created by gem dealers only to enhance or maximize the market value of a gem. In the marketplace, it is a free-for-all when it comes to trade names for Garnets, most of which are based on minor peculiarities of color. Gem dealers want to appeal to buyers by using attractive names like "Cranberry" Garnet (purple-red Rhodolite), "Champagne" Garnet (yellow-brown Andradite), "Mandarin" ﻿Garnet (dark orange Spessartine or dark orange Hessonite) and "Fanta" Garnet (light orange Spessartine of Hessonite).

Confusion arises when dealers fail to provide the correct variety name or even species name for Garnets that are sold with exclusive trade names created specifically for the seller. Understandably, most dealers simply don't have a means for correct identification of Garnet. However JTV has its own lab and does have the means, yet JTV  takes extraordinary liberties with nomenclature, trademarking many new names for Garnets such as Mpito Color Change Garnet from Kenya, Vermehlo Garnet (Pyrope-Amlmandine) from Mozambique, and Serengeti Spessartite Garnet from Tanzania, all touted as new and unusual discoveries.

Such tailor-made trade names are generally not used by gemologists. But a few trade names based on origin (such as Tsavorite and Mali Garnet) or unique color and appearance (such as Rhodolite and Color Change Garnet) have over time become widely ﻿accepted in gemology as useful variety names.

As we have shown, color alone is not a reliable parameter for identifying Garnets by species or variety. Due to the strong influence of trace chemistry, color does not necessarily predict primary composition. Conversely, primary composition often does not accurately predict color (or the phenomenon of color change). Similarly, absorption spectra as seen through a hand held spectroscope are often not reliable indicators of composition.

GIA doesn't classify Garnets by color variety at all, only by the primary species. All Garnet gems are composed of several end member species. Hanneman proposes we recognize 7 different hybrid species in addition to the 6 primary end member species of gem Garnet. Hybrid species names such as Pyrope-Almandine and Pyrope-Spessartine that have been adopted by GIA can be useful. But if start relying on hybrid names to classify intermediate Garnet species, then we would also need to introduce the triple hybrid species Pyrope-Almandine-Spessartine to adequately classify many Pyralspites such as Malaya Garnets that contain significant amounts of all 3 end members in that series.

Such a triple-hybrid system could end up quite confusing, as any particular Malaya, Rhodolite or Pastel Pyrope gem might be assigned to either the Pyrope-Almandine, Pyrope-Spessartine or Pyrope-Almandine-Spessartine hybrid species, depending upon the percentages of the end members in its composition.

Whether the exact boundaries between Pyralpsite species and varieties are determined by quantitative measurements of magnetic susceptibility and refractive index, or by visual appearance (or a combination of both), the distinctions we adopt can be quite arbitrary. There may be little difference in color or composition between a high Rhodolite and a low Almandine, and the difference between a red Malaya and a Standard Pyrope, or a Rhodolite and a purple Pastel Pyrope, may in some instances be just small a variation in the concentration of chromium/vanadium that results in a slightly altered appearance.

But gemologists must draw lines somewhere if we are to have any useful distinctions between the numerous variations in Garnet chemistry and color. The challenge is to arrive at a consensus as to which parameters are the most appropriate for separating and naming Garnets. When classifying gem Garnets by species, this researcher suggests we limit the nomenclature to the 6 primary gem Garnet end members species recognized by mineralogists. Among gemologists, we also feel there is a need to accurately assign variety names to address the diversity within Garnet species, particularly within Grossular, Pyrope and Andradite. Click on the link to view the Classification System that we advocate for species and varieties of gem Garnets.