The chemical formula for Almandine is shown below left. Ferrous iron (Fe2+) ions are located in the A site, shown in bold italics on the apex section of the Almandine Garnet composition graph below right. The chemical formula represents the pure form of Almandine, which is its end member form. That means, if only iron and aluminum are found in the A and B sites, the gem is pure Almandine. A pure Almandine gem would have a graph point located at the end of the line that runs from Pyope to Almandine, precisely at the apex of the Almandine trisection of the graph marked Al. However, all Garnets are hybrids of various Garnet species. Gem Almandines generally contain significant amounts of Pyrope, and Almandine graph points are never close to the pure apex point. Minor amounts of Spessartine and Andradite Garnet are also present.

Spessartine is one of the most sought-after Garnet gems due to its brilliance and bright color. Gemologists often refer to this species as Spessartite, but the Garnet species name given by mineralogists is Spessartine. Orange color is the rarest and most valuable Spessartine color, but red Spessartines are also desirable. Well-cut specimens of red Spessartine show more brilliance than red Almandines and red Pyropes. The colors of Spessartine range from light "fanta" orange to dark "mandarin" orange to orangey red to red.

Red and orangey-red Spessartines tend to mix with Almandine along the Sp-Al join, while orange and reddish orange gems tend to be in a solid solution series with Pyrope along the Py-Sp join. As you can see by graph point #14 below, Spessartine can contain up to 50% Almandine. The #14 point falls at the midpoint along the line between the Almandine end member and Spessartine end member (midpoint is indicated as .5). The #14 point has 50% of its A site occupied by iron and 50% by manganese.

The Pyrope and Almandine species are in continuous sold solution with each other. On the high end of the Standard Pyrope range shown above is a Standard Pyrope near the half-way mark (.5) of the join between Pyrope and Almandine. This Pyrope-Almandine gem (pictured below) has some purple color. The gem looks like Almandine Garnet, but it's primary component is Pyrope. This gem is 52% Pyrope, and 48% Almandine, and has an unusually high refractive index (RI 1.77) and magnetic susceptibility (SI 19.71) for Pyrope.

Pure Almandine gems are not known to exist in nature. Our study of Almandine shows that the average Almandine gem contains approximately 66% Almandine and 34% Pyrope Garnet (66% of site A is iron and 34% is magnesium,). But any particular Almandine gem will generally fall in the range of 50% to 75% Almandine, with 25-50% of the A site iron ions replaced by magnesium ions. Magnesium is magnetically inert (diamagnetic). The greater the replacement of magnesium by iron, the more magnetic Almandine becomes, and the further to the right toward the pure end-member its graph points plot.

The graph below shows actual plot points for 27 Almadnine Garnets that come from around the world, from the North America to Africa to India. Notice that Almandine graph points never reach the pure end member at the upper right apex. Point # 10 shown on the graph represents the round Grape Garnet gem (Orissa Almandine) pictured above left.

Exceptionally purple Almandine with the trade name Grape Garnet comes from the state of Orissa, India. A dichroic purple Almandine showing two colors has also been recently mined in the state of Tocantins, Brazil. Grape Garnets and Tocantins Garnets both show color change from purple in daylight to pink in incandescent light. These purple Almandines can be very similar in color to Rhodolite Garnet, which belongs to a different species. Gem dealers and gemologists often refer to purple Almandines as Rhodolites. It is our view that the term Rhodolite should not be used to describe all Garnets with purple color, but should be restricted to the purple variety of Pyrope Garnet for which it was originally intended, and which has its own distinct range of chemical composition.

Almandine is the most common gem Garnet. Most gems have a dark purplish red or reddish purple color (due to Fe2+ iron), but some gems may appear pure red (possibly due to additional chromium content). All have a high concentration of ferrous iron (Fe2+) as the distinguishing feature. An uncommon phenomenon in Almandine is asterism due to rutile needles. Such Almandines are given the trade name Star Garnet (shown below right). Star Almandine is the state gem of Idaho, and is also found in Sri Lanka, India and African nations.

The gems that gemologists commonly refer to as Pyrope actually represent just one of six different varieties of Pyrope: 1) Standard Pyrope, 2) Chrome Pyrope, 3) Rhodolite Garnet, 4) Malaya Garnet, 5) Color Change Pyrope, and 6) Pastel Pyrope. In addition, dense rutile inclusions in Pyrope can result in the phenomenon of asterism in Star Pyrope Garnet from Sri Lanka, as identified in this study. Very rare Cat's Eye Pyrope has also been found in Sri Lanka. Both of these phenomenal gems that we tested have Standard Pyrope composition.

For example, let's pretend that the length of the Pyrope-Almandine boundary in the graph above is 100 mm long. The high point shown farthest to the right on the graph above is 73% Almandine and 27% Pyrope. Its graph point would be measured at 73 mm to the right of Pyrope, because it is 73% of the total length of the line between pure Pyrope and pure Almandine. The low Almandine, the far left point shown above, would be located 50 mm along the boundary, the half-way point, indicating it is 50% Pyrope and 50% Almandine. 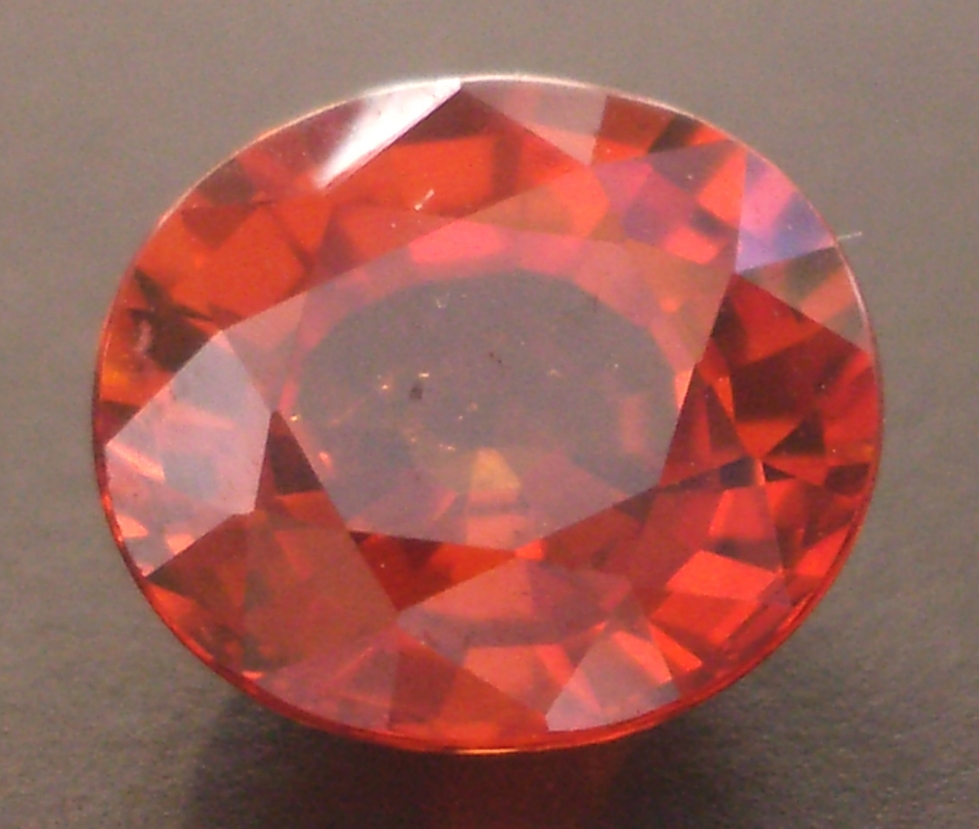 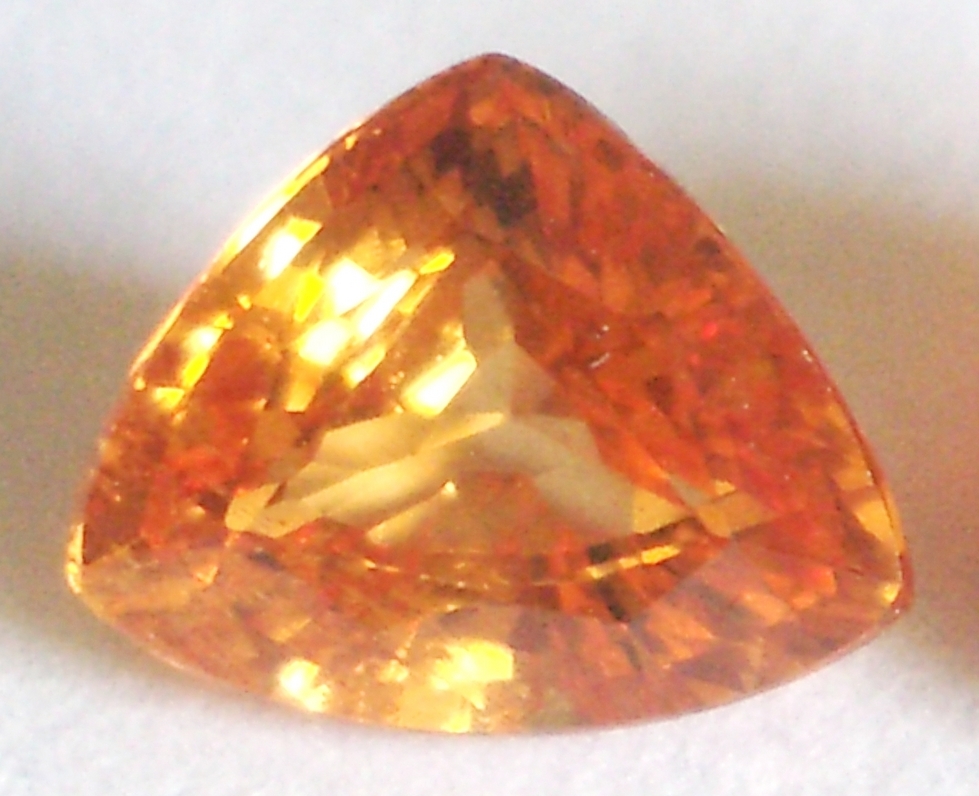 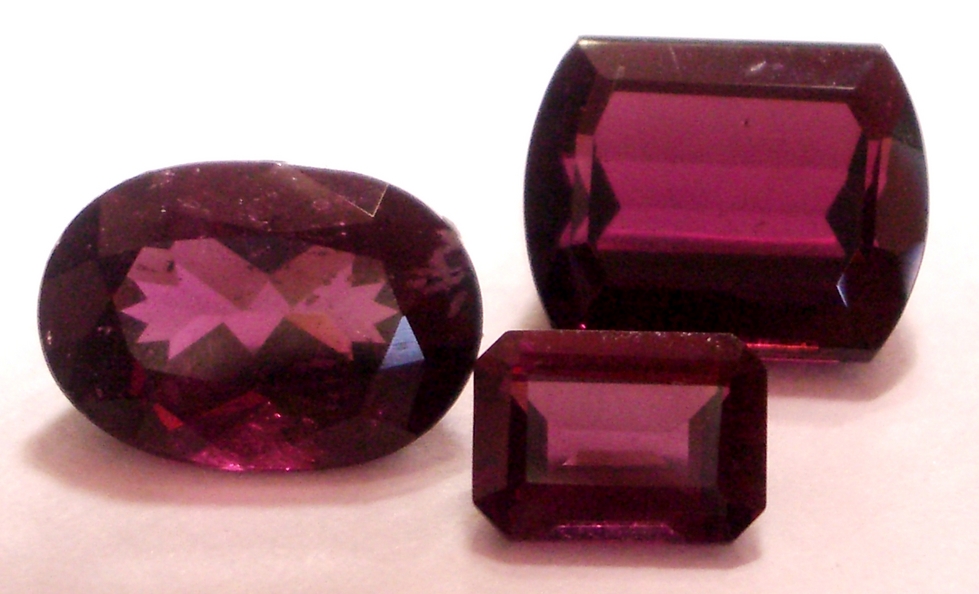 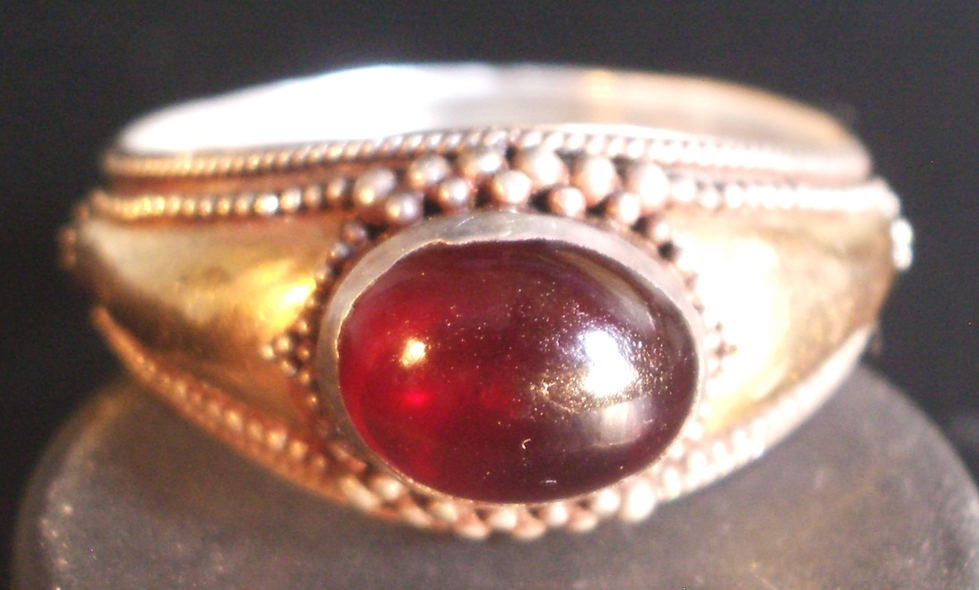 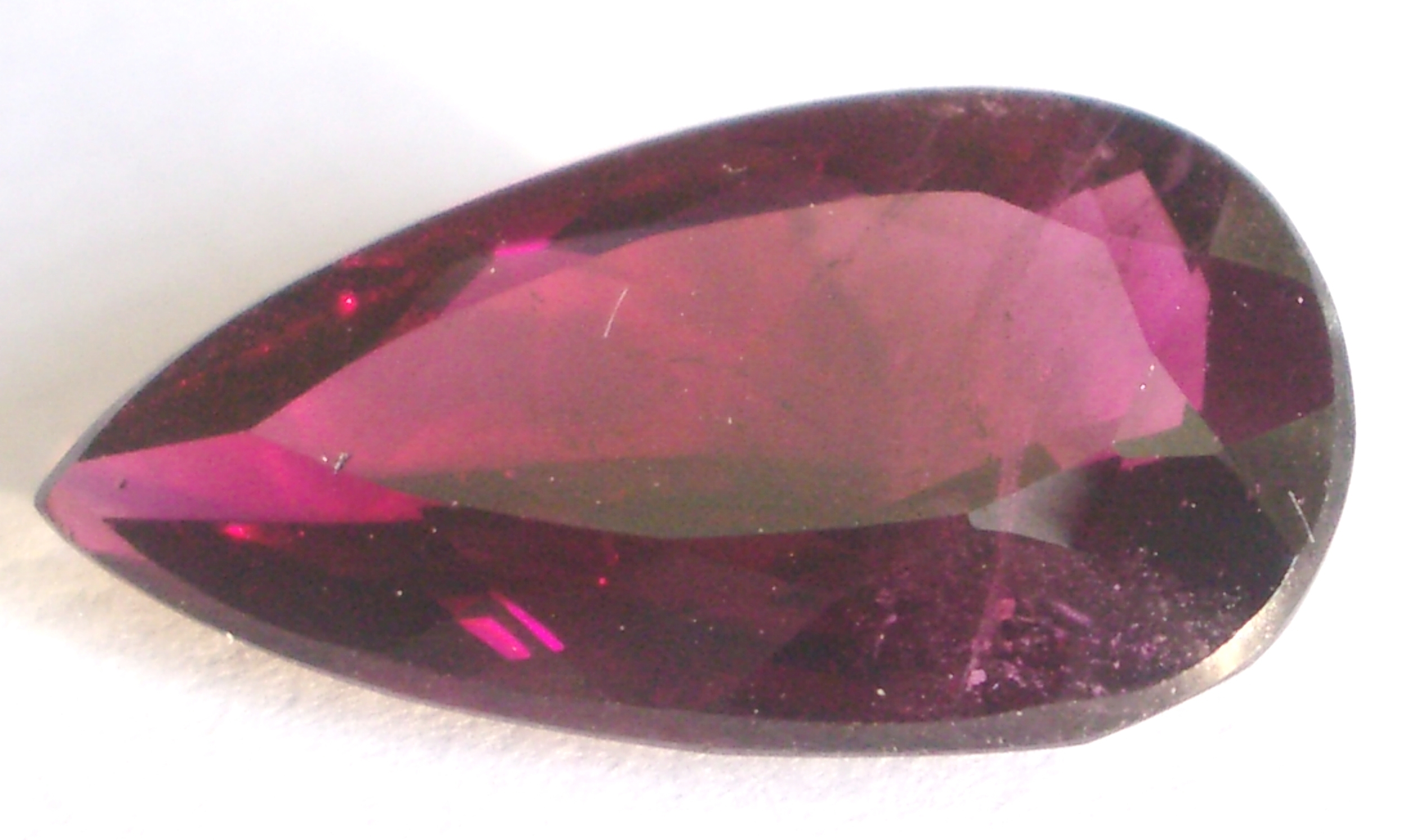 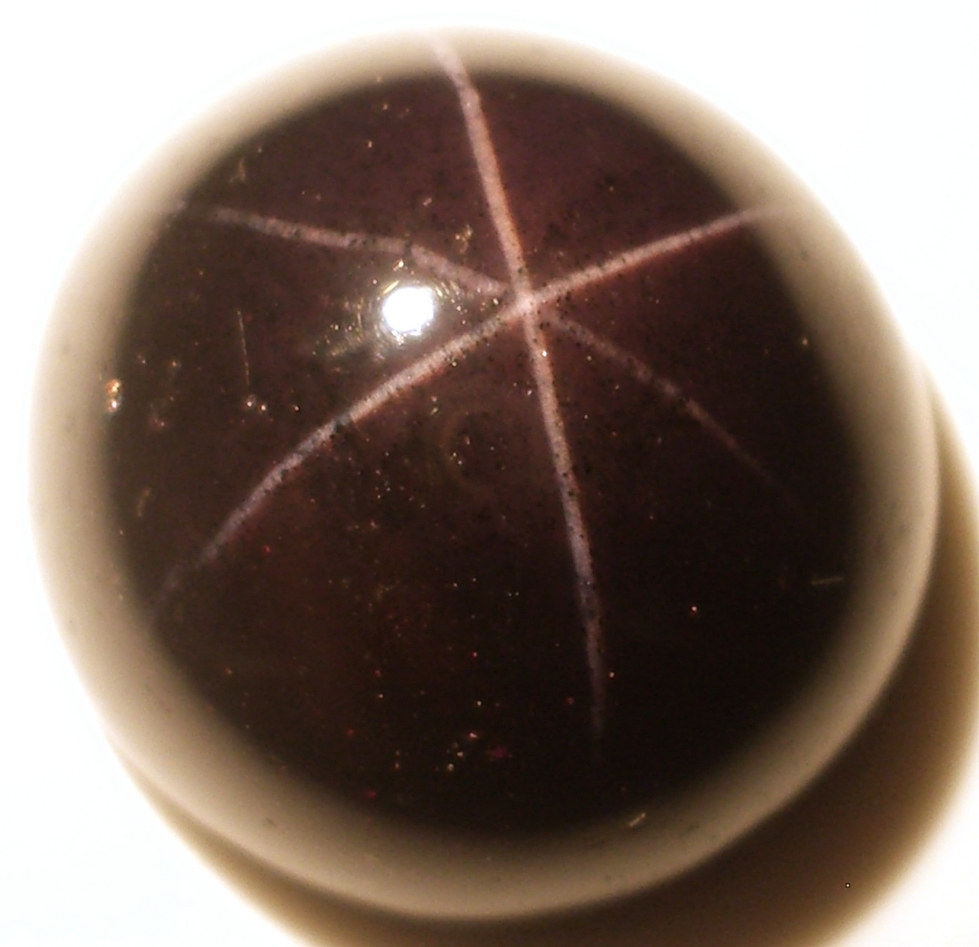 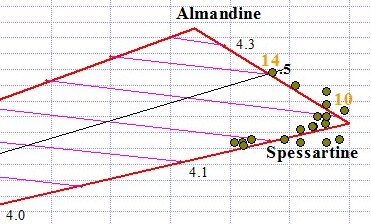 The Almandine species as a whole shows little variation in color, and there are no gem varieties within the Almandine species, only Almandine. The fact that color intensity of Almandine remains relatively constant regardless of the concentration of iron suggests that color may also be influenced by a charge transfer process such as iron to iron (Fe2+-Fe3+). In addition, intervalence charge transfer involving titanium ions (Fe2+-Ti4+) might also influence color﻿ toward darker tones (Hoover, pers. comm. 2012).

The RIMS graph below shows 68 Standard Pyrope Graph points on the Pyralspite ternary. As with Almandine,  color and composition are fairly consistent. Standard Pyrope graph points hug the Pyrope-Almandine join at around 75% Pyrope. The refractive index range we found for Standard Pyrope is RI 1.745-1.77, and the magnetic susceptibility range we measured is SI 11.67-19.71.

Orange color in Spessartine is due to manganese (Mn2+ and possibly charge transfer processes involving Mn2+). Red Spessartine has orange color from manganese in conjunction with red color from iron (Fe2+ in Almandine). These two metallic chromophores, manganese and iron, are the cause of nearly all the measurable magnetic susceptibility seen among all Pyralspite Garnets.

The only thing that makes pure Spessartine chemically different from pure Almandine is that manganese occupies the A site of it's chemical formula instead of iron. Red Spessartine can at times be difficult to distinguish from red Almandine with the naked eye, but only red Spessartine is over the limit (OTL) of measurable refractive index. Magnetic susceptibility measurements (SI) ﻿also easily separate the two.

"Pyr" is the Greek word for fire, alluding to the fire-red color for which this Garnet species is known. The pure red to orange-red appearance is due to minor amounts of chromium in addition to iron. Pyrope gems can sometimes be indistinguishable in appearance from Ruby gems, which are also colored by chromium and iron. Since there are a number of varieties of Pyrope, we will refer to typical red and orange-red Pyrope gems as Standard Pyrope. Most Standard Pyropes have much lower RI's than Almandines. They contain an average of 74% Pyrope and 26% Almandine. Pick-up responses tend to have lower strength relative to Almandine.