When testing Garnets, we can accurately determine the major composition of individual gems by graphing refractive index and magnetic measurements on solid solution ternary diagrams much like those we show for Tourmalines (see page 1 of Garnets for a Garnet diagram). For a variety of reasons, this method of determining composition is not well-suited to Elbaite and most other Tourmaline species. But we might expect that the compositions of most gem Tourmalines would fall somewhere within the Elbaite-Schorl-Dravite ternary or the Elbaite-Schorl-Tsilaisite ternary. At the present time, the best we can do is to show the measured magnetic susceptibility of each individual Elbaite gem on a bar graph.

Tourmaline is a diverse mineral group composed of 32 species currently known to mineralogists (Henry, D.J. et. al., 2011). Small variations in chemical composition account for the multitude of species. Most gem-quality Tourmalines belong to only 2 species, Elbaite and to a lesser extent Dravite. Both species are allochromatic and transparent. Color varieties and trade names of Elbaite gems include green "Verdelite", red "Rubellite", blue "Indicolite", pink Tourmaline and yellow "Canary" Tourmaline. Brown gems often belong to the Dravite species, as well as green Chrome Tourmalines. Black color in Tourmaline gems is typical of Schorl, an opaque idiochromatic species. The metal ions that cause color in any particular Tourmaline gem can only be determined by advanced lab tests such as microprobe analysis or laser ablation. However, specific colors have been found by researchers to be indicative of specific metal ions and intervalence charge transfer processes.

The bar graph below shows the magnetic susceptibility (degree of magnetic attraction) of different Tourmaline color varieties in relation to one another. Each column of dots represents a color variety, presented from least magnetic to most magnetic. Dot colors are representative of gem colors, and each dot represents an individual gem's measured magnetism in terms of volume magnetic susceptibility noted as SI (International System of Units) X 10(-6). The SI values range from less than zero (< 0 SI, Diamagnetic response) to SI 547 (Drag response) for transparent gems, and from SI 773 (Drag response) to SI 990 (Drag response) for opaque gems. Gems with mixed colors are not represented on this graph.

All Tourmalines tested for this study had refractive indices in the range of 1.61-1.645, with the exception of iron-rich Schorl, which had a higher refractive index range of 1.63-1.67. Elbaite chemically mixes with other Tourmaline species such as Schorl, Tsilaiste, Liddicoatite and Rossmanite in what are referred to as solid solution series (see table below). Gems that are primarily Liddicoatite can appear identical to Elbaite gems. Dravite is in solid solution with Uvite, and many Dravite gems are a mixture of Uvite and Dravite.

The Chromophores for 3 Idiochromatic Species are Highlighted in Red.

Because different Tourmaline species have overlapping refractive indices, densities and magnetic susceptibilities, they cannot be definitively separated from one another using standard gemological tools. More advanced lab analysis such as Raman spectroscopy is needed to separate Tourmalines by species based on their chemical compositions. For this reason, our study of Tourmalines separates gems primarily by color rather than by species. Our assumption is that most faceted gem-quality Tourmalines are Elbaite, most Chrome Tourmalines and most brown/orange gems are Dravite, and most opaque black gems are Schorl.

The table of ternaries (triangles) below illustrates some of the many possible solid solution series among gem Tourmalines. The dotted line represents the Schorl-Tsilaisite solid solution. Vanadium-Dravite and Rossmanite species are not included on the table.

Tourmaline gems often contain high concentrations of iron and/or manganese, and they are the most magnetic of all natural transparent gemstones that are allochromatic (colored by impurities). In contrast, idiochromatic Garnets are far more magnetic. For our study of magnetism, we examined over 165 Tourmaline gems in a wide range of colors and shades. The findings presented here include magnetic responses to a magnet as well as magnetic susceptibility measurements taken for each Tourmaline using a Hoover balance.

Uvite: The Uvite Tourmaline species often contains inclusions and is rarely faceted into gemstones. Uvite intermixes with the Dravite species, and the two species cannot be individually identified or separated without advanced testing. According to the sellers of the the two red Brazilian Tourmalines shown below, these gems are from deposits known to be Uvite. Both gems are strongly magnetic due to iron (Fe2+) derived from mixing with Schorl.

Tourmaline species mix with each other in the same way that Garnet species do. Even though Elbaite Tourmaline is considered to be allochromatic, it might be more instructive to describe this gem species as partly allochromatic and partly idiochromatic, as are Grossular Garnet, Pyrope Garnet and even Peridot. As the diagram above shows, Elbaite gems (with the exception of copper-bearing Elbaite) technically do not derive color and magnetism from impurities as do most allochromatic gems. Elbaite gems derive color and magnetism by mixing with idiochromatic Tourmaline species that contain transition metals in their native chemistry. The blue color in the Elbaite Tourmaline below ("Indicolite" variety) is not caused by impurities of iron, but instead by iron derived from mixing with Schorl Tourmaline. 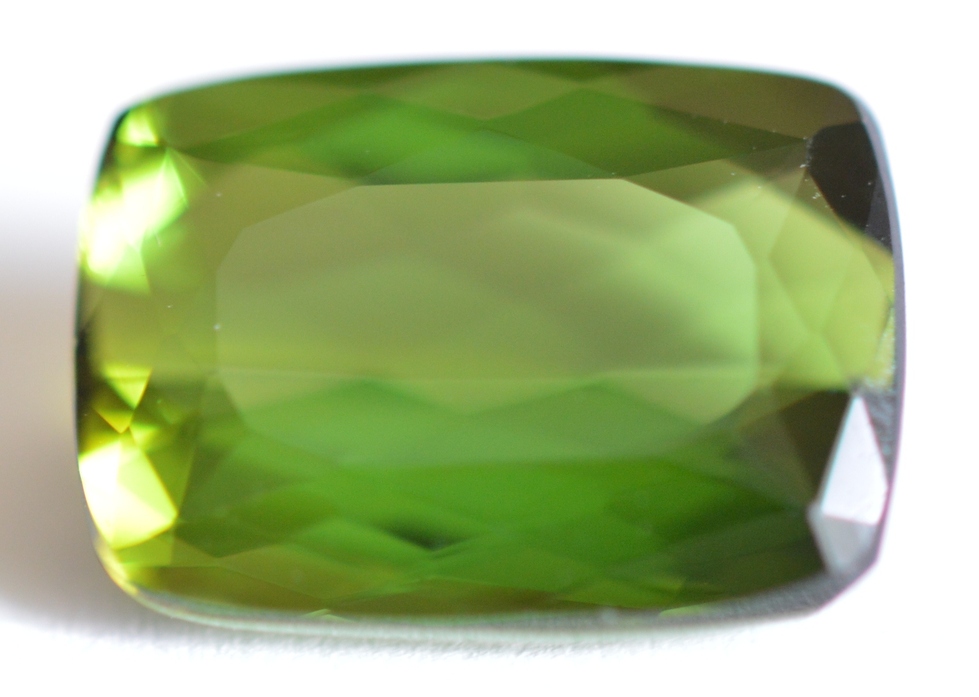 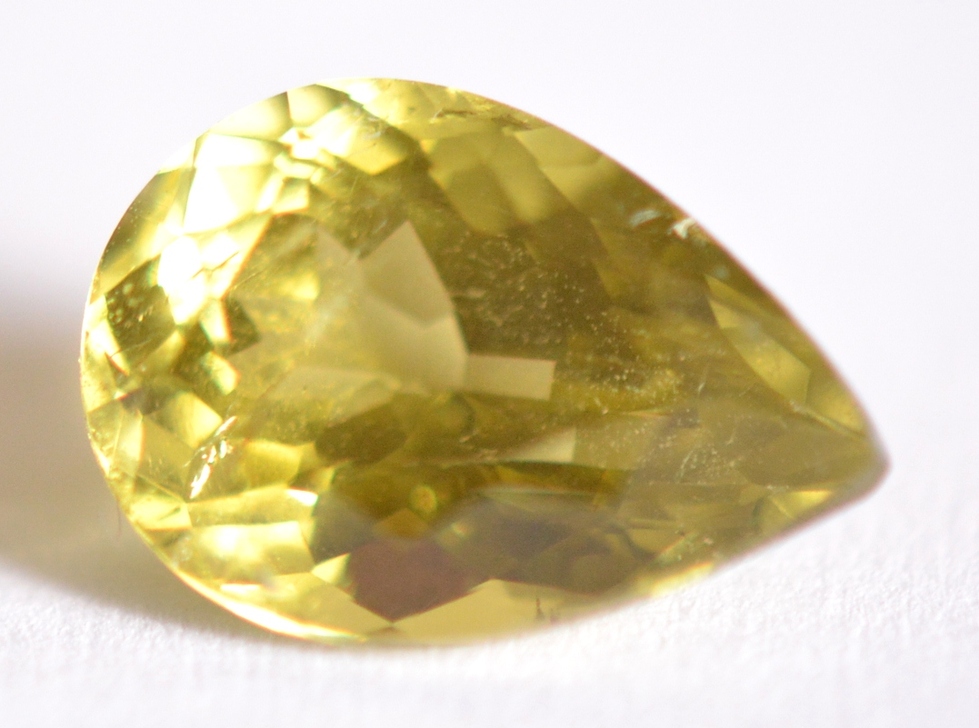 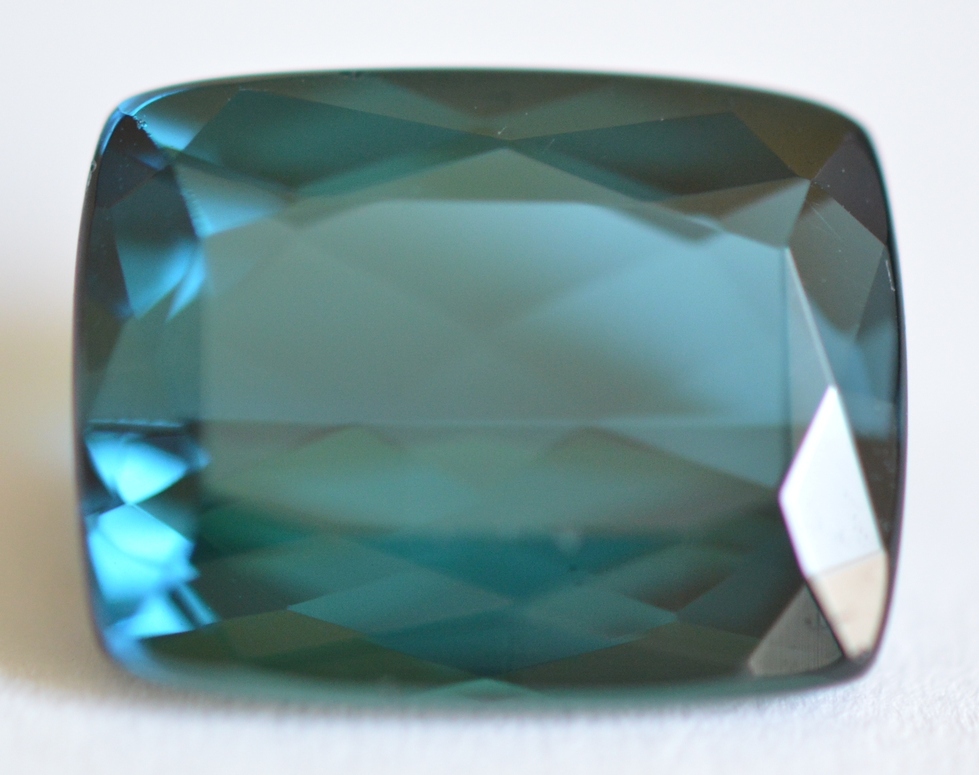 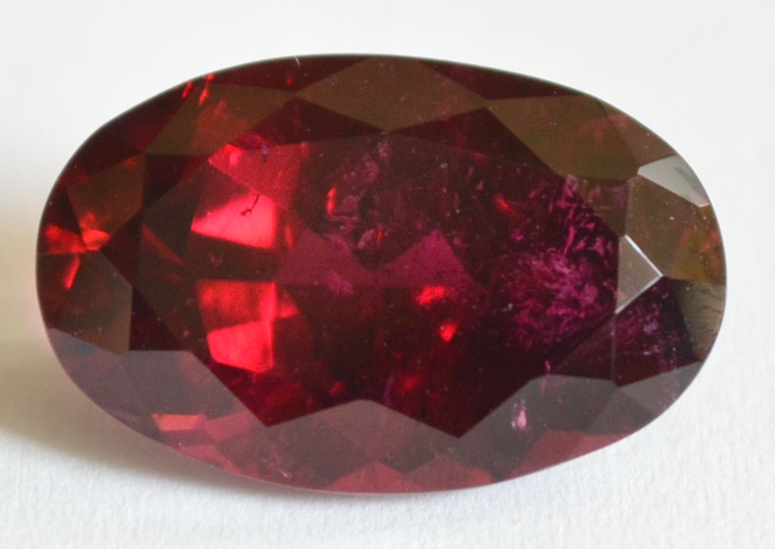 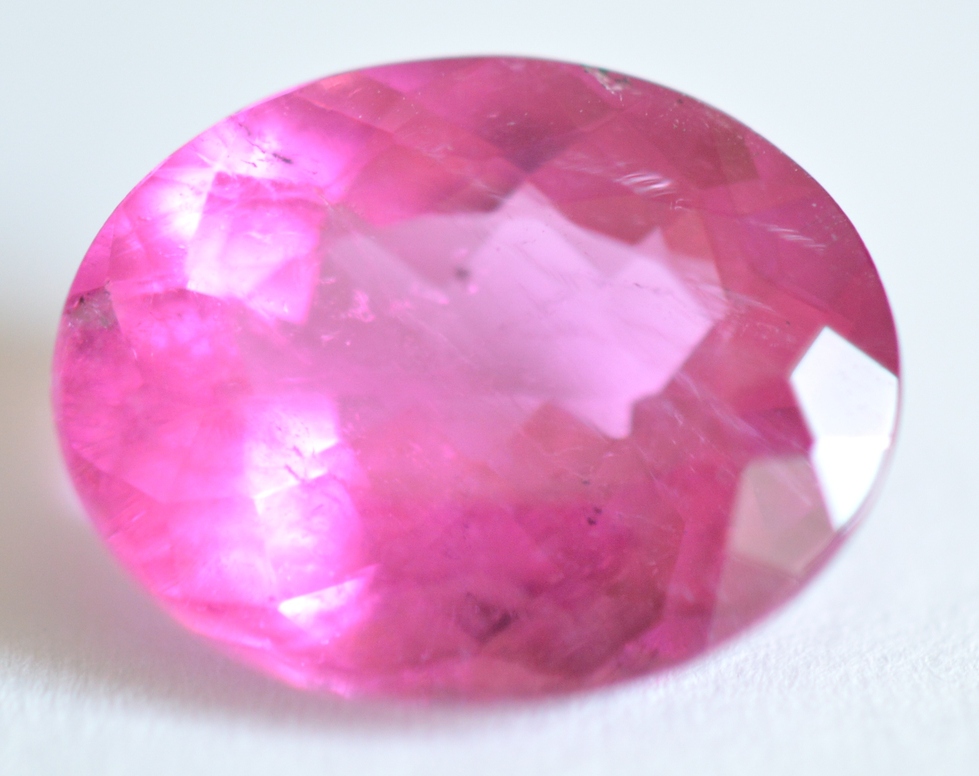 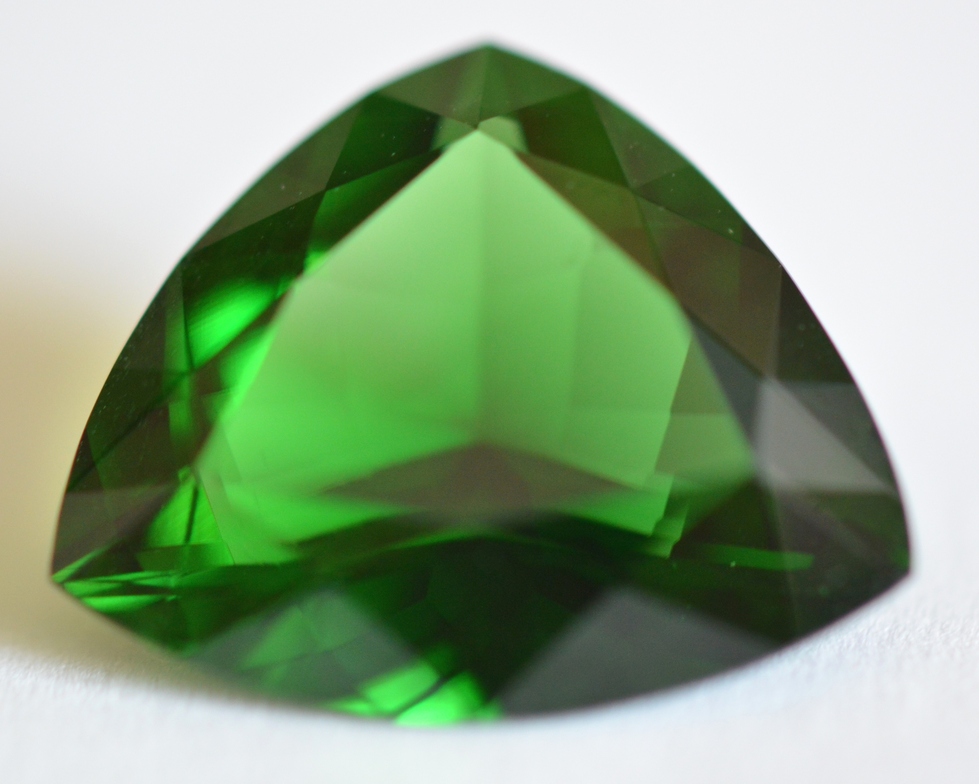 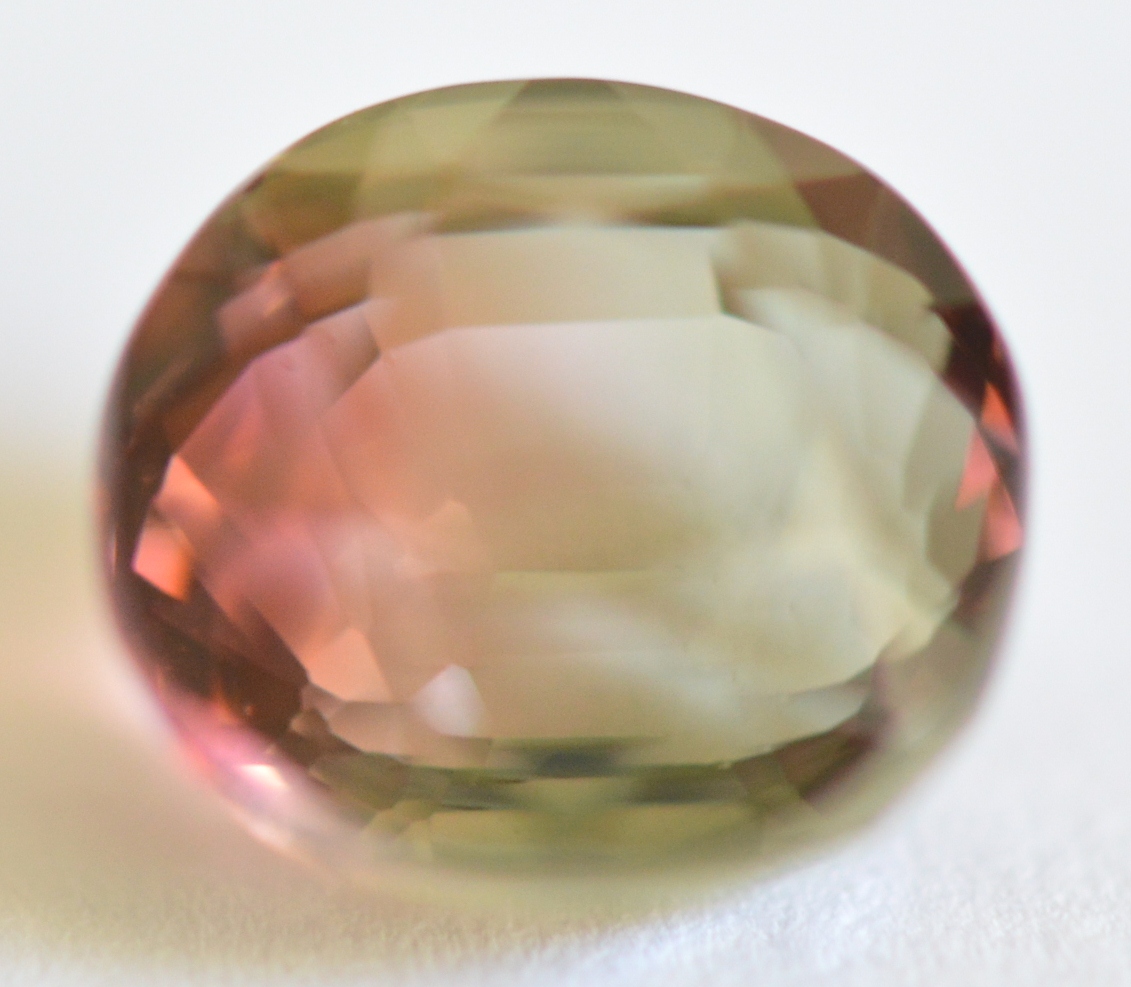 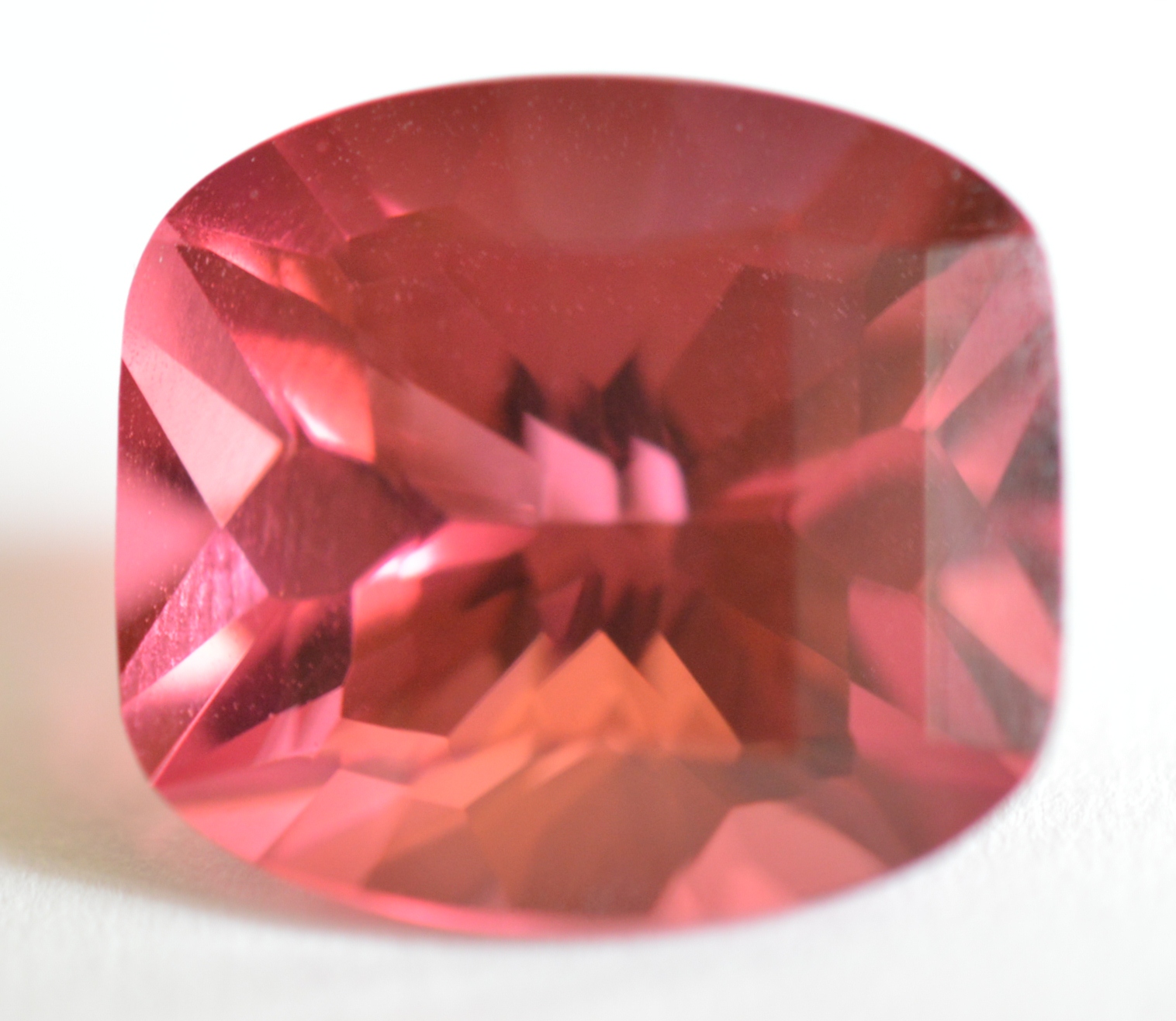 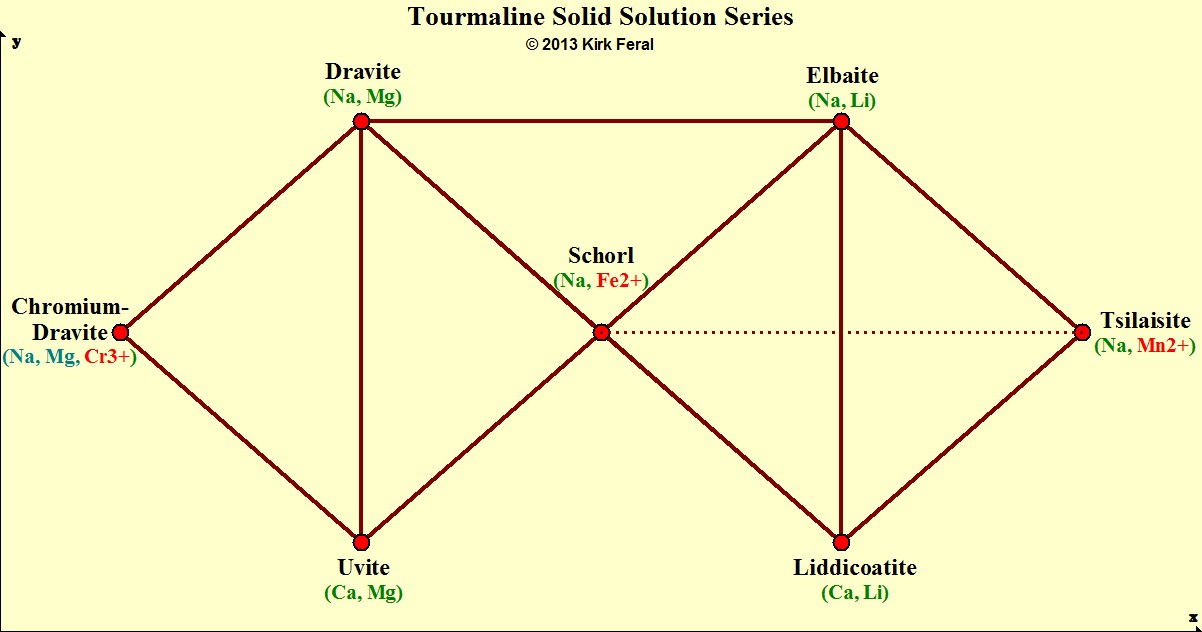 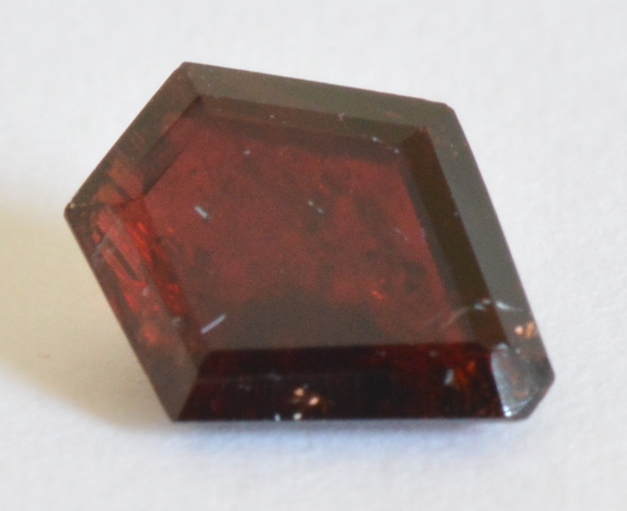 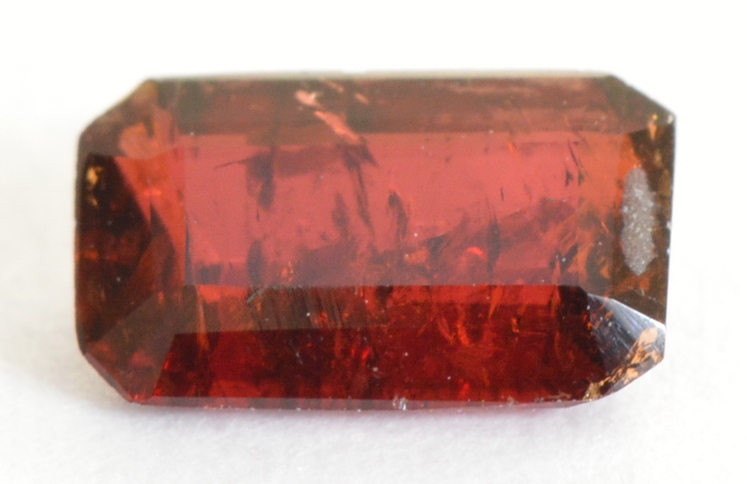 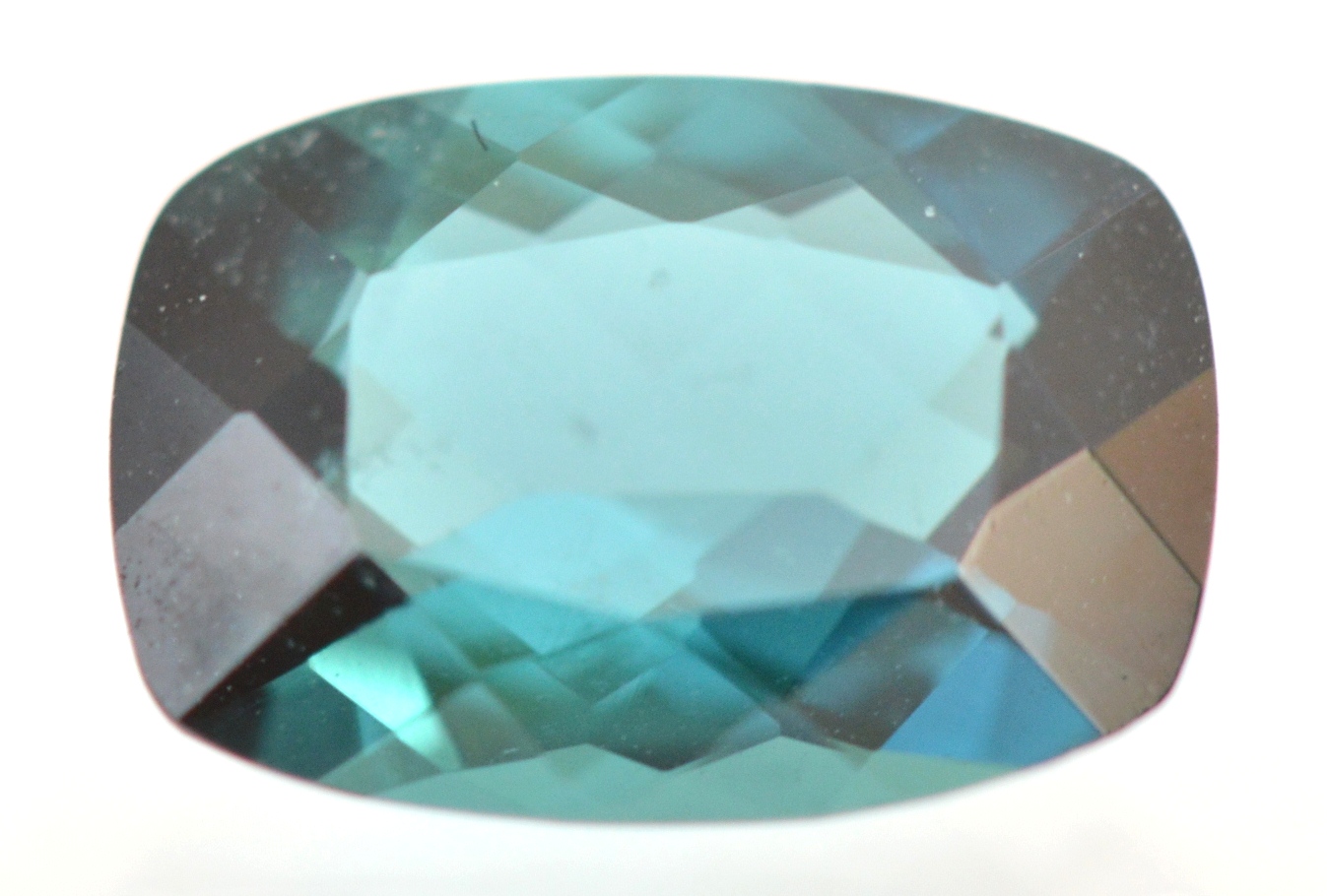 Information about causes of Tourmaline color was resourced from Dr. George Rossman's CalTech web page on Tourmaline spectroscopy, as well as our own analyses using a spectrometer. The causes of color in Tourmalines can be complex and subtle, and remain only partially understood by researchers.

Uvite Tourmaline also mixes with the Vanadium-Dravite and Chromium-Dravite species. According to the seller of the highly included green Tourmaline rough crystal shown below, this specimen is green Uvite from Burma.

Using spectroscopy, fluorescence, Chelsea filter testing and magnetic testing, it appears that the coloring agent in this green Tourmaline crystal is primarily vanadium, with some chromium. This Uvite above ﻿does not fluoresce under longwave UV light, but it does fluoresce weak yellow under shortwave light. This Uvite crystal is diamagnetic.