Green: Green and yellowish green Paraiba color may be due to a combination of yellow color from manganese (Mn2+ and Mn2+-Ti4+ charge transfer) and blue color from copper (Merkel & Breeding, 2009). Iron is present only in trace amounts, but it has been suggested that green color in Paraibas may also be partly due to traces of iron involved in iron to titanium (Fe2+-Ti4+) charge transfer (Laurs, et. al., 2008). Green Paraibas tend to have higher concentrations of manganese than Paraibas of other colors, and consequently green Paraibas as a whole show the strongest magnetic attraction. The medium green gems pictured below both show a Drag response, and the gem on the left has the highest magnetic susceptibility of any Paraiba Tourmaline tested for this study.

Elbaite Tourmalines whose colors are influenced by copper impurities are referred to in the trade as Paraiba Tourmalines, cuprian Tourmalines or copper-bearing Tourmalines. Copper imparts blue color. Paraibas are rare. They were discovered in the state of Paraiba, Brazil in 1987, but since 2001 they have also been mined in Nigeria and Mozambique.

Blue: Copper imparts the blue color that is associated with Paraiba Tourmalines. Pure blue Paraibas are colored entirely by copper ions, which exist in concentrations too low to be magnetically detectable. Color intensities range from pale blue to deep blue. Pure blue is often modified to greenish blue or "aqua" blue by the presence of manganese (Mn2+). The presence of Mn3+ can lead to pink or red zoning within the blue body. These gems show magnetic responses that range from inert to strong depending on the concentration of manganese (Mn2+). Blue Paraiba gems that are inert (diamagnetic, SI <0) have an extremely low and magnetically undetectable concentration of manganese. An Inert response by any blue Tourmaline can be considered diagnostic for Paraiba Tourmaline colored entirely by copper. The strongly magnetic gem pictured below owes all of its blue color to copper and and all of its strong magnetism to manganese (Mn2+).

The graph below shows the measured magnetic susceptibilities of 25 copper-bearing Tourmalines tested in this study. Each column of dots represents a color variety: blue, purple & violet, and green. Each individual colored dot represents a single gem.

Magnetic testing cannot be used to separate medium green to dark green Paraibas from medium to dark green "Verdelite" Tourmalines colored by iron, as both types can show a Drag response and have similar magnetic susceptibilities.

​​This concludes our discussion of magnetism in Tourmalines. For a comprehensive look at magnetism in the Garnet Group,  which is even more diverse than Tourmaline, see our 12 page report on Garnets.

The amount of copper impurities in allochromatic Paraiba Tourmalines can be very small. Researchers have found that copper oxide concentrations as low as 0.15% by weight are found in purple and violet copper-bearing Tourmalines from Mozambique, while higher concentrations are found in blue stones from Paraiba, Brazil ranging from 0.4% in light blue stones to 2.5% in dark blue stones. At these levels, copper in Paraiba Tourmalines cannot be detected with a magnet, as copper oxides are 30 times less paramagnetic than iron oxides. Copper ions (Cu2+) have only one unpaired electron, and therefore induce very low magnetic susceptibilities.

Paraiba Tourmaline gem colors include blue, green and violet. Copper-bearing Tourmalines with pink, red or purple colors are not classified by gemologists as Paraiba-type Tourmalines. Paraiba Tourmalines typically have “neon” colors that are brighter than we find in Tourmalines without copper. The "neon" brightness of Paraibas may be caused by manganese (Mn2+, yellow-green color) brightening the color induced by copper (Cu2+, blue color). Lab-created synthetic blue Spinels, which are colored blue by cobalt, often contain traces of manganese that apparently brighten the color and modify the color to an "aqua" or blue-green hue. A similar effect can be seen in natural bright blue Apatite gems, which derive blue color from rare earth metals, and also contain traces of manganese.

Violet and Purple: Violet and purple colors in copper-bearing Tourmaline result from a combination of pink color from manganese (Mn3+) and blue color from copper (Cu2+). Manganese in the valence state of Mn2+ is also present in significant concentrations, as evidenced by the strong magnetic response of the violet pear shown below. Cryptic manganese (Mn2+) ions can be responsible for strong magnetic susceptibilities without contributing yellow color. Heat treatment is routinely applied to violet, purple, pink and red and copper-bearing Tourmalines to drive out pink color caused by Mn3+ (Abduriyim et. al., 2006), leaving only colorless Mn2+ and the desired blue color caused by copper. Heat changes the valence state of manganese from Mn3+ (pink) to Mn2+ (colorless, cryptic).

The purple gem below shows brown striated inclusions that are common in copper-bearing Tourmalines from Nigeria and Mozambique. It has been reported that these inclusions are iron oxides (Hematite) which stain the inner walls of growth tubes. Most probably, the thin layers of oxides do not contribute to detectable magnetic susceptibility.

Pink and Red: Tourmalines that are pink or red in color and contain traces of copper are also technically not classified as Paraiba-type, although they are sometimes sold as Paraibas. The concentration of copper in these gems is necessarily very low compared to true Paraiba gems, particularly compared to blue and green gems. Any significant concentration of Cu2+ would contribute blue color, imparting a visible purple hue to pink/red gems. When Tourmalines are pure pink and pure red, color is entirely due to manganese (Mn3+) rather than copper (Cu2+). These gems are best referred to as pink Tourmalines and "Rubellite". As we showed on the previous page, pink Tourmalines and "Rubellite" are diamagnetic to moderately magnetic. The three gems pictured below were sold as Paraiba Tourmaline or copper-bearing Tourmaline, but no traces of copper can be detected in any of these gems with a spectrometer.

In idiochromatic gems such as blue Turquoise, copper induces weak to moderate magnetic attraction because copper within copper salts is in high concentrations (about 6% by weight). However, the strong magnetic attraction we often find in allochromatic Paraiba Tourmalines is due entirely to manganese. In Paraiba gems, manganese is frequently present in much higher concentrations than copper (up to 6% manganese oxide by weight). Iron is found only as a trace element in Paraiba Tourmalines, and such an extremely low level of iron is not magnetically detectable.

Some red Tourmalines can have a subtle purplish hue that is due manganese (Mn+) plus a very small amount of copper, and these can legitimately be referred to as copper-bearing Tourmalines, although they are not considered true Paraiba-type. Purplish-red Tourmalines from Mozambique and Nigeria are often heated to remove the red color completely, leaving a light blue color that is the result of a very low concentration of copper. Although the remaining blue color may appear pale and washed-out, these previously-red Tourmalines are offered by retailers at high prices as Paraiba Tourmalines. 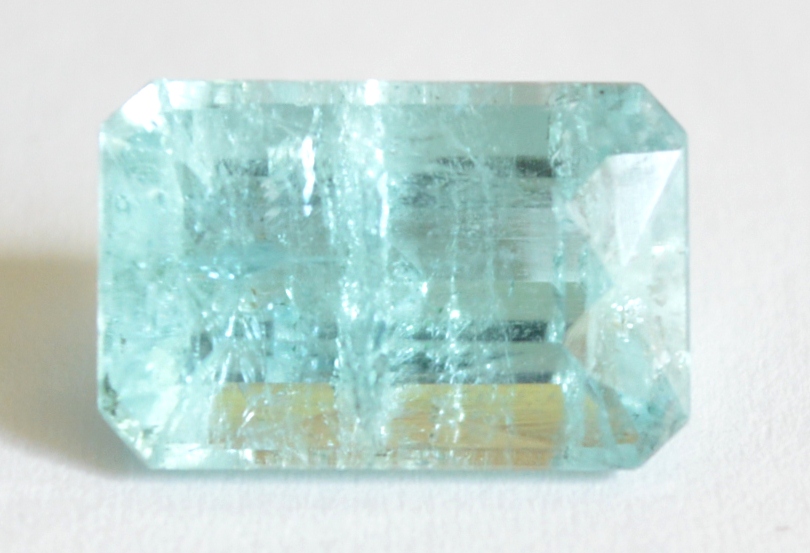 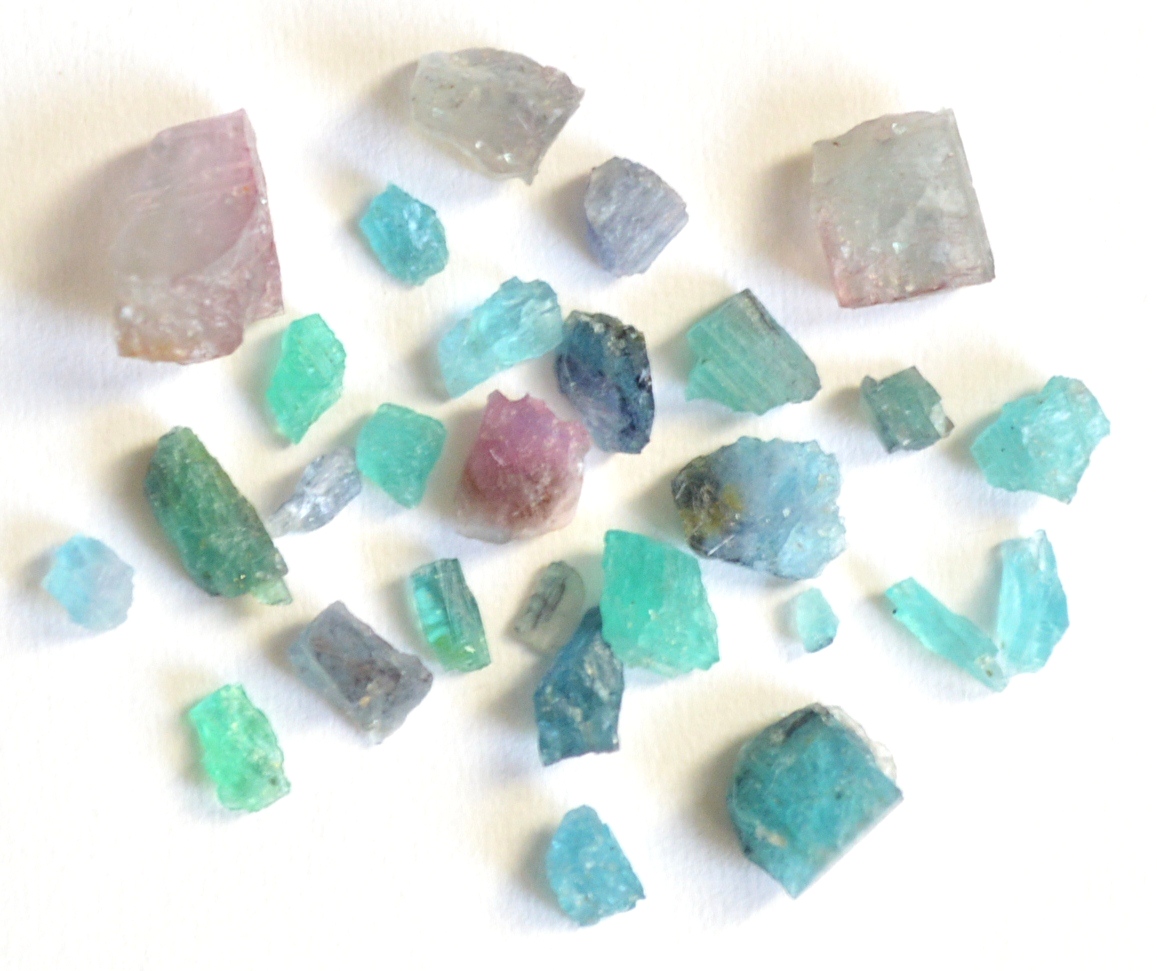 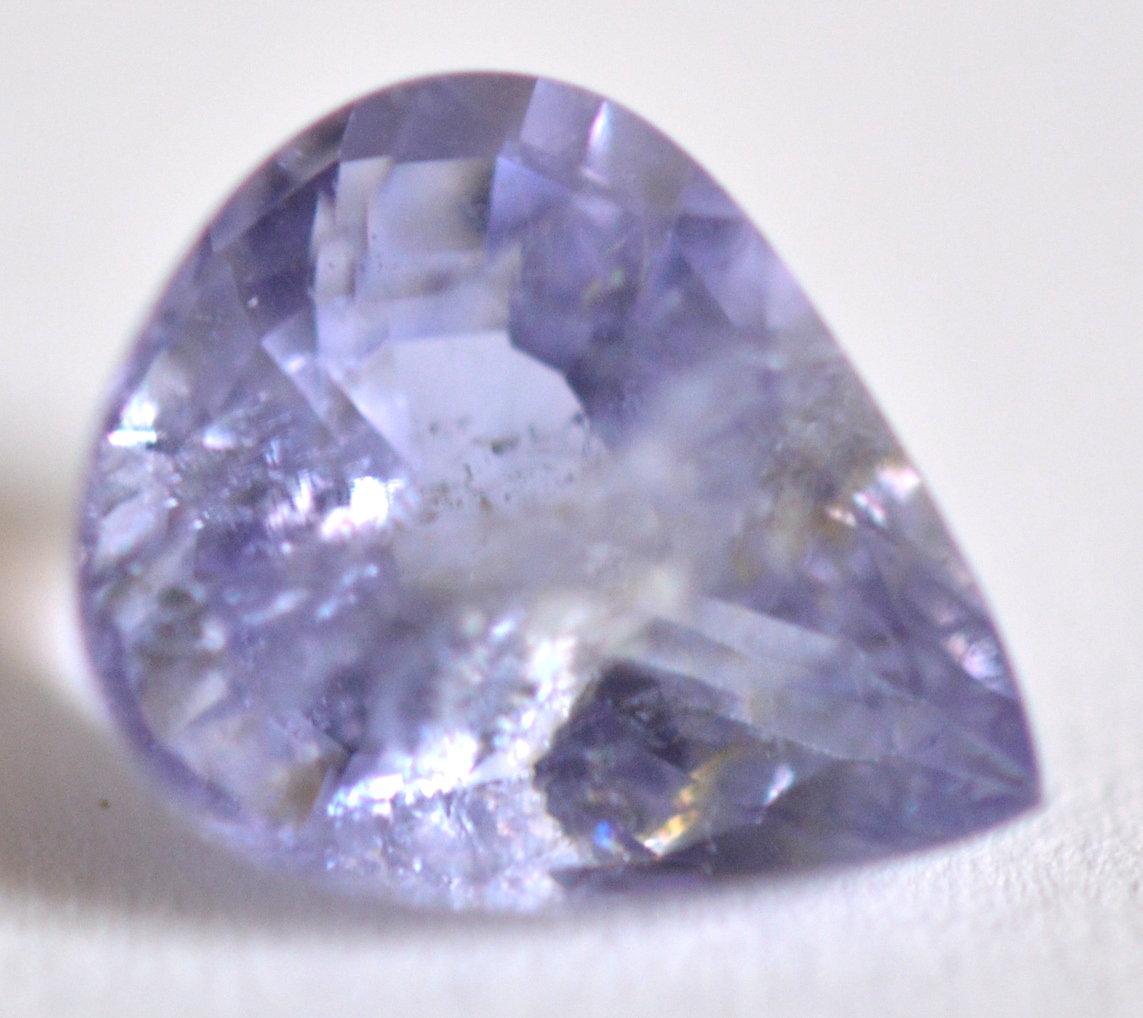 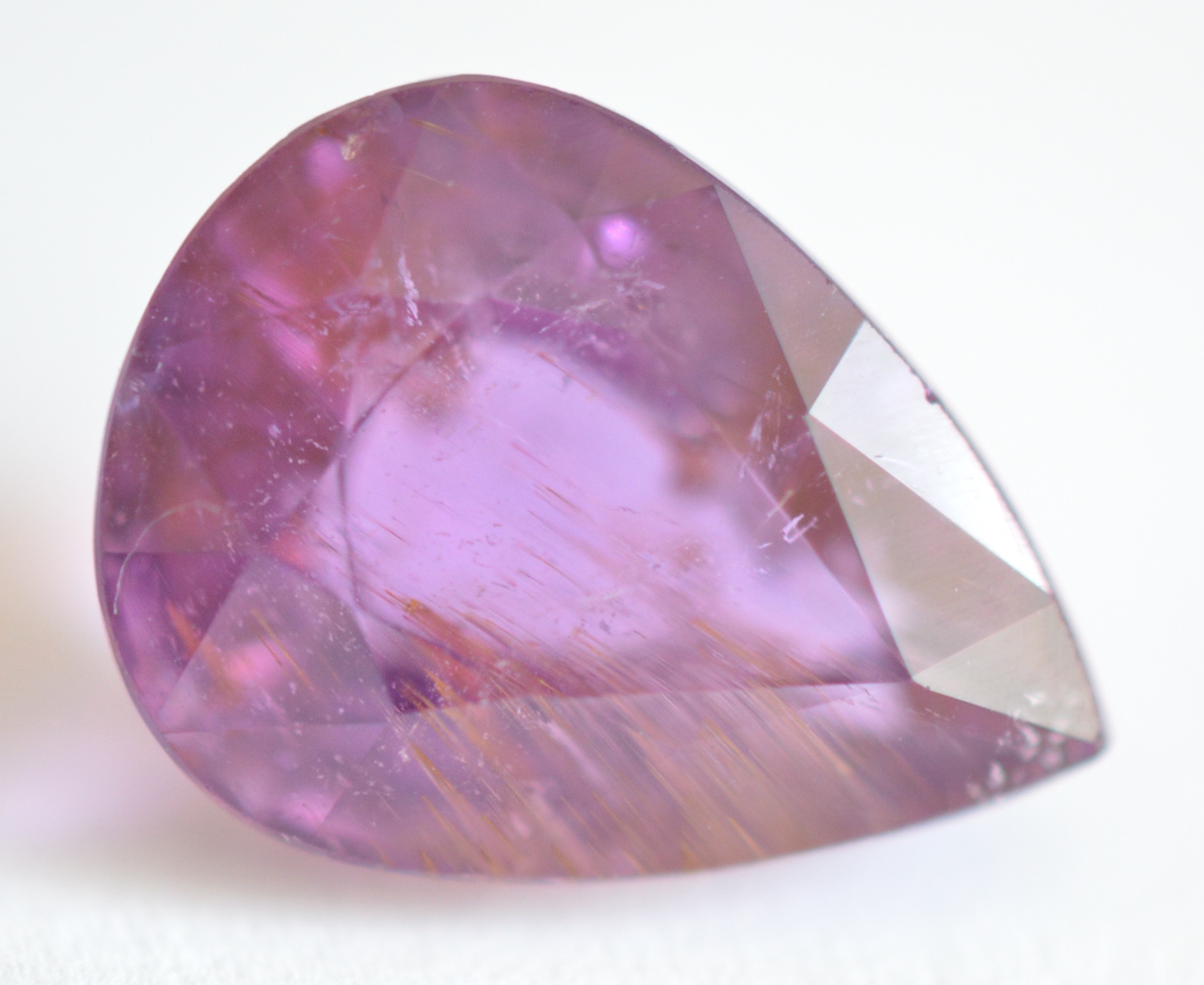 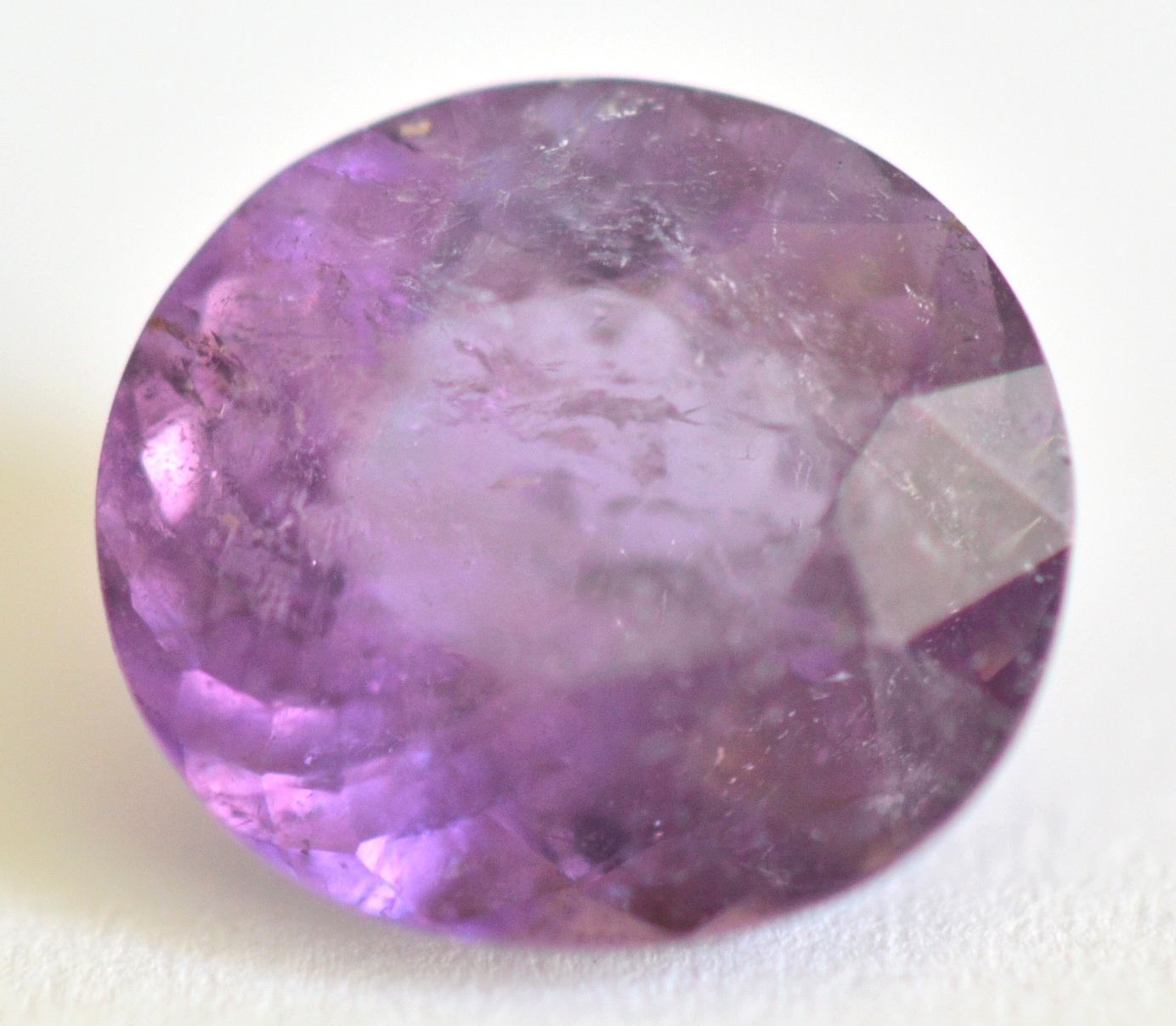 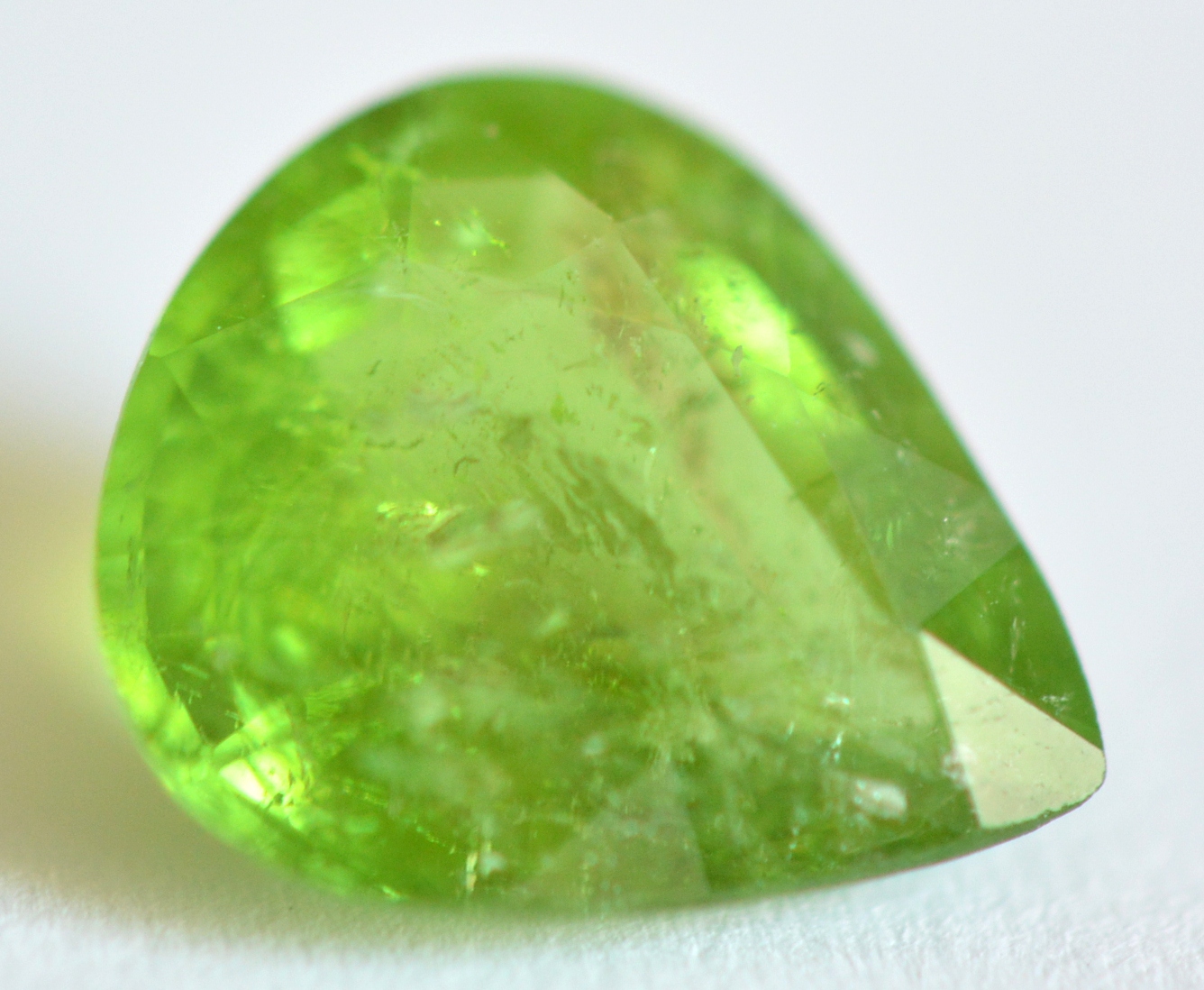 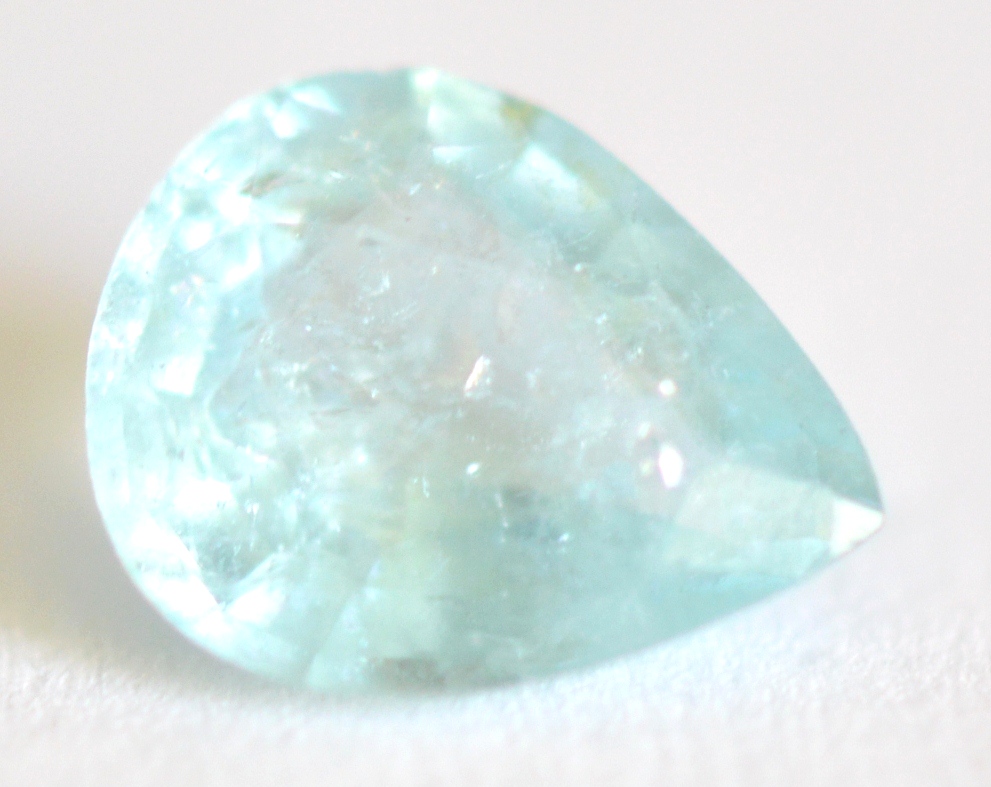 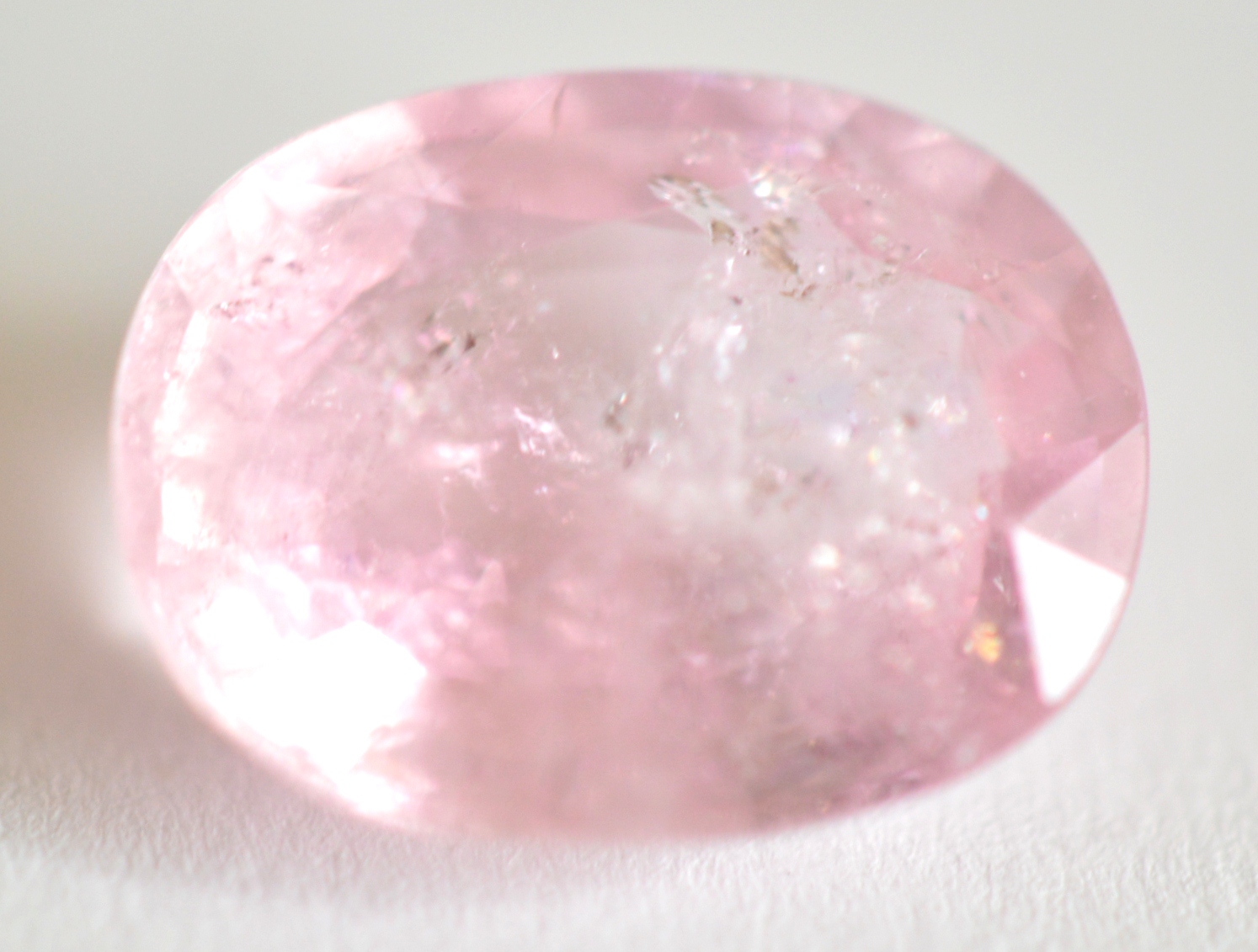 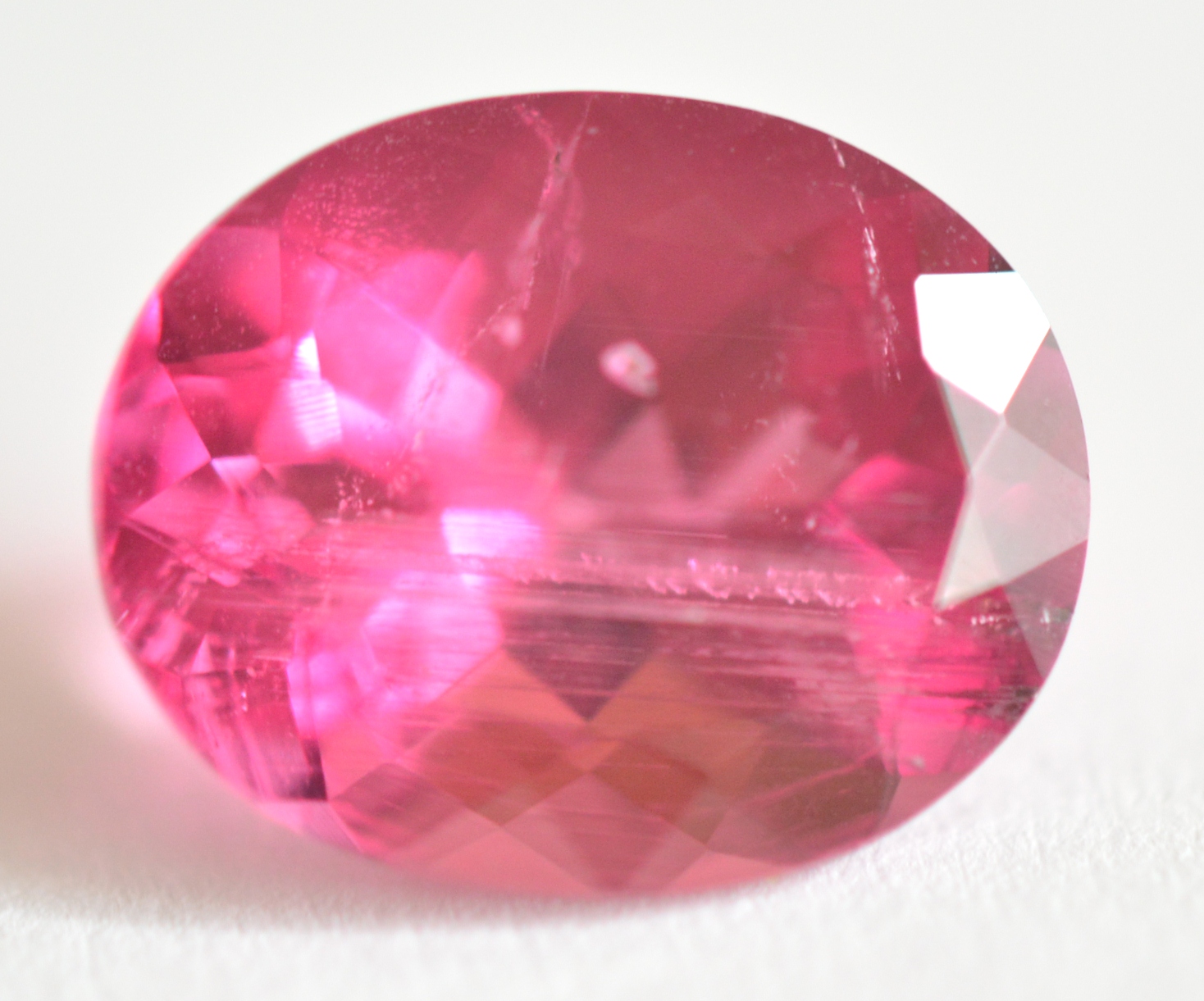 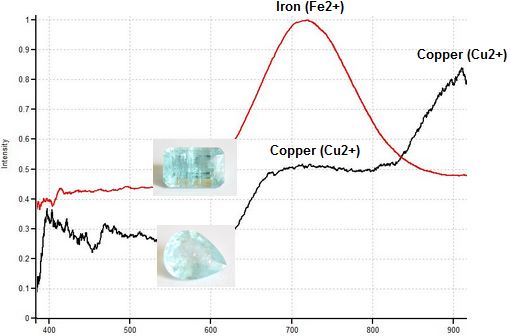 Copper-bearing Tourmalines are the only color variety of the Elbaite species that we have found to fluoresce under long wave UV light. Most Parabias in our study do not fluoresce, but some blue and light green copper-bearing Tourmalines fluoresce a weak to moderate bluish white color due to an unidentified activator. As we have already seen, Chrome Tourmaline of the Dravite species fluoresces red under long wave UV light due to chromium.

For our study, we tested 29 faceted copper-bearing Tourmalines (from Brazil, Nigeria and Mozambique) as well as a number of rough crystals. Rough crystals are mostly small and found as worn pebbles rather than as well-formed crystals in matrix. We verified all as true copper-bearing using a UV-Vis-NIR spectrometer to detect copper content.

Most Paraiba Tourmaline gems sold today have been heat-treated to highlight the blue or green color by eliminating any accompanying pink color. Heat treatment also lightens the blue color of stones that are naturally dark blue. Below is a photo of a dark blue Paraiba Tourmaline and light blue Paraiba Tourmaline from the Batalha mine in Paraiba, Brazil. Both these gems were cut from the same piece of rough, but only the light blue gem on the right has been subjected to heat treatment. Both gems are weakly magnetic, but heat treatment appears to have reduced the magnetic susceptibility of the manganese (Mn2+ & Mn3+) within the gem on the right.